Here's how I've done a 'living sketch' of a forest in GZDoom. My goal was to hide the blockiness of the Doom graphics, and make it look like a hand-made sketch.

If you liked the town I showed before, well, that was super easy compared to the forest. I mean, it was hard and extremely time consuming, but buildings are simple. Straight angles, nothing more. When I got to making the forest, I was scared I wouldn't pull it off.

After making the initial draft of the map, I knew I'd have to:

1. make the forest look lush like a real forest
2. hide the vertical straight lines
3. avoid making it an unreadable mess of lines

In a way, this proved kinda easy. But in just one way. In the town, in any building, I have to be precise. In the forest, the less precise and careful I am, the more natural it looks. But let's start from the beginning.

Please mind that what you see here is work in progress. There's still a lot to be done, and the final game will look better.

So, the #1 priority to me is making every screenshot look like a pencil drawing as much as possible. At first, the forest was supposed to follow the old PSX fps route, where there were these gorges which were basically corridors, and above them there were hedges etc. But this just didn't look right.

On the other hand, I didn't want you to be able to just go in a straight line between the trees, because that would've been just boring. So I made these 'corridors' between patches of lush vegetation, which is based on the pictures I found from Alaskan forests - where the game is set.

The challenge was to not overdo it. Too dense, and you lose sight from where you can go. In some places this is intended to throw you off. But, there are some subtle floor lines to hint where you can and can't cross.

Next, vegetation. I wasn't sure how much variety I'd need, so I just kept adding to one area until I was certain it stops looking copy-pasted and starts looking natural. I ended up with 4 types of bush and 2 types of grass.

I also have 2 types of trees. One has less detailed, smoother trunk, so it's a contrast to other vegetation. I'll probably reduce the detail on the second one, too. I wanted more types of trees, but really, it doesn't seem necessary at this point. Maybe later.

Also, I tried experimenting with 3D trees, but it went against the style, so I quickly dropped it. Another failed idea was fog, and tree branches creating a 3D canopy - I just couldn't make it work with 2D trees. 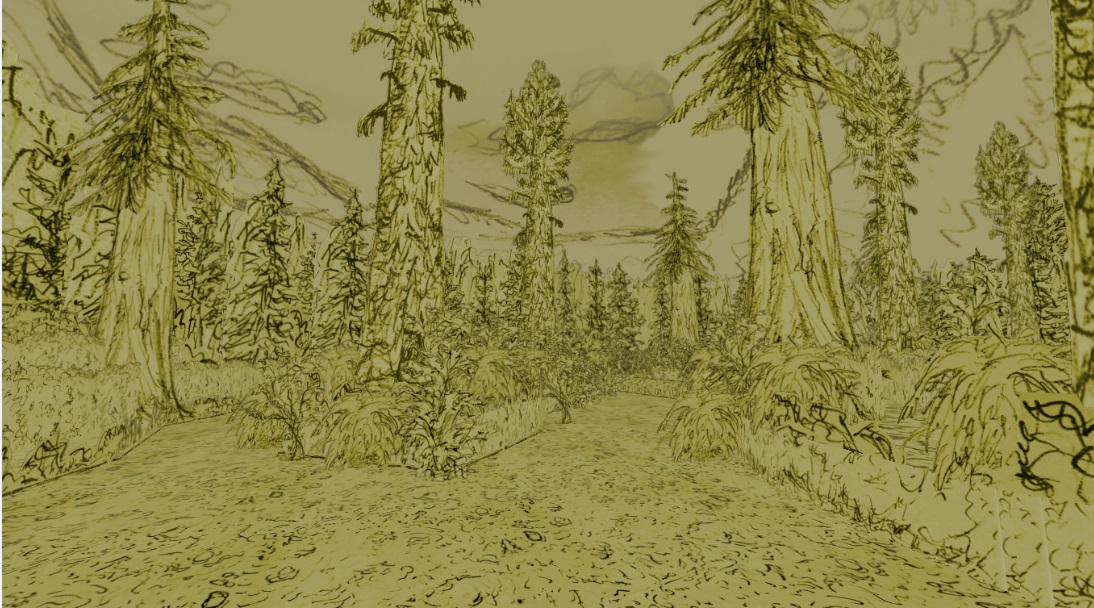 Now about the cliffs, vertical walls of gorges etc. It was my biggest worry but actually the easiest solution. Adding some mid textures with slopes helps to hide the blockiness in the distance. As for walls that you see from up close, I added a rocky mid-texture outline in strategic areas.

There's also the river, which still needs some work, but I'm getting there. I studied some river drawings and in general most artists use horizontal lines to highlight the distance. Since water moves, I figured these lines would be sectors moving up and down in a semi-randomized manner. Works quite alright.

So, here's the result.

I'm a total noob when it comes to design am I improvise it to get the effect I want. I'm sure there are better ways of doing it. I don't know them. But, if you like what you're seeing despite me being an amateur, that's great. Consider following this page for updates, or check out my Facebook.

Very unique :) I like your style and the forest looks great - keep up the good work!

I really like the art-style this mod is going for, definitely tracking this one! :3

wow, thats quite an amazing design

thanks, I hope it'll look better when it's done

Now, this is what I call art. Beautiful work, keep up!

He Came From Beyond, fps, horror, Doom, Lovecraft, hand drawn