You loved the zombie concept art - check out the models! Also, we'll be releasing the black and white concept art for one of our twelve characters every two days to our ModDB page starting now. Stick around and follow us!

Been a while, I know. I missed you. We've been busy! Last time around we showed you Hannah Böving's awesome zombie concept art. Today, you get your first look at the 3d versions put together by Bojin Shi and Alex Jupp. 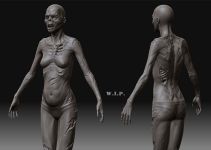 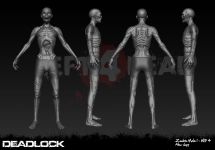 But the fun doesn't stop there! Stefan Hansson has finished the black and white concept art for our cast of twelve characters. We'll be posting one of these every two days to our ModDB page over the next few weeks. I'll start off with the farmer, as you've seen the color version already, and the first new character, our suburban male. 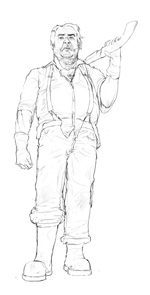 The characters don't have names yet. Designers often lament the process of naming things. In this case, we've opted to wait at least until the art was finished. Stefan has done a fantastic job of infusing very basic, mechanically-oriented character descriptions with personality. Eric Bellis and I have thoroughly enjoyed collaborating with him. I'm in the process of writing basic dialog for the characters now, which will take the characters a step closer toward realization as people. We may wait until after some voice acting is complete to pick the names. For now, you'll be stuck with "white guy" and the like.

In other news, we've picked up a talented young coder, Oliver Nelson. You can see him in our Steam group (Zebadee) switching in and out of "Deadlock" as he builds.

This is a very busy time for the team outside of Deadlock, with finals, graduations, and a confluence of commercial work. Nevertheless, we move ahead. On the horizon is Andrew's demonstration video of our "repathing" system, which will quasi-randomly enable/disable specific obstacles/walls on Deadlock maps to improve replayability and keep you on your toes.

NICE Zombies. Don't let anyone censor you I love your more true to life zombie models. Killing Floor got censored when they took out the "fully equipped" clot that was nude and that kind of angered me. I hope you don't let the same crap happen to you. :)

It didn't get censored. The team just came to an agreement that it was unnecessary. It alone might have effected many peoples decision to buy the game. It still has teh naked upper halfs just like this tho ;D

In other words, It got censored.

Why don't you complain that this zombies have boxers on ?

Difference to any of the other 1000 Zombie-mods out there?
I know, I like Zombies too, but for Pete's sake, this is Moddb, home of original ideas...or should be.

Haha truth. Zombies are going to be like WWII before long. Nevertheless, yes, Deadlock is distinct. Specifically, this is a PvP game - humans versus humans - occurring during the much ballyhooed zombie uprising/apocalypse. Two teams compete for finite resources in the midst of zombie waves that never end. The team with the last surviving player wins. This means you can attempt to avoid your enemy and outlast them through the waves of zombies, or directly attack them. Check out the forums for more. Deadlockmod.com

Wow that does sound very interesting and fun, I'll be looking forward to this