Devlog Update - how to setup a base cycle animation (at least for Boss 101). See the behind the scenes magic!

Posted by DonleyTimeFoundation on Mar 29th, 2015

How are you doing this week!?! Well, we hope!

Boss Animation and animation in general

OK – so let’s talk about animations in games. First you will have to understand a few points we strive for when we do animation. They may or MAY NOT apply to your animation needs so check these out and see what you think.

Guidelines for basic cycle animations:
- The first and last frames should be the same!
- values for things like movement, rotation and scaling should, for the most part, ALWAYS move in a Sine wave.
- Slow and even animation generally works better then quick stuff over time when doing cycles. There are exceptions but when you do a cycle you probably are doing to add flavor. Like any flavor too much of something can be overpowering! HAHAH! Like that comparison?! You’re a cook!

Let’s Jump straight to the final image of the moving tail with a little pipe thingie opening and closing to give you an idea of where we are heading. Notice the segments all move one after the other. We’re just doing an idle here so the thing isn’t flailing all over the place like a flag in a hurricane.

Ok Here we are – first setup image. We can see the basic setup for the boss body and his tail. We are using the program Spine (Esotericsoftware.com) but this is applicable for any animation you are doing in any program. The thing we are going for a is a smooth up and down motion for the dino tail. Remembering this is just one part of a LOT of moving parts we can get going with basics of the animation. 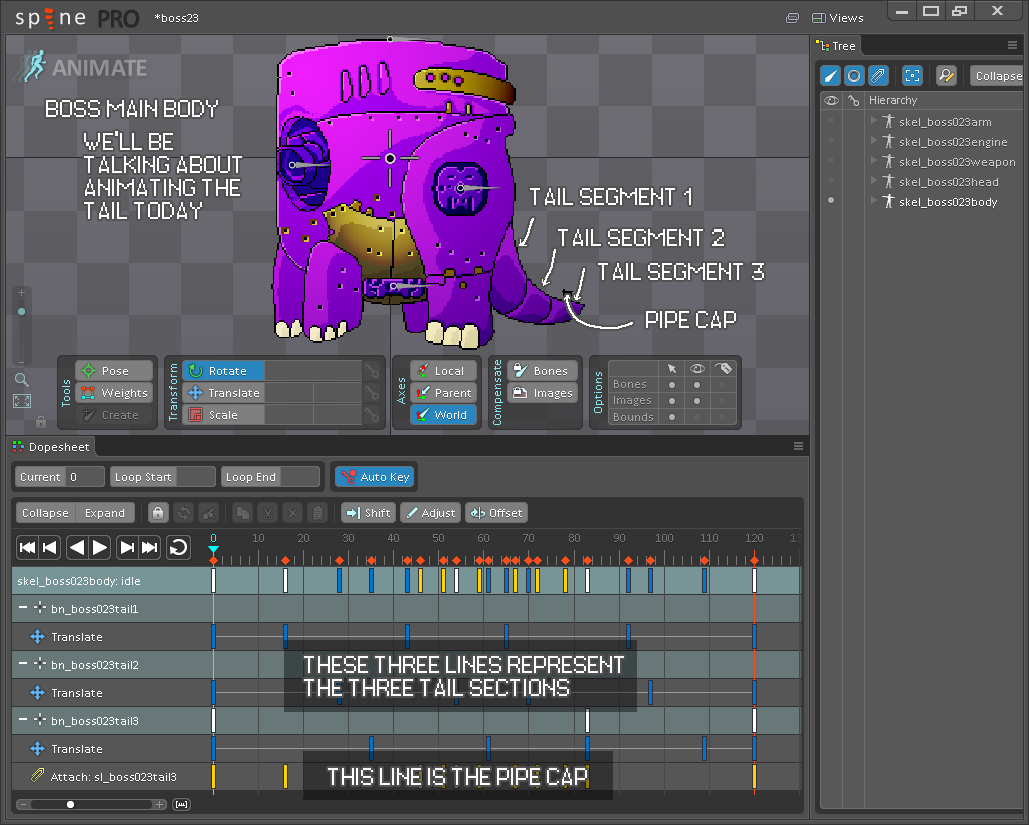 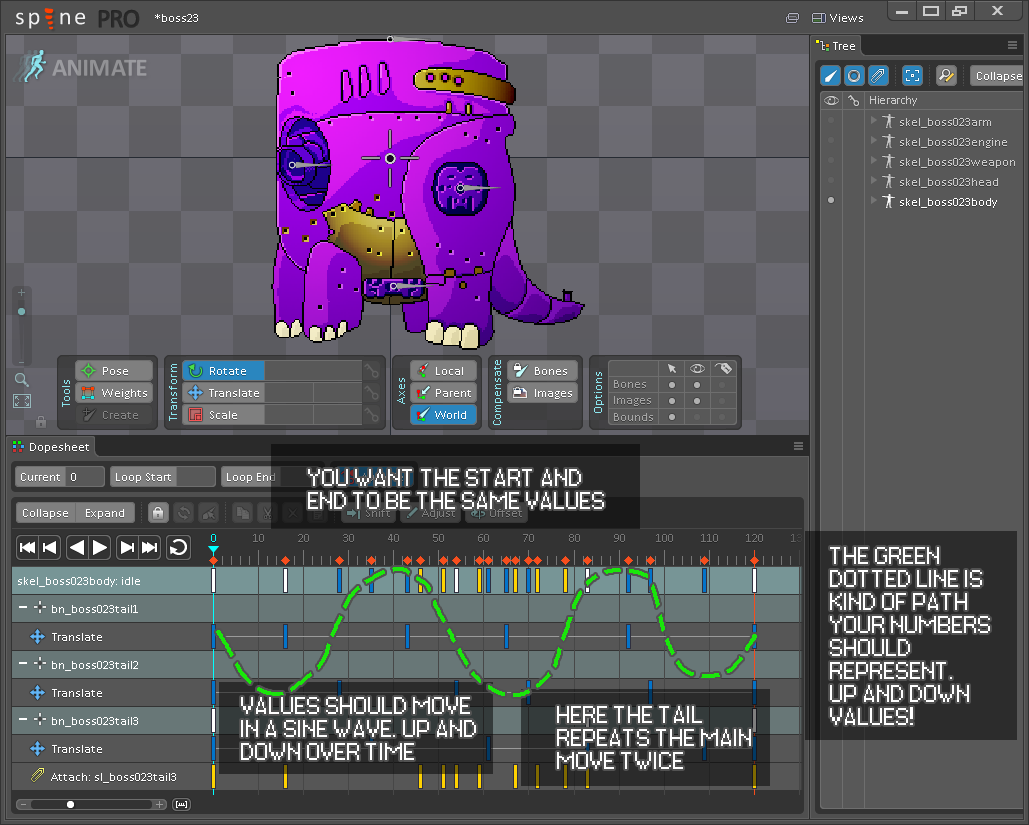 You see the magic there?! That is straight animation and it looks good too. Please understand the SPIRIT of what I am getting at here and not the literal values you are looking at. It’s time for the use of your IMAGINATION. Let’s IMAGINE you are an indie game developer and you have hundreds of things to animate. Well, are you going to sit down and mo-cap out a bunch of dinosaurs? Probably not. What you want is some magical way you can layout a bunch of animations to look good and pro. Again, generally speaking think of most creatures and even mechanical things in life. They move in sine waves – back and forth and reset.

For a lot of the basic animation you will likely be doing this will be some SWEET looking stuff. The things you will want to vary when you get down to individual pieces, creatures and the like will be the spacing between frames and the values of those peaks and valleys of the sine wave.

About the way I am using the term Sine Wave – this is just my shorthand for a series of animation values (rotation, scale or position) that change up and down (or down and up) over time.

Then we move to this final bit. Since there are three tail section and we want a whip like motion. All we need to is offset the animation in the rows by a few frames. We did the same kind of animation in each row and then shifted that animation over to the right for each subsequent section. 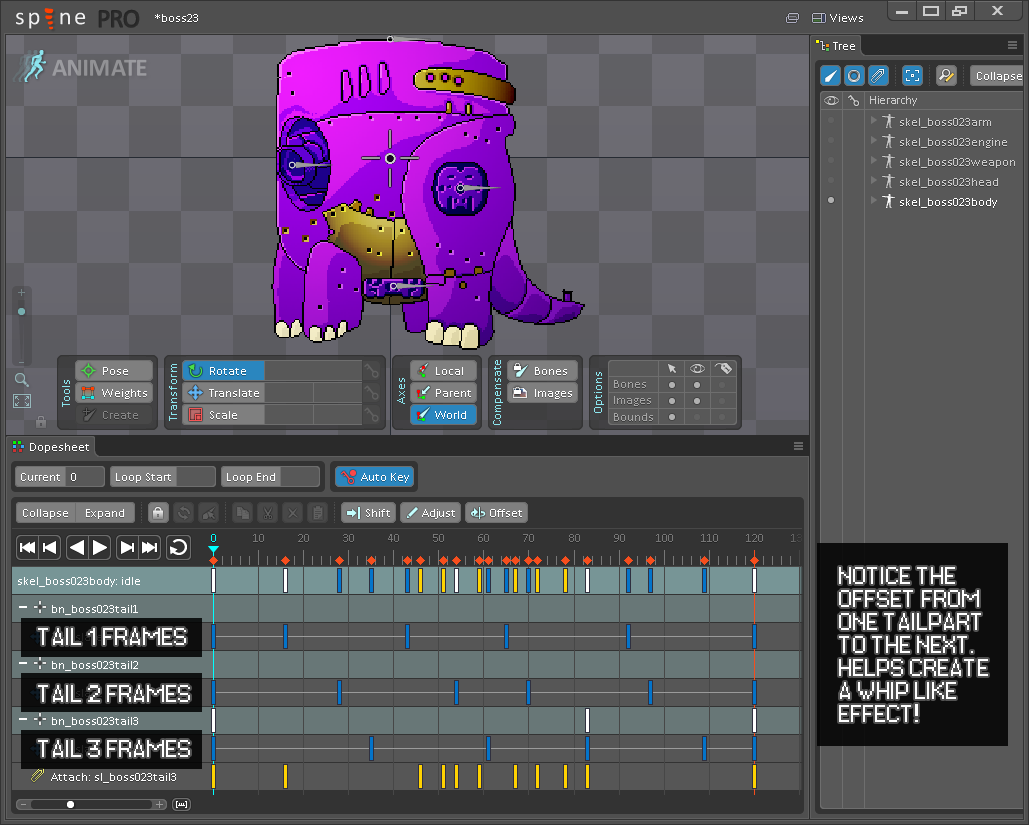 OK- that is a lot to digest so let’s move to something else for the moment!

We added two new hats to the Boss 101 lineup in honor of the site ShUMP site (Shmups.system11.org). Their EXACT abilities are still being tuned but the current plan is they will make your character (well, S.T.E.V.E. and Max) into more or less traditional ShUMPS type player vehicle. Among the things we are thinking is both these hats will turn off the life bar and possibly a few other things (might even include modification of player movement and shots).

Thanks for reading and your support! We do listen and read all your mail and comments!

Remember to always – LIVE YOUR DREAMS!