The Boss 101 weekly update. Greenlight talk, game Modes and... rock pillars from the GROUND! Read on!

Posted by DonleyTimeFoundation on Mar 11th, 2015

Hello again and welcome back to another Boss 101 development update!

This week we're talking about a few things - one being our Steam Greenlight is almost here! And when I say almost here I am talking about within a week or two! That's pretty exciting for us and when we flip that switch we would love you to take a look and give us a yes vote. 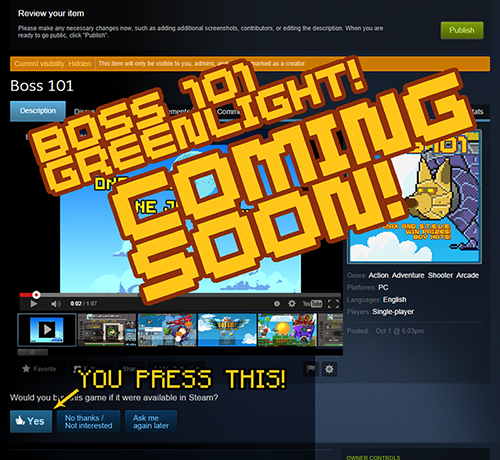 Your support means a lot. We get mails and questions about the development process all the time. From my perspective (Tim) this game has been hugely rewarding to make. You know why? Cause it's FUN! Great team, game is fun to make and fun to play. The goal now is to let you in on the fun and give YOU your money's worth. First step - let's get on Steam Greenlight with your help and head into the final stretch.

Progress has been AWESOME in the last few weeks. A lot of bosses are getting a tuning pass with their weapons. We have shots below!

One of our bigger boss weapons can toss up crazy rock pillars to block your progress. Why does he do this? We think it has something to do with a lack of hugs. Regardless - if you have the right weapon you can make short work of these obstructions - see...

The other thing going on is a lot of bullet coding. Bosses are getting side weapons tuned for maximum madness. Each one of these little devils has his own pattern. For instance...

Check out this guy - this particular main weapon gives any boss FIRE BREATH!

Game Modes in Boss 101:
You might have been wondering what KINDS of game modes are in Boss 101. We got that very question this week and here goes with our answer.. I'm reposting from the AWESOME SCHUMP forums at shmups.system11.org. Totally recommend that site for serious shooter info.

Here are a few of the things on the list. these are all scored or tracked in one form or another.
- Base game with progression through 32 levels/rounds (this is basically the story mode)
- We also have (for lack of a better word) escort type missions where you will be taking shadow ship along and have to keep it alive.
- There is another type of mission we have called chase missions where you are literally following the boss as he warps from level to level. When he goes to warp you will have to "knock" him out of warp tunnel before you can resume the regular fight.
- Endless Boss mode - this is you with one life seeing how far you can get against an endless array of bosses. The idea here is you keep going against random bosses until you die
- Quest-type modes - these are modes that will reward players for things like (but not limited to) completing rounds using certain weapons, not dying, beating a round in under a certain time, high score per round, high scores per game, overall time per game, etc

Modes we are considering (and have the underlying tech for) these would also be scored or tracked in one form or another.
- An object quest mode. The idea here is we scatter reward object (hats are sort of our reward-of-choice) in each game round. During the round you can perform a very specific action within the round (something like beat 20 minions in 20 second) and an object appears for you to grab. From there on out you need to stay alive for the rest of the round to keep the object.
- Builder Mode for Bosses - so most of the time you roll randomly in the Make-a-Boss room but we have talked about allowing players to build EXACTLY the boss they want to fight. This mode would be outside the story mode and would essentially allow you to build ultra hard (or ultra easy) bosses out of specific boss parts to fight. Mostly it would be about bragging rights to your friends to say "Oh I built a Tyrannosaurs, Spida-Bear-aSquito and beat it with a PISTOL!"
- One Hit Mode - you have one hit point and that's it. This could be a sub variation of the Endless boss or any of the other gameplay modes really.

As you may already know - I'm writing a weekly series with my thoughts on game making at the Indie Game Riot website:

An excerpt from this week's topic - picking a subject for your game...

So when picking a project, look at the games you like. Games you are interested in. Don’t be daunted by the size and scope. Maybe you want to make an MMO, or a game like League or Legends? That’s OK. Start with that and realize you will have to setup realistic goals and scale the game to your team size. Don’t expect to make World of Warcraft by yourself in this lifetime. You might be able to make a sample of that game and you surely could gather a team to make it, but create a giant MMO all by yourself? That’s pretty lofty.

Basically, picking something you love will allow you to soldier through all the tough times ahead. I was reading a book about motivation the other day and it had a fantastic passage about fears and uncertainties. It stated fears and uncertainty are a form of resistance. It went on to say they are good since they normally point directly away from what you should be doing. Want to fart around instead of working on some coding? Guess what you probably should be doing? Coding! Feel like reading a Facebook article instead of that animation you were working on? Guess what you should be doing? See how easy it is?

One thing to remember as you sit down to make your game is that these things are fluid at first. Games will reveal themselves to you over time. You need to allow time to find the real game you are making. Hold the concept in your head and use time and effort to chip away and make that concept a reality. I found out long ago no game comes to me fully formed. It’s mostly a couple concepts and some ideas about “game moments”. From that, I build a game and allow a very organic growing process to happen. I try not to force the game this way or that. Instead I set up the base parameters of the game and let my work and iterations reveal the game I was intending to make. Nine times out of ten, this is faster and results in a much more fun game for the player.

Allright - big update and PLEASE STAY TUNED for more on the game as we head into the Steam Greenlight announcement in the next two weeks!