The Boss 101 team takes you behind the scenes where the magic is made! Weapons, dog rockets and more!

Posted by DonleyTimeFoundation on Feb 22nd, 2015

Hello and thank you for stopping by!

This week we're kicking it off with another behind the scenes look at the way we make our magic. (or at least a peak at it!)

We start with a basic discussion about what a boss will act like, how he will behave. Things like movement, weapons and personality are discussed and planned out. Of course it all needs to work within the games framework of interlocking parts.

Let's look at the Dog Boss - here is a look at the first pass of the dog's main weapon planning diagram. We layout the way things work with some sketches and notes. 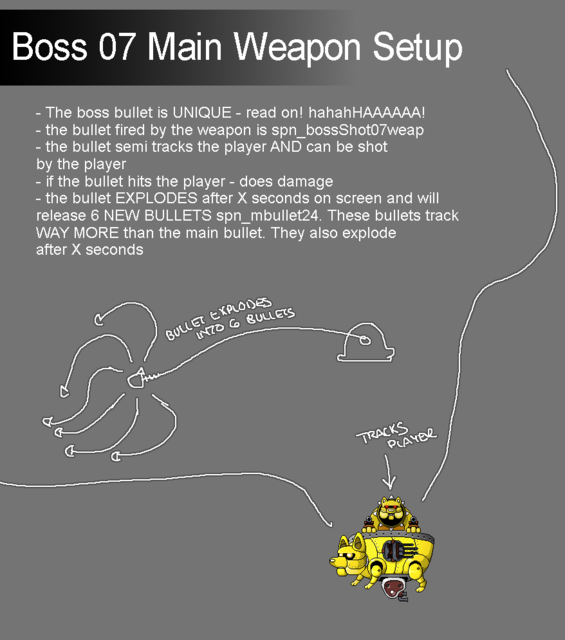 From there it gets a working first pass... like so...

When it's in the game we start playtesting and seeing how it feels along with other boss combos, player weapons and basically everything we can think of. I have to say it's pretty fun to watch something come online the first time and just blast away at it. There's nothing like horribly imbalanced weapons to get the blood flowing!

Arm Weapon Setup in Boss 101
Then you have things like the arm weapons... the little one on the shark boss right here... 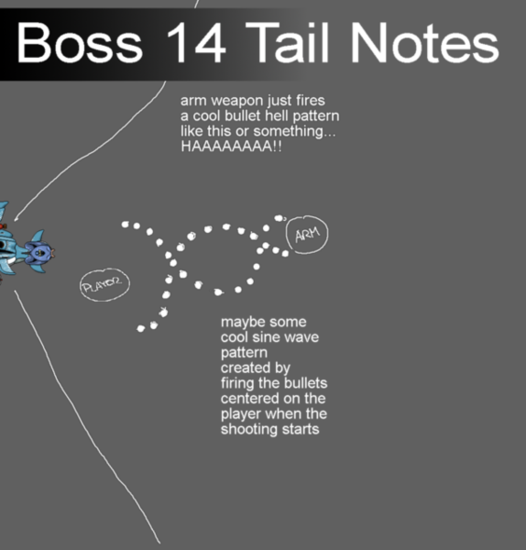 Those notes became this!

Pretty dope right?! That's the kind of fun we have all day!

Setting up and Art Team (or any team really)
OK - more coming but check out this little bit of development blog magic I wrote up regarding my thoughts on how to setup an art department. (this was asked in regards to my time spent at Black Isle on Planescape Torment)

First, I would start with the very basic ingredient of ANY team – which is passionate people. That sounds trite but you want people who believe in your project working with you especially since the smaller the team the more a “true believer” will affect the work as a whole. I’m basically talking about someone who is excited and you personally feel you can get along with. Believe me, you will know this person when you meet them. The flipside is if you have someone on the team who is disagreeable or who tends to subvert the goals of the group then it’s in your best interest to remove them as quickly as possible.

OK – with that out of the way and assuming you have a small group of dedicated people then the rest is a LOT easier to manage.

Department organization – some thought in no particular order (from my time on Planescape and Neverwinter Nights 2)
• First and foremost try to put people on work they WANT to do. If someone loves characters then they should be ideally on characters. If someone loves backgrounds then put them there. This will require you to shuffle people around to let them see the various departments and jobs inside an art team but it can be worth it. Sometimes everyone says “I want to be a character artist” but they discover they are really good at UI or something else.
• Always appeal to the greater project when getting people to do work – at all times you should frame any job as it impacts the whole project. In other words – how will texturing this house, modeling this character, animating this scorpion, etc help get things done. If YOU don’t know how it affects the project then DO NOT ASSIGN it until you do. Project management mistake #1 – handing out ‘assignments’ with no sense of the bigger picture.
• Allow people the freedom to do what they want but make sure they do the job asked first. ALWAYS allow people to suggest changes and even implement things on their own. They probably have better ideas than most since they are the ones working on it. However I would say it’s equally important to make sure they do the work asked first BEFORE they do their own thing. It’s a very fair system.
• Be prepared to change the task if one of the workers points out something ridiculous, futile or time wasting about it. Ever hand someone a task and they make a funny face? There’s probably a reason they think it’s stupid – find out why and do so with minimum disruption.

Art Directors duties (a semi humorous but accurate look)
- Cheerleader – getting the team to work together and in harmony. This is your number one job (well, TECHNICALLY the #1 job is to turn a profit right? haha)
- Garbage man – there was a term when I played basketball in high school lo those MANY years ago. We had a guy on each side called the “garbage man” his job was to take all our junk and put it in the basket. Our crappy shots, passes and all that shiz – he grabbed it and turned it into points. What I’m saying it the art director should, in most every case, never work on primary art for the game (this is dependent on team size of course and layout). He or she should be working on the stuff no one else wants to do an making sure that is of the highest quality. Turning the garbage jobs into points as it were.
- Tracking the project – at all times the art director needs to keep their eye on the goal of the game, watch the tasks for progress and above all make sure all work is relevant. This will mean course correction at times but it will have to be done. Any task which becomes outdated or irrelevant should be stopped immediately – avoid letting people finish ‘just because’ unless you are fairly certain you might use the work. People catch on very fast to busy work and will throttle their productivity accordingly.

Last thoughts
One last screenshot to leave you with for the day. The future's so bright I gotta bust meteors....

Talk with you soon and LIVE YOUR DREAMS!