Max, STEVE and you coming into 2015 together! What do you do when you see a sword at warp speed? SHOOT IT!

Posted by DonleyTimeFoundation on Feb 8th, 2015

Been a busy week so let's check out the latest developments.

You can now chase bosses through warp portals and take them down while in warp space. Of course this might toss you out somewhere you aren't expecting.

As always - we want to give YOU the best game possible which means gameplay, story and overall entertainment. There have been a lot of posts about the game's look and we have not forgotten about the story of Steve and Max. Without giving too much away Boss 101 will give you a look behind the curtains as to why the guys do what they do. Who were THEIR influences? Who do they look up to and why? Is this stuff important? We think so and we feel it will give you a lot more reasons to root for them when you know how they arrived.

That said - there will always be the smart-alec robots and funny quips (mostly since STEVE isn't going anywhere).

So if you see a warp in space like this:

Then you move on in:

You might end up in a warp tunnel blasting samurai swords!

Hey, no one said it was easy being a kid with a jetpack. Actually, maybe they did and they of course lied. HAAAAAAAAAAAA!!

We're jamming on the bosses for the game. As you know there are MILLIONS of boss combos and each of them has their own weaponry and patterns. The best part is you won't know what's coming till you roll the boss. One of the most fun aspects is just making them 'do their thing'.

In the web version bosses were scaled for browser based gameplay but MAN - this time around it was a number one priority to make then be far more bombastic. Cooler VFX, more pixel resolution and animation. Check out a preview of some of the craziness! 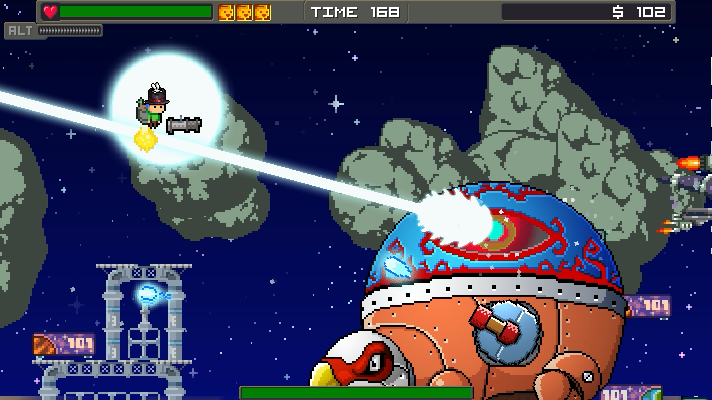 Bonus Time: A look at one of sweet outfits you can get in the game... this one is called.. Kill Who?

Also - get ready for the Steam Greenlight - coming soon and we will need YOUR vote. Thanks in advance for your support!

Part 4 of my Making a Game Article is up at Indie Game Riot!

Finally, here's a sneak at the latest in the next article of the series with a focus on getting help while you work on your indie game...

Working with people as an independent gamer

You need help even if you are alone. No one makes a game all by his lonesome. Not the guy that did Cave Story, not the guys making Missile Command in the 80’s or the guy that made Pong 10,000 years ago. They used programming languages, machinery, electronics and probably had a lot of ancillary help getting various things done. No one, please here me, no one gets far in this world without other people’s time (OPT) or other people’s money (OPM). You might need both during your game development sojourn. I’m talking about forums for programming, sound and art. I’m also referring to local game developers in your town of perhaps developers you can talk with via email or Skype. Reach out to people doing what you do – heck just reach out to people. This is game development and it’s the 21st century. The people out there you admire have scores of help working with them. You should too! Reach out and make contacts about various aspects of gameplay. If you’re strong in something – maybe you can help. If you are weaker on a subject, then it’s your time to ask for advice. Which leads to…

Getting help. Something most people forget is the easiest way to get what YOU want is to help someone else get what THEY want. I won’t even bother to validate that with examples since you know it’s true. You’ve used it thousands of times in your life in many ways. What you really should be doing is helping others while you are making your game. I know that seems to contradict progress but it won’t. In fact it will probably accelerate your progress since in helping others you will open up doors for yourself you didn’t know about. Strange but true and I can attest from firsthand experience this does work.

As always - Remember to live your dreams!