Each week we bring you the latest news on Boss 101. Check out the progress with STEVE and Max as your hosts. Sure, we step in when they get out of hand - which is pretty much every single time.

Posted by DonleyTimeFoundation on Oct 18th, 2014

How do we go about finding all those wonderful bosses we fight? Well, we have this SWEET map room the boys go to plot their adventure! Check it out – better yet – let them tell you about it!

That’s right folks – you get the WHOLE picture with the Boss 101 Command Center and GUESS WHAT?!!? it’s all yours from the get go. You’re the superstar! Well, we do have a few upgrades you will want to get before you go knocking on Boss 101’s door! 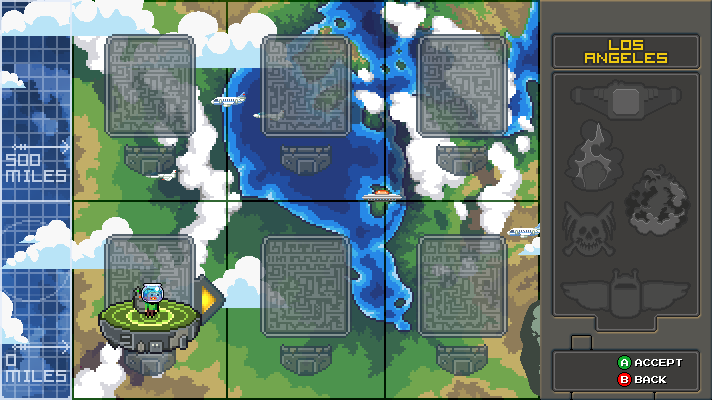 OK – you may already know all about the fabulous Boss 101 Make-A-Boss where you generate all the NEW bosses you fight each round but maybe we haven’t told you yet about some of the OVER-ARCHING ideas we use to guide us whilst we whittle away making magic. To that end – let’s talk about some of the basic principles which go into EACH FRAME of animation and EACH LINE of code in boss 101. We talk a lot about fun but what does that mean for YOU exactly. Here is an example:

Humor – you probably guessed this one already but it’s a biggie. We want to introduce you to STEVE and Max and we do a lot of that with their interactions with Bosses and each other. Our MASTER ENGINEER has devised a new and much improved dialog system that allows all sorts of HIGH-larious interactions with YOU, with bosses with STEVE and Max and even ROB. Bosses can have last gasps as they die, STEVE and Max now comment on the bosses as they are being made, we have a new dialog balloon system for in round and Command Center interactions. ALL THIS is designed to give you a direct link to the humor – both real and imagined inside the game!

Variety – You mentioned you wanted as much variety as possible within the bosses. You wanted MORE weapons, more weapon variety and more types of attacks. YOU GOT IT! There are nearly twice as many boss bodies in this game and each one has its own brand of attacking, defending and general AI pattern. In addition – there are MORE boss parts now too! In Boss 101’s web game there were three boss parts with practically no animation – Now we have FIVE major boss parts with hundreds of frames of animation on nearly every boss. Why?!?!?! To give the boss character and a bigger sense of personality!

Collection and Collectables – related to the above we wanted to reward the long term player with stuff to find and REASONS to find it. Hats are the basic collectable and they will be found after completing sets of tasks from the Command Center. You might also find a hat during a round, you may win one from an arcade game in the Command Center! The reason and POINT of the collectables is to give you something for your time. They are needed but they are there for the player who dives in and looks everywhere and experiments with the game. Oh, and if you don’t want to do ALL the hard work then feel free to ask your friend who did. Maybe they will point you to some of the secret areas!

That’s the just the TIP of the BOSS-berg! Stay tuned over the coming weeks as we show you more of what is IN the game!

As always – LIVE YOUR DREAMS!