Happy New Year 2010 to everybody ! Yes, this is this time of the year again. In this update, I will come back on what happened in 2009 and about the recent ( lack of ) updates. Stay tuned !

As you may have probable noticed, there hasn't been as many updates in 2009 than in 2008 ( or in the previous years). No, the project isn't stalling and/or dying. Quite the contrary in fact; as we already explained in the past, dev journals and updates were frequent because the engine was getting built and prototypes were experimented. 2009 Has been the integration year. A lot of systems have been implemented and integrated together, but didn't result in anything spectacular (or even screenshot-worthy).There was definitely a lot of work accomplished during 2009. Let's speak of the programming side first.

The client/server code is finally starting to shape up; don't get too excited: it doesn't mean that the game is currently in a playable, or even alpha state. We'll need many more months before that happens. But the network architecture is in the works, and as you can imagine, for a MMO scalability is a key point. InfinityAdmin has also set up the databases or the event recording/replaying system. The client can automatically download and install patches, and some server administration features (like bans or logs) are working. Don't imagine anything fancy, there's no GUI yet, but the key point is: the basics are here.In 2009, InfinityAdmin has also started to implement the procedural galaxy generation on the server side and rendering it on the client side. He hasn't spoken about client-side rendering of the galaxy yet, but he'll develop it in a future dev journal.
A new version of ASEToBin, with tons of bug fixes and new features has been released. InfinityAdmin has experimented with deferred lighting on the client side, and that pretty much confirmed that we will use it for the final game. Lots of shaders (particularly the planetary shaders) aren't compatible with it yet, so that's something he will have to address in 2010. In the recent months, InfinityAdmin has also started working on input handling (joysticks) and input mapping (storing the keyboard config in an XML file). He is currently in the middle of implementing the engine's windowing and widgets system. No GUI for the actual game yet, but prototypes have been presented by some contributors (Zidane888, Junaum , SpAce), and I'm pretty sure that the first in-game GUI and HUD will be implemented in 2010.
After the GUI systems are done, InfinityAdmin will probably come back on "silent" client/server work and on the camera/controls systems ( improving the ICP's ) with a functionnal HUD.
USNavyFish has made some good progress on the economy prototype . We have faith that he'll eventually release the program and its docs soon in 2010 :)

A lot of good contributions in 2009. The quality level has risen up and the number of models waiting to be textured is going down, thanks to Altfuture, SpAce, Zidane and Juan. A noteworthy mention to many of our Chinese contributors too, who are starting to texture or normal map their models; for example, Bahamute.Kickman's new shuttle.

A lot of amazing concepts and models have also been submitted in 2009. Sparlin and LucasFin did a very nice job on managing or providing concept art for city buildings and NPC vehicles ( warning: massive threads ! ).Of course, many other people did some excellent work, but it would take too long to list them all here. If you're interested, you can check out the contributions forum's first 30 pages , for all that has been submitted in 2009.
The faction styles are getting refined, and we are happy to say that more and more people have now a good understanding of the faction's look & feel. On the modeling side, we're still suffering from a gap in contributions count: Centauran ships of all sorts and sizes are still severely lacking (we have almost no large-sized Centaurus ship). Deltan and Star Fold ships are more balanced (although more SF ships would be welcome), but most of the ships are Deltan military ships or Star Fold industrial ships; I'd like to see more Deltan industrial ships, and more SF military ships. And most of all, more civilian ships and liners, for all factions !
Another area in which we are lacking are texture packs. The main news in 2009 has been the release of SpAce's Star Fold texture pack , but it only contains a handful amount of textures. We need more, for variety. And we need more packs for other faction styles, too. 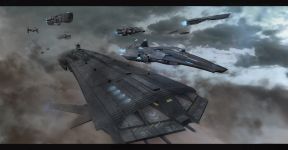 There isn't much to say in that area; some good contributions in 2009, but in lesser quantity than in 2008. Nothing critical for the project, as we've already had tons of good submissions in the past years. Of course, the more choice we have in the end, the better. Noteworthy mention of Kaiyoti, Altfuture, Mirrored, Nutritious, Atw, etc.. We are also 'watching' Pendrokar's work on sounds FX.

Crayfish has taken over the lead of the storywritting team, and some progress is finally done in that area. The organization and management can sometimes be painful, as making a dozen people from different countries collaborate on the same project is no easy task and requires some serious discipline from everybody. We've been experimenting Google Wave as a collaborative tool, with moderate succes.

Seems like you are getting bogged down by Infinity at the moment. There has not really been many updates at all since summer. I hope you manage to get some new media out soon. Looking forward to maybe playing this one day!

Oh and awesome effort on all the work you are putting in. Good luck for 2010.

gentlemen, today we have made progress.

Thank Darwin there is a media update. I love this game. One day, I shall propose to her.

Keep up the excellent work.
Personally, love the programming portion - even though I am more strictly website development - software programming is just, if not more, intriguing.

Happy to see progress is still being made. This is still one of my most anticipated games, indie or otherwise.