The first in a series of previews showing what new and improved content you will be able to experience in A Clash of Kings 2.0. 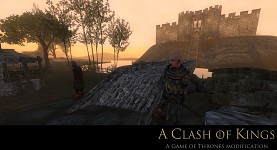 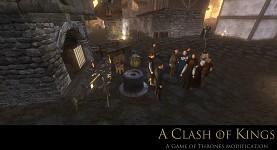 With the new worldbook, A World of Ice and Fire, having been released, I'm currently integrating all the new information into the mod. This includes more cities for the Essosi factions, new names for many locations, new names for many Essosi characters, and a couple of new cities for the Westerosi factions. The worldbook also included some maps with a bit of new information regarding castle/town placement and rivers, so I am also doing various map changes. 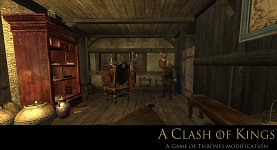 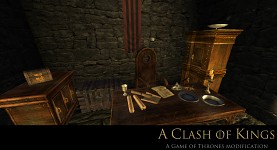 On top of that, I've added a lot of new props. These props are all very high quality, and will be used for ACOK, but also for ACOK II.

Like with the commisions from Docm30, these props where paid for. It's part of an ongoing effort to put the many donations ACOK has received to good use. The next batch of commisions will include many updated weapon models, like a new Arakh model, which will be useable for ACOK II as well.

Many of these new props are great for overhauling the interior scenes, but there's also many small props which are a bit more specific. One of them is going to be used for a quest. 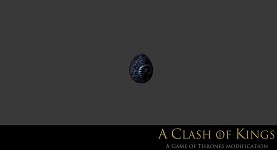 As always, new versions of the modification will also contain many fixes and minor tweaks. The changelog can be found here: Moddb.com

I'm currently focusing on minor convencience fixes, getting hold of the remaining few bugs and polishing up the factions and map. Once that is done, I'll finish work on the new diplomacy system (mostly implemented already, just have to test it) which will make the world a lot more dynamic.

When you say ACOK II do you mean like Bannerlord ACOK or did i misunderstand?

was that an answer to bannerlord o misunderstand?? :P

Thank you Cozur. I, and I'm sure many others, really appreciate the effort you put into this mod. Your attention to detail is so great; I can't wait to see all the changes that AWOIF has spurred on. Keep on being awesome.

Great mod, only thing that hurts me is character design (especially for Lannisters) and item balancing :-) some helms protects you less than some mail coifs.

This is beautiful. I'd pay for this mod instead of buying that Viking DLC they announced..

I can't wait for the next update!

And what about the Wall? Or Castle Black?

Will the 2.0 update fix the crashes that happen on mac and linux?

Am i the only one who wants to buy Bannerlord just for ACoK II?

Nope! Bannerlord will be cool I'm sure, but ACoK II will be amazing.

Is there a release date? Or some thoughts about when to release it