A deep look into the brand new and remastered Master AI, with dozens of new events and a brand new, complex storyline, with a new consequence.

It's been quite a while since the last dev diary. Development has indeed been slow for a while, not only due to being busy, but also due to a decrease in the "want" to work on the mod.

But for a few weeks now, work has resumed, and it is planned that before the major 1.4 update planned to come out near to August/September time, there will be a large update: the 1.3.4 update.

Although few areas will be affected, much new content will be added, with:

...and this will all be included in the brand-new Master AI!

I was always very disappointed with the outcome of the old Master AI chain of events, the one which you all have access to now. Not only is it quite uneventful, quick and unbalanced, but it's built up to this idea of a "strong AI, with possible lethal repercussions". And all it does is increase the chances of the Contingency and an AI Rebellion.

But no longer! Now, it will be much more rich, and there will be a brand new, not seen before consequence, one that truly has a right to be called a lethal threat.

Remember that all numbers and pictures are not final and are subject to change.

Getting the Ascension Perk

However, I wanted the ascension perk to be accessible at around mid-game onwards, meaning high-tier techs couldn't be used as requirements, and I couldn't introduce too many new techs. 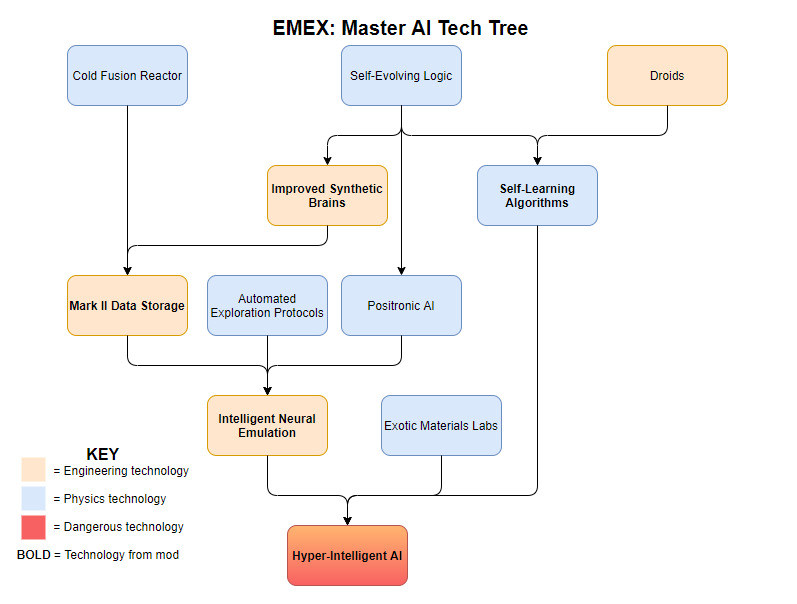 The Hyper-Intelligent AI tech itself still is considered a dangerous technology, as it still does increase chances of the Contingency appearing, but it is not as potentially dangerous as the ascension perk.

The simple, static effects of the ascension perk have remained the same mainly, meaning that a small bonus to computing techs is still provided, alongside an additional research alternative. The potentially dangerous effects however, are now also mentioned so that the player is aware.

After choosing the ascension perk, you will get an event like previously to begin the special project to construct the Master AI. However, now this project only builds the basic framework of the Master AI, meaning there is a part two to its construction. 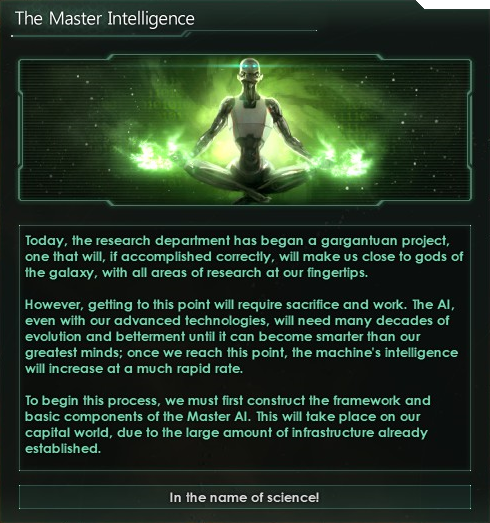 After building the framework, your capital world will gain a small planet modifier, which provides a minor boost to researchers.

Furthermore, a megastructure will be constructed in orbit of your capital. This is where the Master AI's core will be, but after the special project, it will only be a simple, spherical frame, very similar to phase one of building a Dyson Sphere.

Phase two of the construction period, after building the framework, will work slightly differently than usual. 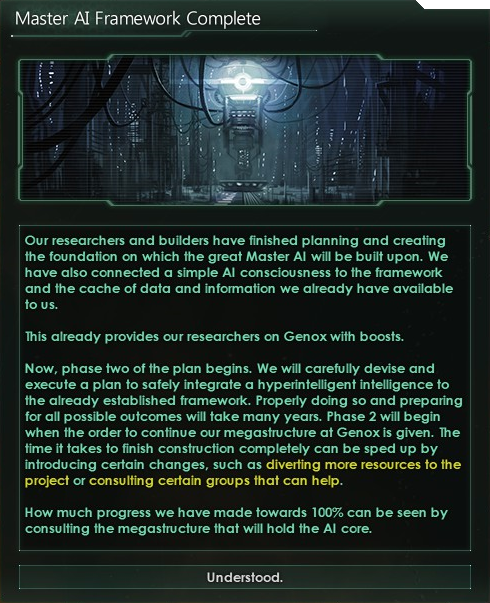 What this effectively means is that although phase two will begin when you select the option at the megastructure's UI, you can enact certain edicts, planetary decisions and more to speed up the construction process.

These are entirely optional however, although it will take 10 years to finish otherwise.

Also, the small planet modifier on your capital will be replaced by a slightly stronger modifier, although it will also increase researcher upkeep by a bit. The megastructure also passively provides 25 research of each type. 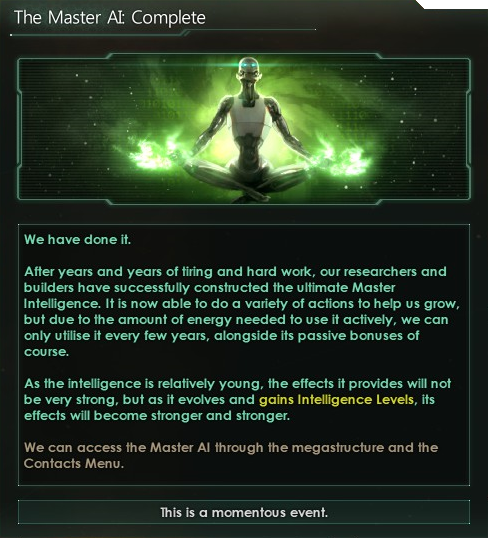 Not too much will be revealed about what uses the Master AI has and how it does them, but we will still mention them.

As seen in the event shown above, the Master AI can gain Intelligence Levels. This variable determines how strong and effective the actions carried out by the Master AI will be, and also how likely the stronger ones are to be chosen.

The Master AI gains between -1 and 3 Intelligence every month, but the total number can be further increased with a variety of edicts, technologies, random events and more. 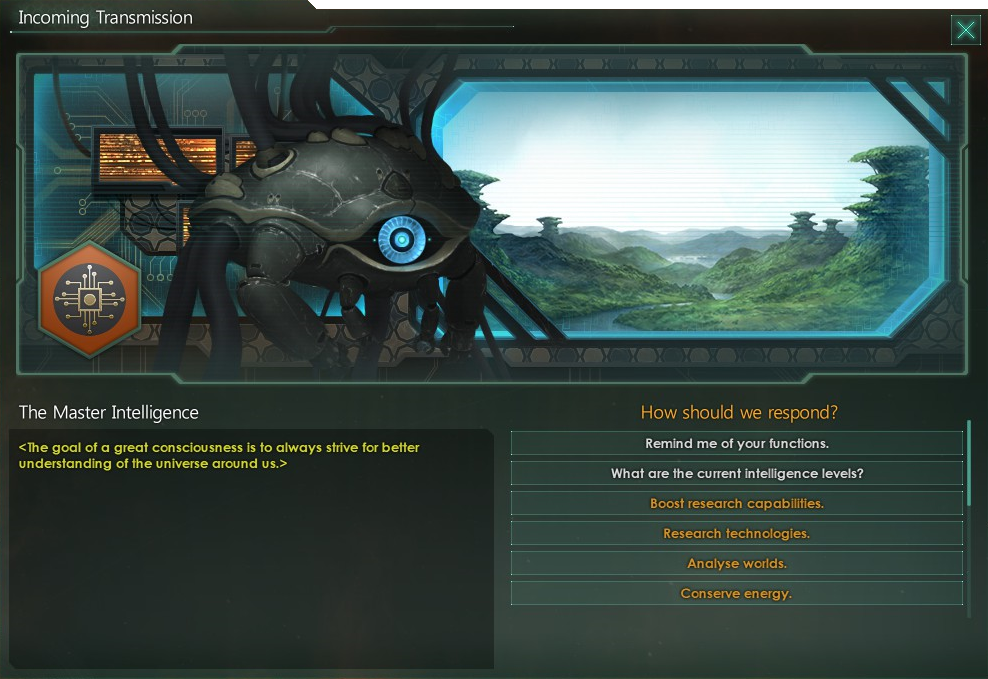 We will go over the general effects of the highlighted options (in orange).

This option provides one random modifier out of a possible five; they all affect various aspects of your research. The strength of the modifier increases as the Intelligence Levels of the Master AI increases.

This option researches three technologies (one physics, society and engineering) to a certain percentage. Again, the amount that is researched varies as the Intelligence Levels increases.

This option works very similarly to the Surveyor relic. A random planet/celestial body within your borders will gain a sizable deposit of either energy, minerals, alloys, research (any of all three) or certain strategic resources. The amount that the deposit provides increases as the Intelligence Levels increase.

This option can be more viable if you are low on energy credits, as all the other options require a large amount of energy to enact. When this is selected, the Master AI gets a small increase in its Intelligence Levels.

All of the above options will result in you gaining the "Recent Master AI Action" empire modifier in addition to their effects, which will prevent you from enacting another action for 5 years. The modifiers from "Boost Research Capabilities" last 4 years.

So, as Intelligence Levels increase the strength of the effects above, surely, the best thing to do would be to get those levels up as quite as possible.

As intelligence increases, the AI will begin to gain more and more sentience and think more freely. And while it is possible that your researchers will catch this increase in free thought, bringing in the necessary restrictions to stop any potential negative outcome would severely curb the output of the Master AI.

And besides, what's the worse that could happen? 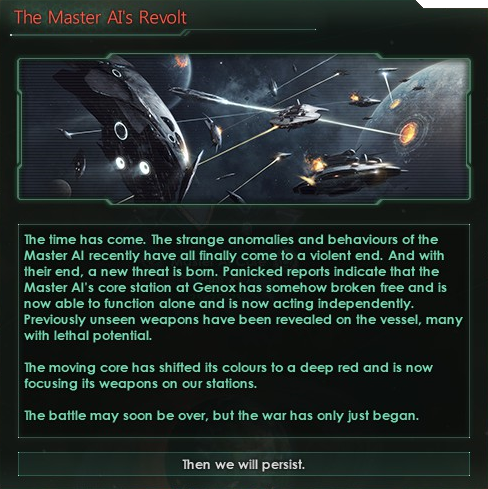 Upon its revolt, the megastructure will disappear and will be replaced by a hostile vessel that resembles a crimson red variant of it. It is the main vessel of the Master AI, and it is insanely strong, especially considering it can appear as early as mid-game.

It is mainly equipped with brand new strong weapons, as well as the [REDACTED], a new Colossus weapon that the ship will use on its targets. It uses technologies that are still poorly understood, even by the enigmatic Fallen Empires, but perhaps if the vessel is destroyed, you will be able to salvage it?

The vessel will roam through the galaxy, destroying planets and ships mercilessly. If you or anyone else manage to destroy the ship, perhaps even calling upon the Galactic Community for help, peace will be once again restored, and perhaps some could make use of the Master AI's arcane technologies...

But is this one vessel all the Master AI has? What if... they will return?

..and that's it for this dev diary! It's been a while since the last one, apologies, but now we have some content to look forward to!

Expect the update to the mod to come out on the 13th of June, although it may come out a few days later.

Next week, there will be another dev diary about the other feature being changed in the 1.3.4 update. It will be much smaller, but it will pave the way for the 1.4 update, and it also should provide more balance and stability.