(Today I have a question for those of you that follow the mod, about possible implementation of singular infantry in the mod rather than squads, please leave your thoughts in the comment section below about what you think and I'll put my reasoning for wanting to change squads to singular now.)

So why the proposed change?

Long story short, due to me wanting to make a classic C&C styled mod; singular infantry has been in the pipeline for a long time. I originally created a non-released Tiberium Wars mod that had singular infantry and the concept itself worked fairly well, albeit unpolished.

There are numerous benefits to a single infantry system, such as: 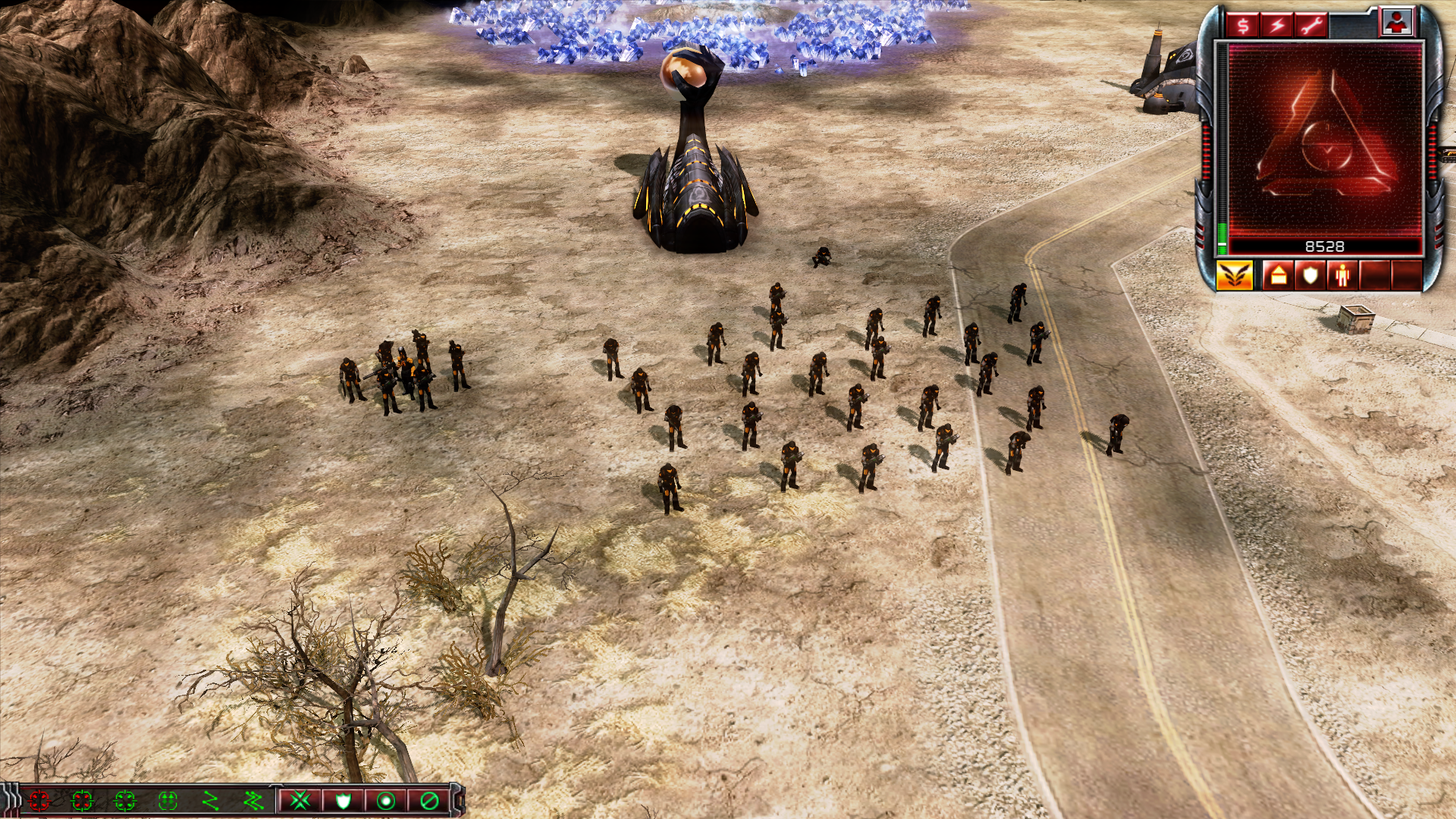 Some of the notable downsides of not having squads is that infantry can look more "messy" and don't have the clean look that squads have, they can also be somewhat more annoying to select individually and you will have to rely on drag-select more often, but I personally feel these problems are minor compared to the gameplay differences above.

So what about now?

If I think this is a well accepted idea I will go forward with the changes to make an entirely singular-infantry system for each faction in the game, with infantry rebalanced to fit their new "sole" roles.

Please let me know in the comments below what you think of this idea, its important that I get feedback for this as the change could be quite controversial, I know there are people out there that like the squad system so it'll be good to hear their feedback. :)

I prefer them in squads, could just make smaller squads that are a bit more powerful, also wouldn't single infantry make snipers squads a bit OP?

Not particularly, since I plan on rebalancing the system as a whole, Sniper Teams would be one of the few infantry that retain the squad format (kinda like how the red guard / angry mob are the only squaded units in Generals) because it makes sense to.

I plan on greatly reducing the rate of fire for snipers to compensate for the new changes (akin to the Generals Pathfinder or RA2 sniper).

Even with smaller squads the problem of healing the buggers still remains though. :(
(honestly I wish the engine was more advanced so that you could manually form and disband squads at your own will if you want)

hrm, I wonder if the Battle for Middle Earth logic for combining squads is still in SAGE
could reach out to someone in the Edain or Age of the Ring mods, they might know more about that (if it wasn't outright removed from the later version of SAGE)

I would assume its most likely different since I've tried to lookup and use Generals code for certain things in C&C3 but its long obscolescent and incompatible at this point except for certain functions that are similar.

EA had a habit of just straight-up chucking out features in different versions of the engine.

Squads currently are kind of like a fake "vehicle" of sorts that singular infantry are put into by default, but at the same time they're not. It gets even weirder with how vehicles hold the hordes of troops, its a messy system. :P

I've wanted to somehow get the C&C3 lighting system to work (believe it or not, it exists) but almost every attempt I've made to try and get some sort of dynamic light has failed so far. :/

Not a fan of the idea, I think squads both add interesting new nuances with ability to recover their numbers by retreating to appropriate structure, and make the battles more spectacular with larger amount of units on the field. I would be fine with some factions having an emphasis on singular heavyweights that can take on squads on their own, but I think generally it would be best to introduce interesting distincr for each faction ways to recover squads on the field rather than cut this mechanic entirely.

The problem is that the only way of replenishing squads currently is to have an auto-heal attached where squads replenish automatically (not ideal because they then become unkillable squads of doom) or a healing structure which is a pretty clunky / often unused mechanic, and for some reason you can't queue for the building so healing several squads is a chore.

Even if I make a medic tent, you still have the problem of infantry losing their firepower the moment individual troops die, making them the weakest troops of any C&C game. I can't be overzealous with buffing them either because then they just become overpowered very quickly lol. ^^

I agree that squads make battles more impressive in-general and that's one of the downsides to the change, but I do feel there are other ways I can rectify that by either making infantry guns / projectiles look more impressive, or by making individual infantry cheaper and more easy to make numerous.

With Singular Infantry I could just give the hospital / armory a healing radius that simply heals the infantry without any building needing entered at all, whiich convenience wise is a lot simpler for gameplay. :P

So, auto-heal, can that one be temporary? Like an AoE commander power/unit ability that gives a temporary squad regeneration for all infantry in area of effect? Or what about making vehicles like say surveyors work as mobile hospitals? Would be cool to have a whole dedicated unit that can deploy or just stay where ordered and work like armory does.

Also could probably, potentially have a thing where dying individual infantry eventually refunds their resources trough some effect, in turn making infantry a less risky investment? I know some more recent strategies like DoW 3 have a bounceback mechanic like that where losing units is a temporary but not permanent setback with resources. Apologies, I really dunno what are the engine and code modifications for CnC3, I mostly got Starcraft 2 modding knowledge to reference and naturally that's a completely different engine.

SAGE engine is a pain in the *** in terms of flexibility in all honesty, not to mention that its been changed enormously since generals and BFME, even the means of writing the code is different, albeit similar. ^^

EA in its infinite wisdom took away a lot of useful code from other games (rather than build upon it or at least kept it in) so usually stuff is very hard to work with, exemplified by Kane's Wrath itself being a game with many hack-jobs EA made to put it together lol.

I think there might be a way to replenish squads within the auto-heal function but I'd need to test it to see if it had any effect.

It might not work though due to it needing to be triggered by an upgrade (veterancy for example is an upgrade), I'd have to make a system that adds / removes the upgrade whilst the infantry is within the AOE.

I do believe there are other trigger methods though, it'd need some looking into lol. :P

hard to say until you try it, but me personally support the idea of singular infantry

I'm in favor of the idea, would definitely like to play around with it when fully implemented.

Squads definitely felt like eye-candy more than usefulness when compared to single infantry soldiers, not to mention effectiveness going way down when you lose a soldier or 2 depending on the infantry squad.

I'd say go for it, hell yeah

Yeah. That's honestly one of my biggest frustrations with squads tbh.

Its not like squads are stronger performing in vanilla C&C3 to compensate for this, compare basic rifle infantry from C&C3 to something like Initiates or GI's in Red Alert 2 and the latter is clearly superior being singular due to actually having some relevancy.

And then there's the anti-tank infantry in Generals which are frankly just incredible by comparison, and missile squad spam honestly starts to look like crap. :P

I am in favor of single infantry units if for nothing else it's a new idea for C&C3 mods.

Yeah, its definitely a new change for sure. :)

I could give Single Infantry a try.

Yeah. :D I don't plan on them just literally being single infantry with squads removed, they're gonna be rebalanced as a whole new system hopefully. ^^

It should be fun if I can get the balance decent enough. :3

Personally I think with the way the engine works squads are the best you can do. It adds a lot of unnecessary clutter on the screen having them all as singular units for what's effectively the same amount of firepower.

I kind of agree. Not only visual clutter with trying to micro them appropriately in tandem with other units, but it wouldn't surprise me if performance issues might become a problem. Not even in the sense of lag, but general instability for having more selectable units that can be given their own specific orders. And that's not even mentioning the possible balancing nightmare when the entire game was designed with squads in mind.

But I'm still curious how well this experiment could go. If it ends up working with minor issues, especially ones that can be ironed out easily going forward, that'd be pretty neat!

Technically the gameplay performance could improve for some as Squads in SAGE engine are actually fake, its just an invisible puppet unit that controls a group of infantry under a "horde" function, so they're all singular entities infantry in the squad anyway. :P

Its definitely not implausible, I've got experience with doing it before and it worked quite well, its just a huge change that people will either agree or disagree with. xD

It would definitely up the micro-stakes, that's a very noticable change. Despite the fact that I'll balance infantry to be similar singularly to squads, they will be harder to micro by virtue of them being smaller lol. ^^

Yeah and no, Red Alert 3 is the same engine technically and only has singular infantry so its not necessarily implausible.

And with singular infantry I would balance them to be more like a classic game, with 1 infantry unit providing the firepower of an entire squad.

Much akin to how a group of 10-12 GI's or Initiates in Red Alert 2 can quickly lay-waste to a building, or 20 or so can overwhelm a tank, it would be the same here.

In that sense the clutter would be reduced, not increased. (I only had a big horde in the video to demonstrate functionality etc)

Personally, I like singulars. And I definitely hate it when there is no way to heal and replace lost troops. How would that affect APCs or other transports though? When put in transports, must an infantry (squad/singular) take up one ability slot?

I'm down to see singular infantry. It would be the first CNC3 mod to do so, could be an interesting attraction for Tiberium Dusk, and it would help make the mod more unique and cement its own identity.

I can spam unit but what it will do one it garrison and what is the unit cost?
then you have APC or "transport" problem. How would it be?

i must admit it does sound rather interesting to see.