Here you have it. The new update with quite some news and a lot of new images. Be sure to post your thoughts if you have any. 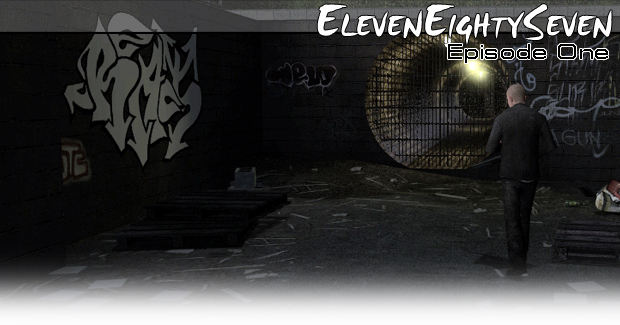 Yes, you've read it. 1187 goes episodic. Although I originally planned the mod to be a big one, I think the decision to go episodic is going to be a better choice in the long run.

I get to expand in the next episodes on what we originally planned, thus the overall length of the game when all three episodes are finished will be greater. I can also now listen to the feedback from you, the community. Plus it wouldn't take as long for the public to wait for it if I didn't make this mod in episodes. So yeah I will be looking at community feedback to see how well or not the mod is received by you guys. This may influence the next episodes in some ways.

I and most of the team members are all still learning the tricks of the trade. I myself am trying to get better at everything I do and I can safely speak for the rest of the team. So with that in mind, know that this is personally my first real mod. and learning how the source engine works is quite a deal but a lot of fun.

That said I am very proud of what we've accomplished sofar. I created this mod for people who love the Half-Life games while I also made it into a game that I would like to play myself as well. This may clash with what some people might expect from it but those things are bound to happen. Not everyone has the same tastes in games, which is good. All I hope is that whoever plays 1187 will have a good time.

Right now I am aiming for a December release, which at the moment seems to be a very realistic one. I cannot gaurantee that we will make it 100%, but we will do our best to make it happen. I'm at the last stages of bug fixing and polishing. So right now all that is really left to do is finish off what we've started and then I can move on to the final map which will end with quite a nice cliff-hanger. Since this map will be quite complex to set up, I cannot gaurantee how soon I can finish it, and because I rather ship out something that is polished and not be constrained by a deadline, I will keep at it hoping to finish in time.

Also the forum has gotten a small overhaul. I will keep working at it after the first episode has been released, and will be more active on it. check it out here:
Eleveneightyseven.freeforums.org

There's only one sad announcement I have to make. The Mustang will not be seen in episode 1 but it will have a big role in episode 2. But because I know most people have been looking forward to it, I do have some ideas to bring it into the mod, which brings us to another bit of news which is that Episode 1 will have the bonus maps I that have released with the secod demo and then some. The maps got broken due to the updates to the main mod, which means that I decided to touch them up. This also means that in between episode 1 and 2 I will release new bonus maps that will serve as either preludes or side stories to the main mod.So there you have it. I hope to have informed you guys enough to start getting excited, I know I am. 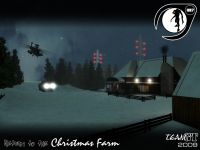 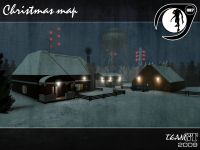 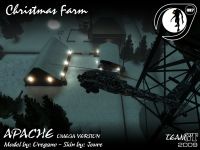 Dave has created a very awesome LAW rocket launcher. Dec coded in the iron sights and implemented a specular map. Basically if you're not in iron sight, the rocket just goes straight in whatever direction you're looking at. Only while in iron sight will the rocket follow which direction you aim it at. 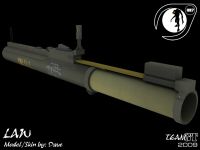 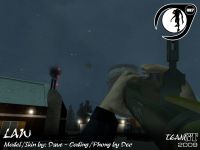 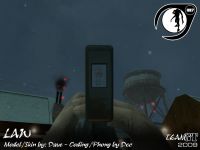 Next up is the APC. Martin did an awesome job on the model. And I had a blast skinning it. 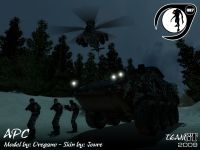 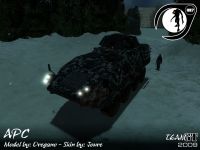 Lastly a sneak peek at the 6th map, not much, but it's the final version. 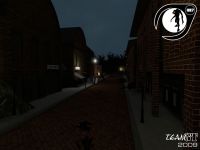 The mod will have around 10 maps, 8 story based maps and the 2 bonus maps revisited from the 2nd demo. The mod is estimated to have around 3 and a half hours of gameplay. So I hope to have informed everyone enough to get excited.

So much win. I just want to take a moment to thank our fans for sticking with us for so long. We hope to have an excellent release. It's because of all of your support that we have made it so far!

Indeed, it's thanks to the community that gave me the energy to keep at it. But It's also thanks to the team that's making this happen and gave me a huge boost to do better and better.

Enjoyed reading the write up a hell of a lot. You have put across your points very well and detailed what you plan to do in a very professional manner. The mod is also coming on leaps and bounds and i fully support your (seemingly) Community based decision for "Episodic" Game play. Well done.

Thanks a lot mate. Yeah I do take the community serious and want to take any use full feedback/input after the release into consideration while working on the next episode.

We will NOT die. Trust us, we are dedicated.

Look at half life...

Wait so because one episodic peace of crap died that makes it so "ALL" episodic projects die? Sweet logic bro!

werent you banned. Can you get back to the arse end of the net and stay there please? if youve got a comment, make it good or just go away please. we dont need dirt all over our profiles.

so please keep the comments to a contructive standard or get out.
cheers.

To A.M.M.D.:
SIN was, I think, the only game that got canceled. Valve is still at it with half life, and sam and max got finished.

I'm not really in the position to be bought out like ritual has been, since, we're a mod team. I've not come this far to stop this project until it's finished.

But seeing your concern on this mod, I'd say thanks for that, cause you seem to be anticipating it's release like the rest of the team.

And for the sake of it, if you have nothing to say on-topic, then again, don't bother to waste our time.

I seriously love this update! :)

Awww yeah, Very nice skin work there. cannot wait to bust some choppers with the LAW. Awesome stuff, keep it up.

Thanks Ferret. Have fun when you play it.

Hey does this mod require EP2? I only have HL2 and HL2EP1

yeah you do. I'm using the Orange box SDK to develop the mod so you need episode two.

awesome update man, im excited for this to come out

Thanks for the support. We're excited for it's release as well. :)

Awesome update, you have been putting alot of work into it :)

Thanks man. Yeah the team's pouring a whole lot of their time and effort into this project.

hehe aye, but for game-play sake we left that in.

Sorry about that officer, didn't realise the weapon police were guarding these parts!

Without the guiding the choppers are impossible to kill, we do know they are not guided.

Looking incredible!! keep it up :D

Thanks a lot, man.

The header picture is so nice,the other pictures are also very nice,but I think the music isn't very original(I have had enough of the same styled stuff(music,games,e.t.c.)).Try making something with a style that you have never heard before.But I think the mod is going to rock.

ahh, I made the track simply for the menu. there's no music in the game, and I can't be bothered with creating something original with my limited resources since my keyboard and mic died on me a while ago. I'm glad you like the images though. The mod's about game-play and immersion.

I actually play the half life games with music turned off.

Hey man great, Love all the detailed points. Good choice on going episodic i think. Also like the look of the LAW, And Music sounds great! :)

Thank you for the feedback. Glad you enjoyed the update.

Great news and pic's awesome LAW and APC, Keep it up!

Thank you. We will keep going at it until it's finished !!!

Cool. Now I can play this mod. Looks epic.

Thanks a lot man, yeah I'm doing my best to get it released at said month.

Thanks for the update Frere! Good to see we're getting some exposure.