The Oscars of the gaming industry names winners for its Pioneer and Ambassador awards along with the reveal of Tim Schafer (Psychonuats, Brutal Legend) as the host!

The 2009 Game Developers Choice Awards, the highest honors in game development acknowledging excellence in game creation, have named the recipients of two of its special awards, while also revealing that popular host of the 2007 Awards and Double Fine founder Tim Schafer is returning to present this year's Choice Awards.

Harmonix co-founders Alex Rigopulos and Eran Egozy, co-developers of a groundbreaking decade-plus long line of music games culminating in the Rock Band franchise, will receive the Pioneer Award for their work; and Tommy Tallarico, co-founder of the Video Games Live concert series and founder of the Game Audio Network Guild (G.A.N.G.), will receive the Ambassador Award for helping to advance the game audio community.

Presented by Think Services' Game Developers Conference (GDC), Gamasutra.com and Game Developer magazine, this year's awards ceremony, held in conjunction with the Independent Games Festival, will be hosted on Wednesday, March 25th, during GDC 2009 in the Esplanade Room in the South Hall of San Francisco's Moscone Center. For complete details, please visit www.gamechoiceawards.com..

The Pioneer Award celebrates those individuals responsible for developing a breakthrough technology, game concept, or gameplay design at a crucial juncture in video game history, paving the way for the many developers who followed them. Harmonix's Alex Rigopulos and Eran Egozy have been chosen by the Choice Awards Advisory Committee for their role in pioneering and popularizing music games, a vitally important genre for widening the appeal of games.

The duo created Harmonix Music Systems in 1995 after graduating from MIT, and the Boston-area company experimented with early music games such as The Axe, before developing electronic-based rhythm games Frequency and Amplitude for the PlayStation 2.

Beginning in 2005, Harmonix developed Guitar Hero, and followed that up with Guitar Hero II, Rock Band, and Rock Band 2, fueling the explosive growth of the music games category to over $1 billion in sales. In 2006, Harmonix was acquired by MTV/Viacom. In 2008, Eran and fellow co-founder Alex Rigopulos were named to the Time 100 -- Time Magazine's list of the 100 most influential people in the world.

"With the music game genre exploding into a true phenomenon in recent years, we wanted to honor the key developers behind its rise to power," said Meggan Scavio, event director of the Game Developers Conference. "Alex and Eran's dedication to both music and gaming has helped to entwine the two in ways that have truly advanced the art form, and they are worthy Pioneers."

The Ambassador Award honors an individual who has helped the game industry advance to a better place, either through facilitating a better game community from within, or by reaching outside the industry to be an advocate for video games to help further the art.

Tommy is the founder of the Game Audio Network Guild (G.A.N.G.), which is a non-profit organization formed in 2002, and tasked with educating on interactive audio by providing information, instruction, resources, guidance and enlightenment not only to its members, but to content providers and listeners throughout the world.

In addition, Tallarico, who has created music for games over the past 18 years. from Earthworm Jim through Sonic & The Black Knight, co-founded Video Games Live, a public concert series started in 2005 which features music from notable video games performed by top orchestras and choirs around the world. The concert show has been performed worldwide to hundreds of thousands of people, from the Hollywood Bowl to major venues in Europe, Asia and South America, and continues to raise the profile of game music as an art form in its own right.

"We're delighted to honor Tommy Tallarico for his work advocating for game audio creators worldwide," said Simon Carless, chair of the Game Developers Choice Awards Committee. "He's a true Ambassador for the game musician, and his larger than life persona includes a heart of gold when it comes to caring about the entire video game industry."

Finally, Double Fine founder and general roustabout Tim Schafer has been confirmed as the host for this year's awards, following his well-received appearance as presenter in 2007. Schafer, the LucasArts veteran designer known for critically acclaimed games such as Full Throttle, Psychonauts, and the upcoming Brütal Legend, sees the awards as an opportunity to, “No way. I'm not writing my own quote. I already have to write my own script for the show! It's not like you guys are paying me by the word!” Schafer added that this year will surely be, “Actually, you guys aren't paying me at all. That does it--This year, I'm keeping the tux.” 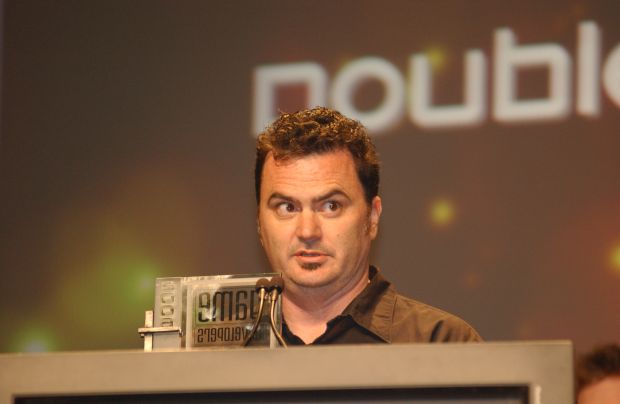