First URRpdate of 2015! Loads of graphic generation, some aesthetic consistency, and a mysterious altar.

Posted by UltimaRatioRegum on Jan 11th, 2015

I’ve now started work on 0.7, beginning with some of the graphics and new objects. 0.7 is all about building interiors, so this means all the obvious stuff – tables, chairs, beds, etc – and the rather more obscure and intriguing stuff – altars, thrones, etc. To begin with this week I’ve focused on two components of this, primarily the “mundane” household/building items, and also the floor tiles for the more expensive and up-market buildings (upper class housing, cathedrals, parliaments, etc). I decided to start working on the aesthetics first before moving to too much coding, as I wanted to have a good image in my head of the world (and the variation in the world) that I want reflected throughout building interiors before I thought about their layout. As with everything else in the game, all civilizations should vary – now, admittedly there is only so much you can do to vary a chair, but I think I’ve done a pretty good job: 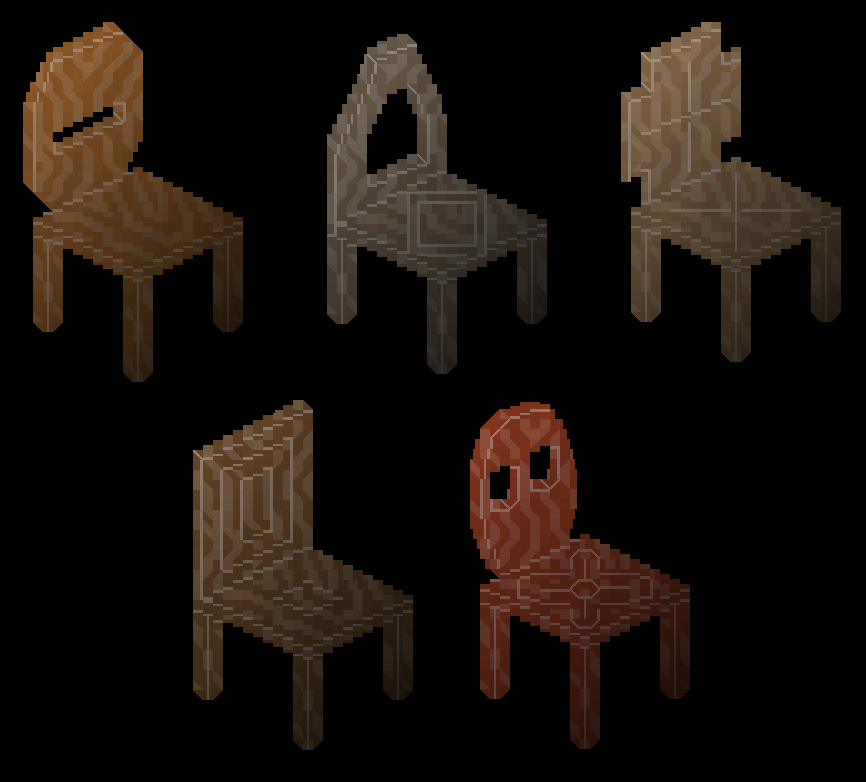 As well as these I’ve also done tables and beds, and various designs on those too, bearing in mind furniture items are not “to scale” (i.e. they are designed to take up the entire size of the lookup window regardless of their actual relative size). The more up-market the location the item spawns, the more elaborate the decoration, and the choice of wood colour is naturally based on the biome the furniture is found in: 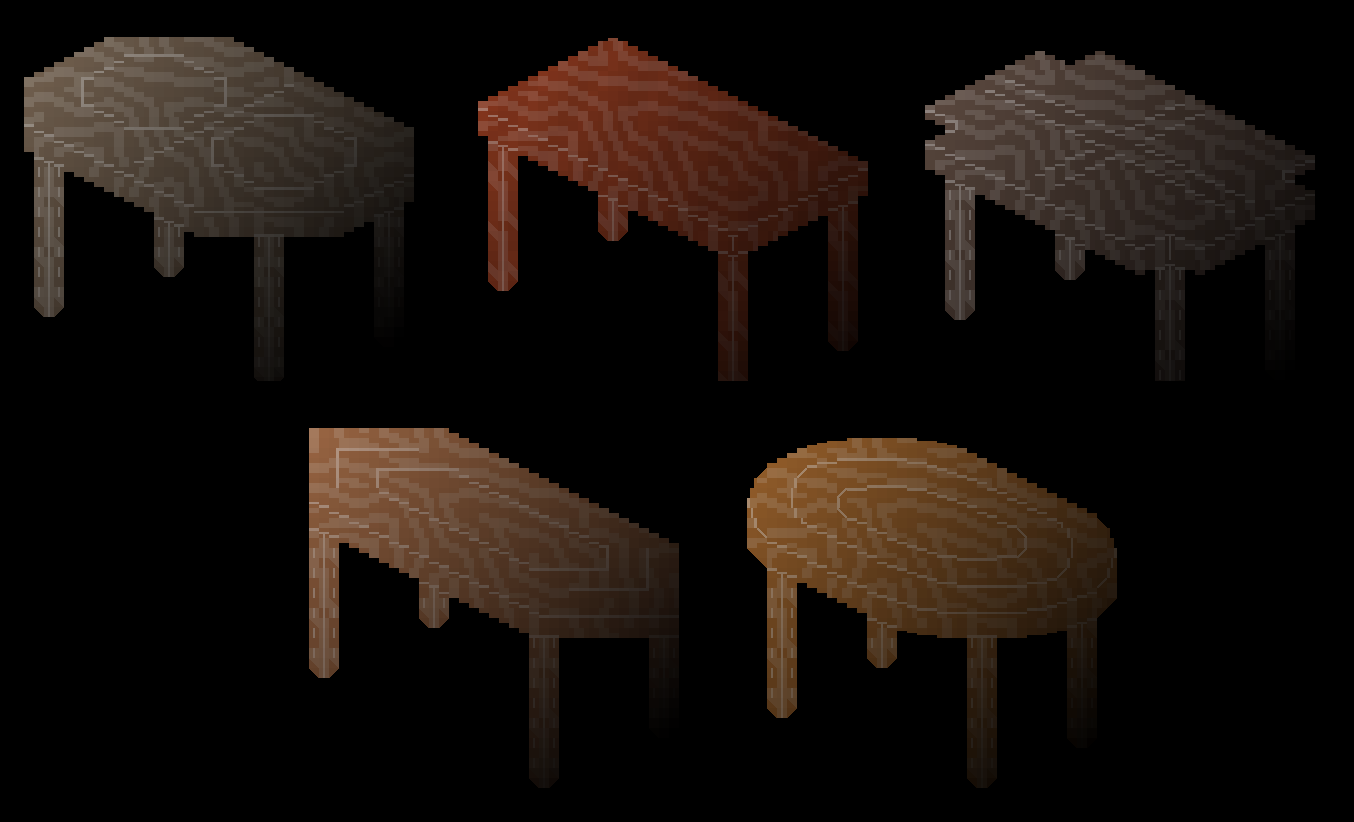 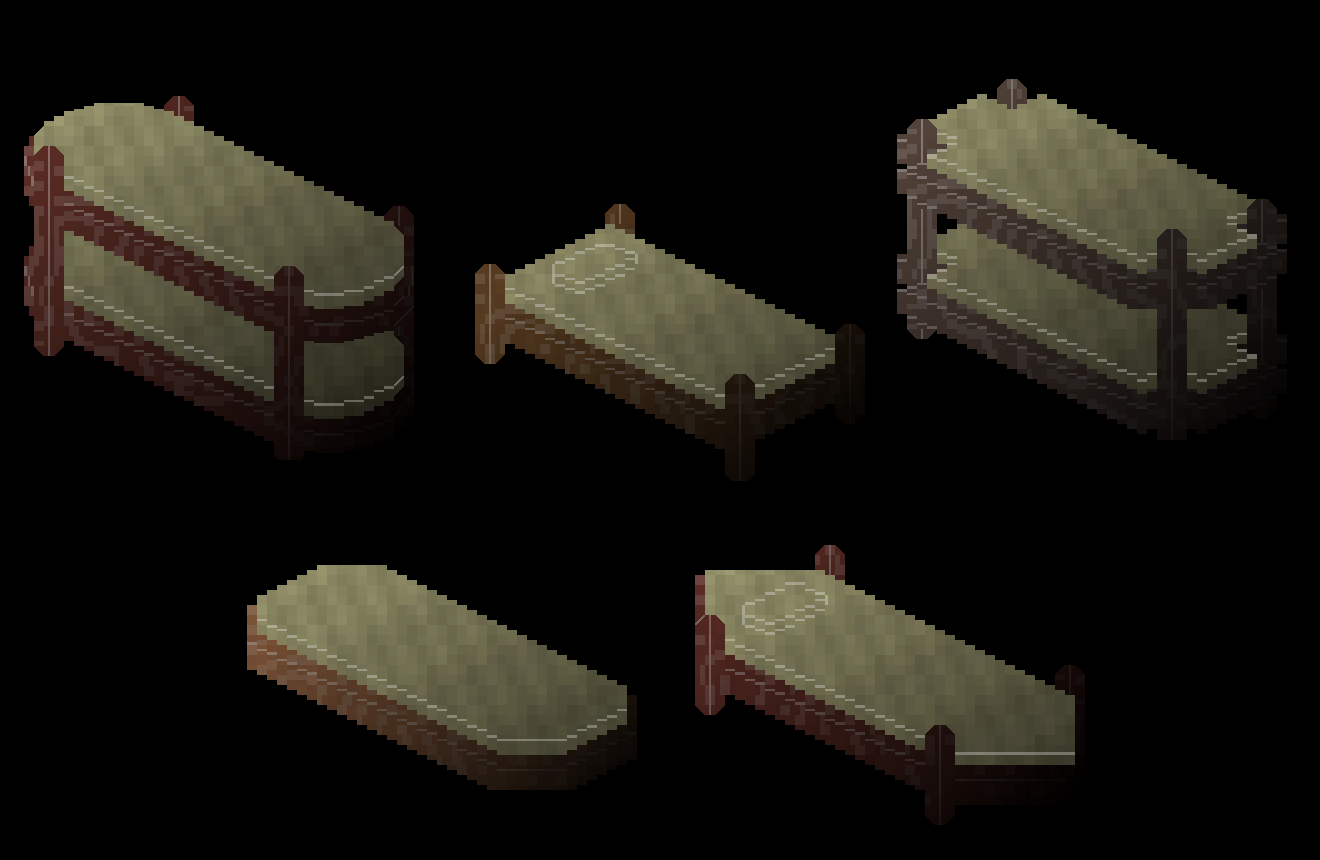 I also want to take this entry to point out a certain… hidden aesthetic consistency within cities. I don’t know if anyone will have spotted this – and it is becoming more pronounced in the next version – but I rather like this. If you’ve ever looked at the gatehouses in cities, you might notice that there are several different shapes:

In total there are five – squares, octagons, diamonds, circles (as best as possible with a tiled square grid), and crosses. Each civilization picks one at random. It’s a minor additional detail, but then if you look at shop signs, you’ll notice that those also have different shapes: 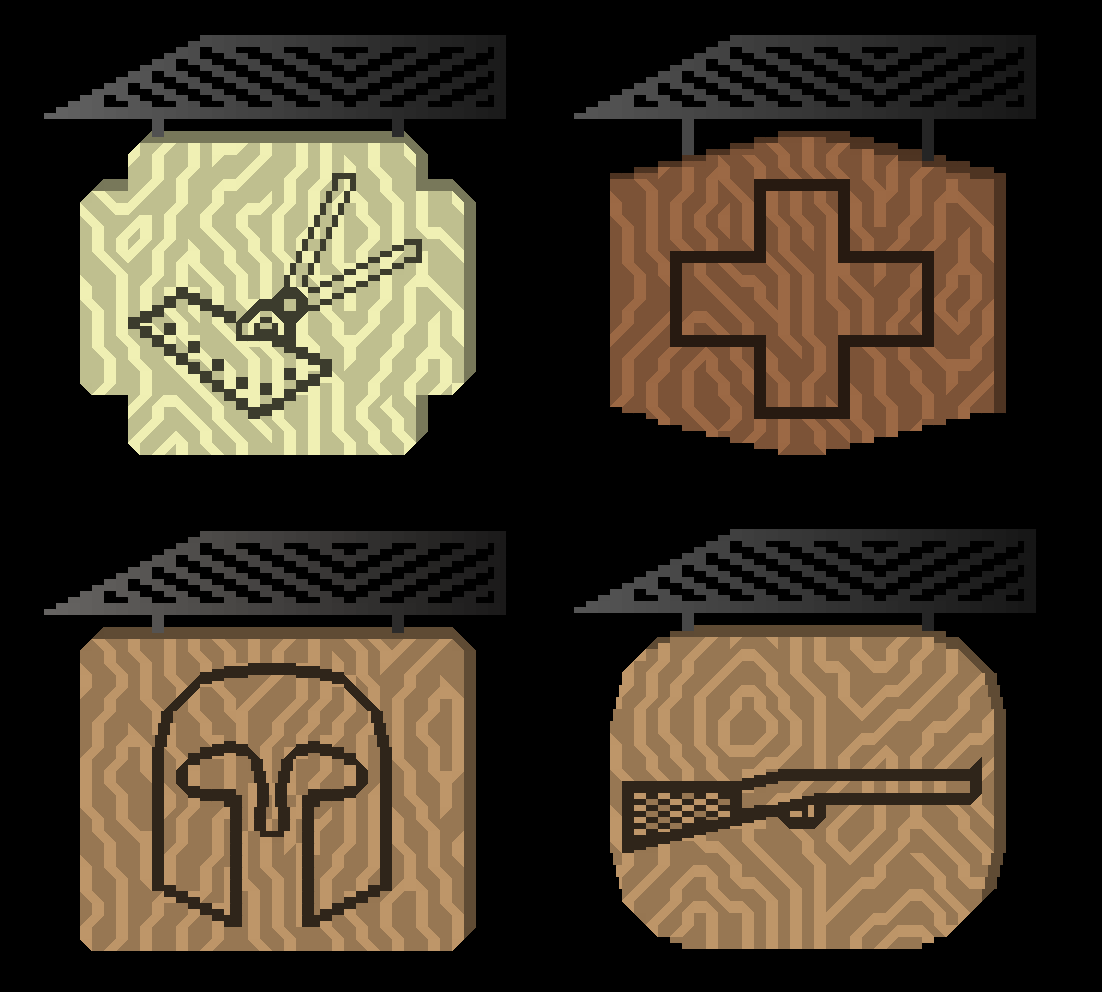 The observant player would then perhaps also notice that the floor tiles in cathedrals, parliaments or castles have a range of different patterns based on various shapes (and also their colouring is dependent on the flag of the nation in question): 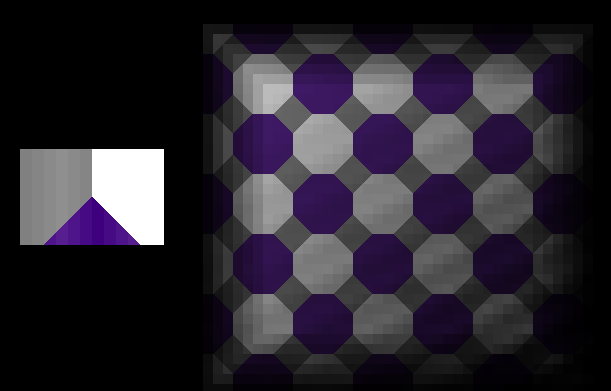 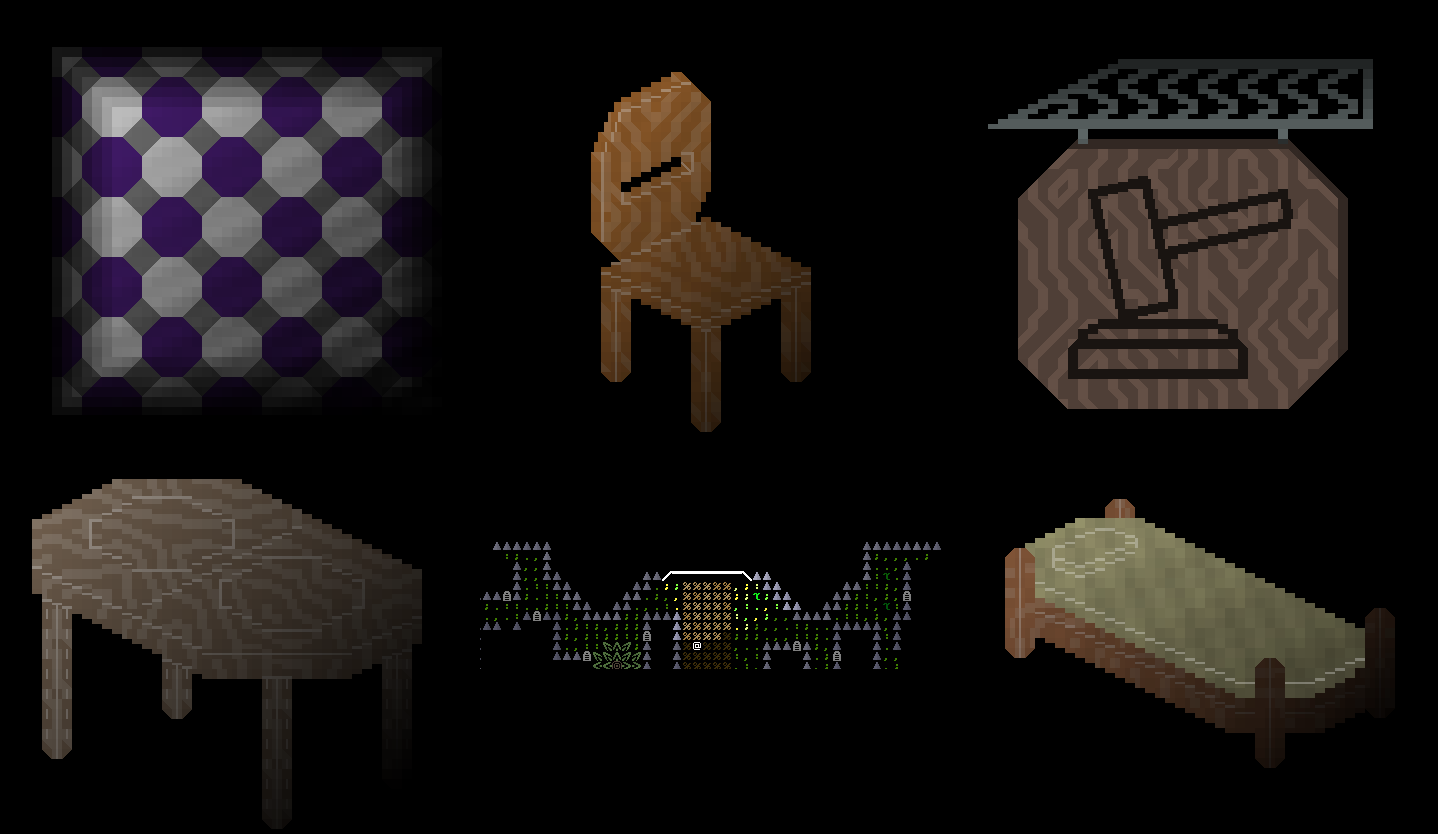 That’s just a minor thing, but I think helps with just a little extra distinguishing between civilizations. Now I’ve done a very good portion of the new graphics for this release already in just the first week of serious coding (perhaps a third of new graphics?), my next task is the challenging technical task of hacking down saving/loading times, and changing the game to saving the map in chunked sections within a folder on one’s computer, rather than in chunked sections within a single massive file. It’s a hefty change, and one of those which will either be weirdly trivial and only take me a day, or drag on for the week. We’ll see. Coupled with this is creating the new infrastructure for building interiors which is going to be handled in the same way, and from 0.7 onwards saving/loading times are going to be reduced to a fraction of what they are now, and they will no longer rise the more of the world you’ve saved (which it currently does – a serious oversight). Either way, next week I’ll be talking about these technical changes in a (rare) semi-technical blog entry. In the mean time, you can keep up to date on my devlog, Facebook page, or Twitter. See you then!

And… some strange altars have been popping up. 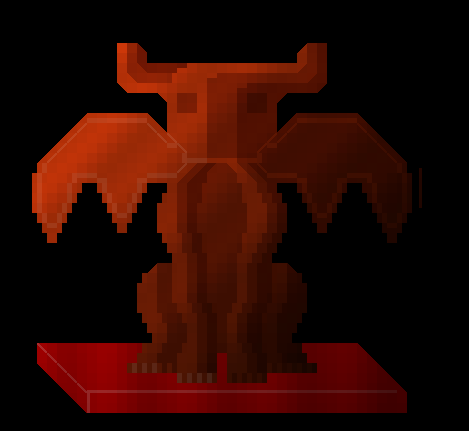 okay how the **** you will implement a the diagonal thing in a ascill game? O.O

What diagonal thing?! If you mean the tables/chairs/etc, those are just a single tile on the ASCII level :)

Strange altar you say? Rub it!

What could go wrong?!

That altar creature is strangely adorable. No wonder it is worshipped enough to have altars built! :)

It's amazing to see how much detail you put into these civilizations, and especially how graphical URR is for an ASCII game. It's becoming a true Dwarf Fortress game in its own right, purely by being so lovingly and intricately crafted. I can't wait to see where it will be in a year.

Adorable?! Ha, that's amusing, I think it looks very weird and mouth-less. Though I suppose if I squint my eyes I see what you mean...

And thanks :)! That's the hope - and I'm currently working on planning the gameplay systems which will actually integrate these graphics, rather than just making them pretty background - there's nothing wrong with that, but if secrets and clues might be HIDDEN in rare features like altars, thrones, etc, then that becomes an entirely different ball-game...