Ranged combat is in. Players can use several grades of bows, and crafted arrows to attack enemies and prey from afar:

The client-side caching mechanism has been rewritten to allow for the caching of more content. if you would like a little more info, check here.

Music is now in. Currently there are two tracks available that play at short intervals.

Females finally grace the world of Lugdunon with their presence. There are a few sprite issues that need to get ironed out, but otherwise they are in an ready to get adventuring! Also, in celebration of this momentous occasion, Aunt Peru has shaved her beard:

Several animals have also begun to populate the land. So far we have cats, chickens, and pigs. Chickens can be coaxed to lay eggs in chicken coops and can be harvested for their meat and feathers. Pigs have only their meat to give. Both chicken and pork can be roasted for eating. Eggs can also be thrown upon the ground for a small chance at hatching a new chicken. They'll be useful in other ways very soon. 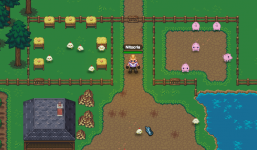 Items can now be configured with the hammer tool after placement. For instance a chair, once placed, can be rotated:

It is also now possible to begin the game with absolutely nothing in your inventory and make the tools you need to begin your adventure. Stone outcroppings have been added, and can be harvested for stone with your bare hands. Sticks can also be gathered from trees in the same manner.

The town of Bibracte has also reached a state of near completion. Two popular landmarks are the market: 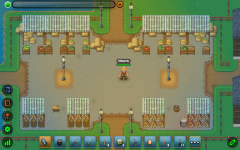 And the main watering hole, The Twisted Toe Tavern: 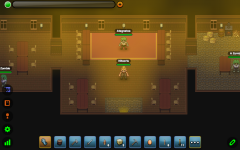 I know that I have forgotten to highlight a few more key items in this release, so if you wish to read it, the full changelog is listed below: