1) Jumpjet Vehicles (Helicopters, etc) are now built at airfield. They share the same building queue with pad aircraft. But rally point is still not supported. Each airfield has two exits (roofs). You can set each exit as primary, so that your aircraft would come out of the primary exit.
2) Each player now has a Territory, marked as a glowing green hexagon network, and a floating flag, indicating nationality. They cannot be destroyed or moved, and they are not counted towards victory or lose. Each player can call an MCV that lands in your Territory every 5 minutes. It costs $3000 and it takes 2 minutes to come. While it's coming, there is a timer revealed to all saying "MCV arriving in X:XX." All your unit (includes naval and air) self heals inside your Territory.
3) Campaign List: you can play any campaign you want. All campaigns are adjusted to new additions. 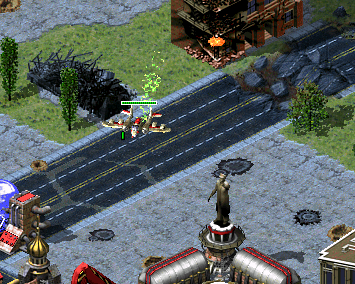 3) Divine Blade: New Yuri pad aircraft drops itself onto the ground and deploys into a tower. The tower is strong vs infantry and vehicles. Extremely vulnerable in air mode. Costs $1400. 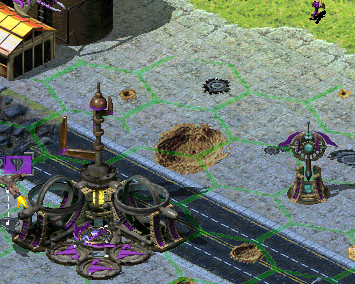 4) Mag-bird: Air version of Magnetron. It has shorter range due to its high altitude but it can spawn two Funnels. Strong vs vehicles. Costs $1200. 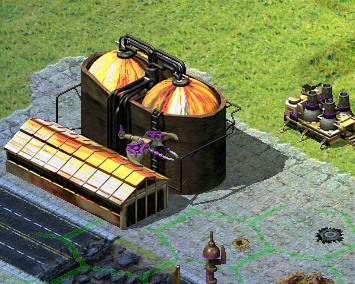 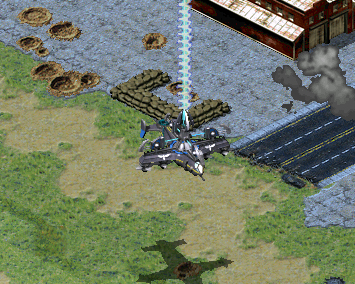 Miscellaneous Changes:
1) Soviet Squid is replaced by ElectroManta, able to shock and paralyze vessels within a small area. As a result Yuri can train Giant Squid now.
2) In air mod, Siege Copper fires MG & missiles against vehicles, fires only MG against infantries. In siege mod, it fires a barrage of artillery shells but it will forewarn the target area of the impending barrage with a holoscanned designator (like RA3 Pacifier FAV). Cost lifted to $1200, no longer requires battle lab.
3) Apocalypse fires missiles against ground target in addition to its double barrel cannon. Every time it fires missiles it gets speedup & Iron Curtain for a while. Cost lifted to $2000.
4) Sea Scorpion is now a turreted amphibious hovercraft, able to fire while moving. It launches an extra torpedo on water; it won't try to launch torpedo on land.
5) Tesla Tank triggers an electromagnetic blast every time it fires, paralyzing nearby enemy units.
6) Black Eagle fires napalm bombs and deals DOT. Strong vs immobile/slow. Cost lifted to $1500. Korean can build Harriers now.
7) Soviet tanks have low chance to spawn a terror drone when destroyed.
8) You can send at most 2 shock trooper into Tesla Reactor and each gives you 250 extra power.
9) Shock troopers, Tesla Tank, and Electromanta take very little electric damage.
10) American Airborne has 6 GIs and 4 GGIs.
11) Tank Destroyer uses reactive armor, reducing incoming AP damage (MBTs, Apoc, self) to 50%.
12) Most infantries can garrison. GI's, Con's, and Init's garrison weapons' damage against vehicles halves.
13) All base defense costs are 20% off. All Super Weapon costs are 40% off.
14) Rocketeer throws an extra bomb against ground target.
15) Nighthawk health increases to 250.
16) GGI's machine gun fires faster.
17) Robotank gains an extra machine gun.
18) Harrier fires 3 Missiles and can attack air. Cost reduced to $1000.
19) Flak Trooper fires anti-tank missile.
20) Kirov is able to launch bombs to attack further target (in 5 cells) but launching a bomb will consume most explosive and damage is reduced to 10%. When the target is close enough, it drops bombs instead.
21) Other changes I don't remember

This mod is dead because my laptop got stolen.

can this playable to campaign.

Strange request. Why do you want it to be smaller?

Is it possible for you to make the infantries smaller? Thank you.

THis mod seems quite crazy and more than a little imbalanced... but anyways, nice ideas and coding I guess.

run RunAres.bat to start the game.