High Above Downtown Mutant City, Broadcasting to the Satellite Minds To Gazillions Across the Galaxy and a few on the Internet....It 's Your Super Hero Show. Your Super Hero Show is an Unreal Tournament 2003-2004 Mod, With all original voice over content and audio, I created, recorded and edited. I have put many hours into. The biggest trick in my mind, was how to fuse a load of audio work and ideas, into one conceptual mod. A mod that would actually be played and enjoyed, by my fellow Hero Fraggers. Most know the versatility and replay of this old school shooter. UT2004 can still hang with any game today, in terms of fun ad replay value. In the case of customization, it beats, most of todays limited games. I have released this mod and will have, even much more content to the this very large audio mod. Sound is half the game and I hope this makes half of the game, that much more fun for others...Frag On Heroes, It's Your Super Hero Show!

Your Super Hero Show Early Access Includes the Following Original Created Content: Your Super Hero Show Player Sound Pack, The Following Announcer Packs: Marvel VS DC, The Kree Empire VS The Skrull Hive, Aliens Versus Mutants, Humans and Robots, Mutants Versus Humans, Robots and Aliens, Robots VS Aliens, Humans and Mutants. The X-Wars; X-men VS X-Factor VS. X-Force Vs. X-Calibur. The Fantastic Four VS the Fearsome Four, The Avengers VS Defenders VS The Guardians VS the Invaders. This is Early Access, so more is to come, I just want to get the Super Hero Shows out there going for now! Let me know if you enjoy it, if you don't please don't be to harsh, I have worked my butt off! 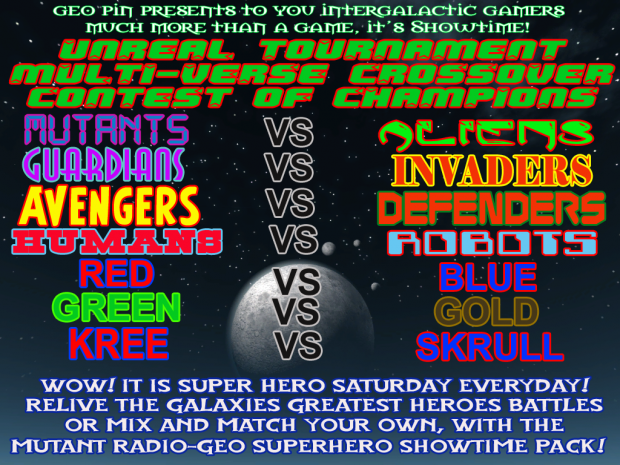