XWVM is a mod to the original X-Wing game from Lucas Arts and Totally Games by Larry Holland and Edward Kilham. We are re-implementing the executable to extend the game beyond its original hardware support. The mod of course requires the player to own and have installation of the original X-Wing game, or have the GOG or Steam versions of X-Wing Special Edition (either the 1993 floppy, the 1994 CD, and/or 1998 Windows edition). The team of fans developing XWVM is not associated with Lucasfilm Ltd or Disney, and XWVM is not an official Star Wars product. XWVM isn't a standalone game, or total conversion, but a mod to the original. XWVM neither contains nor distributes any copyrighted material. All game resource files (missions, voice overs, SFX, iMUSE automaton, in-game graphics and 3D models, etc) are loaded from the player's copy of the original game, or are replacements originally created by our team, where the original resources are considered inadequate for today's standards. 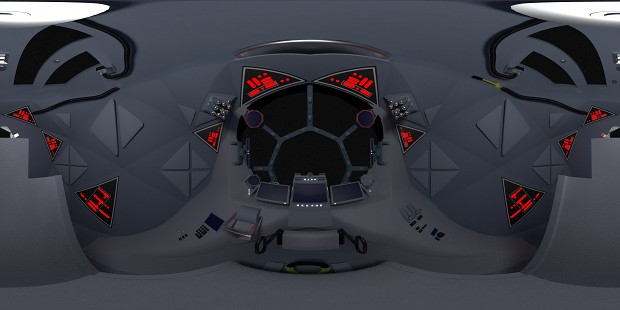 yes, that looks a lot better than the last render :-)

The TIE Fighter Cockpit is inching closer to completion.
There has been a lot of changes to the geometry. Proper textures have been added as well.
But see for yourself.

Special thanks to Colin J. for providing the ELS gauges.

(As ModDB still doesn't support 360° images, we recommend once again to download this image and view it in Insta360 Player.)