Aliens and terrorists have taken over XT Tower and are using all of the internet bandwidth. It's up to you to fight your way to the top and put a stop to it.

The mod has been downloaded almost 150 times. Thanks to everyone who downloaded it. I hope you liked it.

Throughout the mods development, various things were changed. I want to talk about some of those changes.

-Shadow Moses-
Not intended to be part of the mod, I made this recreation of the opening of Metal Gear Solid to help me get used to Half-Life's mapping tools. I was happy with the results, and even considered having a part of the tower where you visit various levels from other games, or even recreating the whole of Shadow Moses Island, but ultimately decided against it. 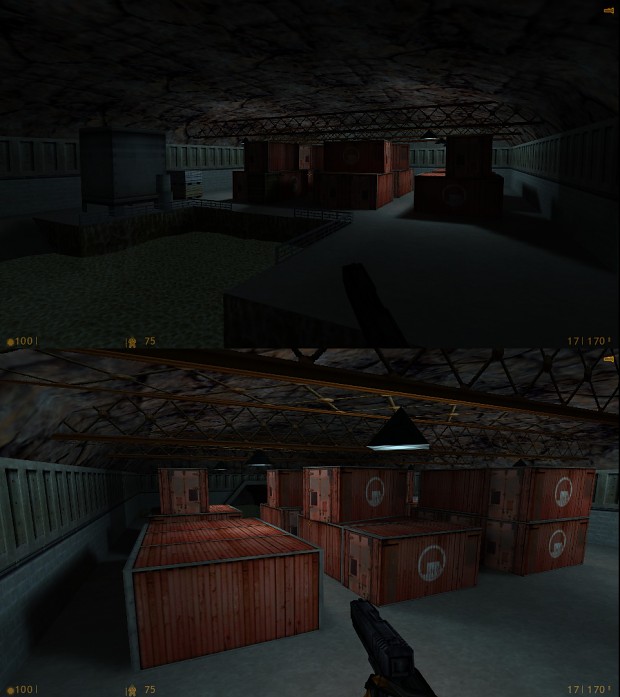 -Elevator-
The original idea was to have the player take a lift between floor, mainly as a homage (ie. rip off) of the Doom map pack Going Down. As well as a nod to other games like Zero Tollerance. However, there was a number of technical issues, not least of which was problems getting the doors to open and close at the right times. So I ended up going with stairs instead.
Losing the lift also meant some related ideas were gone. I like the idea of the doors opening to generic office building for a while, only for one time the doors open to somewhere that doesn't make sense to be in a tower block.
The stairs themselves had to be remade a few times due to technical issues. Though it all worked out in the end.

-Barney-
One idea I had early on is that there would be a Braney on each floor, and each one would tell a groan worth joke. Jokes like "Why are pirates called pirates? Because they Arr!" and "What sits at the bottom of the ocean and shakes? A nervous wreck.". There were issues with the sound quality, but also there were gameplay problems such as Barneys blocking the player. I was also concerned that players would try to take them between floors and cause problems that way.
I ultimately decided to cut them. But there are some traces of them left. Each floor has a VHS and a chair, the idea was that this would explain what Barney was doing all day while waiting for you to turn up. 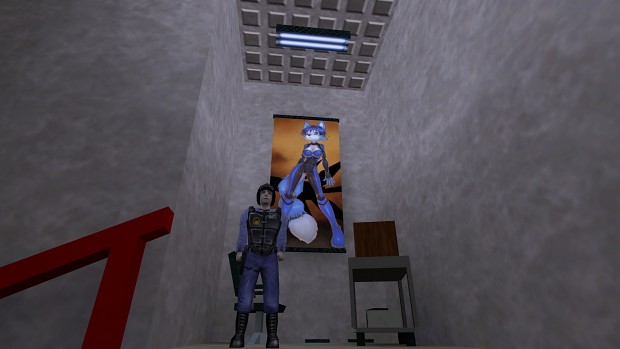 -Pyramid-
One idea I worked on early was a level where the lift door would open and you'd find yourself in a desert with Pyramid. This was one of, if not the first map I made for the mod (not counting Shadow Moses).
There was some stuff I liked. A trap that you had to escape, and a room with multiple balcony like floors you made your way up while enemies flooded the middle. But there were some design issues, but the main problem was the map itself became unweildy and frustrating to work on.

-Shopping Mall-
One idea I had was a wave defence map in a shopping mall of some kind, with lots of glass and debris to break as the fight went on. I decided to make it the final level, a roof top mall somewhat similar to the end of the custom Left 4 Dead 2 campaign Diescraper. Unfortunately, I was part way through making it when it refused to compile due to too much stuff. I did some agressive cuts until it would compile, but it was clear my idea for a shopping mall full of destructable objects wasn't going to work. I ultimately went for a quicker and simpler rooftop helipad. 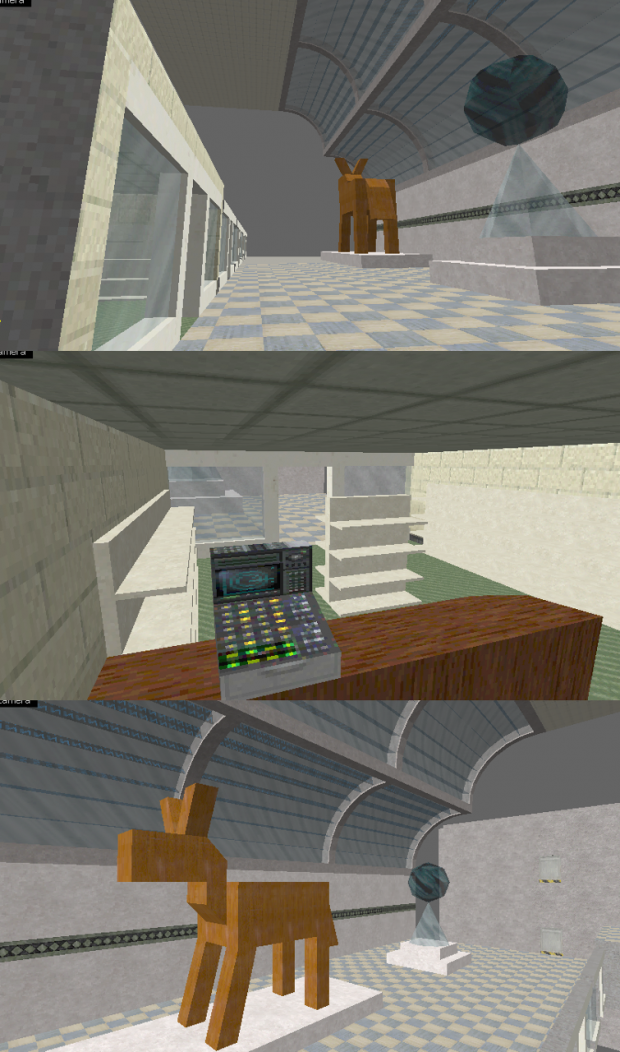 -Lift Shaft-
I made a platform level where you climb a lift shaft, but I built it too small. Even when I tried a quick fix, it was kind of dull, so I cut it.

-Scaffold-
One map that I built one room of before I realised it wouldn't work was based on the idea of you going outside of the building, and climbing up some scaffolding while enemies shot at you from above. While technically possible, getting it to a level of quality I'd be happy would have been difficult and time consuming.

-Ending-
This idea never got past the planning stage. The core concept was, at the end of the final mission (which at the time was the shopping mall) you set off the self destruct and escape to the basement where there was a train. It would wait for you if you signed in, and if you didn't it would have already pulled away, forcing you to escape on foot.
Another idea was an ending where barney would congratulate you in the ruins of the tower, a TV having survived. Perhaps with a joke about how there was nothing on he wanted to watch.

-Other Stuff-
There was some custom models I liked that I was tempted to include, but decided against it for various reasons. Simplicity mainly, and I wasn't 100% sure if some of them allowed re-distrobution with mods.
If I did use custom models, I'd have liked to have altered the HUD colour to match the custom HEV suit/hands.
There was a custom title screen I drew, but it was bad, and I couldn't get a custom Half-Life title screen to work. No big loss.
Finally, there was a few artists who's work I'd like to have included in some way, but didn't.

So, that's about it for cut or changed stuff people might find interesting. Thanks again to everyone who downloaded the mod.

The full release of XT Tower for Half-Life. Unzip to your Half-Life folder, and restart Steam.

Cant wait to see where this mod goes!

Here is a complete playthrough of this mod, feel free to use the footage for whatever!

Had quite a lot of fun with this! Really not so sure why the rating is so low.

Levels were simplistic but charming and offered a lot of variety! Enemy placement could have used some work but it was a nice 40 minute Map-Pack!

I look forward to your next project! :)

I made a video playing thru the mod. It's VERY similar to and probably inspired by TWHL Tower. Pretty easy and short. I think it does pretty good on simulating the "lots of different ideas in one tower" concept.

Not sure why this has such a low rating.

It was a little easy, I don't think my health dropped below 75% at any point. The mapping is also a little basic and blocky and the lighting isn't particularly interesting, but there is a definite degree of charm in these maps.

There's some really cool stuff in here! I had to laugh when I walked into the huge outdoor area halfway up.

I guess overall it did start to feel a little bland towards the end, but I still wouldn't say it was a terrible experience. Hope to see more from you, working with what you have learned.

"I had to laugh when I walked into the huge outdoor area halfway up."
Thanks. I hoped that someone would get a kick out of that. When no one mentioned it I assumed it fell flat.

The lighting I never really thought about. If I do more mapping in the future, I'll try to do something more interesting.

Yeah, the ending is flat. As said in the deleted scenes article, I originally planned for something bigger and more interesting, but poor Half-Life couldn't take it.

This mod seems fine but please. Remove the furries

It lacks some detail and it is relatively easy to complete but still enjoyable; unlike TWHL Tower, this short mod works as intended.

Thanks for the kind words. :)

I guess it is a bit too easy, but in my defence, I'm not a fan of mods that are super difficult, or mods where it's possible to get yourself in an unwinnable situation. Maybe it's something I can work on if I ever do any more Half-Life maps?