REQUIRES GZDOOM 4.3.3. or higher Replaces all weapons, enemies and items with Star Wars themed assets. Gameplay is changed quite a lot, there aren't any hitscan attacks but projectiles typically move quite fast. Most projectiles are 3d models of Star Wars blaster effects. Infighting is also rare and usually only happens between imperials, aliens and bounty hunters (they won't attack their own team). The Icon of Sin is also replaced with a more traditional boss enemy, Emperor Palpatine. You can also find a lightsaber and unlock force powers, or even start off as a Jedi.

CHANGES FROM LAST VERSION
-New player class: Mara Jade, another popular hero from Star Wars Legends functions just like Kyle Katarn
-Weapon recoil no longer offsets the players aim
-Weapons now stay visible while using force powers
-Trooper class can now dual-weild pistols
-Bryar pistol's primary fire has been re-coded to trigger shoot-able decoration switches (such as the demon eyes in SIGIL), but their shots can't be deflected
-Saber throw no longer does extra damage on dark jedi and extra damage from battle-stim has been reduced
-Saber throw projectile now properly returns to the player
-Interrogation droids can now also perform the lost soul attack
-Imperial engineer sprite is now holding Ion blaster
-New DLT-19 wielding trandoshan (spawns with WolfSS)
-Rodian sniper and concussion commando and trandoshan now have sprites for their attacking rotations
-New sprites for Ion gun, Heavy pistol and Bowcaster by Willkuer
-New ally: Wookie Warrior, sprite made by myself with Trandoshan as base using parts of the Chewie sprite from Super Star Wars for SNES. Armed with their trademark bowcaster. Can be summoned with the Hyperspace Transponder
-New Enemy: Wookie Madclaw Bounty Hunter, similar to the warrior but they're evil, spawns with Revenants
-New Enemy: Imperial Commando with repeater gun
-New boss-tier enemy : Imperial Infantry Fighting Tank (or IFT-T), featured in Battlefront '05
-New ending screens for Doom 1
-Lambda shuttle has been removed indefinitely from spawning due to glitchy-ness, it still exists in the mod however
-Chainsaw replacement now spawns both lightsaber and shock glove, pickup still functions the same
-TIE Fighters now spawn with cyberdemons instead of spidermasterminds
-Updates to prop and texture add-ons

BIOWARE
Resources from: Knights of the Old Republic

ROGUE ENTERTAINMENT
Resources from: Strife: Quest for the Sigil 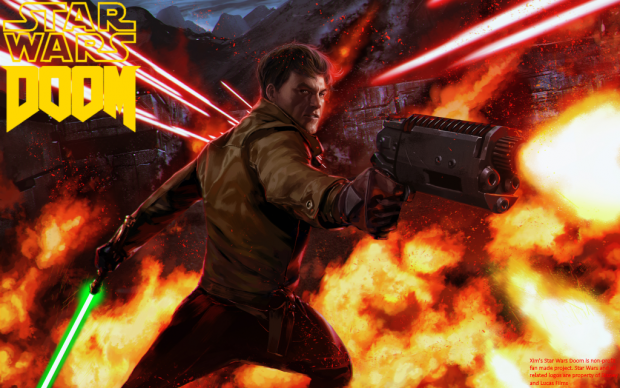 The new chapter of Star Wars has begun, thank you.