The Xenoforce Reborn mod takes the classic Xenoforce mod from CNC Generals and re-invisions it on the CNC3 engine with new units and new designs. The new armies that are currently scheduled to be in the mod are the Earth Federation, ZEON, the Invid, and the Earth Robotech Defense Force. We also have heavily modified the original CNC3 armies, giving the GDI, NOD, and Scrin a much more dynamic gameplay experience. This mod is NOT FOR PROFIT and NON-commercial based.

Greetings everyone! After quite a few months of hard work we have released Xenoforce : The Original 3 for Command and Conquer 3. This MOD is a total rebalancing of the CNC universe. This is the beginning building block for our Xenoforce Reborn mod and brings GDI, NOD, and Scrins designs to an entirely new level with new units and abilities.

The Xenoforce : The Original 3 mod came about because there were players who saw what we were doing with the Xenoforce Reborn mod and wanted to have the changes without the additional factions. Each faction now plays completly different from each other, giving a unique experience dependant on what side you pic.GDI is now all about deployment. Their power system and design revolves around getting different units onto the battlefield and using them in conjunction with each other to form a wall of power to crush their enemies. GDI has new units like the G15 Gunship Orca, the Titan Tank, and the Gunner Pitbull to help lead them to vicotry. 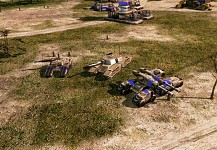 NOD is now about power. Their units have been redesigned around giving the player additional useage when they die while their special powers are all about causing as much confusion and distruction as they can. Finally, NOD's defenses are given a shot in the arm by generating funds on their own meaning a well defended NOD base is a well funded NOD base. 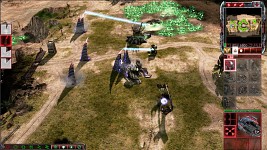 Finally, the Scrin have been redesigned to make their deployment as alien like as possible. Their defenses deploy with their structures. The defense tab has been changed to a CNC Generals style power system. This allows the Scrin player to modify their army to their choosing, picking some abilities and forsaking others. You can choose to give your units shields, generate large tiberium fields out of thin air, or to protect your entire base and all of your units by phasing them out of this reality for a short time. A Scrin player truly has the ability to surprise their enemy as you really never know what your going to be going up against. The Scrin have a few new powers as well, like the Blanket Ion storm that does massive damage to an enemy base along with new units like Harbinger Mothership that carries 4 specially outfitted Stormriders and has the ability to fire Dark Matter Warheads. 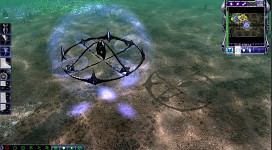 Finally, we have new Custom AI scripts. These new Xenoforce AI's have been modified to take advantage of the new units and powers that the armies now have access to along with new expansion and upgrade designs that make the AI more aggressive. These AI scripts will work on any map of your choosing. The mod is being uploaded to MOD DB as I write this, so keep your eyes open and we hope you enjoy!

I like where you're going with this, keep it up!

Sound great I think I need to check your other mod out.

Capitalization is part of grammar. Not spelling. So, they spelled it correctly.

I've noticed a couple of minor issues so far.

2. The Nod powers for the Nuclear Missile and Catalyst Missile appear to be reversed. Every use of the nuke destroys all refineries, silos, and tiberium spikes on the map instead of obliterating a base.

I will look at the scrin powers about that.

Nod gets a liquid tib missile for their super power now from temple of nod, not the nuke. Nukes are delivered by bombers now like the old catylist missile. I will double check icons and discriptions for it.

Have you tried deleting the replays directory for the crashes? Try that and let me know if your game still crashs. You're the first person to tell me that this weapon crashs the game.

I'm going to have to try the missile again on a different map and just see if there wasn't way too much stuff exploding at once.

Ok, completely deleting the folder and re-downloading fixed the icons and description issue for Nod, as well as apparently unlocking units that were missing before...

As for Scrin, I figured out it's just a limit of 7 upgrades per game, but I have yet to find out wtf I need to build for the Nightmare Pulse to trigger.

Any way Scrin can get their tier 3 defense structures back? No lightning towers makes for a sad Scrin.

Ok, mildly game-breaking issue for GDI: AA guns melt infantry faster than the anti-infantry defenses, but do literally NOTHING to aircraft. Seriously, they fire, but deal 0 damage.

I'm in the middle of figuring out how I want to add the Scrin Lightning Tower back in (definatly a great structure and very useful) for next weeks release. Glad to hear your stuff was fixed with a redownload.

The Nightmare pulse is triggered from the Stasis Bubble, I'm working on fixing the discription/icon to show properly what it does. I'm also adding that this pulse adds 25% to the health of all scrin units when it go's off, making it a dual use.

I'll look at the GDI:AA guns. I felt that they were overpowering a bit, but wasn't sure if it was just me or something else so I wanted others to play and tell me. Know I now. :)

Add the towers to tech centers, since that's what you had to build as the pre-req in vanilla anyway.

Nightmare Pulse is just going to be brutal to go with my 9 Mothership assault then!

As for the GDI AA guns...they have their AA range bonus when targeting infantry and that ludicrous RoF, but they fire 1/4 second bursts at aircraft for no damage...I had to test by force-firing on my own Orca =s

Heh, I played again and the descriptions are reversed for Nod, and I don't see the modified MCV on my build list any more...But you know, I do love that "spawn a crapload of obelisks" power =)

The general mobile suit sounds are all pulled from 8th ms team. I want more audio clips but don't have the time to rip them from the shows myself and Doug has been busy with his home life.

you guys rock keep up the good work