XHL/XDM is a Half-Life modification with quite a long history. It started in 2000 as a HL enhancement and over almost 15 years turned into a game comparable to Unreal Tournament! And a open-source modding platform

It is here, it is final!

This is not just a release, it is a long-awaited, shining, mind-blowing result of collaboration of greatest minds in Half-Life modding! :) 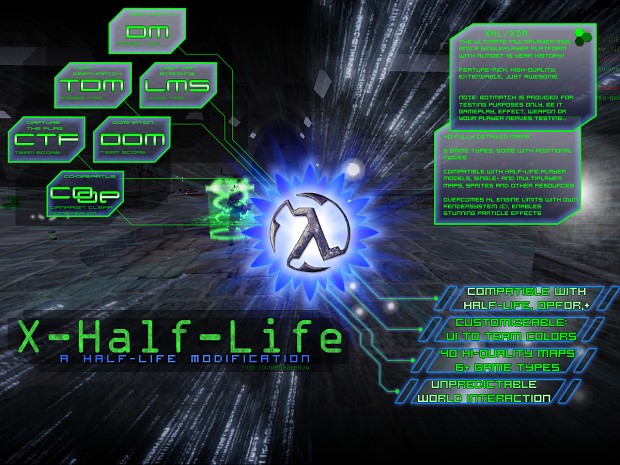 After so many years of hard work, this seems to be the final release. Way to perfection is endless, but I think XDM is now complete. With 40 multiplayer maps, 6 game modes and lots and lots of other features it is now almost a complete game of the scale of Unreal Tournament itself! But enough talk, download it and check it out now! Ok, some info...

Game: what to look at?

« Definitely one of the best HL mods ever! » - max-damage 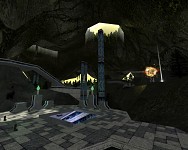 Besides new game rules, maps, models, weapons, effects and other obvious stuff, XHL features the one awesome thing which might not be noticed right away: unpredictability.
It means much freedom in interaction with game objects, especially in multiplayer games.
For example, most objects (from doors to monsters) may become team-specific, may act on behalf of a person who owns or activates them. See players getting score for smashing opponents with doors, platforms. Hacking sentry guns is also possible.
A map can define gravity which is applied to all entities, making different gameplay.
Projectiles may collide, explode, push other objects, teleport and activate buttons.
Can you imagine a map that is playable without weapons? Now you can: use traps, mines, turrets, tanks and trains as your guns! Challenge monsters or even play sequential levels in co-operative mode. Capture flags (or even cubes), take over control points. Possibilities are yours to discover! 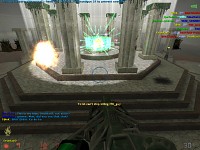 *Deathmatch/Team deathmatch*
Primary goal is to have best score. If frag limit is set, the game will end when someone reaches it. Time limit is also supported.
*Capture the flag*
Go to the opponent's base, take their flag and return it to your base. Primary goal is to steal more flags than your enemy team does. The game ends when any team reaches score or time limit.
*Domination*
Several control points are placed all over the map. Take the point and don't let enemy to touch it. Each control point gives your team 1 score point every 5 seconds. Hold as much control points as you can. The game will end when any team reaches score or time limit.
*Co-Operative*
If there are monsters on the map, your goal is to clear out the map. If the server has monster respawning turned on, the game turns into a monster DM with simple frag/time limit. If there are sequences of levels, which are connected with trigger_changelevel, it is possible to play together from the start to the end, being able to change the map only by gathering together.
*Last Man Standing*
Primary goal is to survive. The game will end when only one player left. Best player is the one with least deaths. Players join during mp_jointime.
*Revenge mode*
In any game type. If mp_revengemode is 1, a player will be awarded twice as much for killing his killer. If mp_revengemode is 2, you cannot hurt anyone until you get revenge on your killer (or he kills himself).

« XDM brings out the best! » - sloganizer.net 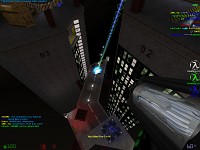 Certain types of damage may have different consequences:

Most of negative effects can be neutralized by using medkits and batteries. 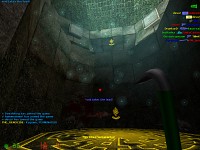 Just a brief look at most significant features:

I'd like to thank all the people who helped me in creation of this game. Everyone who supported me, with advice and a good word. Everyone who directly or indirectly contributed to this mod! I hope I didn't forget anyone in the readme. :)
Also, big thanks to the following communities: half-life.ru, hlfx.ru, twhl, xentax and ModDB!
THIS WAS TRULY A GREAT TIME!
PS: quotes are just4fun )

Wow! At last I can play and enjoy an extremally quality Gold-Source mod - DXM.
Thank you for a great job, bro.

yeah, DXM is the mod for everything :D

hope they will add bots support atleast for dm or tdm mode.

who? There are bots in XDM. For all game types.

wow that awesome tnx for the info!

A friend of mine (from XentaX forum) made a simple gameplay video: