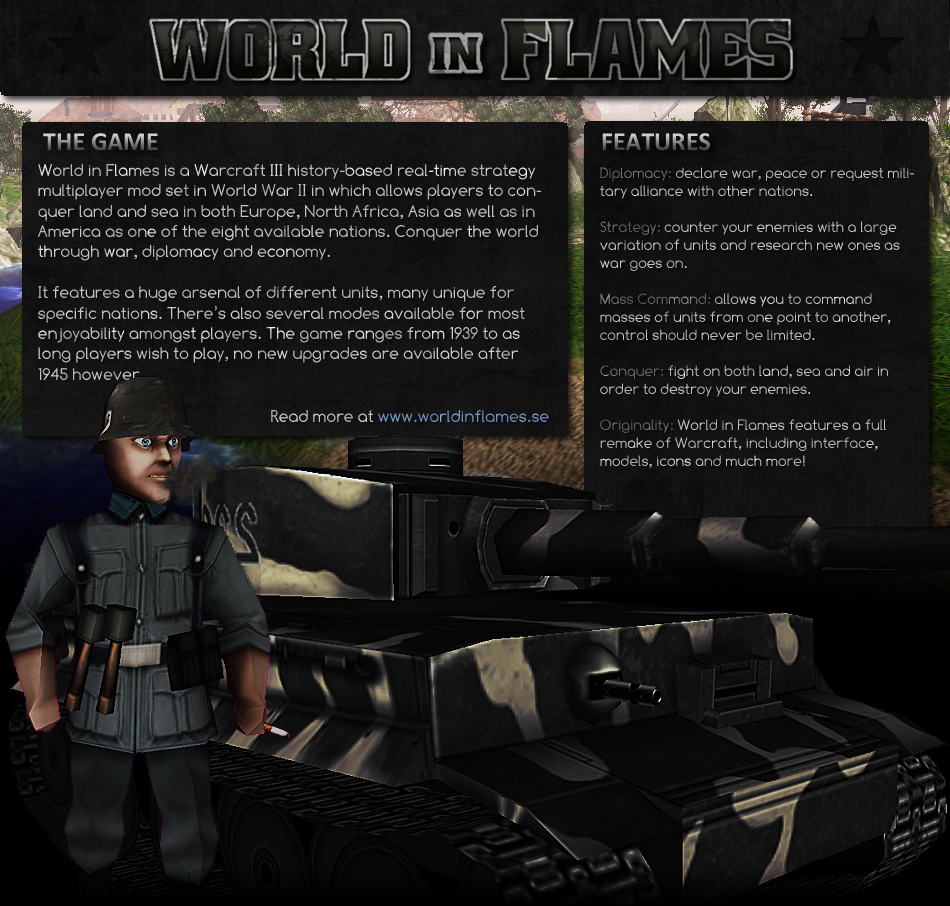 The future of World in Flames

First of all, I think we owe you all an explanation. Both in terms of what we've been doing, why you've barely heard from us and what comes next. Let me start off with a re-cap of what World in Flames actually was, and is.

World in Flames is a non-profit hobby project that has been going for over three years first started on the Warcraft 3 modding site Hiveworkshop.com. However, it was not us - the current team of me and Fingolfin who originally started it off.

World in Flames began as a map made by another user of The Hive Workshop. Fingolfin teamed up with the first creator to help reterraining the world. However, the first creator suddenly disappeared and was offline for many months. That's when Fingolfin decided to picke up the ambitious project and recreated everything from scratch.

As such the mod was revived by Fingolfin in the second half of 2010, and the mod you see today is in ways a continuation of the earlier project.

Fingolfin posted a thread about this new World in Flames in the modding community. It was that thread that grew to become the number three in Hive Workshops Map Development forum in terms of replies and views. At time of writing; 89,746 views and 2,619 repies. Just some weeks later in July 2010, Fingolfins excellent World War II models on the same forums caught my attention.

I contacted him and asked him if he was willing to share them for my own unannounced World War II project. However, as time passed we grew to become mates with many common interests and I found a big interest in World in Flames. It was the map I had always wanted to play, epic in scale and with many possibilites to replay or rewrite history through different means. I saw huge potential in the map and had many discussions with Fingolfin and provided many of my thoughts about it. Eventually I joined him in working on the map and the surrounding media, for example creating our website, and again World in Flames became a two-man project. And the rest of the story is all documented on this very forum.

So what's happened since?

We released a few patches, the last one being 1.3 in June this year implementing the much awaited paratroopers, another feature much unique to World in Flames. However, ever since we released the first version to the public we havn't had much time to work on it.

As mentioned, World in Flames is non-profit and this far has only cost us, mainly the upkeep of this website but also much of our time. Nonetheless, we've had much fun and gained a lot of experience working on the project and it is nothing we regret. We both wish we had the possibilty to put much more time into it, but we're simply too busy doing life and the mod is no longer one of our higher priorities.

And as much as we tried and wanted to continue the project, it is simply overwhelming and sometimes hard to go back and get into considering the complicated systems that surrounds it. It often feels like it's not worth the time involved. Considering that after all, World in Flames is only a mod, and that of a old and seemingly dying game.

This I guess is the subject you all want answers on. We've got both bad and good news. The bad is that at this moment it is unlikely that we will go back to the mod and work on it as much as we used to, mainly due to the reasons I explained above.

The good news is that we're looking into the possibilites of continuing World in Flames as a standalone game in the future. We will need as much feedback as you guys can give us. Fact is we have a engine that has been worked on now and then for around two years time. It's starting to look very promising and depending of how this goes we will be revealing more information on the subject.

Some positive changes the new World in Flames could see;

These are only examples of what would be possible, with many other ideas currently being planned to be implemented should we succeed. As of now we're only looking at the possibilities and this is not a project that will see it's dawn very soon. There will have to be discussions of how we would go through this and setting up priorities. We will likely open up recruitment to join our team and are mainly in need of;

If someone is already feeling willing and certain about joining, feel free to PM either one of us directly through these forums or mail us at admin@worldinflames.se or fingolfin@worldinflames.se. Please include some of your earlier work, portfolio or screenshots. Be reminded however that this is still a hobby project and at this stage there is no profit involved, we will all be doing this with our passsion on our free time.

Be reminded, this is currently only a dream that we've just started planning and looking into, there is no telling where this ends!

The american army is hardly a new faction in WiF, although with the recent completion of Northampton-class cruiser, we are proud to announce that they...

It happened in the split of a second: after almost a year of waiting and waiting the entire japanese faction was completed in less than a forthnights...

All work we've done since the last newspost, including open beta announcement!

All the work that's been made since we got ourself onto MODDB!

This is the latest version of World in Flames OPEN BETA (1.2b) released 31th March 2012. To install, move the file into Warcraft III/Maps/Download folder...

Really hope this doesn't die :). Looks great. I'll come back and say how good it is after I've played it.

Can I play this with bots?

be nice if u can make a cold war mode after world in flames cuz this was just to good and im realy llooking foward to other maps u guys will make :D

We can now announce that World in Flames OPEN BETA is finally releasing tomorrow, at October 10!

When I heard of this mod, I was like...Company of Heroes. Then, I saw the whole world you guys planned to add and it sounded very cool. Definitely tracking!

hey just stumbled across this mod but im glad i did it looks amazing (tracking) :D

Multiplayer
Tags
Embed Buttons
Link to World in Flames by selecting a button and using the embed code provided more...