Wonderful Life is a short and experimental art game designed by Thomas Papa, currently graduating from the Utrecht School of Arts (the Netherlands). It is a game about the goal oriented society we live in, a society that only wants more and more, and forgets to stop and smell the roses. A society that doesn't recognize, understand or appreciate what we have right now; that what surrounds us. You play a character that weightlessly floats through a system of tubes. You look at the world down below, the present. You look ahead into the distance, the future, and navigate your way forward. Like a work of art, it's about the emotions and associations of the player. The game is more about the entire experience rather than a set game goal. It experiments with narrative, aesthetics and symbolism. It will feature hand drawn game objects and generative music. Wonderful Life is a Total Conversion Mod (TC MOD) using the Unreal 3 Engine.

Thanks for voting and helping Wonderful Life on it's quest to become the 2021 Mod of the Year. You are now in with a chance to score some free games from our #modlove collection. Help this mod secure more votes by embedding the widget (or link) we have included below on your favorite sites.

Sep 26 2009 News
O n September 11, 2009, the Utrecht School of Arts held its annual graduation exposition. A day long event where all graduate students exposed their work to a large audience. I'm one of them! The hard work has paid off and I can finally call myself Bachelor of Art and Technology, with Honours. 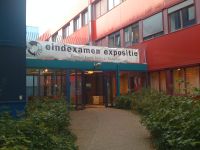 Main entrance of the Exposition.

This is the first time people had the chance to spend some time hands on with Wonderful Life. Besides a test audience used for play-testing purposes (consisting of 15 people of different ages and backgrounds) the game wasn't showcased to an audience before. Now, after having worked on it for quite some months, it was time for this new type of game; an Art game, to be experienced by the public. Since the Mod isn't released online yet (ETA November 2009) it proved to be an exciting day of getting response from a completely unknown and fresh audience.

Poster I designed for the Expo, in Penguin Classic style.

I set up a booth with two Dell XPS's running the Mod (not in Editor, but a TC Mod) and hooked up a beamer to one of them to provide a clear image for a bigger group of people. Since I have developed an "Audio Tour" option for the game, in order to provide the player with in-depth information, I had borrowed lots of mp3 players and iPod's in order to let the audience listen to the Audio Commentary while others were playing. 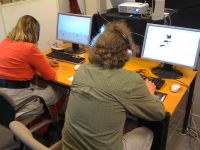 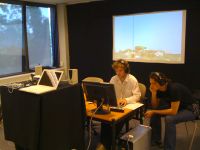 It was a great day full of new faces, overall the visitors responded very positively to the project! As the game is of experimental kind, short, and not in a well known genre (Art Games) it triggered many people to start discussing it and evaluating it. Some called it Art, others an interactive experience and others said it was a step into the direction where video games should be heading.

The feedback I got from players of all ages and backgrounds proved that it was a success, I'm therefore very eager to get the Mod out on the web. Currently I'm laying the last hand on the visual side and fixing some bugs along with my team. We plan on releasing it here on Moddb.com in November of this year.

I would like to thank everyone at the exposition and here online for their sympathetic and amiable words, its an instigator to develop more projects of this kind.

Progress so far and new screenshots

This news update is about the progress of Wonderful Life so far. Covering the development plans for this month (July) and some information on the recently...

In this first news post I'd like to take the opportunity give some more info about the project, its features and the team.

The second Beta release of Wonderful Life is here, v2.0. If you are into artful game experiments then grab the download and try it out! All functionality...

After long hours of tweaking and bugfixing, the first Beta release of Wonderful Life is here. Grab the download and try it out! All functionality will...

ya all the questions are from 2009 so I'm going to re-ask this befor I download dose it work for steam?

I wanted to try it out cause I also love artful game-experiments!

But as projektariel I'm not able to run it. I have Version 2.1 of UT3 on STEAM. Maybe there are problems with the Steam-Version? I did what was mentioned in the Instructions-file but when I click on any of the .bat files, a black command-window appears, then the Steam-Window saying UT3 is launching and then nothing happens.

Is there any way to launch it with the Steam-version at all?

Sorry for the inconvenience. To answer your question, please read the comment I just posted in the Download section.

Which version of the game are you running + does anyone know about backwards compatibility issues? The mod was developed with an older version of UT3.

Unfortunately UT3 crashes every time I start WL via one of the *.bat files... is there maybe another way to run it or do I have to wait for the UDK version? :/ Would really like to try out this mod! :)

this mod looks interesting, but in belgium, we have a datalimit

Dear all, the Beta version of the mod is coming this evening, if all goes well, around 22.00 GMT+1.

Fingers crossed we don't see any bears on the road *which is an expression directly translated from Dutch to English :-).

All functionality will be in it, with it being a Beta version it could need polishing in many ways but it will be playable as designed.

Our (perhaps redundant) disclaimer: Do mind that this Mod is a small art experiment, developed both at school and in our spare time, not intended to be shiny or to your liking. Hence, it is intended to be a small step towards more artistic games which encourage the player to consider what the game is trying to convey.