Finally, it has arrived! Permission has been granted to bring you the famous Witch Hunters: Adepta Sororitas mod to Soulstorm in the form of a standalone race! Released for Dark Crusade back in 2007 by Friedric_P (plop!) this mod brought simply astonishing visuals to the battlefield before disappearing into mystery. Now, nearly a decade later, permission has been granted to release this mod by the great man himself, the only caveat being that we respect the original work. However, this does not stop us using the available assets to produce a mod of branching tech trees and multiple strategies to bring His holy judgement against your enemies! Battles begin with those stalwart lawmen, the Adeptus Arbites patrolling the area, but if trouble starts (and it probably will) then they can always upon the power of the Sisters of Battle lead by the devout Canoness, or maybe the mighty Inquisition will send the throne of judgement to help root out corruption at the source. For the Emperor! 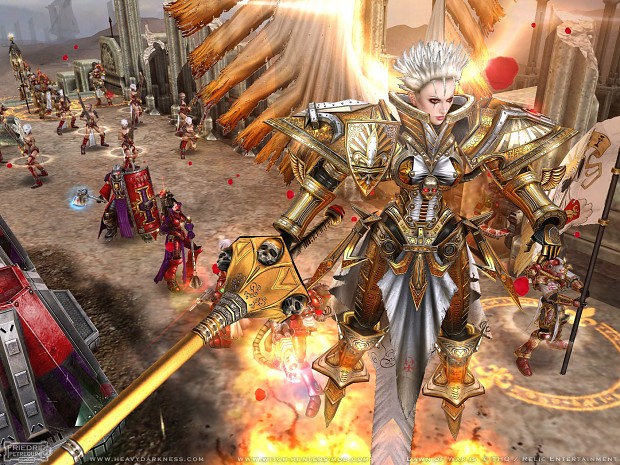 The Emperor's Light shines upon you and the whole community today ! :D

At long last, finally for Soulstorm eh?
Heheh, I wonder how Witch hunters will fare againts Deamon Hunters and their fellow sisters, Dark Eldars, Black Templars,etc. xD
I certainly hope it will be compatible with mod combiners.

Have you had any issues with game rules not functioning after downloading? Using Combiner with all/most race mods.

Issue solved, just be careful of which order you add race mods in the Combiner mod list.

Yes!!! This is awesome! Thank you!

Holy Emperor O_O ! It's truly awesome, too bad I didn't know about this sooner