A very disturbing and irresponsible wad that was made to make you ask yourself the primary question: "What da' fuck?" Want to be a crackhead? Have you always aspired to be a urinating clown? Wanted to grow up to be a brony decapitating Lucha-wrestler? Do you like exploding bongs? Do you like chaos? Do you like mindlessness? Do you enjoy catching old ladies in hover-rounds on fire? Have you ever dreamed about being an underwear-clad drunkard with a magic forty ouncer? Ever wish you can PLAY an acid trip? Then play WhatDaFuck, faggot! Tell us what you think. BTW, if you're soft and easily offended, this wad definitely isn't for you. Don't say I didn't warn you. Anyways, enjoy. GAME CREATED BY: DON_WEST and DAGRIMREEFAH. PUBLISHED BY: ILLUTRANS. CONTRIBUTED BY: ILLUTRANS and APOLLO. TRAILER CREATED BY BLAKE STONE.

Thanks for voting and helping WhatDa'F*ck WAD on it's quest to become the 2021 Mod of the Year. You are now in with a chance to score some free games from our #modlove collection. Help this mod secure more votes by embedding the widget (or link) we have included below on your favorite sites.

Most importantly, The TOKE N' PLAY SERVER THAT YOU ARE ALL WAITING FOR IS FINALLY HERE TO PLAY ONLINE! All you have to do is download the latest version of Doom Explorer, and if you have it already then look up "Toke N' Play" until you find something like this 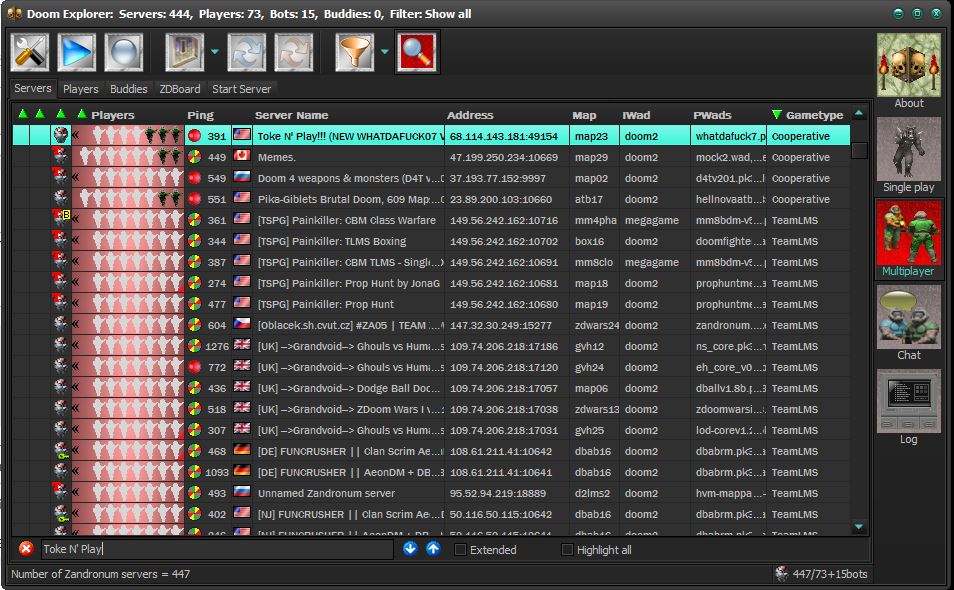 Remember to check out the WhatDa'Fuck's Soundtrack when you feel like listening to it when you are on the go or something like that.

Ever Love to listen to the soundtrack of WDF ever where you go? Well, guess what, mang!? WDF soundtrack is now on Youtube and Soundcloud for all the fans...

This Game was released on June 28, 2017, and it solely runs on Zandronum because that's where this game is going be on. In the future, This game will...

This Game was released in October 2014 and it soley runs on Zandronum because that's where this game is going be on. In the future, This game will be...

This game was released February 15, 2011 and this game only runs on Skulltag. Always remember to render the game on HardWare (OpenGL) because if you don't...

This is the First WhatDafuck wad ever. It was released back in 2008. It was notably known for it's "Toke N' Play" server back in the Skulltag Days. Many...

will this mod ever get an update? the level where you shoot up a brony convention was pretty funny

Love this mod! Will always be one of my all-time favorites.

Thanks brother. Be sure to recommend this wad to others.

Anyone know if dear old grim is still alive, a bunch of his old friends are looking to reconnect.

Let's take this to DMs

I believe you a trying to run WDF on the wrong Source port. If that is the case then no worries. All you need to do is run the mod on Zandronum Version 2.1.2 or 3.0 (Highly Recommended version): Zandronum.com

The Association of Twin Blood Dragon