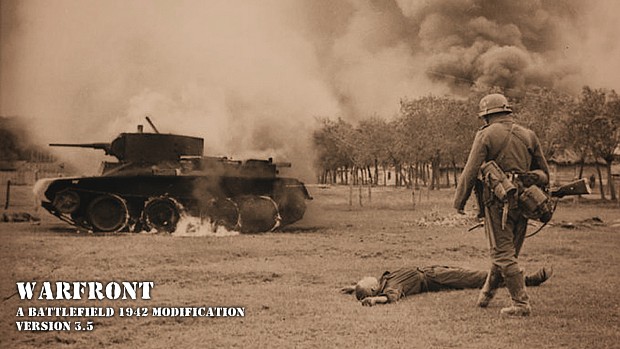 I've been waiting for so long, thanks a lot budy, good job

Great news! Downloading it now. I've been playing the last version and I have a question. When I drive my tank near an ammo box I just see an icon in the lower right appear, with ammunition and a curved arrow on either side. I stay there with my tank but I do not restock with ammo. How can I do this? Thanks for all your hard work on this mod!

Most tanks will restock ammo automatically. If you are in one that doesn't, please post what tank it was and I will fix this.

Maybe I did not wait long enough. I will try again and let you know. My foot soldiers reload instantaneously, so I didn't wait that long in the tanks. I'm pretty sure it happened in a Panzer IV on Prokhorovka among others.

This is a wonderful mod! It's quickly replacing BG42 and FHR as my favorite! All I need is the ability to have 255 bots in coop multiplayer and a few more maps for this to be absolutely perfect.

Using my own account to reply now. All tanks seem to have the same problem. Tank cannon ammo is always at 1. When you fire, it goes to zero, then back to one when you have reloaded. MG ammo has a limit, but when you run out, you cannot restock at a crate. You just sit there and nothing happens. I have noticed this in any tank I have tried to restock. Seems to be a general problem.

Tank cannon ammo is supposed to always be at 1. You have 1 shell in the breech of the gun at any given time. Your magazine size is the number of shells you have, total, in the tank. This is represented by the bars, and will go down as you shoot. The tank MG reload has been fixed and will be in the next patch, my apologies.

That is great news! As a big machine gun user, this will make the mod perfect!

Map crash on the "Bocage" Map, kick back on the Menu.:(

How do I get the 128+ bots to work? I go to single player, instant action, and put bots on 1600%. I only get 63 bots :( What am I doing wrong? I tried multiple maps, no luck. I launch game directly from Warfront shortcut.

Is there a way to reduce amount of crashes? I dont know if it's my or the mod's fault, by i often have game crashes while loading random maps. Sometimes you have to try few times, and then map loads after few crashes, and sometimes its impossible to even play on this map.

without a better description of the problem (which maps, which mode, was it a clean mod install, what version of BF1942, etc.) I can't really do much.

gonna try to redownload but its annoying

looks great i gonna try this mod out thanks for the great work.

This looks great! Before I download - will it work with my SW/RTR expansions too?? Or just the base game?

all maps crash single player, why?

I did the installation as recommended, I placed the warfront folder inside the bf42 mod folder

a nice mod,i am glad to see it's alive

which server plays this online?

what is the code……