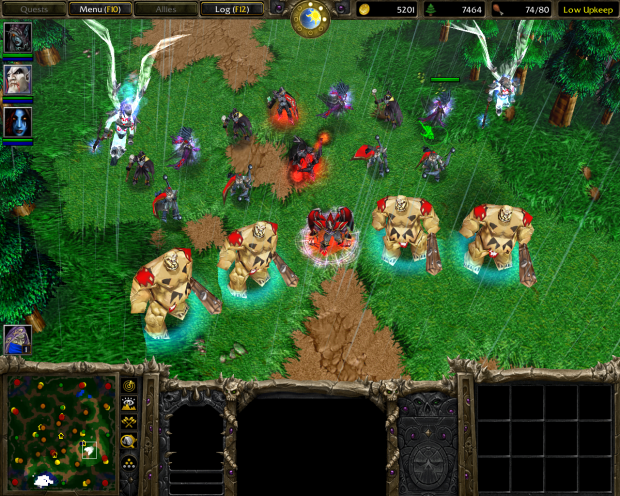 One of the two faction altering upgrades the Undead will have is 'The Black Lady', which is available after upgrading to Halls of the Dead and summoning the Graveyard and Tomb of Relics.

Upon researching, it increases Banshees' hit points by 35 and mana by 10%. Crypt Fiends, Frost Wyrms and Necromancers are replaced with Fallen Rangers, Val'kyres and Apothecaries. Death Knight and Lich are replaced with Dark Ranger and Master Apothecary, while the Crypt Lord and Abominations are lost.
The only heavy melee unit are the Stonemaul Ogres, the ones Sylvanas gets control of after one of her Banshees posseses their leader Mug'Thol. They are available after 'Pretty Ghost's Ogres' upgrade is researched in the Black Citadel. They are trained in the Slaughterhouse and can also learn Crushing Blow ability with gives them a 25% chance to deal 35 bonus damage and stun their target for a few seconds.
Also Fallen Rangers, Apothecaries and Banshees can learn Vengeance ability, which allows them to spawn a Specter upon death, which is a weak ranged ghost that deals magic damage.