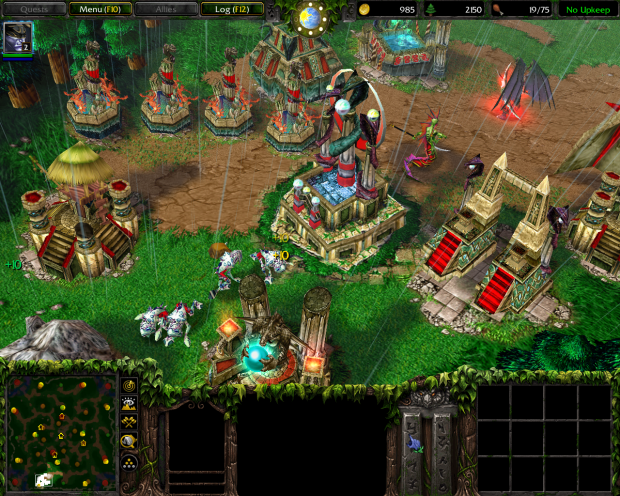 One of the biggest faction and game changing upgrades is 'The Awakening'. Available upon upgrading to Tree of Ages, building the Hunters' Hall and summoning the Demon Hunter hero.

All units are replaced with their Naga equivalents and the Demon Hunter gets Ilidan's model from The Frozen Throne's campagin and 100 bonus hitpoints and mana as well as 5 bonus attack.
Keeper of the Grove and Priestess of the Moon are replaced with the Sea Warlord and Naga Sea Witch, which is removed from the Taverns and will be replaced with a new mercenary hero.
Early in the game, the Naga are fairly weak and require a good economy to train their heavy, mid and late game units. Upgrading to Tier 3 is therefore essential as it allows unique economy upgrades to be researched in the Slave Quarters building, which also provides a drop off point for lumber and researches Naga weapon and armor upgrades.
Tier 3 also gives access to Dragon Turtles, Hydras and late game unit upgrades which unlock powerful passive abilities.

Note: Naga caster upgrades are analog to the Night Elven ones, meaning that if the level of, for example Druid of the Claw training is Adept, the caster level of Naga Sirens will be Adept after the change as well. Same goes for the Abolish Magic upgrade.