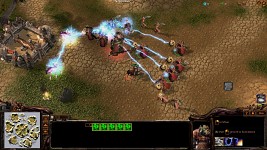 Chain ligfhtining of elemental shaman, that makes massive damage output in the battle.

Compare with the 1.0 version one year before, it is has much more better graphic, that is due to the using of normal maps on units, building and terrains.

Not just graphic, but also the gameplay is improved. Critical, Parry, Dodge system makes the battle more alive, warriors have wound animation when got critical attack from the enemy; footman raise his sword when successfully parried enemy attack; Nightelf Archer will easily dodge the piercing attack when under Monkey Aspect etc. 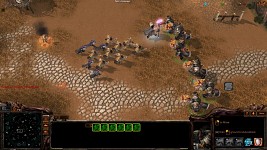 When one year's upgrade, the WAH 2.0 now added Burning Legion and Undead Scourge. The two new factions are both distinctive and interesting:

The Burning Legion are formed by Fel-orcs, Fel-elfs, Broken Draenei and Demons, which it is strictly follow the lore of WOW. At the beginning of the game, player can only train 'mortal' units from Fel-orc Barracks, the Demon units are only trained in Dark Portal, which is also the tech building. The Demons did not cost gold or mithril, and can be trained instantly if there are enough pop supply, it sounds terrible, but player can only build one Dark Portal and train demons needs Demon Points, which is generated at a very slow speed. The Fel Hound and Succubus cost 1 point, and Fel-Guard, Voidwalker cost 2. So the demons units seems to be a free gift to the player, but it also need to be used wisely. 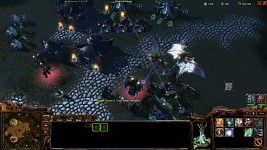 There is day-night circle in the game, there will be torches lights up during the night.

Another important feature of Burning Legion is the legion horror system: Chaos-Grunt and Fel-Guard can get 1 level of legion horror when he uses heroism strike to attack enemies. When the buff stack into 10 levels, Chaos-Grunt will transform to Blood-Guard and Fel-Guard to Wraith-Guard, it sounds similar in WOW warlock's talents. This system mean player should keep theses units alive and let them grow into stronger one. 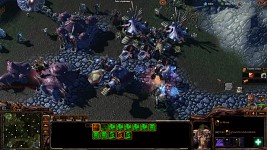 The Tauren Warrior is defending the horde base.

The Undead Scourge, although most of its units came from Warcraft III, like ghoul, crypt fiend, gargoyle etc, the Scourge have many new features that come from WOW: an upgraded Necromancer can transform a ghoul into a giant zombie temporarily; Valkrie Twin provide different auras and died together; The Abomination can grasp an enemy unit to him like it is Dota; The Bone Guard has ultra ability of Bone Storm, destroy enemies like he did in Ice Crown Citadel. 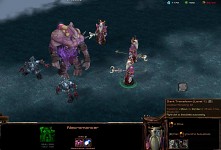 The Necromancer can transform a ghoul into a giant zombie, like deathknight of WOW.

The Undead does not have any upgrades on attack or defence of its units, it only focus on the Blood Plague: At the beginning, Blood Plague is just a debuff of -5 life regeneration, not very strong, but there are 3 upgrades for it, Corpse Explosion will let enemies that carrying the plague to explode when he dies, Quick Act let the enemy get 50 damage when he begin to catch the plague, and Suffering will let enemies who catches the plague have 5% to stun when under attack. For the Undead, there are many units can spread Blood Plague by attacking, and the Blood Prince has more efficient methods: he can cast Plague Explosion to spread the plague to massive enemies, and when he is upgraded to the master level, he can summon Plague Hound, to attack the enemy and the hound will explode when killed or time is up.

One 3V3 melee map, has many landmarks of Ice Crown.

For the Alliance and Horde, there are also many new features: More famous heroes comes like Varian, Tyrade and Garrash; Siege units available for both sides, the Alliance even has the gunship of WOW -- Skybreaker; Peons finally learned to get into Burrow, Burrow and Tower can be fortified temporarily; The Gryphon Rider now has his campion -- The Daughter of Sky -- a dwarf girl riding a snow white gryphon, as a priestess in the sky. 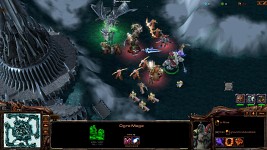 Strong creep's battle would be more epic, and also the item it drops.

Besides the four factions, there are still many upgrades on the game, like neutral shop, legendary weapon, mercenary camp, achievements etc, player would enjoy from these interesting features. 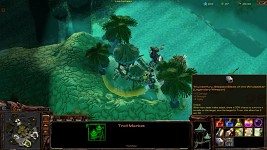 Neutral shops on the map would provide many useful items, rush to purchase them.

How to play the game:
By now WAH 2.0 is available on US, EU, CU server(Korean server is uploading). For SC2 is free now, player can play WAH 2.0 without paying.
1. Register a free Battle-Net account.
Us.battle.net
2. Download the SC2 and install it.
3. Log into the game, click Arcade and get into the Arcade page.
4. Search 'WAH' on the text box of the top right, you will find all 6 melee maps. 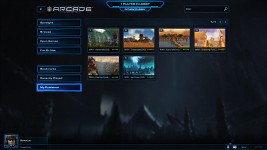 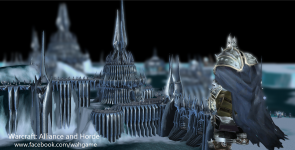 The Lichking stands before the Ice Crown. 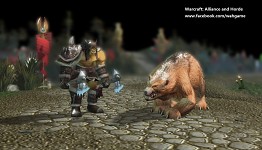 Happy New Year!Thank for your support in 2014, good luck and have fun in 2015.StevenLuo

Thrall will comes in a latter version of WAH, and there will be much more exciting new features in the next year.

2V2 Battle on us server

17 min 2V2 battle on US server. The Alliance side perspective, use Druids and Steam Tanks.

Is this Mod still alive?

how heavy is your mod? its taking forever to download O.o

I'm waiting your mod at Southeast Asia Server because right now is not possible to load you maps through US server.

Havent played in a while and noticed that the mithril gathering rate is extremly slow. Is it intended or was it broken with the recent LotV update?

Nevermind, gathering rate seems to be fine, its just the animation that has kinda mislead me.

I think it is not

i think than this mod is over

Starcraft The Final Frontier Starcraft II: Heart of the Swarm