This is a hotfix for The Final Nights Version 1.6 HD.

To install, simply unpackage the self-installer on top of TFN 1.6 HD. You will NOT be required to start a new character after installing this. 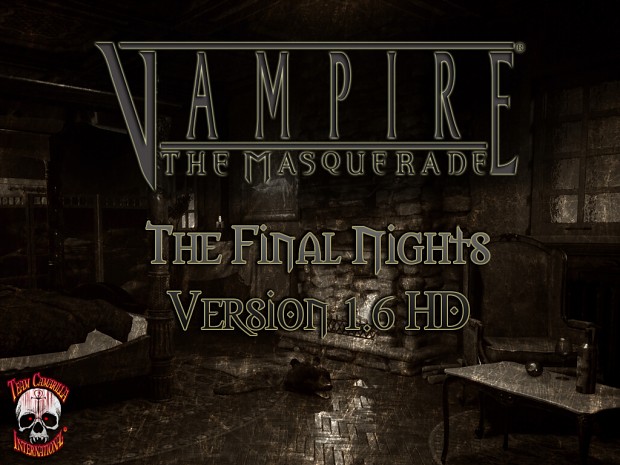 I don't have that much knowledge, but is it necessary to download the previous one to download this one? Also, can I ask them to recommend a place that talks about the tutorial on how to download mods correctly?

Yeah, you'll need the full 1.6 version installed first, then install this hotfix on top of it (same file location).

The Bloodlines community mostly resides on Planet Vampire. There is where Wesp, Burgermeister, Child of Malkav, etc... all hang out and they pretty much know everything there is to know on Bloodlines and mods. If you're looking for a tutorial of The Final Nights, you can download it here in the .pdf format.

Thanks so much for the tips!
Unfortunately the latest game translation for my language won't work on this DLC, as no one was interested in continuing to translate, but I'll try it anyway.
Grateful for the speed of response!

You're so welcome! Which language are you translating Bloodlines into?

I don't know your preference on bug reports but the first obvious one I've encountered is Jack in the anarch bar when I go there for the alliance right before griffith park.

His dialogue treats the player as if coming fresh from Santa Monica and then immediately follows with the post-grout grilling. I don't recall offhand what his dialogue there normally is, if any, or if he's even there, but this was plainly incorrect.

My playthrough specifics if unable to replicate: Female, Baali, "joined anarchs" (or so I told Damsel).

One more bug - You lose the fists of vukodlak during the santa monica blood hunt if you go into Mercurio's elysium area and leave (I assume there's a typo or something because the item message appears up top but it's blank).

I thought they would maybe come back when I went to a new area but it seems like the fists are perma-gone once lost.

Edit: Ironically, you also lose the fists upon entry to the chantry if either siding with Strauss or visiting your chantry haven during the end run.

Edit2: If anyone else seeing this loses the item I believe the console name is item_w_zombie_fists if wanting to re-add it.

Wow! Okay, thanks for letting me know this as well.

Seems that the toggle first/third person isn't working is this intentional?

Any chance we'll get to see a female Samedi sometime? I love the Samedi clan, but much prefer playing a female.

Thanks again for the amazing overhaul!

Not unless someone steps up to create the new model and skins.

Thanks for the kind words! :)