The amazing power of modding has changed the way we play games and has opened up entirely new worlds which the original game producers couldn?t have imagined existed. Morrowind, and now Oblivion, is one of the best systems for modding because you can layer as many mods on top of each other as you like.

'The plan with the Void is to start off with an entirely unformed world' ? A big lump of clay as featureless and barren as possible. Designs, plans and guidelines will be posted on this website to show everyone what we?d like to see happen. We will upload the first blank and empty version of the world for everyone to download, then anyone who wishes can add to the world ? Be it a house, a model, a sound or with some landscaping work. We will play all of the mods which are sent in, looking for mods which add to the world most and once we have enough we?ll combine them all into one file and release it as the next version of the world. We will then accept a whole load of new mods which add to the updated world and once we?re ready we?ll stick them all together and allow users to down the next version.

In this way we?d be creating a truly community built world ?it would allow anyone who wishes to contribute a chance at carving out a small part of the world without committing to a huge workload. The tiny details you leave behind might make someone else?s contribution even more amazing, likewise if you prefer to carve out mountains and seed forests you may be fascinated by the way other people choose to build upon the ground that you created. And once the world really begins to take shape and your playing it through to enjoy a different experience to Oblivion you may turn and glance upon a flower which you remember placing by the side of a street ? secure in the knowledge that you have helped build a new world.

From the centre of the world a city will bloom, an oriental and beautiful place with an ancient past. In order to create a new world the focus will be on creating somewhere which reflects a feudal Japanese society. But this doesn?t mean that we?re not open to suggestions, very little will be set in stone and the only requirement for the world will be that it represents a very different experience to Oblivion and that it be a tougher and more deadly world. And in this world, honour is incredibly important ? your choice of weapon, your activities in private and public and even the company you keep will reflect your honour rating which will operate behind the scenes. Sometimes, the easiest path will prove to be dishonourable ? which will effect how others will treat you.

The player will begin his journey as he regains consciousness amidst the wreckage of a ship, his crew mates having already been removed from the area and thrown in a jail; (Sounds familiar? It?s roughly based on Shogun, a book by James Clavell.) Which way the player chooses to survive in a foreign and dangerous land is entirely up to them, but all paths will lead eventually to an overall plot dealing with a child emperor who is threatened from all sides. Will you be the one to save the child? Or will your blade be the one that ends his life? Will you triumph in battle, storming the gates of the palace or will you creep into his dormitory at night and put an end to him with poison? The choice will be yours.

Howdy everyone. The Void has been progressing smoothly since our last update, which is seeing our world truly begin to take form. Work on our grand capitol city has commenced with the complete layout completed and several areas well under construction with more models from 3dchaya and the Tsyuma Castle project. We have also been working hard to complete the first section of our main quest story line, which will be the focus of our first planned demo.
Here are some pics of the emperor's castle made by myself and a town currently being detailed by one of our new mappers, StormAndy. 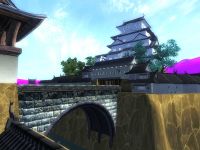 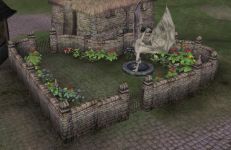 Our lead music composer Mirrored has also completed a new battle track.
Sharebigfile.com
We would also like to welcome our other new members to the team, however we are still looking for members in all areas of modding to help us further develop this great mod.

Hi there. We would like to present some of our new models, that we have avaiable in game - a Toshodaiji temple, a hall, a shrine house and Pagoda. Those...

Hi there. We would like to show some of our new models in game - the Ginkakuji and Izumo temples. We have also joined forces with Akavir team to bring...

Hello to all you dedicated Void fans out there. We’ve been having a quiet period for a long while now where we haven’t been nearly active enough on...

Mon are the symbols which each clan in the Void are recognized by. MiideraSect has been hard at work coming up with symbols for each one of the eight...

This is the low resolution version of the Mystic Staff - Rotating to show it off in it's full glory.

This is the low resolution version of the Mystic Staff - Rotating to show it off in it's full glory.

Is anyone gonna post news because there hasent been any news or comments beside mines for years.

for get my last idea.it sucked.well the haunted house was good put not the portal.

We can create a haunted house that has a couple of quests to complete the puzzel in the basment.A portal would open and leads to the world of sithis from the the darkbrotherhood from oblivion!If somone wants to use it feel free.

I have ideas for it but i suck at moding

Since there is no"LORE" involved in this, will Modern and futuristic designs be accepted?

is it all going to be based on Japanese culture? because the pictures seem to say so. or is it that those are the only ones you have yet? because it would be awesome to have Japanese vs English wouldnt you say?...maybe even muskets!

Is this mod dead or there is still hope for it to be rebirth? :)

Well, we were planning to use mostly Japanese inspired stuff, but not only. Unfortunately, this project has been sucked into the void...
If you want an Asian themed mod for Oblivion, Akavir is the way to go (at Silgrad Tower forums):
Silgrad.com

Thank you very much for posting this. :)
Regards.

Ah, I see the background problem OLDMANwitASword had.

The LOD bug can be caused by all sorts of things. I found some information over the past year on it and custom mods. PlanetEdlerScrolls, TESSource, and Oblivion Source all have some info regarding it but to sum it up. Here's most of my gathered info on it from my own personal modding, group modding at PlanetOBSE OBIV ED, and friends.

Conflicts can occur in all of the following folders, programs installed, or files within these locations can cause strange Mip LOD bias problems.
"AKA" - RivaTuner or NVTweak LOD Bias Adjustment tentatively set too high when overclocking and ZBuffer compression enabled.
"AKA" - Busmastering Overlays through Nvidia and NVStone Display Configurations


Conflicts can occur in all of the following folders or files within these locations causing the "land of the pink knights."
"AKA" - C:\Program Files\Bethesda Softworks\Oblivion\Data\Meshes\Landscape\ ANYTHING .LOD or in a LOD folder with a .NIF animation being too large (above 10.9MB)
"AKA" - C:\Program Files\Bethesda Softworks\Oblivion\Data\Textures\ Any deviation or custom variation of a "LandscapeLOD" folder containing .LOD or carrying within an LOD folder with an .NIF animation being too large (above 12.8mb)

Treat it like a baby if you're doing this all @ once. Don't be afraid to use several ESP's to keep the sizes down. Oblivion dislikes new environments and expansions strongly. Especially, when used in conjunction with each other. Make sure you've got the KOTN esp off. It's kind of nasty towards the other data files. Don't know why.... I'm assuming you're making this entire thing off of ESP's and so forth. As OMOD is usually incompatible with other works and later modifications resulting in the uninstall reinstall. Which just isn't worth the extra 30 hours. And upsets an awful lot of people too when you make a mod like that. So disable the other ESP's you've got, have your coder check your engine's range, make sure your mapping is small and tidy as the bigger it gets the more FORMID's, and stay away from including anything from TESIV:SI ...... :crazy: (buggy POS)

Whatever the case I do so hope you continue working on this. All the best dudes.

The Legend in the Sky Elder Scrolls IV: Oblivion