Diablo 2 is old but not obsolete. This amateur mod aims to present enhanced adventuring experience—darker atmosphere, better item availability, more challenge and less grinding. With various classic Diablo 1 elements involved and substantial content improvements, it focuses on shaping Diablo 2 into a rejuvenated game of horror, strategy and diversity. In addition to fixing a few major bugs in original game, main features are listed below:

There are only two language versions: English (default) and Chinese (optional). After unzipping TSW mod pack, copy mpq file from language subfolder into Diablo 2 directory according to your preferred choice:

Before introducing my humble modding, I would like to give my special thanks to The Phrozen Keep staffs and members for all tutorials and resources. TSW will never come to being without their share and help. All credits go to them.

TSW is based on 1.13c and primarily for veterans, thus you are expected to have defeated hell difficulty in vanilla Diablo 2 and seek to advance your journey. However, in order to stay away from legal trouble, there is no private server in spite of its promotion for popularity, and please play multiplayer games over TCP/IP or Hamachi. Admittedly, I realize the lack of realm/server means the problems of players gathering and match-up, as a result hell difficulty is not designed to be too hard for a well-prepared character to overcome, including act boss fight.

This mod has been developed and polished over a decade, and until now I believe it is complete enough to be published. Generally speaking, characters and items are remarkably weakened and monsters are massively enhanced for the purpose of challenge. Hell difficulty is the very core of this mod, careful and skillful play will prove yourself a worthy hero who can fight alone in most areas, but team work is still highly suggested if you want to defeat the Prime Evils in an easier way. In other words, TSW is designed to be single player centered with slight emphasis on multiplayer.

One of the biggest differences between vanilla and TSW is most items which cast or grant skills are gone. I understand it is a significant change many players can't accept for the sake of strength, safety or build variation, but I insist on doing so. I strongly disagree the classless concept, and that is exactly what Blizzard implemented to facilitate for item-hunting in expansion, especially after patch 1.10 where players can use several exclusive skills from other classes at the same time by high-end rune words. That is absolutely absurd and overpowered. Skill trees shall be unique to each class and you can't learn them by items. In terms of character developing, classes have to be meaningful distinctions and truly different, and you feel and play differently with their inherent pros and cons so that the game would be more interesting and divergent in thinking and fighting. Also, classes with different pros and cons make team play more appealing.

Creating a new character will bring you full experience of role-playing, but note that this mod sets great limits for mobility and gold/potion supply, so it is much harder than vanilla game play in the beginning. A few feedback complains about this and let me explain. In vanilla setting, characters will never run out of stamina when they reach higher level and consequently modifiers and skills concerning stamina are almost useless. Similarly, the abuse of potions makes healing skills and modifiers play insignificant roles in combat. Vanilla game play just lacks minimal attention to these role-playing factors. Maybe stamina system is not a good design in a retrospective view, but it is my basic idea about TSW that if you can't remove it, refine it. I dislike overly nonstop killing and would like to address recovery and resting elements after each battle. If you suffer from low mobility and short supply, slow down your pace of fight, take a timely rest and use healing skills or scenery objects. Simply put, you have to stop speedruns and learn to be cured by some means other than potions.

My personal advice for anyone who tries to challenge greater evils in TSW: master the class you choose to play. Improve your knowledge of items and skills, play with caution and strategy, and you can stand a chance in Hell difficulty. Actually the enemies out there are not too hard to handle as long as you get used to a complex battlefield, but always think twice before you act. TSW playing is made up of an infinite amount of making choices, and sometimes even the smallest decisions can change the results of battle.

To save your time for leveling and quest completion, characters from vanilla Diablo 2 are compatible, and just remember to update old items in the cube for new properties. It is not a fair fight to equip your hero with something which is extraordinarily powerful but never exists in TSW.

Knowledge is power. Take some time to read pdf files in documentation folder packed in mod for detailed item information, so that you may have clear ideas to prepare proper gears for battle. So far I have no time for a wiki or web site, and those pdf files are the only available references. Sorry for any inconvenience this may cause.

Tempered item is an abandoned project prior to the official release of patch 1.10 and I reworked it in TSW. It is not a new item type but a concept of extra enhancement for all items. Just like crafted items, tempered items are generated by cube recipes but featured with fixed and unique benefits.

As utilities outside of closed Battle.net, character/item editors are neither forbidden nor approved. To use or not to use, that is not the question and totally up to you. I respect legit players who have zero tolerance for cheating, but I have no intention to take a strong and rigorous stance on editors because potential cases of reasonable use such as build/stuff testing are acceptable and should be allowed.

In all, TSW is an old world with new contents and concepts. I hope players would find their own niche and enjoy dark fantasy in this diabolic realm. Any feedback is very welcome. 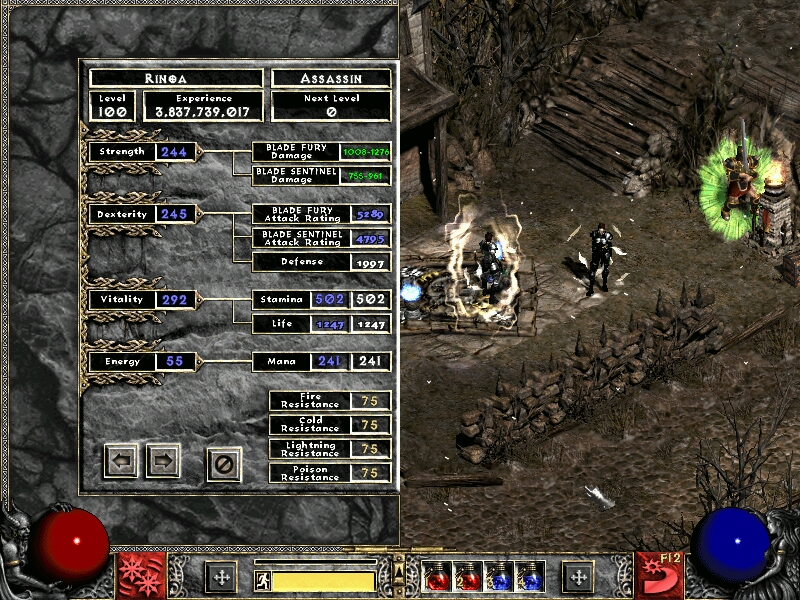 This update is one month after the release of D2R: Resurrected, and many players presumably expect a different mod on a new base, but due to official...

Before the coming release of D2R, I hope this update is the last and best version for D2 legacy. Away from patch 1.14d, TSW is based on 1.13c again because...

This update is to fix an unexpected visual problem for a complete set with 5 or 6 set items. Here is the thing: items after tempering generate at least...

Just a minor update and hotfix for what is missing in previous version. Most changes do not add new contents but revert to vanilla setting.

very strange cursor behavior in this version. When trying to pick up an item, the cursor jerks uncontrollably and it is very unpleasant to play

Sorry about what happened to you, and I can't be sure if this is caused by updated dll files because I haven't encountered your situation in various versions. But I always play D2 with Sven's glide wrapper for best graphics and experience, so you could try it.

Youtu.be
i play with glide mode.
In other mods the cursor works fine

problem solved, my bad
thanks for reply

If 'Set items.pdf' is correct, then why 'Mavina's True Sight Diadem' have +1 to Javelin and Spear Skills? I think this set focus on Bow Amazon by set item's weapon type. So it is useless until there is another javelin or spear set item

This modifier is still useful as a single item, when amazon wields a javelin or spear.

Why not add 8x10 inventory, with a 4x10 section dedicated for charms?
Have any changes been made to the chance of dropping runes, unique, set items?
Is farming balanced between classes?
On what /players setting I must playthrough, farm?

1.Mega inventory technically means compact item slots which will ruin the beauty of character inventory screen.
2.Much better drops of runes and gems.
3.Set and unique items have improved chance for gambling.
4.Except looting and gambling, you can get specific items via vendors and cube recipes. I don't want farming to be the core of Diablo.

An excellent mode for single player and playing with friends. One faces a significantly greater challenge that actually requires strategies and skills even with the best equipments. On the big plus side, grinding in this game becomes unnecessary: the stores and the new Horadric cube formulas make equipment-crafting pleasant, and you can get everything with them (for some extreme combination, patience is still needed). At the same time, items are largely balanced, allowing more interesting and strategical…