What exactly is Tsardoms Total War:

Tsardoms: Total War is a total modification for M2TW Kingdoms set in late middle ages, featuring a campaign centered on Italy, Balkans and Asia Minor. The reason we decided to make a mod like this is, firstly because we are familiar with the history of the region, and secondly (and most importantly) because this part of the world has pretty much been ignored by TW games and mods and we thought it would be fun to play and learn from it.

The modification will begin in the 4th semester (in September) of the year 1345AD and it will conclude in the year 1530. The reason we decided on this timeframe is because we wanted to make a mod about the fall of the Roman Empire and the subsequent struggle of the neigbouring factions for her legacy, so this timeframe fits perfectly.

The game will begin with the Roman Empire devided into two rival factions - the "House of Kantakouzenoi" and the "Imperial Regency of the Roman Empire" - which will struggle for the guardianship of the heir to the throne - John V Palaiologos. At the same time, the Regency is allied with the Bulgarian Empire and the Kingdom of Serbia, whοse King (and wannabe Emperor) - Stefan Uros IV Dusan - is besieging the city of Serrhai which, by capturing it, will allow him to be crowned "Tsar of Serbians and Greeks". On the opposing side, the Turkish beyliks of Asia Minor, namely the Ottomans and the Emir of Aydin, have taken the side of John Kantakouzenos and have already joined the fight for their own interests, harassing the eastern parts of the Empire.

In the North, the principallities of Wallachia and Moldova are trying to defend themselves against Hungary and Bulgaria and they are also looking to expand their teritorries after the withdrawal of the Tatars.

In the Meditteranean and the Aegean Sea the two maritime Republics - Genoa and Venice - are competing and attacking each other for the control of the profitable trade routes from the Middle East and the Black Sea.

In southern Italy, the Kingdoms of Sicily and Trinacria, after the incident of the "Sicilian Vespers", are attemting to enforce their authority on each other's lands. In Northern Italy, the Italian city-states are vying for power, the Swiss Confederacy, in the Alps, is fighting for Independence against Milan and the Habsburgs, who have the vision of a grand Empire...

This is certainly the time for Total War!!

Number of turns per year:

Is the faction list final?
Faction list is not set in stone, but we are very disinclined to change anything for now.

Are all factions getting equal attention?
Yes, of course. We are very proud of the fact that we are including some factions that have never been in a TW mod. We really want to give the community an opportunity to try them out.

The main cultures of the mod's factions will be:

The map of the mod will include the western part of Asia Minor, the Balkans, Italy, HRE up to Strassbourg, Bavaria and Vienna, Central Europe and Eastern europe up to Kiev: 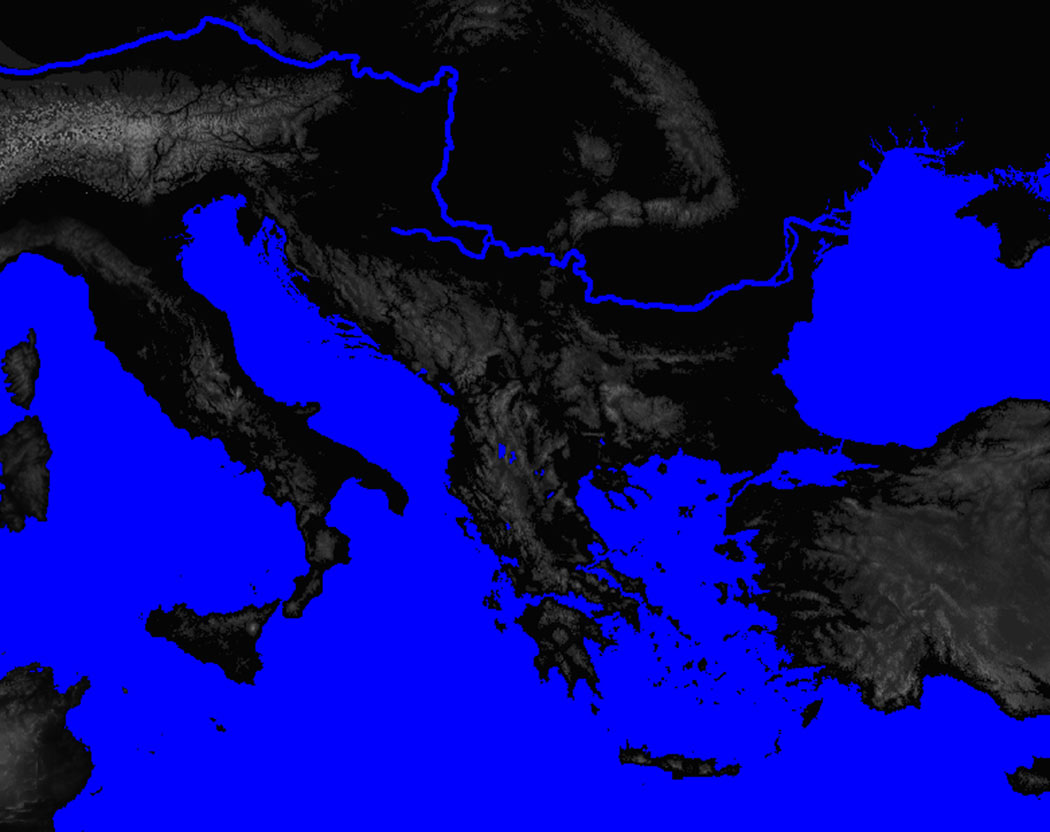 you can see also a preview of how the map will look like here.

All the older previews (from 2008) have been deleted, since they no longer represent correctly the general picture of the evolved game. Currently all the official previews are situated in the "Previews & Promotion" sector of our forum. Ckeck them out, if you want; they are very interesting. They are of several kinds:

The game is NOT released yet. For further information about the progess, check the equivalent "stickied" thread in the modification's sub-forum.

The Duchy of Austria: Crucifix of Venus

“Let other others wage war, but thou, O happy Austria, marry; for those kingdoms which Mars gives to others, Venus gives to thee”

Well, not quite. This is Total War, after all. Sounds cool, though. This is another AAR from our on-going internal testing. Hope you all enjoy! 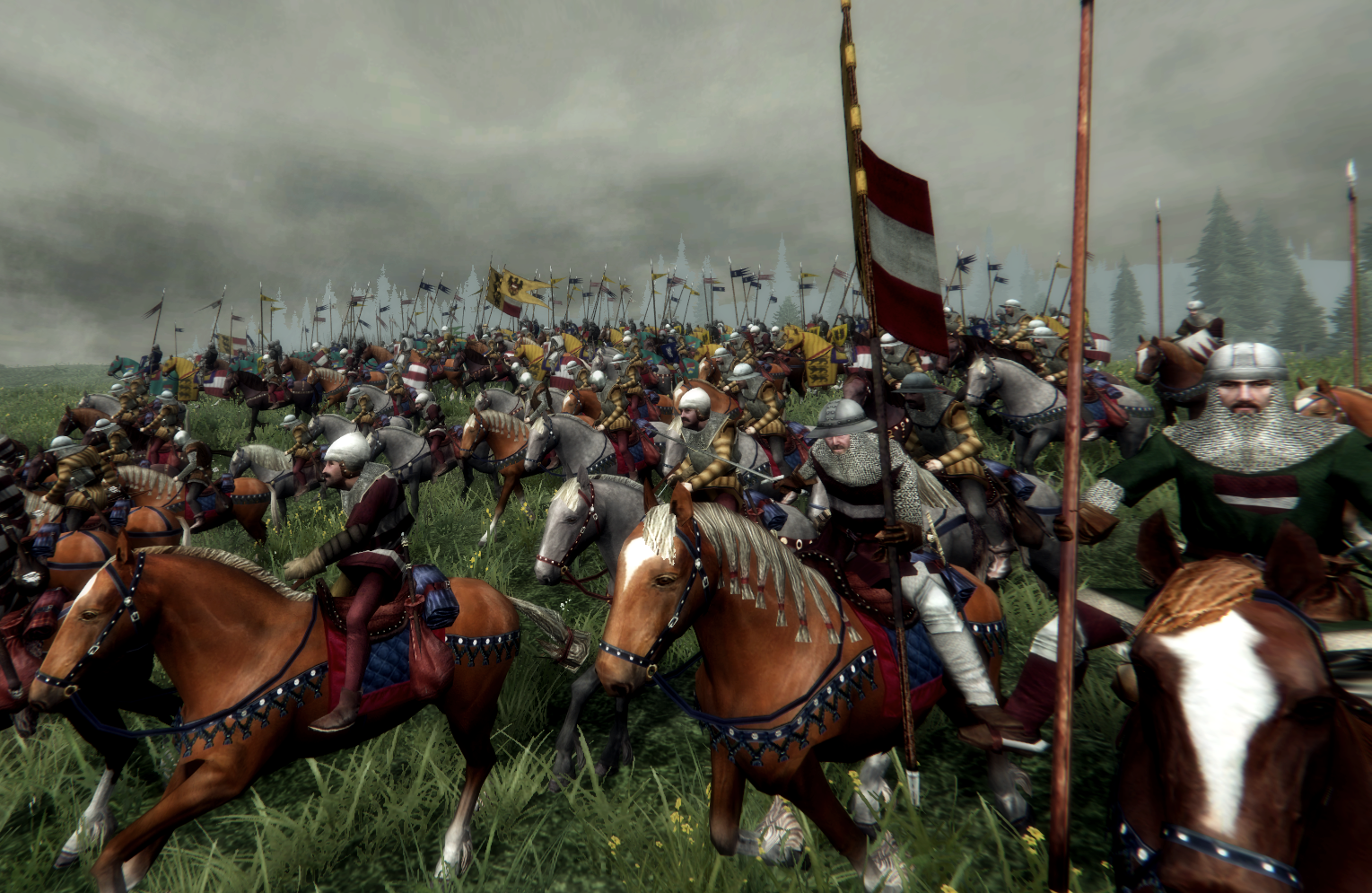 Secure from the metropolis of Wien, the duchy is in an advantageous position to further their influence and territory. I quickly made strategic alliances with Hungary and the Papal States. The alliance with the latter would prove a boon in my future conflicts with the other Catholic princes and polities. With command of Wien and the Habsburg hereditary lands, the duchy was ready to assert itself as a player beyond central Europe.

Our main conflict was with the Swiss. Right away they attacked our castle in Friedburg. Boasting superior forces, they rushed the castle after situating their siege engines, but they were driven off by the determined efforts of the garrison led by the Count of Friedburg. 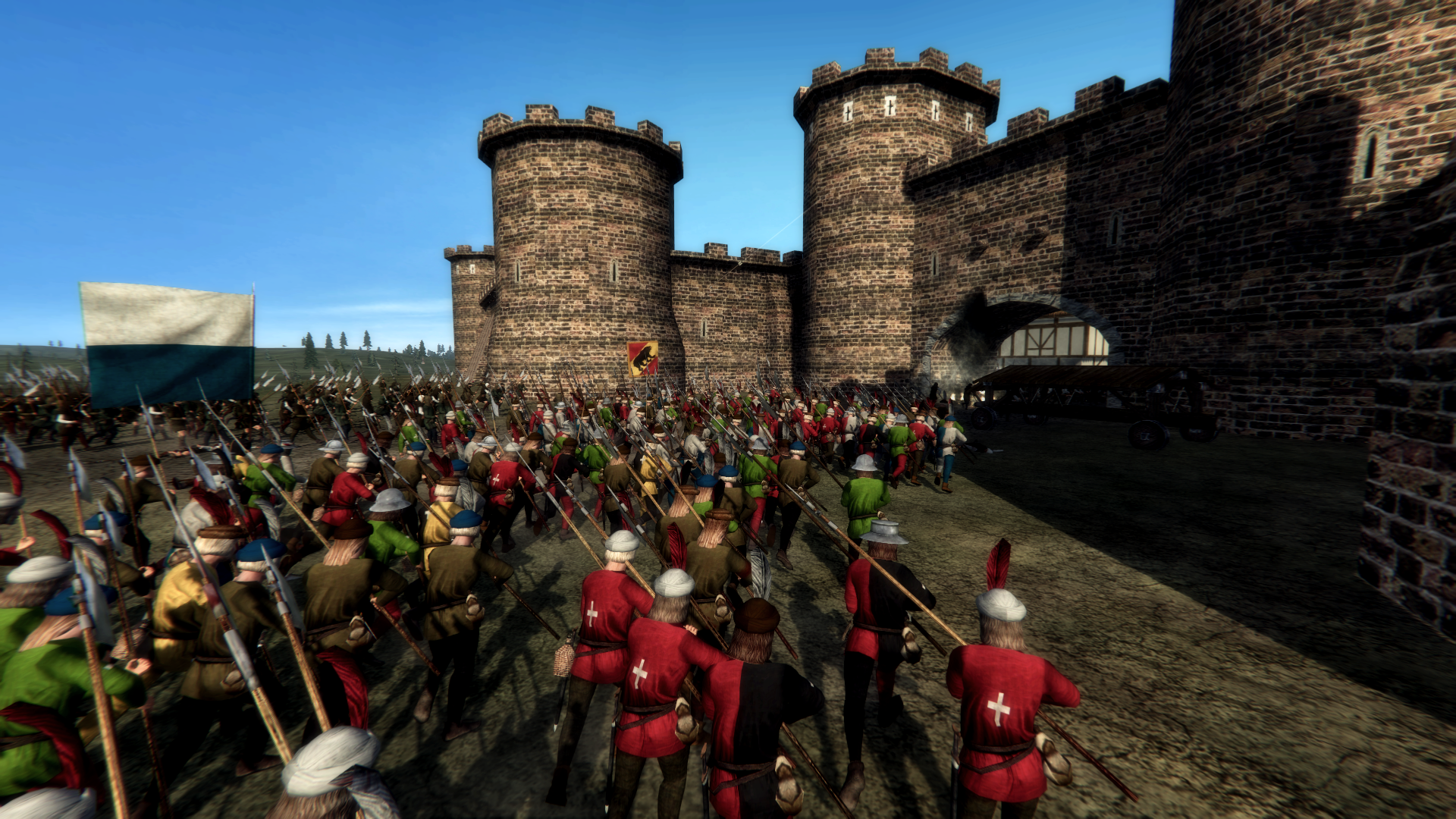 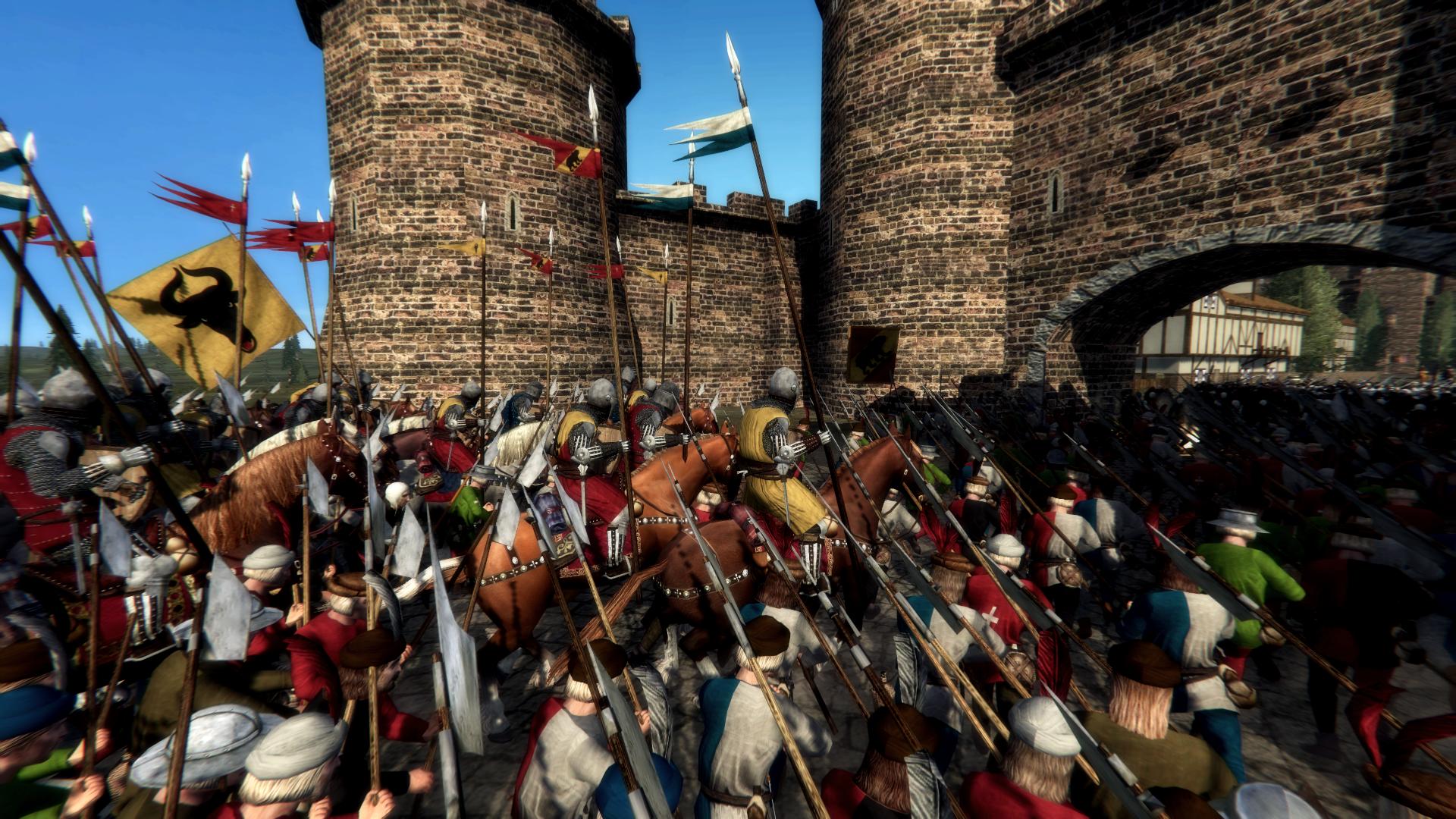 Although the victory was a large setback for the Swiss, it was only a matter of time before they regained enough strength to resume their open defiance and attack the duchy's most remote outpost again. Reaching the Swiss homeland would be stymied by the lands of the rival HRE duchies. The had to be brought to heel before we could definitively stop Swiss resistance. The aim was clear: they would all need to be brought into the fold by force.

True to the nature of the duchy, many loyalties and alliances were acquired through the deft of use of diplomacy, namely through marriage. The duchy's princesses helped affiliate this, and the fruit of their diplomatic labors helped secure our eastern borders. Marriage alliances with the Hungarians and Venetians made it so that we could focus our efforts on the rival HRE duchies and the Swiss. Through the use of well placed bribes and military actions, their cities fell. 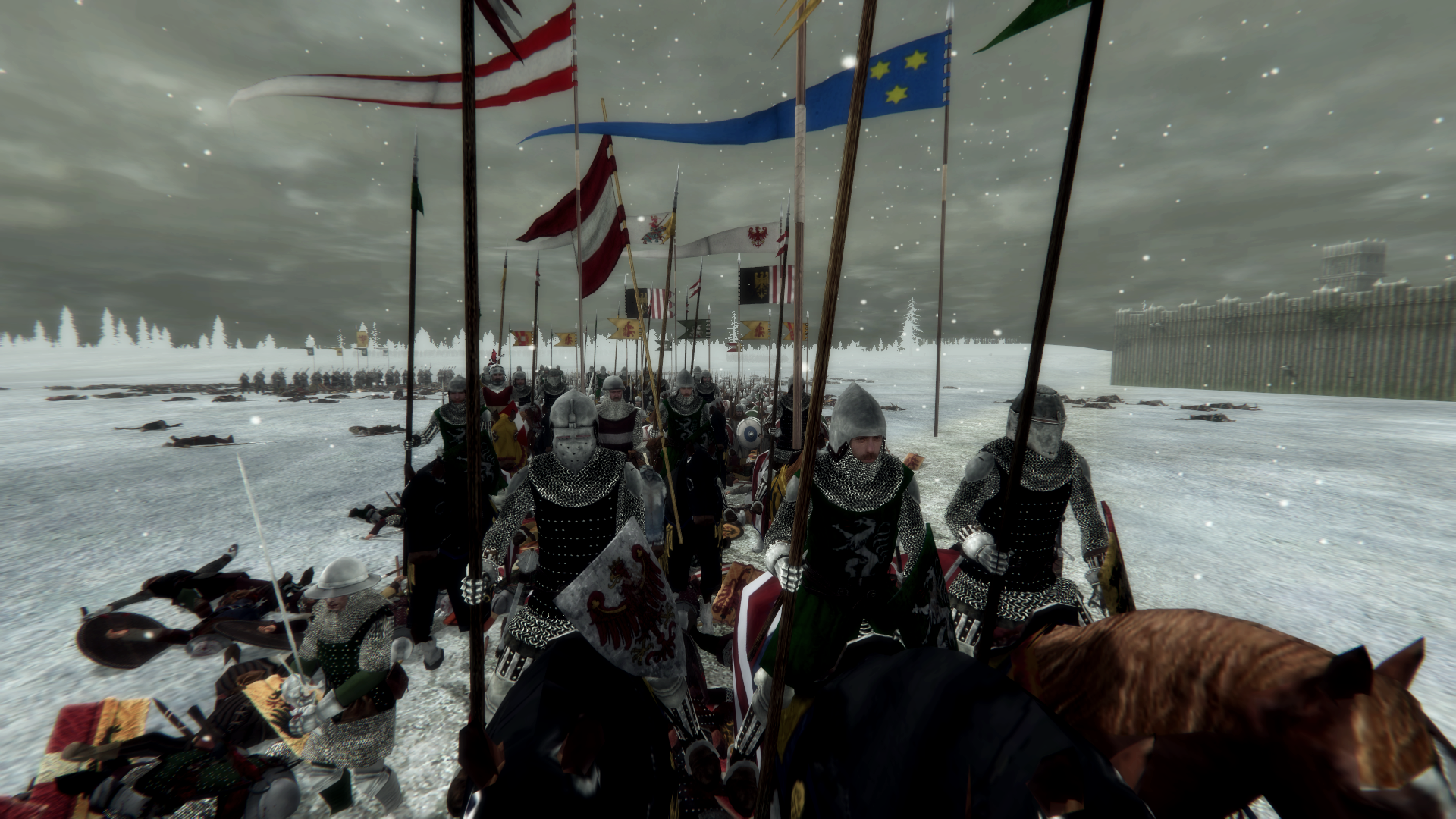 After bringing our rival duchies to heel, we pressed the attack on the Swiss. Their poor economy, improvised armies and defensive posture made them easy targets. The war came to a head quickly as the new duke took lead of his armies for the final battles of the conflict. 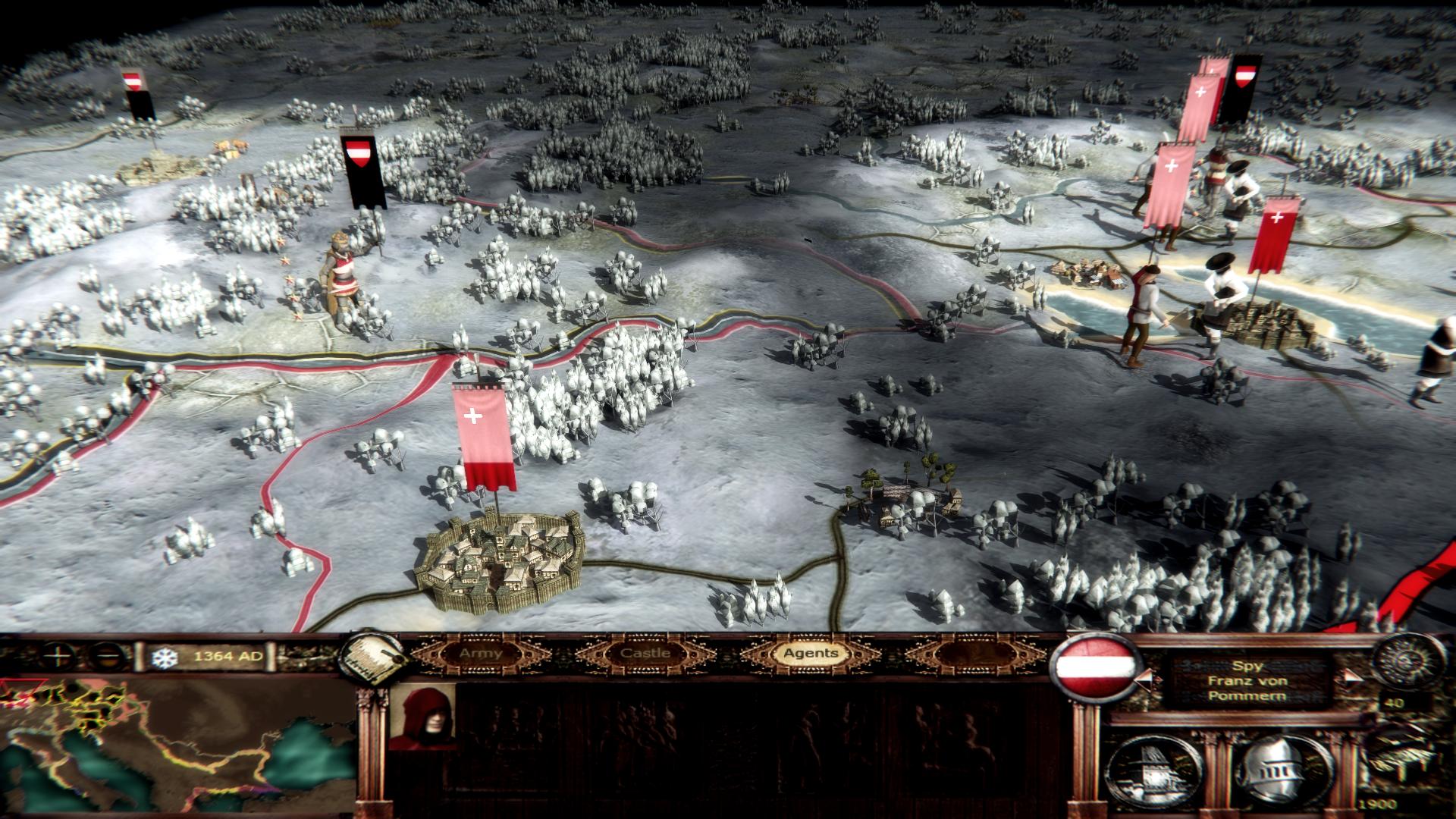 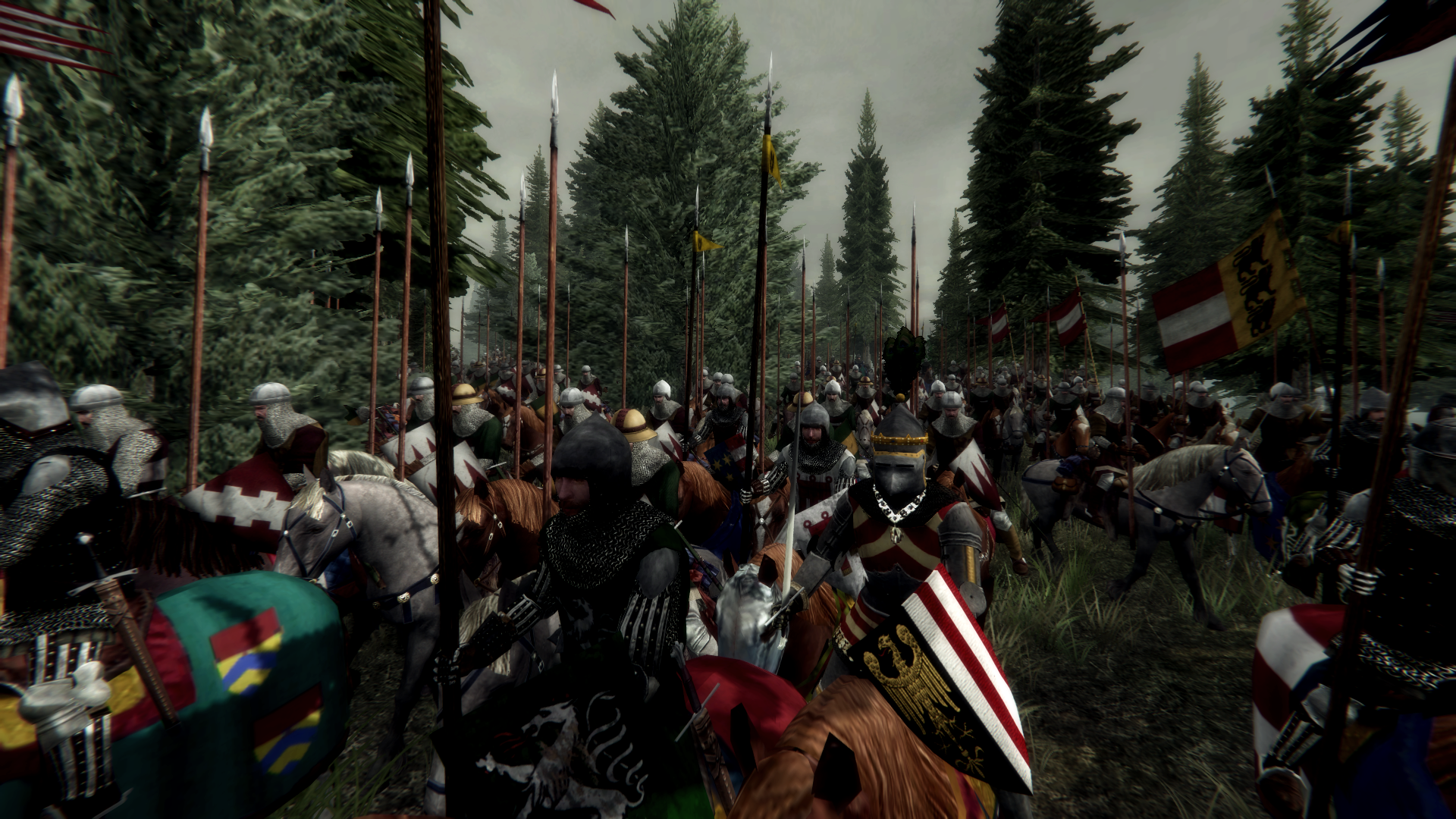 The knights of the duchy proved flexible. Adopting the fighting manner of the Swiss, they fought with the same valor as the phalanxes of old. 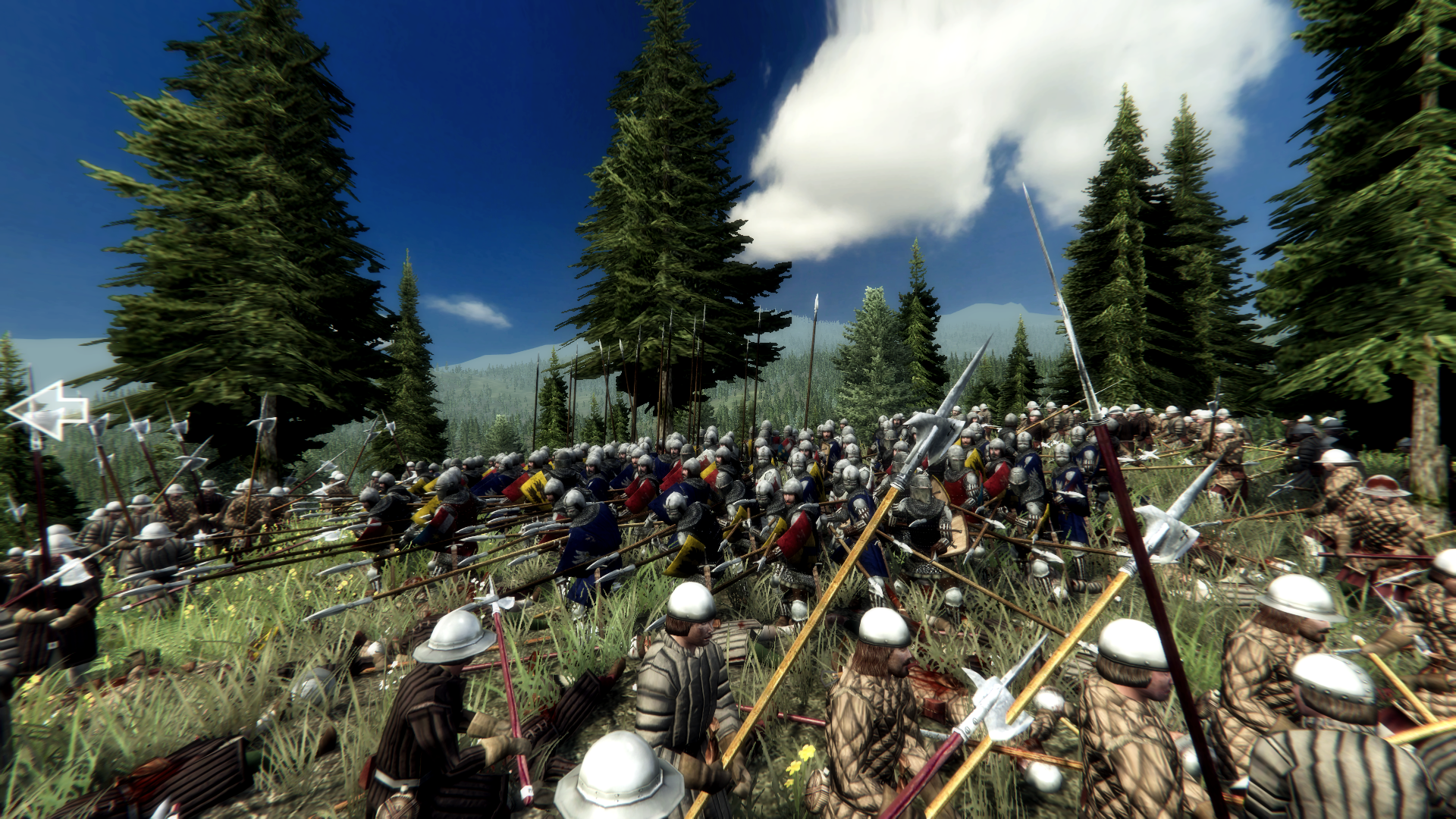 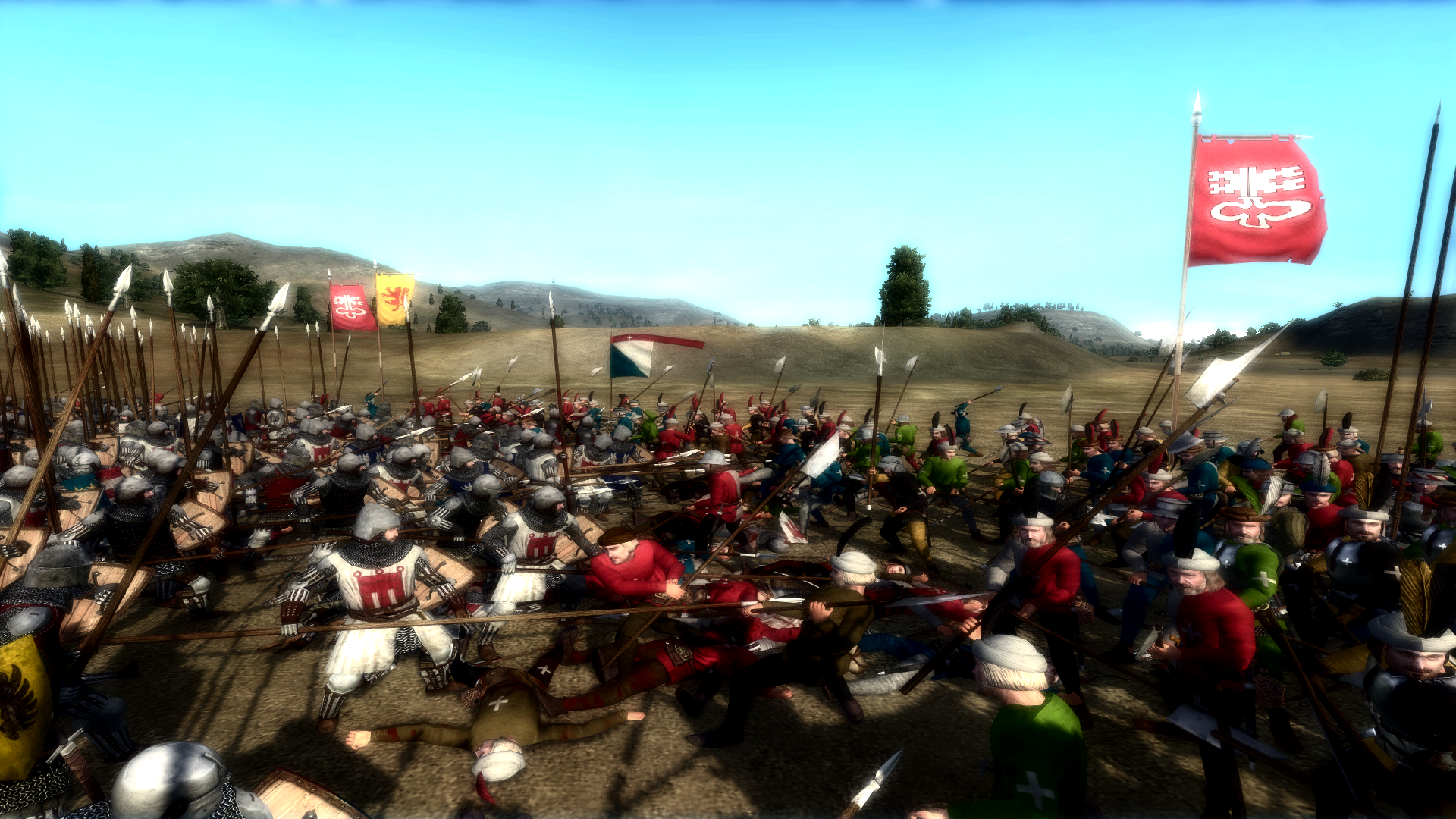 The annexation of the Swiss homeland expanded our sphere of influence, but also brought us into the periphery of another: the Duchy of Milan. The Milanese armies were formidable and their coffers deep. Their standing on the world stage was equal to our own. The inevitable conflict with them would be prove to be our greatest test. However, the advent of Churburg armor made our forces all the more formidable! With the Alps as our backdrop, there was no denying this storm of swords. 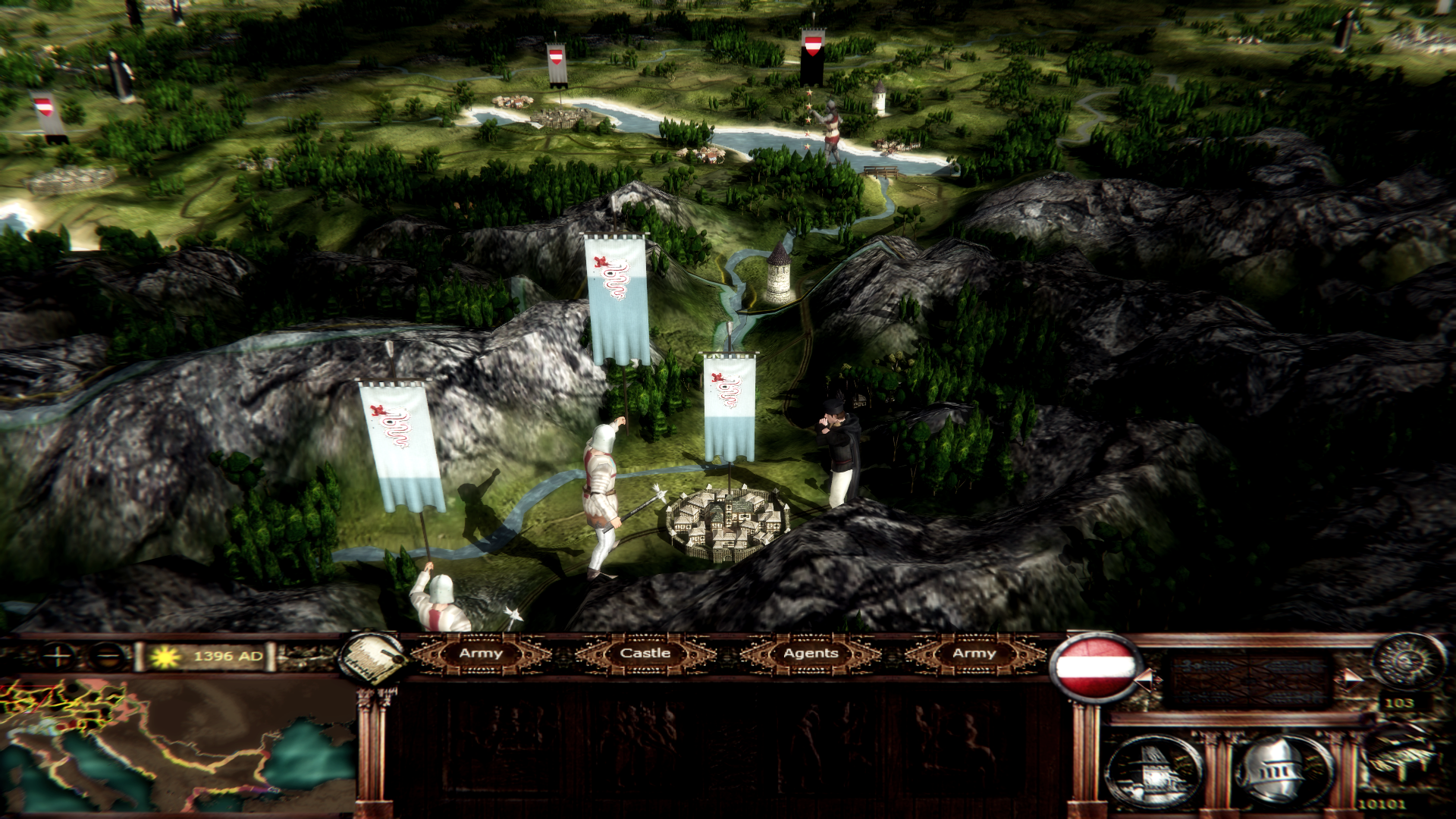 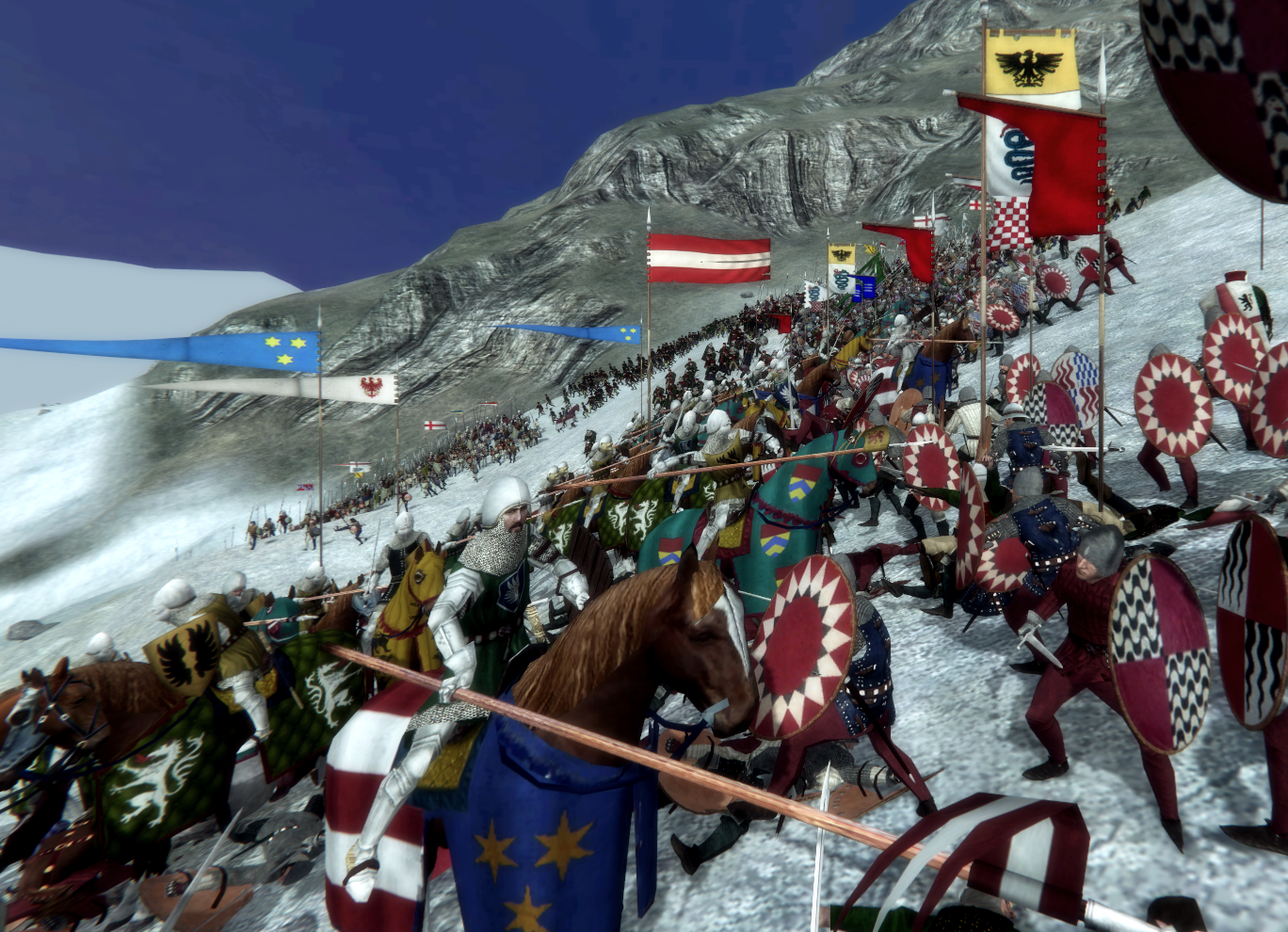 Luckily for the Milanese, the pope called for the hostilities to end soon after they had began. Risking excommunication, I took one last territory from Milan and triggered our victory. We only got a quiet admonishment from the holy father. 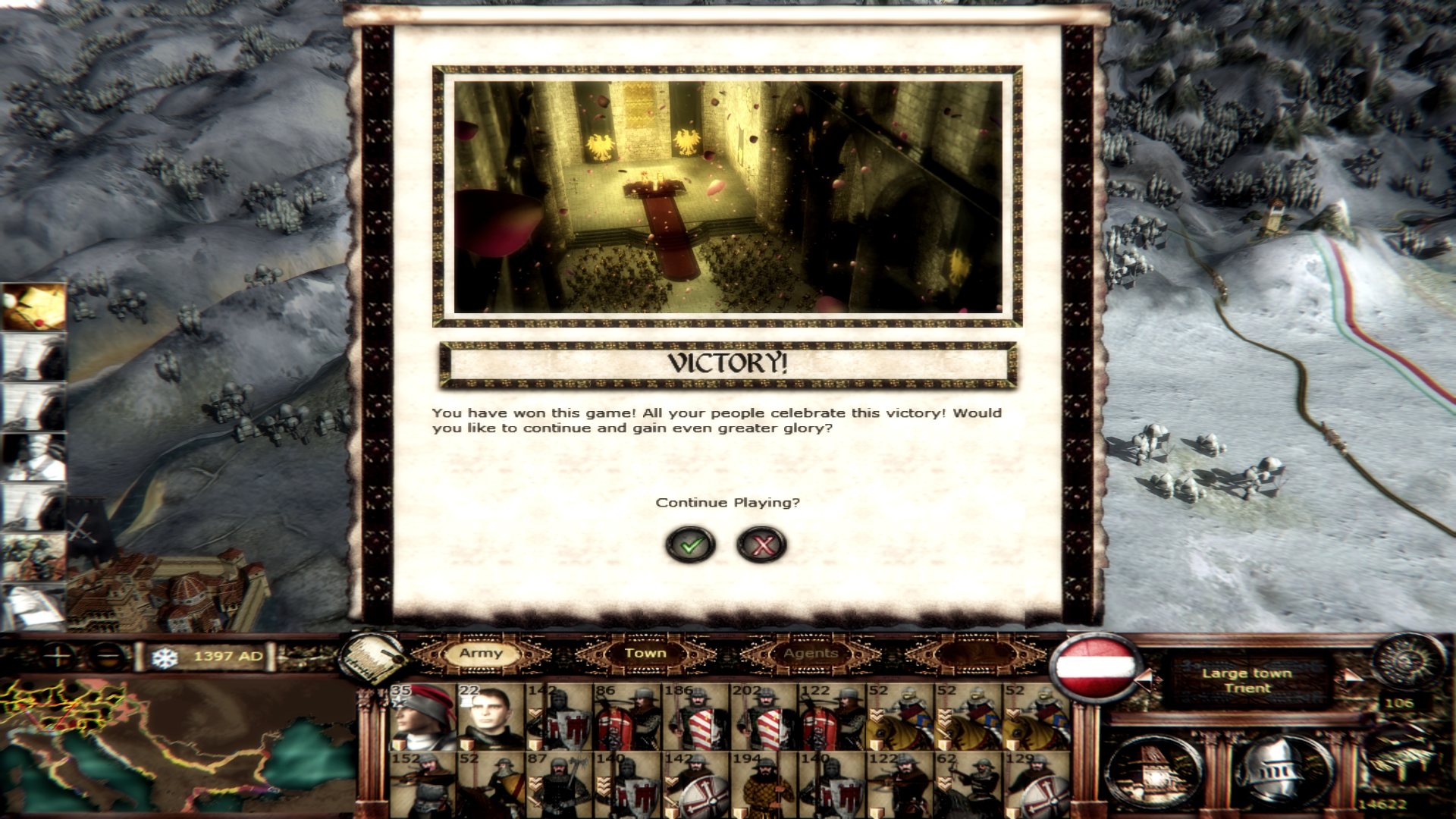 A short after action report as part of the closed Beta testing of Tsardoms Total War. The faction used is the Swiss Confederacy which is one of the smaller...

After 8 years of development the team of Tsardoms Total War is proudly presenting the Battle Beta. This is a battle only mod to give all the fans a taste...

Tsardoms proudly presents a comprehensive preview of the Republic of Venice, one of the many Italian factions in the mod.

Tsardoms presents a comprehensive preview of the Hospitaller Order of Saint John of Malta. The preview contains three types of units: members of the order...

I have been following this mod since 2014-2015. I remember asking the Facebook page also about its progress 3-4 years ago. Every single day I go to Twcenter to check for news or updates for the progress and as I can see the mod is almost ready. I can't say nothing less except that the modders have put an huge work and research for this mod and the result is and will be awesome. Big thank you for this! The only thing missing is the release date or release period even a prediction. Could you give us any info on that? We are hungry guyssssss!!! We need it!!

did the business go

cant wait for this mod to grow more, but about serbs, u missed one thing, serbs where also famous in greek lands as only other users of kataphractoii, either emperial guard or some elite early unit should be lancer cavarly that evolves into full blown kataphractoii, also, i am not sure about dates but i think albanians where already settling on serbian land with emperors permission, so some kind of light levy made out from albanians would be also nice to see.

I don't know what is a Chetnik unit?

And yes there are several Albanian units in the rosters.

Impossible to say due to real-life and work commitments. Whenever our modders get some spare time they do some modding work. But I can't predict when they have spare time and how much work they want to invest due to this being just a hobby. For example, one of our model makers disappeared 6 months ago and we haven't heard from him since.

I hope so too. But unfortunately I have no idea if it will or not. It's just a waiting game for people to come back and finish their work, we have not made any progress in the past 2 months, just waiting.

I hope the mod comes out before school