Human colonists! Tanks! Orbital Strikes! Vengeful lizard-men in hoverchariots! Primitive trogs! Sarien space-pirates! Destructonator robots (Impress your friends! Destructonate your enemies!) From the man who brought you Warhammer TW, Narnia TW, and A Game of Colleges TW, comes the first total science fiction conversion of classic PC game Rome: Total War. Set in a whimsical sci-fi setting drawing on a range of different popular parts of the genre, fight as the Lizardmen or Colonists and battle your way across the surface of Antares IV.

Thanks for voting and helping Total War: The Battle for Antares IV on it's quest to become the 2022 Mod of the Year. You are now in with a chance to score some free games from our #modlove collection. Help this mod secure more votes by embedding the widget (or link) we have included below on your favorite sites.

The Battle for Antares IV - the only totally sci-fi conversion for Rome Total War 1.5 - has been released. Brought to you by the man who created Warhammer TW, Narnia TW, and A Game of Colleges TW, The Battle for Antares IV breaks new ground (and indeed new space) for the RTW engine, producing an inimitable sci-fi experience with all the familiar gameplay of Total War.

Features include two playable factions, a wide range of enemies and rebels to fight including human Browncoats, primitive Trogs, and Sarien space-pirates. In a whimsical sci-fi world you must battle your way across the planetary surface either with forces of vengeful Lizardman warriors or valiant human Redshirts to gain domination. 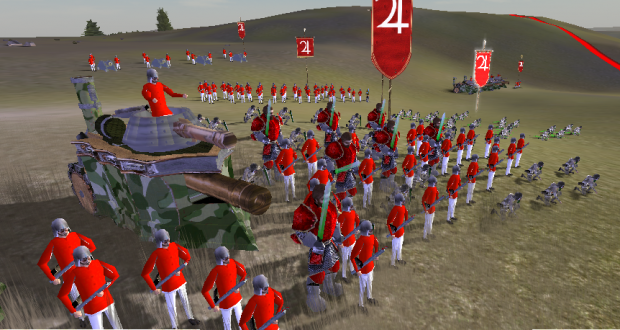 Features include huge monsters (the Lizardman Teravore), unique abilities (the orbital strike comms team), unusual vehicles (the hover-chariot), and new mercenaries (the Sariens and the Destructonator robots). Pushing the cutting edge of the RTW engine further than ever before, the Battle for Antares IV will be a fresh challenge for players new and old!

The Battle for Antares IV Release 1

The first release of the Battle for Antares IV mod. Download it, it'll be awesome. And has lots of features and stuff. And aliens! And robots! And trogs!

is this mod dead? it was quite fun to play even if it was tricky to set up

I'm not planning any future releases I'm afraid. Too many other projects going on nowadays and the player base is too small for interest.

does this need alexander expansion? i wish mod lists had an easier way to tell which expansions are needed

so any updates on the mod

Hey so can you just tell me real quick where to put the file? I read the readme and stuff but when I put it in the rome folder it launches normal rome total war

Have you made the new shortcut correctly?

so far this is cool i cant wait for later versions
\

HOW CAN I İNSTALL ROME TOTAL WAR MODS?

The install instructions are included in a readme file with this mod :)