Total War- The War of the Houses (Lotharingia)

Total War - The War of the Houses (Lotharingia) is a mod project for Medieval II: Total War that aims to change the player's view of the game compared to what has been done in other mods so far.I'm happy to announce that this mod is no longer a project and has become a reality! With the help of dadasauvage who takes care of the modding part, we hope to release a version 1.0 by the end of 2021! As you will have understood from the title of the mod, you will not play a kingdom or a people, as in most mods, but you will play a dynasty or a great noble family.

The campaign starts as in the base game, i.e. in the year 1080. But unlike the base game, the game does not take place in the same geographical area. As head of the family, you will have to make your family more powerful than the other families, in particular by taking over the various lordships on the map, which act as regions. By building alliances and expanding your holdings, your family will have to compete with other houses to become the most powerful.

II.Content already made for the mod :

III. The factions present in the mod (in brackets the faction it represents as a feudal state) :

IV. Cultures of the factions present on the mod :

V. Content that is in progress or still being planned : 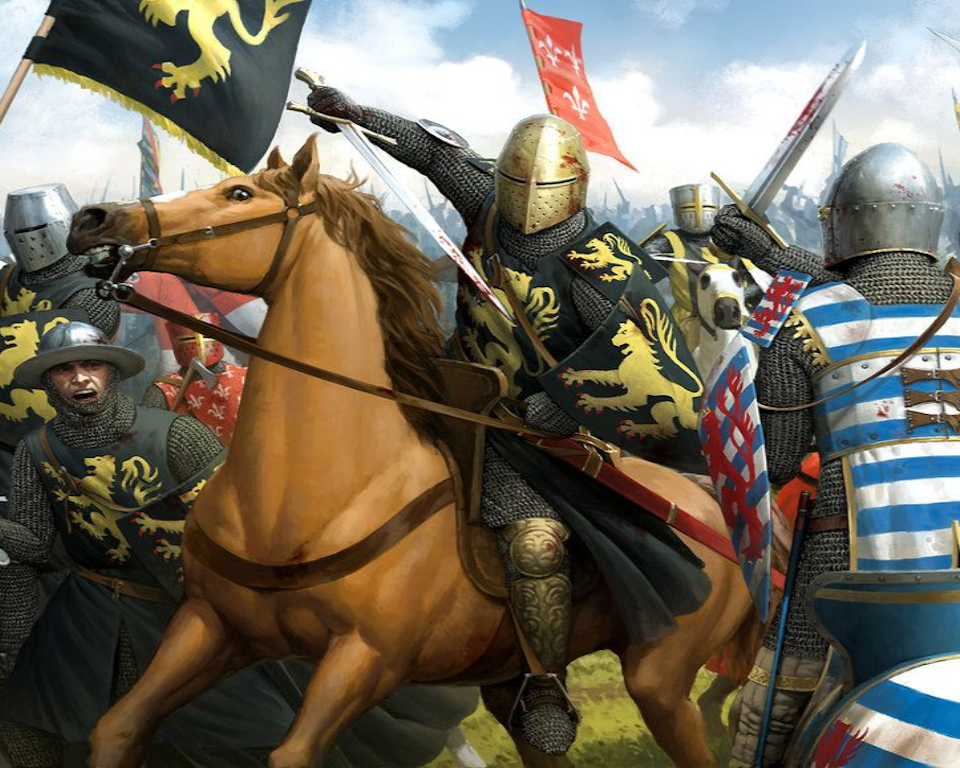 (Questions in the form of an interview. Answer provided by Andrew1830.) 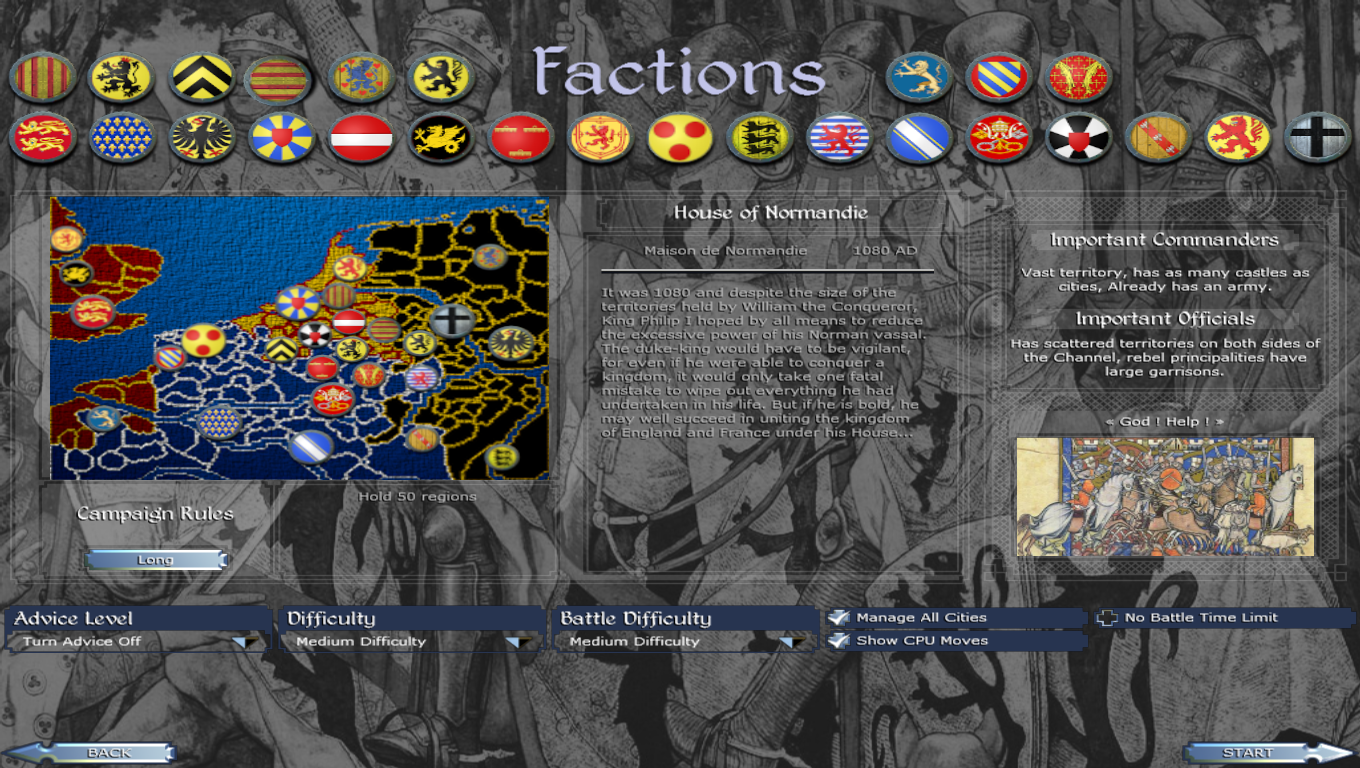 General presentation of the mod 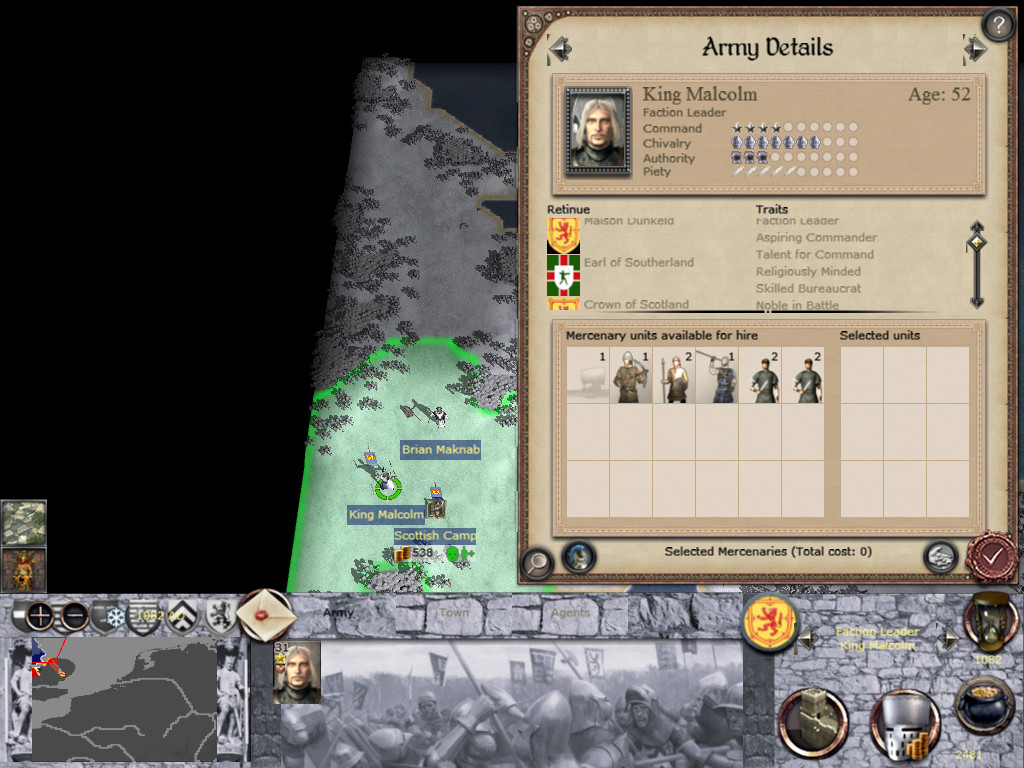 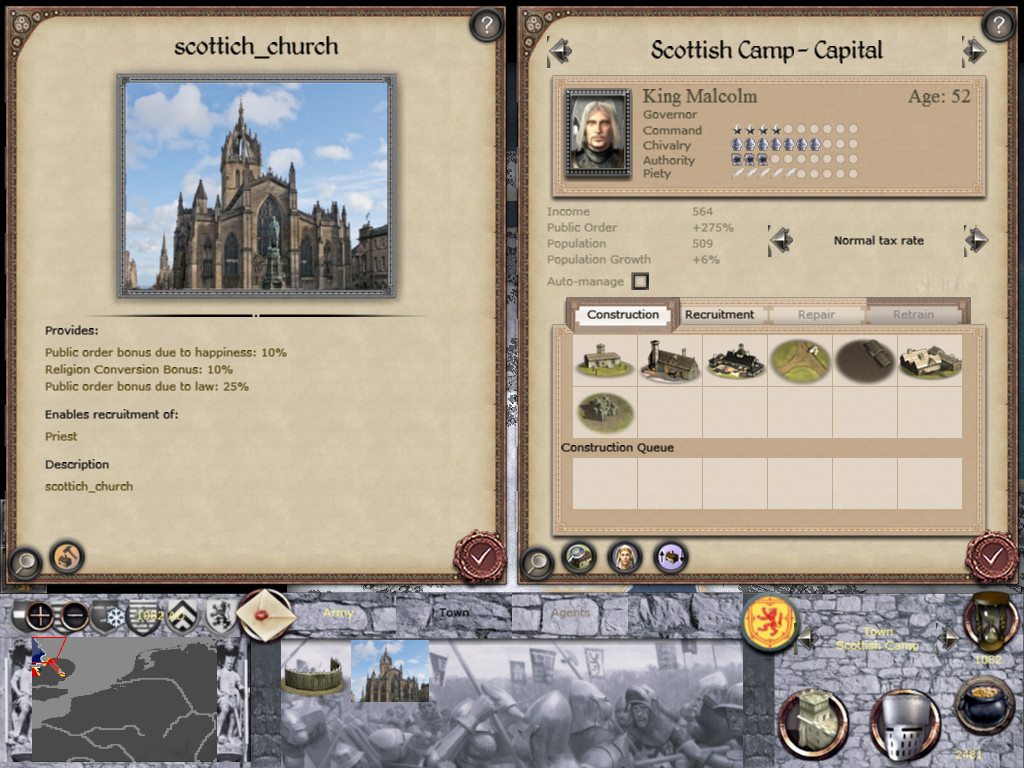 Questions about the next version (Alpha 1.2) 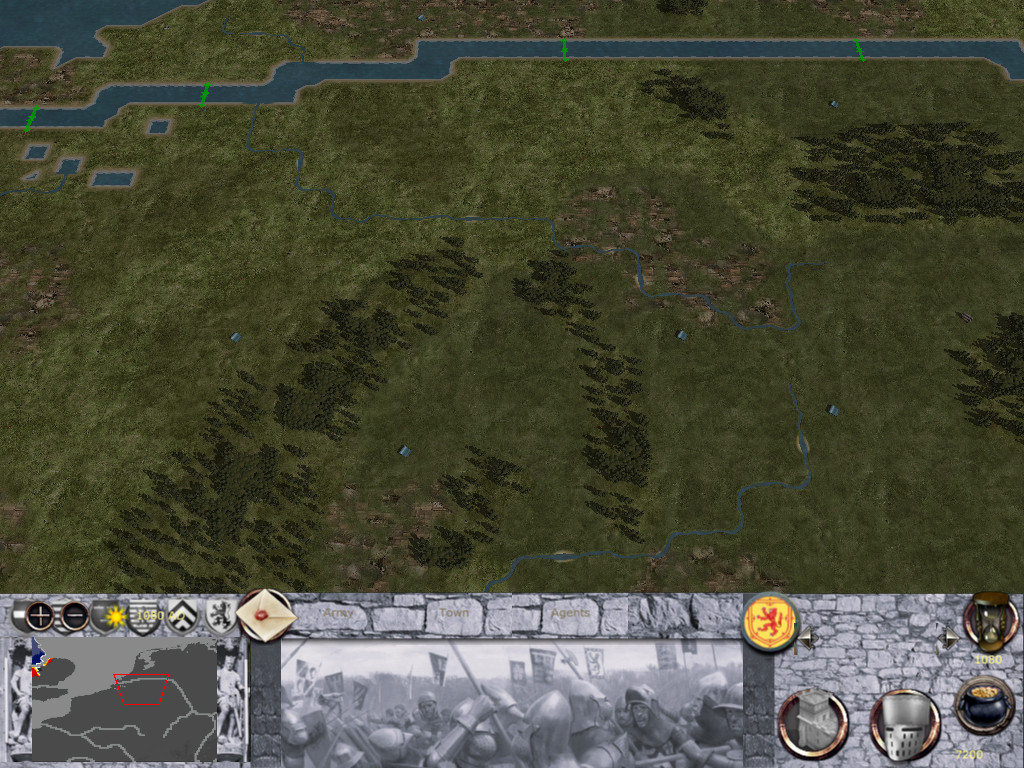 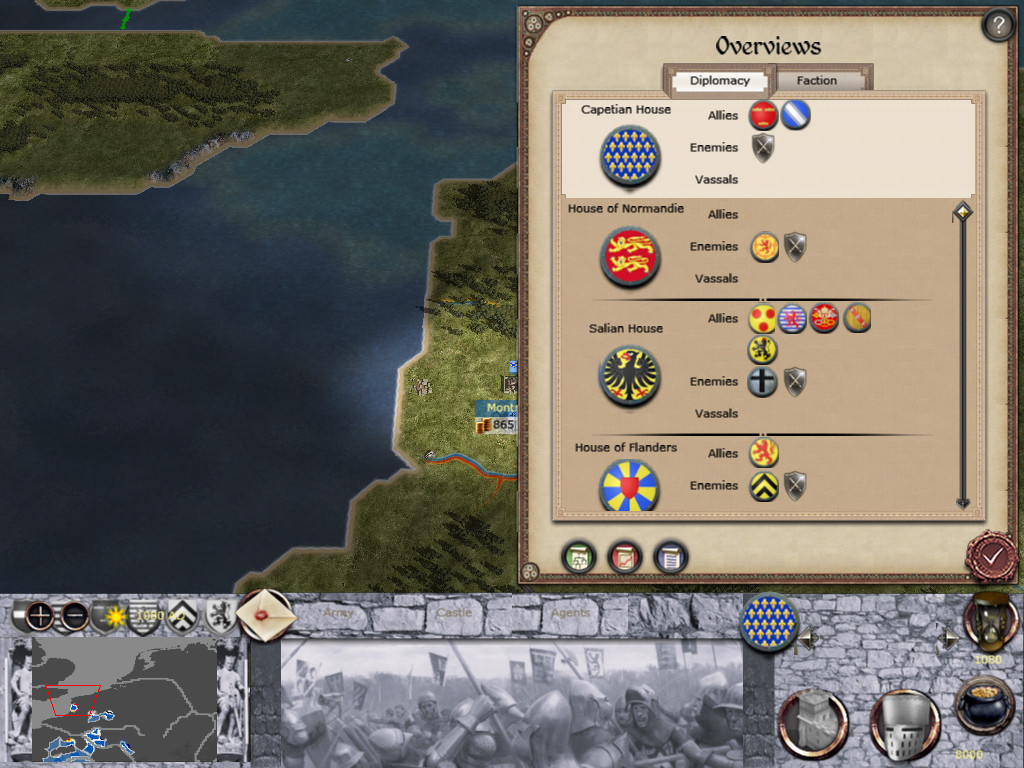 Other subjects for future releases

Presentation of the faction: House of Leuven

In this article, you will find a presentation of the faction "House of Leuven". But also the history around the family, the composition of the family...

Presentation of the faction: House of Flanders

In this article, you will find a presentation of the faction "House of Flanders". But also the history around the family, the composition of the family...

Presentation of the faction: Salian House

In this article you will find a presentation of the "Salian House" faction. But also the history around the family, the composition of the family present...

Presentation of the faction: Capetian House

In this article you will find a presentation of the "Capetian House" faction. But also the history around the family, the composition of the family present...

New version with corrected error and some additions for the family, the name and the portrait of the factions. There is a possibility that the mod crashes...

[ALPHA] Total War - The War of the Houses (Lotharingia) (Outdated)

Total War - The War of the Houses (Lotharingia) is a mod that aims to change the player's view of the game compared to what has been done in other mods...

Second version of our beta on the game. Don't hesitate to read the article that was published on it and that includes all the information related to this...

Here is beta of the mod. We hope you will give us feedback on the mod page via the comments area.

Here is beta of the mod. We hope you will give us feedback on the mod page via the comments area.

Great mod so far! Will Normandy be a new faction in the mod in the next release? Will there be more factions and more new units? Wonderful article!

Hi, sorry for the delay in my reply. So, as you can see on the mod page, we currently have this as a faction (but 3-4 factions may be added in the next version of the mod):

We will be rearranging the units and redesigning them to fit the identity of the mod, although in the end you will recognise them as being from Medieval II Total War.

Thank you! Glad you like the mod! Normandy is already present in the mod. As you can see, there are already many factions (23 factions if I remember correctly). I think that as it stands, we won't add more factions unless we deem it necessary to better balance the forces between the factions.

As far as units are concerned, we agreed to keep rosters of (vanilla) units, so not units like in the "Das Heilige Römische Reich" mod. Moreover, on the current version of the mod, these are units that come exclusively from the vanilla but in the next version, we intend to add other units from various mods to bring specificities to certain factions and we intend to make AOR type troops that can only be recruited in one or more colonies (these will be troops of knights on horseback and knights on foot such as Flemish knights, Norman knights, etc).

Apart from that, once again, the next version will have a brand new map that will normally be 2x bigger and will have the maximum number of colonies available (199 regions)! I hope I've made you want to play the mod and that I've answered your questions 😉

Thanks for the news!

I'm also making something on rome remastered (as a submod campaign) on different duchys during the hundred years war and After with louis XI against the Duc of Burgundy. So i'm interested in your mod too, but if i can suggest something maybe you'll have to add units like late pikemen with Salads helmets, add units like halberd for all factions, add different kind of Bow/Crossbow units, with late and mid-late era , in the hundred years war the main unit is not sergeants actually , its more Heavy Billmen/vougiers/Pikemen/heavy chivalric knights and some mercenary Swiss, mercenary troops from all the country. and Like little padded armor for low class unit and "Garde des villes".
So maybe i can help you if you want you can contact me on discord or something!

SOme units are buggy and dont have textures too,
and then i'll suggest to add late era portraits for Generals. if you know the mod 'Les Pays de France" there is a good example of the High era Style for Generals and Civilians.

Then Maybe we can expect more buildings?

Good luck for the project

Can't wait for the new release and congrats on your release!!

Love your work and i hope your work gets an award!! Will you add more european units?

Hi TimotheeMi , thanks for all the compliments and sorry for the late reply. We are now reworking ALL the mod: new map twice as big and many other additions that we hope you will like. Then, thank you for your remarks on units brought to the mod and I see that you know about this topic. So, would you be interested in joining our team to take care of the mod units ?

What role will I have in your mod? The only thing I can do is making new settlements. I know nothing of scripting and don't know how to make new units. That is out of my league! I hope to see more of your stuff about this mod. Looks really well done!!

Single Player
Tags
Embed Buttons
Link to Total War- The War of the Houses (Lotharingia) by selecting a button and using the embed code provided more...