The TIE Fighter Total Conversion (TFTC) project ports the original classic 1994 LucasArts game TIE Fighter, into the 1999 X-Wing Alliance (XWA) engine. Based on the original TFTC from 2005 and built upon the X-Wing Alliance Upgrade (XWAU) project, this is a complete overhaul of the game from graphics to gameplay. All 13 battle campaigns and their training missions have been ported over along with 8 Reimagined battle campaigns, taking advantage of the much better XWA engine and imagining how TIE Fighter could've been had the technology of the time not limited it. But here's a general breakdown of what you can expect from this mod!

Make sure to watch the Installation Tutorial video for full details and step by step instructions on installing TFTC.

I'm pleased to announce the release of the v1.3.2 patch for TFTC! Its a relatively small patch, but fixes a few critical issues with v1.3 along with a few other fixes, balance updates and new concourse animations. Changelog can be found in patch-notes section on our Discord or on our website. The installation tutorial has also been updated to account for the patch.

But while I'm here I thought I'd share with you a couple of other things we've been working on. Whilst work on the Reimagined campaigns continues, TFTC team member Ual002 has been working on designing a brand new Concourse for a future patch that will also include redesigns of other rooms and even new shiny medals to replace the original ones! But what makes the Concourse room special is we can now place animations that will play and loop on specific missions. This basically means the Concourse will change what is playing and what is displayed outside the window from mission to mission. Perhaps you're at a planet in one mission and in hyperspace the next. Capture some Rebel prisoners last mission? You'll see them walking by. Maybe even a personal appearance by Thrawn himself! Take a look at the video below for more details.

I also recently posted a concept video for remaking the TIE Fighter cutscenes for Reimagined (not counting the Intro cutscene being remade by the infamous Otaking) using the ingame engine to render. This concept video is from Battle 3's ending. On the plus side it allows us to tailor cutscenes to fit the narrative of Reimagined and give us greater flexibility in the retelling of the TIE Fighter story within Reimagined framework. The downside at the moment is the loss of any character cutscenes until we find a suitable solution. But we appreciate your feedback on this subject and any suggestions going forward. Check out the video below. 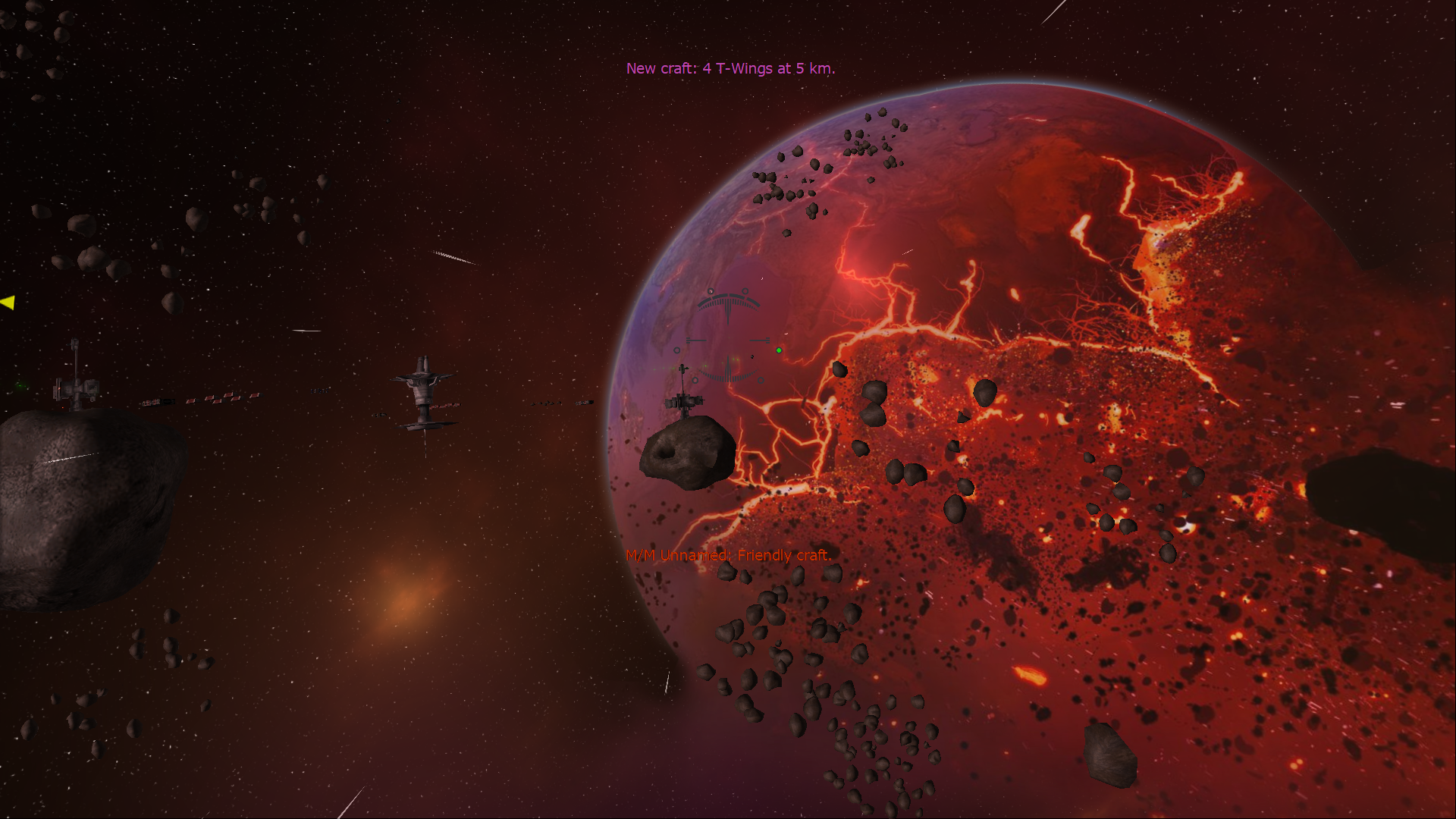 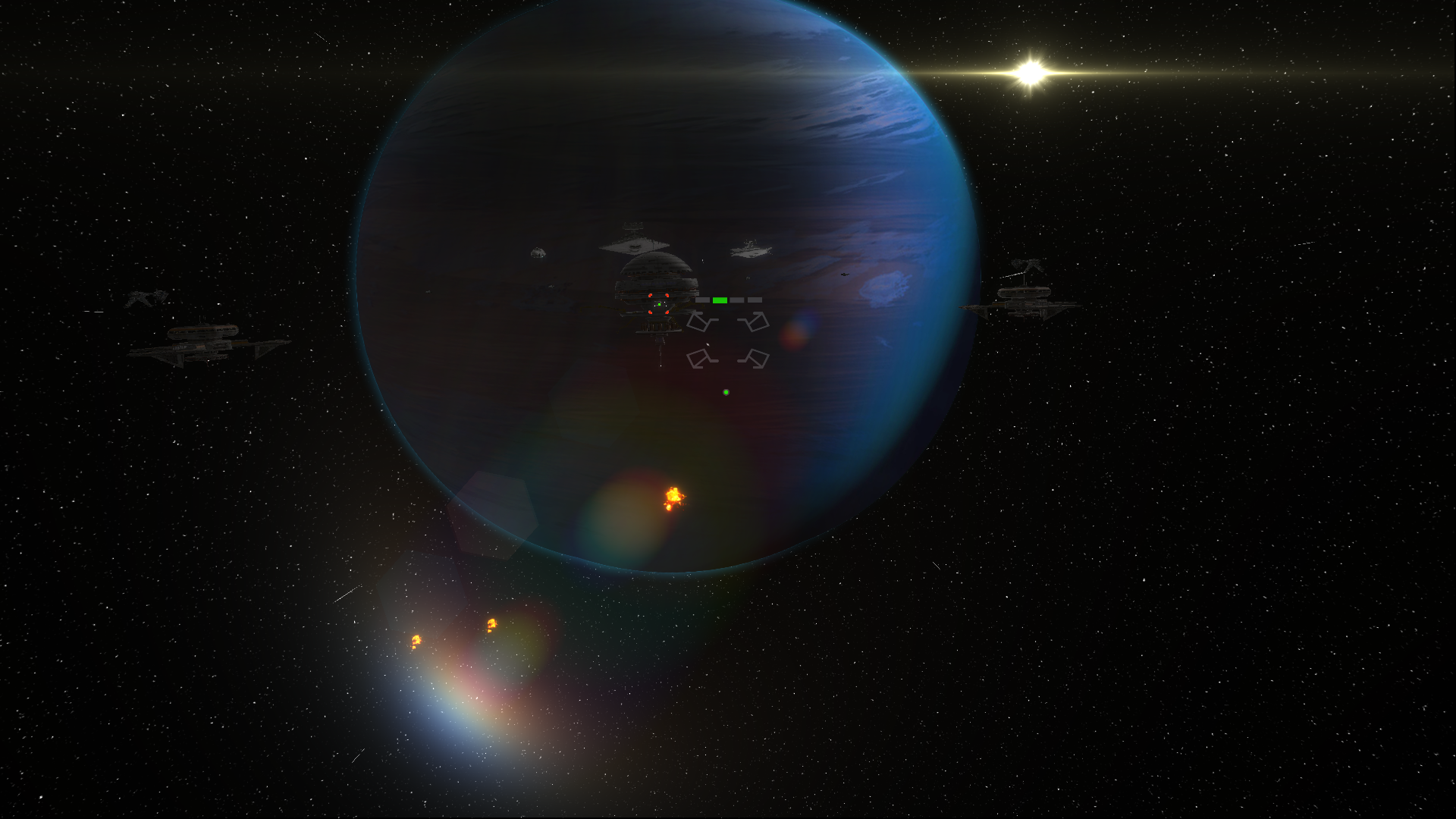 TFTC version 1.3 has finally been released! This version sees the all important GPU Ddraw update applied so in-game performance is now massively increased...

Today I'll be talking extensively about the upcoming Reimagined campaigns 9 to 13 which are still missing from TFTC. They will differ significantly more...

The wizards in the XWAU community have finally figured out how to do hardware rendering on an engine that does software rendering. This means huge performance...

Hello everyone, I'm pleased to announce the long awaited v1.2 patch for TFTC has finally been released! This patch is a huge update which sees a lot of...

TFTC version 1.3 has finally been released! This version sees the all important GPU Ddraw update applied so in-game performance is now massively increased...

The v1.3.2 patch fixes more critical issues that were found in 1.3.1 which severely impacted the Reimagined campaign in a negative way. This patch includes...

OBSOLETE VERSION: You do NOT need to install this patch separately, you can simply skip to the 1.3.2 patch The v1.3.1 patch fixes a few critical issues...

This is the complete version of the TIE Fighter: Total Conversion Remastered soundtrack. It has been reorchestrated from the original MIDI files by James...

This version has been superseded by v1.3! The long awaited 1.2 patch has finally arrived. Along with several visual improvements to explosions, debris...

This is the first patch for TFTC bringing it to version 1.1 Please make sure you follow the instructions provided. A full list of changelog notes are...

I'm having trouble with aspect ratios. The installation readme says to enable the default aspect ratio (4:3) when installing the prerequisite UXWA mod so I did that. However now I cant get the TFTC mod to work in anything other than 4:3. I went into the Babu Frik configurator and changed it to 16:9 but that did nothing. It only goes full screen if I enable "stretch menus and cutscenes to fit" but rather than making the game true 16:9, it just stretches the 4:3 aspect ratio to fit the screen which makes everything appear squished.

Should I uninstall and do a full reinstall (but this time install UXWA with 16:9 rather than default) or is there another fix for this?

Hello. Please bear in mind that the Concourse screens are locked at 640x480 resolution. We have made progress in breaking this hard limit but its still in testing and would require rebuilding of all the screens. All the original cutscenes are also rendered out at 4:3 since it only stretches them otherwise.

Inflight however, it will use your native desktop resolution and aspect ration, even to ultra widescreen levels.

So I was wondering if I uninstalled and did a fresh install, if I change the resolution in UXWA on that step of the install process, do you think that may solve my problem?

Hmm I'm not sure then. The easier thing to do in this case is to join our Discord and post screenshots/video of the problem because its the first time I've honestly heard of the aspect ratio staying at 4:3 inflight. You can certainly try uninstalling and retrying, just test/play XWAU first before installing TFTC to see if the issue is present in XWAU or if its TFTC specific.

Ill go the discord route first, if I dont have to reinstall again, that'd be grand

I just found out TFTC exists!
Oh my god. I loved that game.
I use an old 2009 iMac, and have been playing X-wing Alliance the last few weeks on it, through WineSkin.
Now, I am not savvy enough to figure it out myself, but is there any way to install this on my old iMac?

Hello Praesten. Unfortunately the XWAU/TFTC projects significantly upgrade the engine to the point that such an old system will probably not work with with the graphical upgrades that have been made and we all work with Windows rather than other OS. Currently we strongly recommend Windows 10 or higher. The mod CAN work on Lutris for Linux but only by using the old ddraw that was available pre 1.3 and it can also work on Windows 7/8 but at greater risk of significant issues.

You can of course give it a try, you can turn off all the special effects or use a different ddraw (search for JeremyaFRs Golden ddraw) which doesn't contain any of the graphical upgrades, but I cannot guarantee everything will work or be stable as expected.

Thanks AngelTFTC.
Well, it seems I have to save up for a Windows computer. Would a laptop be able to do the job? Which specs should I aim for?
If this is too much to ask, I understand.

The game is still fairly dependent on CPU despite offloading a lot of work onto the GPU and only one core is utilized so really anything i5 or higher minimum would be recommended.

Doest this include:
"TIE Fighter: Defender of the Empire"
and the 2nd expansion pack?

Simply stunning, so much love and effort has gone into this from the voice acting and briefings to the additional 20 ships, Tie Fighter Classic AND a reimagined version, pretty flawless and polished. All the 90's charm with a modern looking game engine 11/10. GET THIS MOD IF YOU LOVE TIE FIGHTER! Also big shout out to www.xwaupgrade.com!!

Wings of the Federation Freelancer