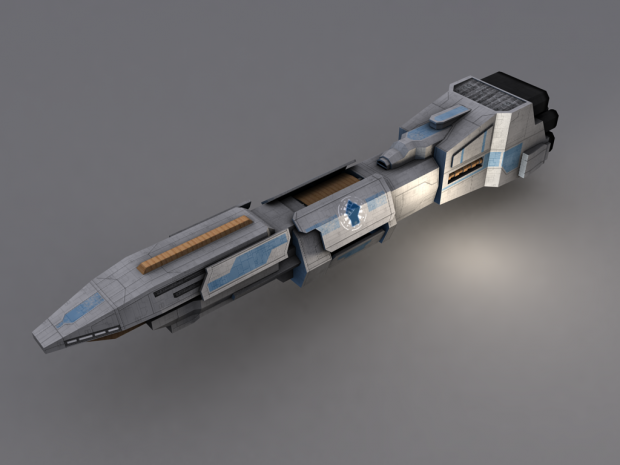 Now this is seriously one of my favorite designs up until now. Amazing work, it almost looks like the good old Dreadnaught-class mixed with Carrack-class elements. And this is why this superb ship stands out. I'm impressed!

Looks like dreadnought, but it is not a simple dreadnought. It is SuperMegaChissiDreadnoughter mk. over9999 , and i like it <3

What's the size of that beaut? And what does it match up to?

It's about 750 meters. The role it fills is comparable to the Dreadnaught or Bothan Assault Cruiser, something the Empire of the Hand's been lacking. It's better at the role than the Dreadnaught is (being moderately larger, newer and designed as a sort of upgrade to the dreadnaught), however it's likely to be outperformed in a 1 on 1 fight by the BAC. This basically fills the role gap they had between the Kariek, Nuruodo and Chaf.

I thought the BAC was comparable to the Victorys? And thus the Chaf

For damage ratios and fighter capacities, the BAC is closer to the Dreadnaught. The VSDII and Chaf are more versatile. As for damage, the VSDII and Chaf are both at 165 damage per second. Bothan Assault Cruiser is 136. Katana is 138. With these however, once the shields are down on their target it's 111 and 88 respectively because of Ion Cannons. The Dreadnaught is a constant 88 since it has no Ions, and the Bu'direch is 100 DPS.

So basically, VSDII and Chaf are much stronger and have more fighters to rely on. The BAC, Dreadnaught and Bu'direch are 300-500 meters smaller, and do proportionally less damage and have fewer fighters. although they tend to have higher health per meter. The reason the BAC becomes superior or at least more comparable to the VSDII is because it's also like 40 years newer. In terms of "modern" ships, it's still in the same relative power class as the Dreadnaught would have been compared to the VSD, etc.

Will you be adding starfighters to the VSDII and Chaf in the new version? I have the 2.0 version, and there is a reverse difference in the number of starfighters between the VSDII/Chaf and BAC. The BAC has approx 4-6 squadrons, whereas the VSDII/Chaf has only two squadrons (unless you are playing as the PA, which has more starfighter squadrons per capital ship).

will it have fighter/bomber deployment capacity?

The Skin and Model are heaps good and I like the Empire of The Hand Symbol on the side of the ship nice work guys.

So not only does it fit snugly into the Hand's arsenal, it's a gorgeous ship to boot. Well done, Corey!

This is the most beautiful ship I have ever seen.

How beautiful is that.
I can't wait to take controll one of them.

Secretly designed by Chiss engineers loyal to Thrawn, the Bu’direch was originally a test-bed for Imperial technology relayed back to the Ascendancy during his service with the Empire. Although based on the form-factor of a starship Thrawn first encountered over 25 years before, the Bu’direch was designed from the ground up to eliminate the well documented deficiencies with the original product. When Thrawn returned to the Unknown Regions the plans were handed over to his new Sycan allies who refined and finalised them before starting production.

Design and model by Slevered
Skin by Corey