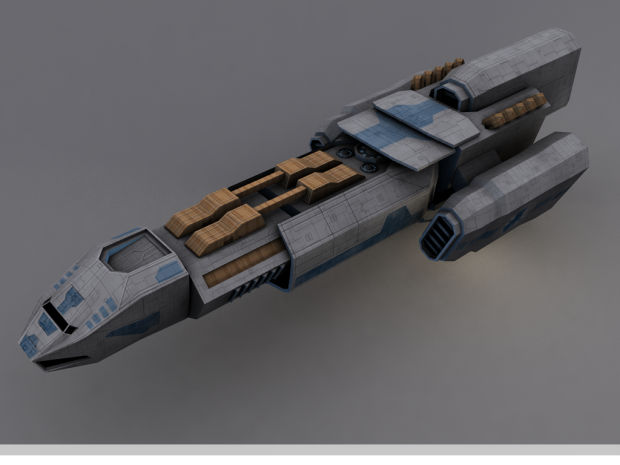 Wow, that looks very good. Congratulations on the 7 years, keep up the good work.

so pretty, congrats on the 7 years corey and crew, we're all itching to see what ya got up ur sleeves still.

For some reason this really reminds me of a shark...I can even see the crooked smile (under the forward viewport) Anyway, yet another great skin!

it also has a striking resemblance to the Tartan Patrol Cruiser, now you come to mention it...?

Fast and deadly, the Vigilance was equipped with a powerful array of missiles able to home in on and destroy enemy starfighters. Originally intended to be fitted with a cloaking device, a miscalculation in the design phase meant it was physically impossible to install the generator acquired for the purpose. Instead the spare internal space was used to install a more powerful sublight engine which provided the Vigilance with incredible speed and, like the planned cloak, made it almost impossible to trap.

This is the second last of the EotH ships to be redesigned since the initial release, with only the Massias left yet untouched. This too will be addressed.

Concept and model by Slevered.
Skin by Corey