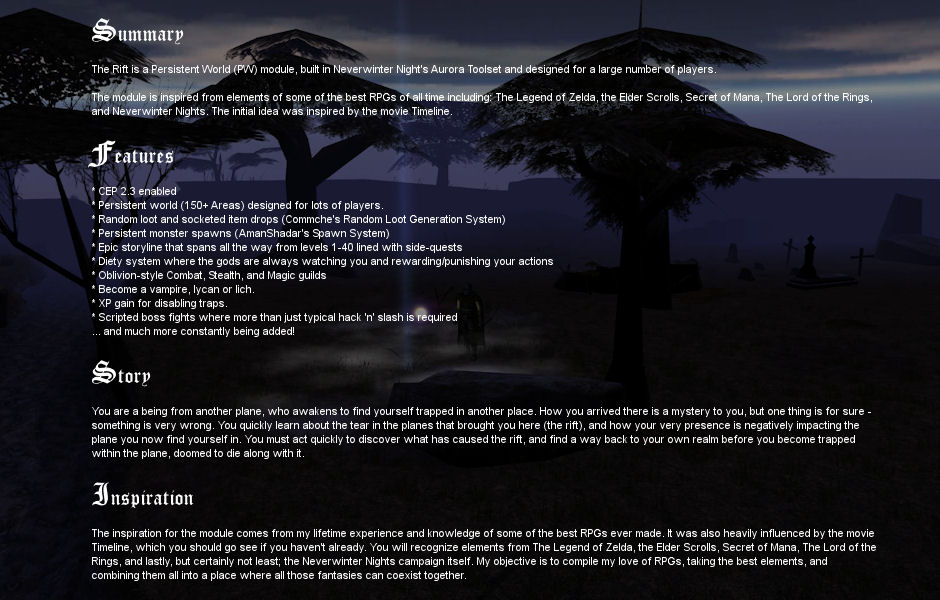 Test Server is Up!!!

Thanks to my friend Phantom, The Rift finally has a test server! The module will be hosted under the "PW Story" category as "The Rift". Or, for the uberleet, the server IP is: 67.60.130.70

Progress has been good up to this point and I've made quite a few module-wide changes. The most prominent change is the addition of socketed item drops, courtesy of Commche's Random Loot Generation System. The addition of socket/random/rare item drops on all mobs makes for a unique and fun experience where you're always hoping for a good drop. Also, nothing really feels like a trash mob anymore. Often times I found myself pulling whole groups of orcs to increase my chances of getting good items and I was pretty surprised at what I got sometimes. :)

I'm also trying unsuccessfully to implement sub-races into the module. I've been trying to use the SKIN_Support function but haven't gotten it to work properly yet, no matter what I've tried. I downloaded a custom system that looks pretty nice but I'd rather code it from scratch if I can (since one of the main goals of building this module is to teach myself programming). I've looked up all the info I could possibly find on the function and posted a question on the forum but haven't heard anything back. Woe is me. :/

In happier news, I've added a lot of polish to some of the starter areas in preparation for the initial testing. Since I've changed a lot of the first quests I've done over and over again there were a lot of inconsistencies and, unoptimized code and misleading directions. Most of those should be fixed by now to make it easier for the beginning player to figure out where to go and what to do at a glance.

Also, I've almost finished the Vampire/Lycanthrope system. I decided to adopt sunlight damage from Oblivion, so that when a player who has become a vampire is exposed to sunlight, they will take damage. The scripting I have in place is pretty awesome, but could be better if I could get the GetTileSourceLight1Color() function to properly detect the color of the tile based on the player's current location, as a finishing touch. Right now, the script returns false if the player is in an interior area, or the time is dusk or night. Both of those work fine, but it will return true in an area that's set to Always Night where sunlight shouldn't exist, so the player takes damage regardless of the fact that there's no sunlight simply because it's literally a daytime hour. The NWN Lexicon goes on about having to declare a vector or something, which kinda works but it's really retarded. I'm thinking about just setting a variable on every dark area and calling it good, but if I can get the tile source light to be detected properly it would make for the ultimate vampire script.

Other than that, the starter areas are mostly finished and, at long last, I'm finally starting to move into the higher-level areas to the east. If you decide to test the module, I hope you enjoy it and will leave feedback for the experience thus far. I'm always open to criticism and welcome any suggestions you may have. I've put months of work into the module and would hate to have your experience be a bad one due to a few small bugs or features that might easily be changed. ;)

Over the past month I've made some big changes and have been testing constantly. As of now, all game-breaking bugs have been dealt with and the module...

You awake to find yourself trapped in another place. How you got wherever you are is a mystery to you but one thing is for sure - something is very out...

Single & Multiplayer
Tags
Embed Buttons
Link to The Rift by selecting a button and using the embed code provided more...