The Worry of Newport

The Worry of Newport is a two part Horror/Mystery built upon Crysis 1. It is an interactive narrative and story built upon the first person perspective around immersion, story, and atmosphere.

The final news announcement for Worry of Newport, the Crysis Horror/Mystery series, written by C-zom.

After 9 months of development, writing, polishing and crafting, the team behind Worry of Newport is at last at the end of the long journey. It is done, split across three hours between two parts, and is ready for you to play.

I am at a loss for words as to how to introduce the last news release for Worry of Newport, and the last release for the mod itself. The story comes full circle now, with both parts fleshed out and polished, and no expansions or further mythos is planned at this time. What can I say? We are all beyond grateful for your support, your viewing, your subscribing and your kind words upon the release. We made this for you, the true horror fans looking for a particular kind of strong and moving story and atmosphere. It is a labor of love, and while not perfect, is the best with what we could work with.

We present to you humbly The Worry of Newport:

Thanks to jason187781 for being my secondary developer, and being the sole trackview and cutscene artist. Without you so, so much of the stuff done here in Newport would be impossible based on my limited skills in those fields. He did a remarkable job and pulled many late nights of utmost dedication to make them as polished as possible. I think you will all appreciate what he's done with ambience, cutscenes, setpieces and more.

To KillerTruffle for providing a remarkable performance as The Protagonist, evoking some of the most emotive and tense voice acting I've heard in a long time in a horror game. Without your performance there would be so much missing from the project, and it is remarkable it is your first large role. Thanks for coming on board, contacting me, and quite literally saving the day back in November.

To Seaglass for auditioning for the role of Aoife Hall. It is her voice voice acting performance and is remarkably talented and emotional, feedback already describing some of her diary entries as bone chilling.

To James Dean for providing brilliant, and chilling, ambient and game play music as well as very heavy emotional interludes in some segments. Your composition style is unique, polished, and worth of all the recognition it will get you.

To Jarod D'Camp for providing the intro and outro, character themes and one wonderful interlude. Your style of composing is heavy, layered, polished and quite original. Off key instruments, odd time signatures, and perfect control lend itself to some purely chilling and sad tracks.

To my sister, Rana, for providing all the artwork in Part 1 Director's Cut, telling a wonderful loading screen story. She did all that artwork in two hours, without stopping. It is hard to wrap my mind around that.

For Matthew Washburn for providing all the artwork and concept art for Part 2, used in its many loading screens. Your sense of style and detail fits the atmosphere perfectly, and I'd be in quite a rut if I didn't get your help.

It has been wonderful working with all of you.


As you know, the Worry of Newport is a playable narration, with no combat, a few puzzles, but mostly exploring, reading, and listening and observing through some truly horrifying setpieces. Upon release people are comparatively saying it is Lovecraft meets Myst, and I can say with careful thought, that is pretty accurate. But the gerne is the fickle part. Some say its a horror, some say mystery. I'd say its a Lovecraftian tale with subtle romance undertones in Part 2 due to the heavy character triangle. Worry of Newport is much more than the sum of its parts, as it tells a carefully written--and fully unique--interwoven story. It is as sad as it is chilling, it invokes laughter and eyebrow raising tension. It will most likely stand as my best story, for quite a long time.

And with that, some screenshot thumbnails for the sendoff. I hope you guys are as excited as we are to release. Cheers, everyone. 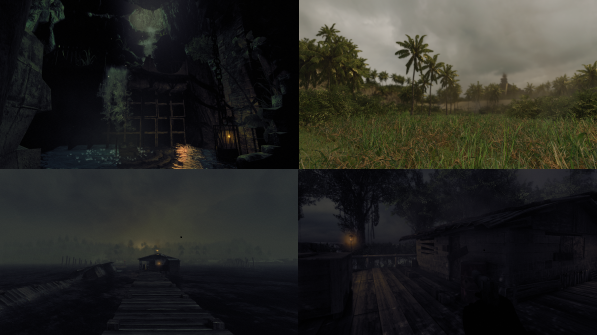 Cool! I will have to find the time to download and play through the whole thing somtime soon.

I played the original version of the first part and was very impressed, it will be interesting to see where you went with the story after that.

Part 2 is dark, and not in the modern "edgy" way. Its actually pretty damn heavy in the occult and dark undertones. There are a *lot* of underlying themes, side characters, and continuation that is easy to miss but also a very clearly spoken main story.

I'd say Part 1 is mysterious and spooky. Part 2 is scary and downright sad at times. I think players will be very comfortable with the shift, and as a whole, the story works fine for what its message is.

Hey, do you think about making a making of?
And sharing full script to read after playing over twice :)

Full storyboard is gonna be up in a week or two as to avoid immediate spoilers, but yes. It is a very nice package and includes a lot of stuff I've made for the fans. Its already "done", but I want to wait a while.

Awesome. While waiting, a few more playthrough would be good :)

Posted about the release here: Modsentry.com congratulations on finishing it!

Despite being a huge wuzz when it comes to horror games and the like, I think I'll download this before work tomorrow and give it a spin after.

I Think I know Why you have the low FPS problem wen pressing F on something. Lets say you want to put a shape and area trigger around a squad member. and wen you enter that area it triggers the trigger to allow you to press an assigned key, and allow the squag member to follow you. Now wen he starts to follow you the shape and trigger thats most likely linked to him moves with hism and the engine cant handle it.
However if you utilized USE and made the out put to allow follow after use then no problems. Hope this helps maybe lol

Thumbs up for KillerTruffle, he's awesome!

Horror-Mod Fans! Other with 175 members