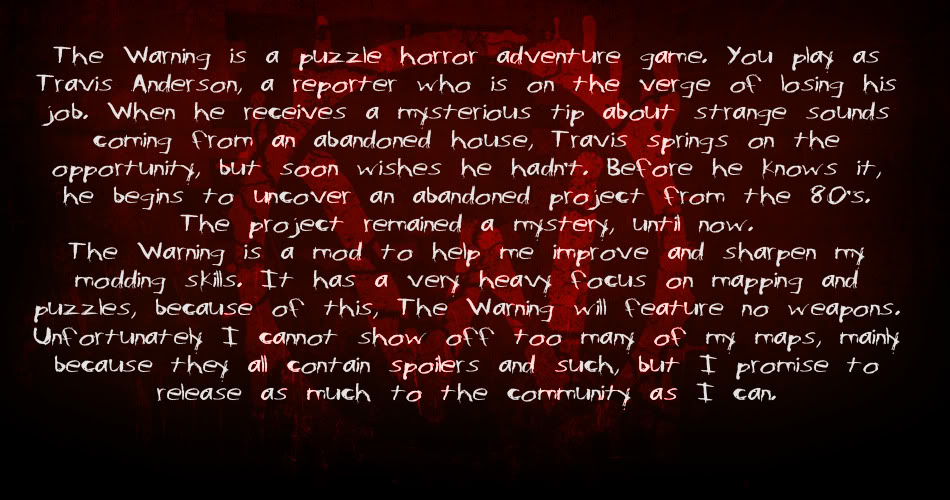 I've decided to make a forum for The Warning. Its very simple and only has two categories, but I'm hoping to use it as a tool to give you a better mod. One category is a development log, where I keep track of what is being accomplished by the mod team and you can comment on it. Its pretty much Twitter, except on ModDB. Furthermore I also made a "Ideas and Suggestions" category where you can post your ideas and suggestions obviously. I encourage anyone watching the mod to go ahead and post for example an idea for a level, an idea for dialog, to suggest a scary scene, etc. I made the forums for you, so go ahead and use it!

The Warning is a puzzle/adventure horror mod. Explore an abandoned underground facility as Travis Anderson and uncover its mysteries. The Warning will...

The Warning has some News about its development and its future.

well this mod is dead

Is this dead? It looks pretty good.

This shud be coll if it dident died :(

Checking in again. Most of the team has been busy during the winter, and probably won't really be available till summer, so progress has slowed. Don't be surprised if its a while till the next update. Oh, and happy holidays.

Hey, just dropping a line to let you all know we are still kicking. We will have an update out as soon as we can.

I like it, especially that "Maintenance Shaft" I would suggest to work on the lighting a little bit. You should add more sources of light and you should work with different contrasts such as the color contrast, Warm vs. cool colors and so on.
Add more details to your level in order to create atmosphere & immersion. I think that you are on the right tack, I can see a lot of capability so keep going. Can't wait to see more !!!

Thanks man! Those are great recommendations, I'm working on adding some more detail right now and the lighting is getting a overhaul on some areas too.

Single Player
Tags
Embed Buttons
Link to The Warning by selecting a button and using the embed code provided more...