You play as Melody Crosswell, the eager titular space pirate! Fight aliens, monsters, and angry security forces as you punch your way to the top!

The First Hunt is a demo centered on our new gameplay mode, BOUNTY HUNTERS! Take Mel into the Battle Zone with two unique loadouts and fight to get the biggest payout! AVAILABLE NOW!

Please report any bugs you find by either posting here or posting in Blue Vertigo's Discord server!

Thanks for voting and helping The Space Pirate on it's quest to become the 2022 Mod of the Year. You are now in with a chance to score some free games from our #modlove collection. Help this mod secure more votes by embedding the widget (or link) we have included below on your favorite sites.

Alrighty, after a bit of a break to work on other projects, we're making our way back around to TSP with an upcoming brand new demo: Second Attack!

This will be our last demo centered around the Bounty Hunters gameplay mode and will feature three new maps! I'll show off the first of the three here. 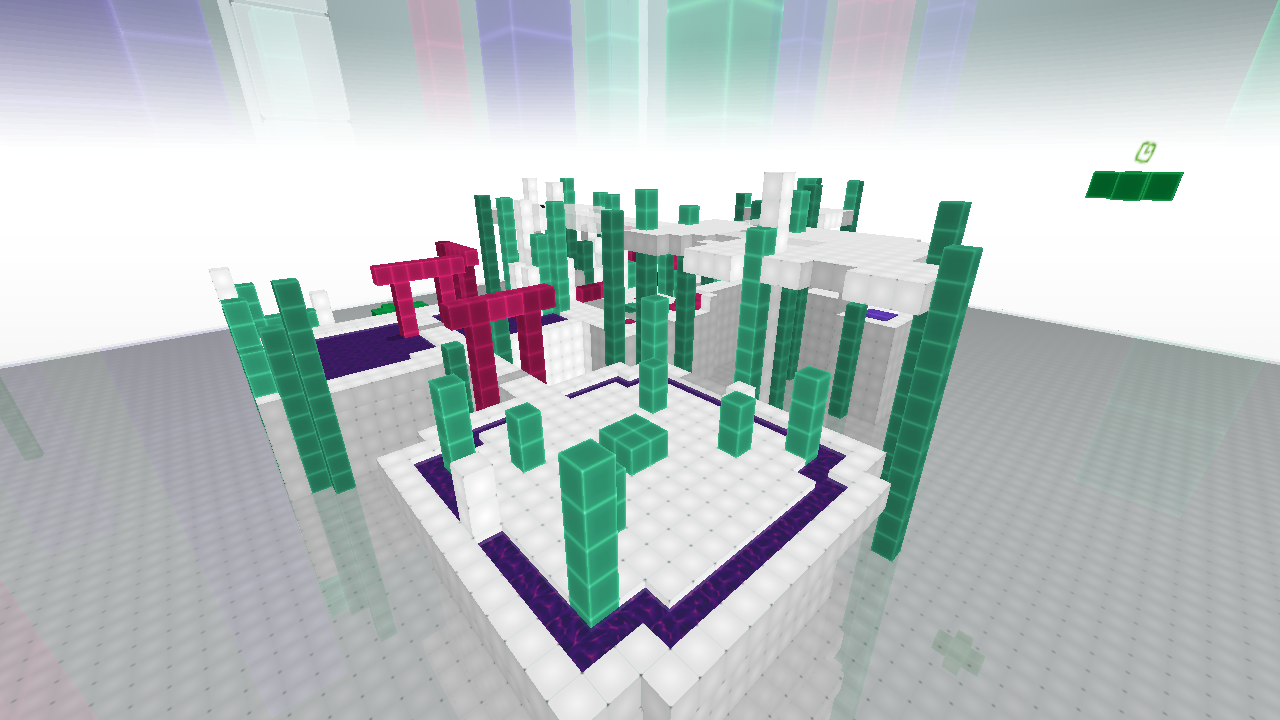 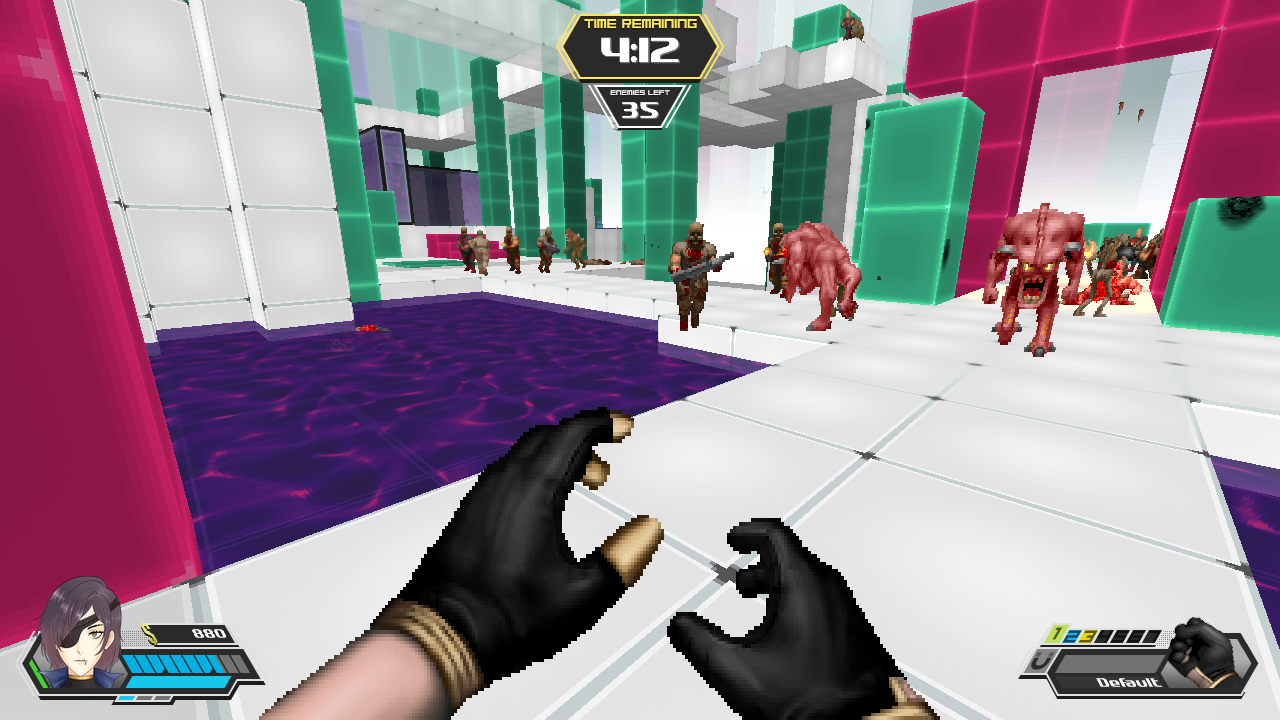 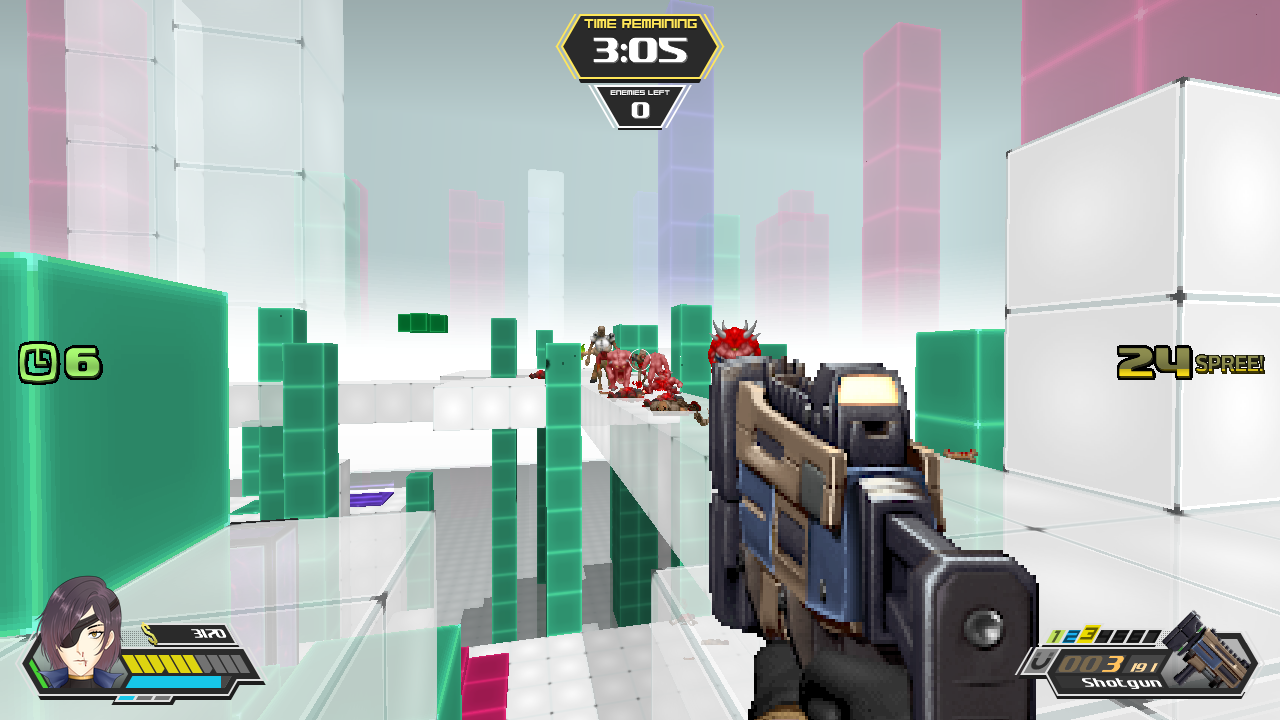 Battle Zone 2 features a slick coat of paint to the Neoscape aesthetic! Lovingly crafted by AILENE, Mel can use jump pads and take advantage of the level's verticality to fight the opposition! Speaking of new levels, you can also see a mockup of a map currently in progress by DrPyspy here!

One of Second Attack's significant features (technically a bug fix!) is compatibility with monster packs! As you can see in the above screenshots, Mel can now fight against the skeletal cast of Legion of Bones, as well as the rainbow bestiary of Colourful Hell, the forces of Iron Snail, and much much more. We're testing compatibility with every monster replacer we can find, and while not all of them will be compatible, so far the list is pretty expansive!

Besides a ton of bug fixes and the aforementioned new levels, we've also got a new loadout for Mel featuring new mods for Darling Nikki, Suzuka, and a brand new melee stance: Charge Style! We'll also be adding additional features for Bounty Hunters such as a revision to the current score system, difficulty levels, and all sorts of fun stuff!

Our goal is to get this out there as soon as possible, but we'll be keeping in touch with progress as much as we can. After this next demo, we'll be full steam ahead focusing on the core gameplay mod aspect of TSP and fleshing out the rest of Mel's weapon set and features.

Thanks as always for the valuable feedback and support!

The latest alpha for The Space Pirate, version 0.1.2b, has been released!

The Space Pirate team gets an official new member, and that fabled v.0.1.2 alpha is coming sooner than you'd think!

Learn about the new features of The Space Pirate v.0.1.2 in this video! Strap yourself in!

Play as Melody Crosswell in our new mode BOUNTY HUNTERS and our exclusive map, BATTLE ZONE! We're extremely excited to know what you guys think!

Includes voxel replacements for every unique item in TSP, from weapon pickups to ammo pickups!

Includes changes to the behavior of the AB-50 and the secret weapon, along with cool shell-casings, and a WIP brand new weapon: the Bargo Automatic Weapon...

A brand new weapon by Sgt. Shivers, the AZ-MP5! Uses the more common global pistol ammo and is a good, powerful alternative to the AB-50. Mel is able...

A complete rebalancing and fix of the last V1 public build of The Space Pirate. Includes a new weapon and several quality of life improvements regarding...

i just get DECORATE scipt errors

I think your mod is veeeeeeeeeeeery good, but don´t you think it needs at least ONE more weapon? Something like a plasma rifle or a bfg. I mean something a little big more powerful that a rocket launcher. At least with very little bullets (20?/10??/5???)﻿

Are you still kicking?

What maps do you suggest to play on with this mod?

So when the next update will be up?

Nice mod! But all sounds of actors, is in high pitch and robo voice(echo), what's i doing wrong? I trying use other sound output, but nothing changes! And in the end, good luck with modding!