General
The Legend of Zoveus is a fantasy action adventure in a new world, inspired by games like "Zelda" (appeared on super nintendo and N64).

Freedom
We will create a whole new world, where you can walk where ever you want.
There will be a lot of quests, dungeons, items and charakters, which you will find during the game playing the hero Zoveus.

Story
The story is pretty unusual for a fantasy game
Here´s a little extract:

For a long time the priest stell themselves the story of the endless fight of Good and Bad: At the beginning of time there were two brothers, standing for the equilibrium of the universe, light and darkness.

As time passed other forms of life developed, possessed by the two brothers, who are fighting their eternal battle. So some creatures are more good and some are more bad, but ervery 5000 years a great war comes up. The darkness unites in one person and rules those of weak spirit to take the world into darkness. But there will be someone of pure heart, who will be able to destroy the darkness to restore the equality. But as this hasn´t happen for a long time, it has declared a legend…

The world is changing, the darkness is coming up to destroy the equilibrium between light and darkness, the Good has to proove again, and again a hero has to show his braveness by fighting for the light.

And this is where our story of Zoveus begins…

Born in Ankora, parents unknown, he lives outside the town at the coast…

-thats not the whole story... we will not make it all public, because we think the gameplay would not be the same, if everyone would know what´s gonna happen.

Gameplay:
Weapons:
In the first place there will be melee weapons (eg small, fast daggers or big, slow spears; swords, axes, staffs, clubs)
Bows and other weapons for the distant fight will be added to, while guns are presently not planned.
Of course, a good fantasy mod needs magic- and this one will not be an exception.

Experience- and Skill-System (alpha):
By playing the game you will receive experience points.
If you reach the needed amount of points you can activate the 'learn mode'.
In this learn mode the player is able to become stronger by killing an enemy.
Every enemy has a special element it belongs to. The player will get this "Element-Mark"
during the learn mode. Further, the player can only learn once from an enemy, so there is no learn effect if he kills the same mob in two learn mode sessions.
These element marks influence the skills the player can use. Of course the skills become stronger if the player follows one element instead of different ones.
In Ankora there are unique scrolls which contain the paths the player may go in order to get a master of an element.

Maps
The atmosphere is a little dark. There is the world, a map can be found at the homepage.
Also there will be dungeon maps- One is already completed.

The LOZ Crew just finished two new maps. So you may be interested in some promotional screenshots: 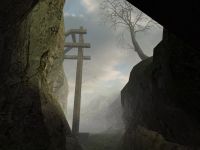 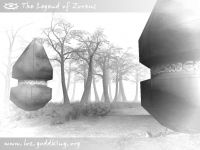 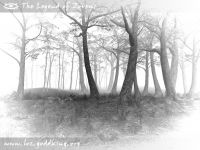 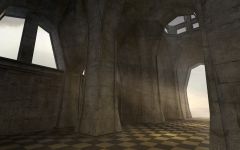 The Legend of Zoveus: Tech Demo

The Legend of Zoveus Crew just finished their Tech Demo. This demo shows the stat and experience system we successfully coded. We hope you enjoy smashing...

In the last time we managed some of the major aspects of the mod: We successfully coded the experience and stat-system. This allows the player to gain...

This is our Team at this time

The Legend of Zoveus: Tech Demo

Installation and starting: -download the demo -download the compressed file and unzip it into the folder "...\Steam\SteamApps\SourceMo...

Looks nice! Looking forward to checking it out!

The fact that there has been nothing added to this mod for years makes me sad. This looks way too amazing to be dead, I would love for this to be finished. Looks like a great story and gameplay would have been amazing as well. If you or someone else could pick this back up and finish it, that would be amazing. So... do that.

Last update was 2006, I'd say the mod is dead. Now If only we could use it's resources or learn how they did a few things from the tech demo.

I have fount out there is a bug where creature's get stuck in the wall!!

This game is god dam amazing but I have fount a bu where some creatures get jammed into the wall!! try to sort it ok!! 8^)

As we have posted at our homepage, we are currently in a development pause until may 2007.
We will continue our work soon ;)

does this mod still live?

This mod is looking very promising...can't wait to DL the final version of it. Looks pretty good so far!

Single & Multiplayer
Tags
Embed Buttons
Link to The Legend of Zoveus by selecting a button and using the embed code provided more...