The Last Kingdom challenges players to control 13 new factions, including the Vikings themselves, the Saxons, Scots, Irish, Welsh and Norman, and to embark on a campaign to dominate the British Isles. With a wealth of new historical heroes, players can lead a range of new units into battle - including Viking Berserkers, Saxon Huscarles and Fyrdmen - while conducting sieges and epic battles.
You can conduct the campaign on a new map focusing on North Europe, in the continent, in the Isle of England or Iceland or starting from the Norwegian peninsula.

The Last Kingdom: Wrath of the Norsemen Expansion V3.9!

- The patch is improving the Gwynedd economy at the start.

- It's adding missing cavalry units to the three factions that didn't have it at the start.

This was done because in order for Normandy to get Norman units they'd need all of the West Frankia areas on the map.

- Frankish factions are no longer allied to Normandy - as the alliance between Normandy and West Frankia happened only after Paris fell to Normandy and the deal was struck afterwards.

West Frankia doesn't have all their regions on the map, so they would be destroyed when that happens.

- Normandy will get Norman units when they hold all of West Frankia's territory - unfortunately West Frankia cannot survive this due to their other regions missing on the map.

- Population Growth Bonuses added for settlements as they upgraded too slowly!

- Menu symbol for the Vikings scripted faction in the diplomacy screen fixed by WarcraftHero.

- Strat-map sounds/voices for the three new factions of Gautland, Oneill and West Frankish Empire fixed by me.

- Invisible rebel stacks in the Oneill starting settlements removed, changing the mod totally for the Oneill faction - it will no longer just stand at it's starting location doing nothing if played by the AI, and if the player is in control it will no longer have trouble moving in it's own territory.

Install in two ways if you have the CD-version:

1. Just extract the downloaded RAR-file using a program like WINRAR (it's free, just search for it on google and download it and install) and after that go inside of the downloaded folder and cut the folder inside of it (with the same name) out from that folder and just place it inside of your \SEGA\Medieval II Total War\mods-folder.

Start the mod by clicking the bat-file with the name "Execute.bat" - NOT the "pagan Normans" or "Baptized Normans"-ones. I don't know if they work with my additions. Use the executive to be safe!

2. The other option, and this is if your game is unstable - install TLK version 3.06 first, and then remove the folder from your mods-folder and place this one in instead. But i think the first option should work fine for most. 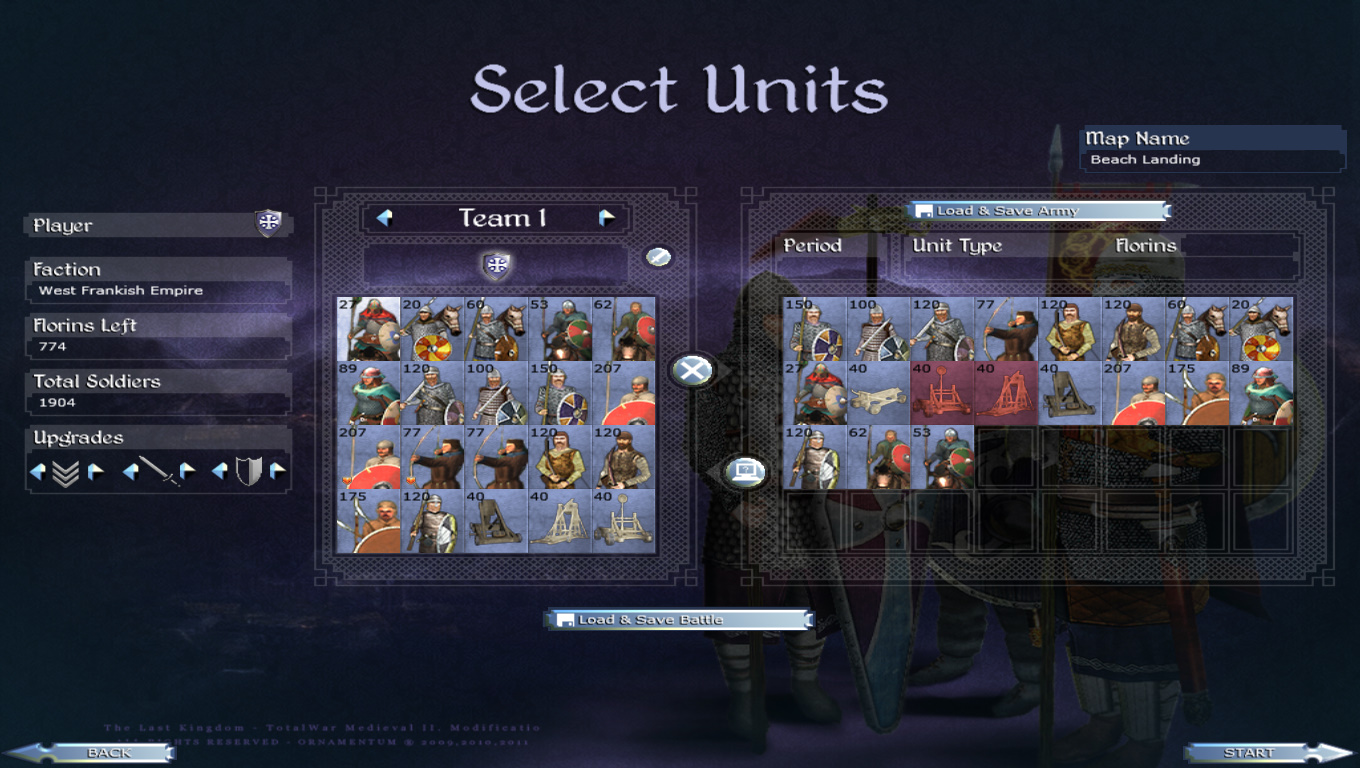 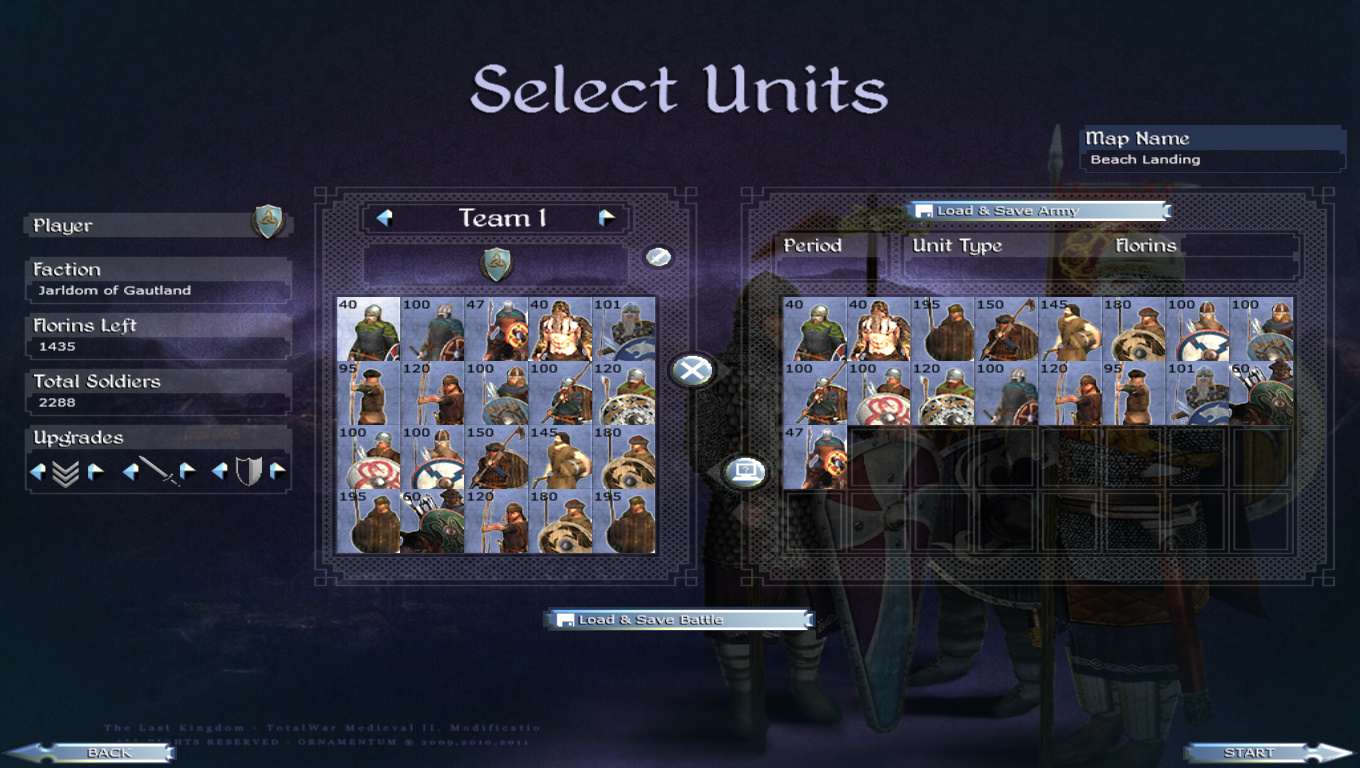 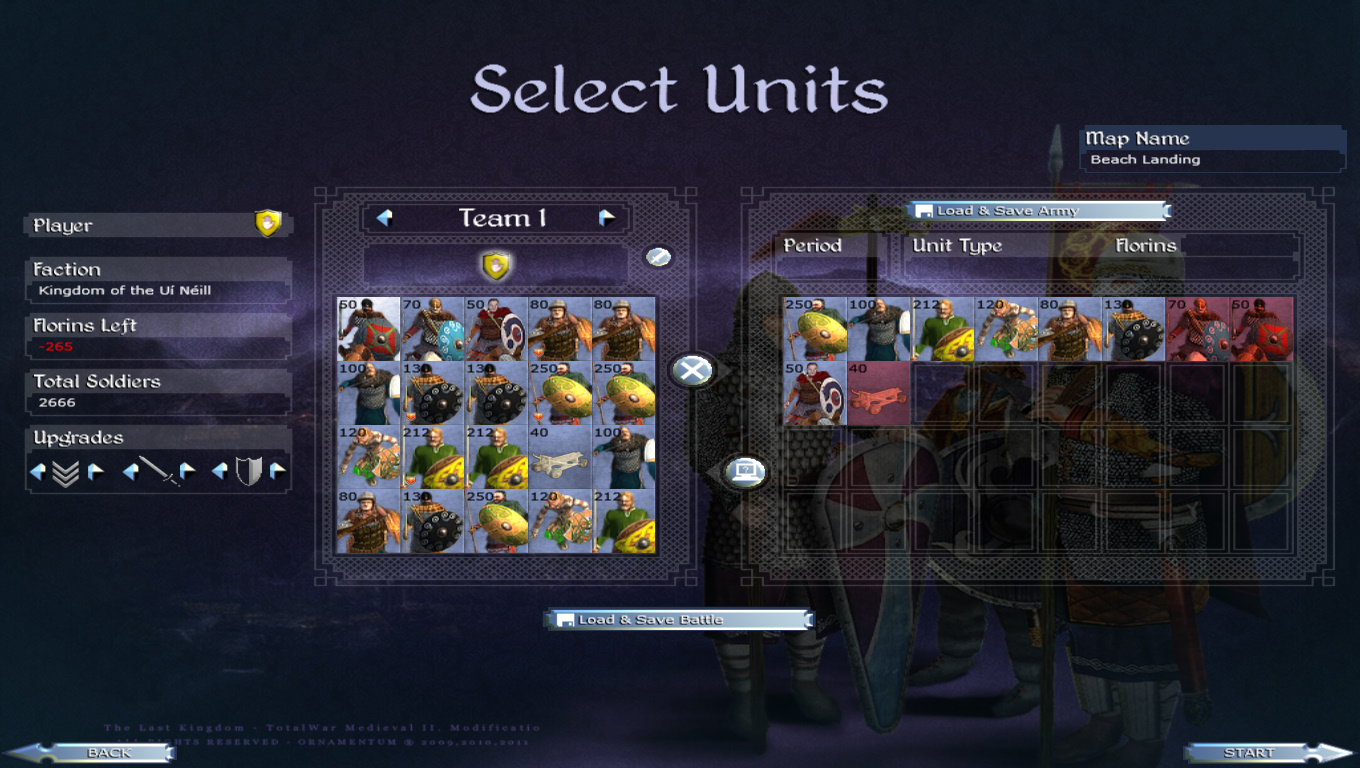 - Two new rosters for old factions - Kingdom of Gwynedd & the Kingdom of Munster. 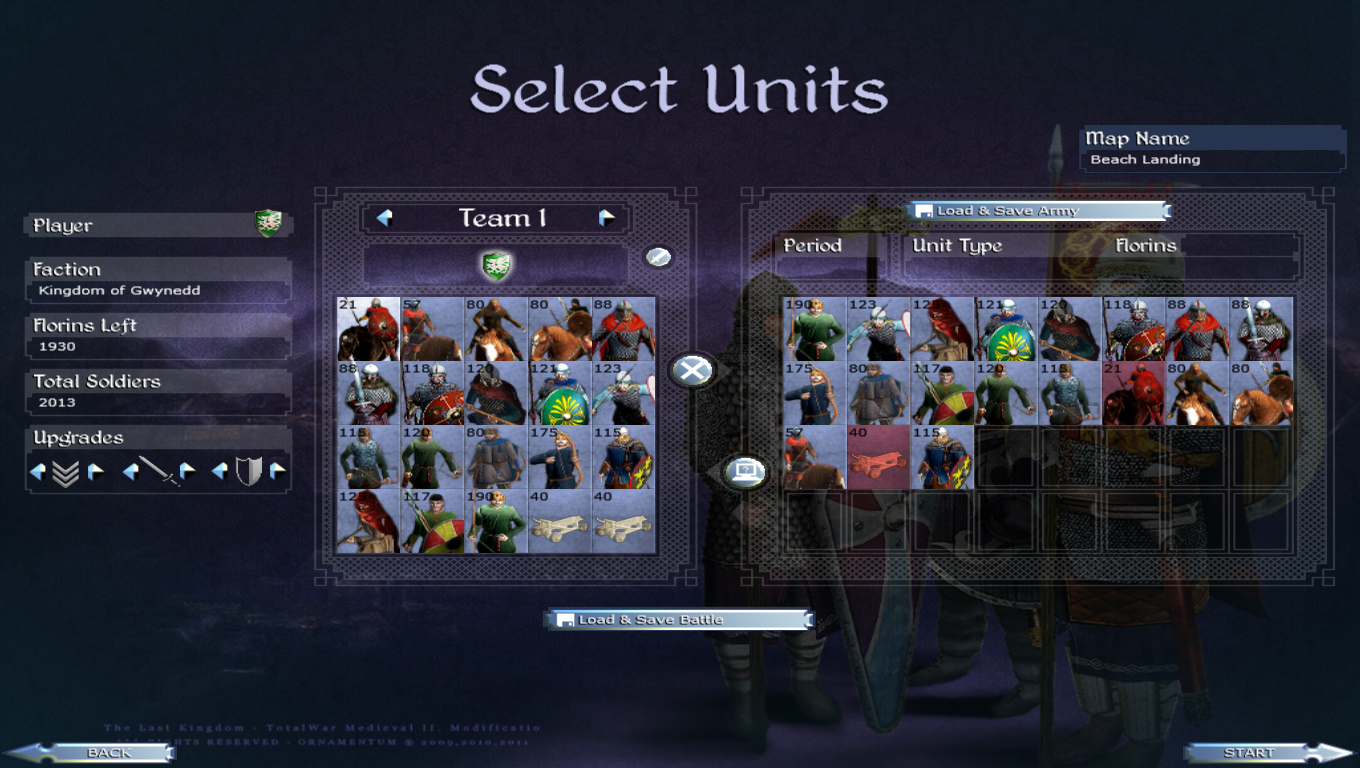 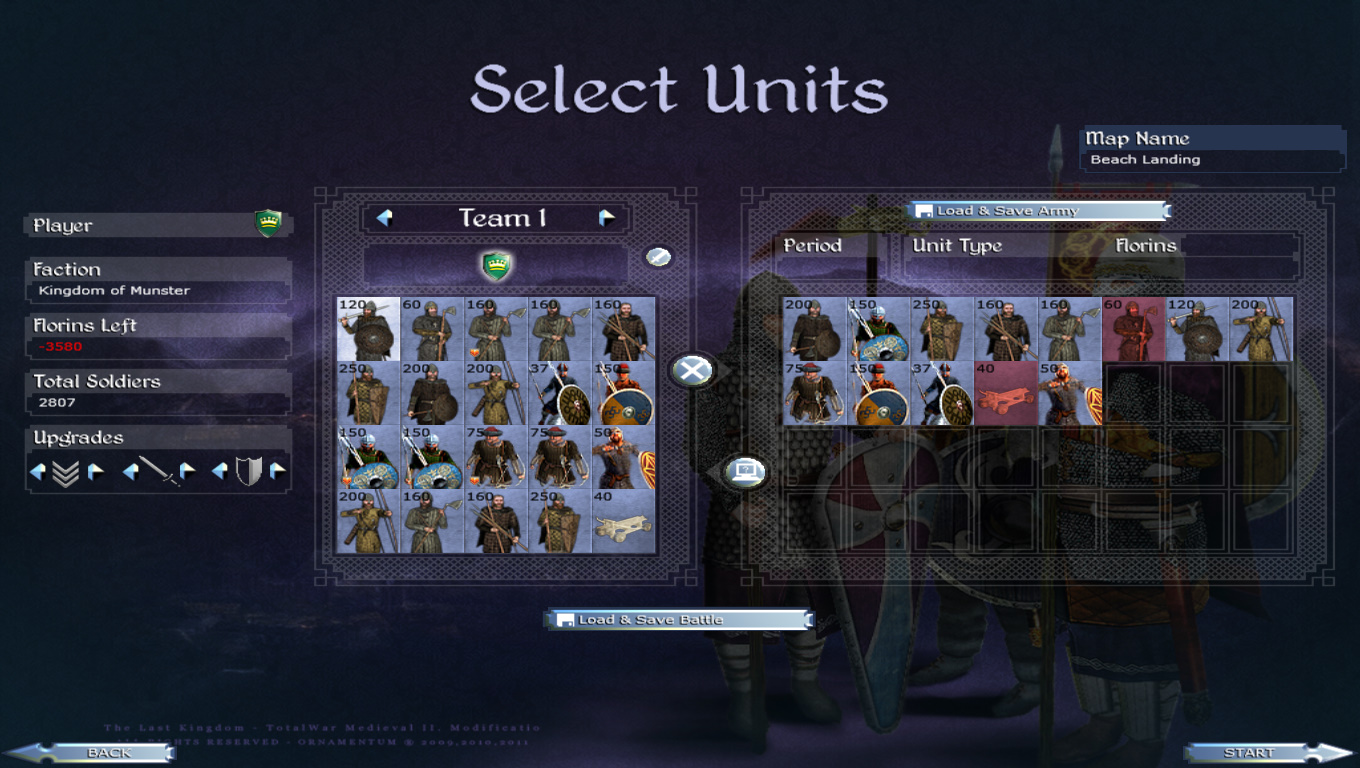 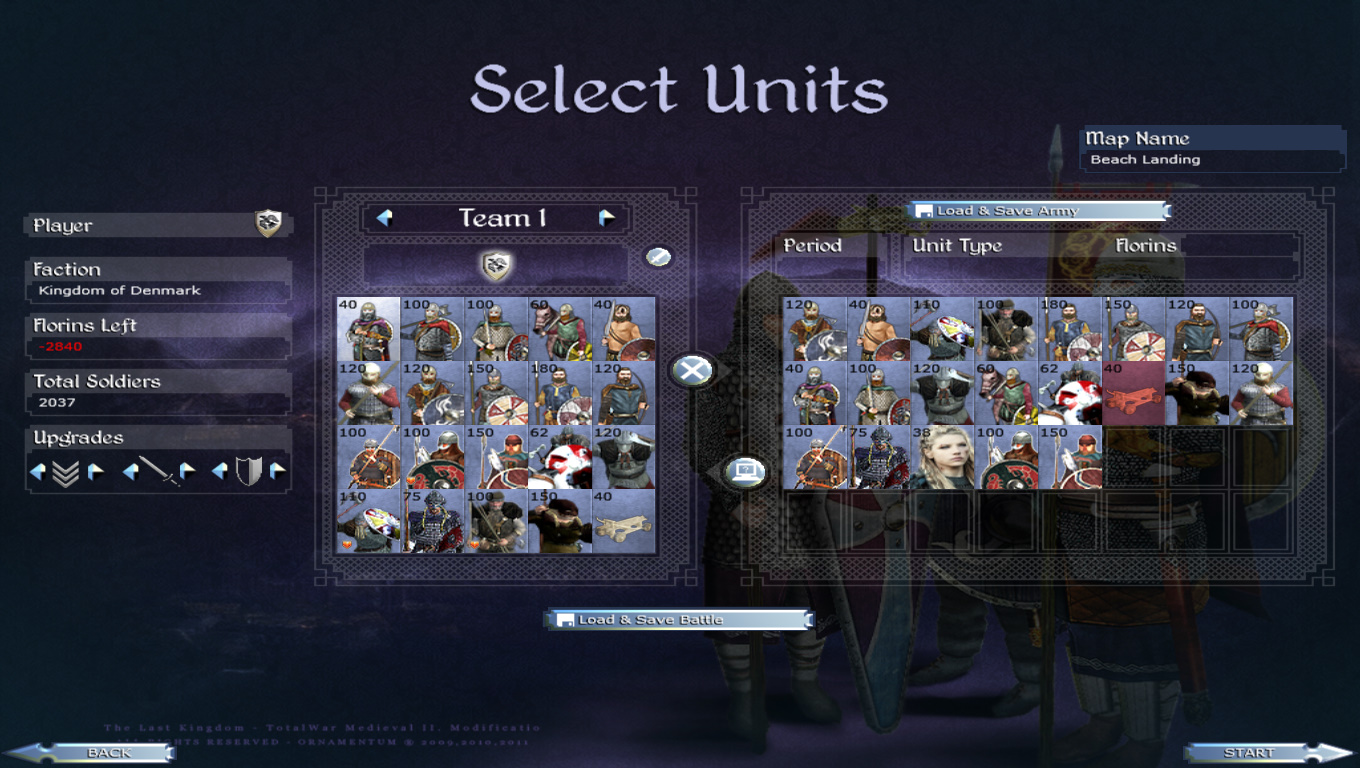 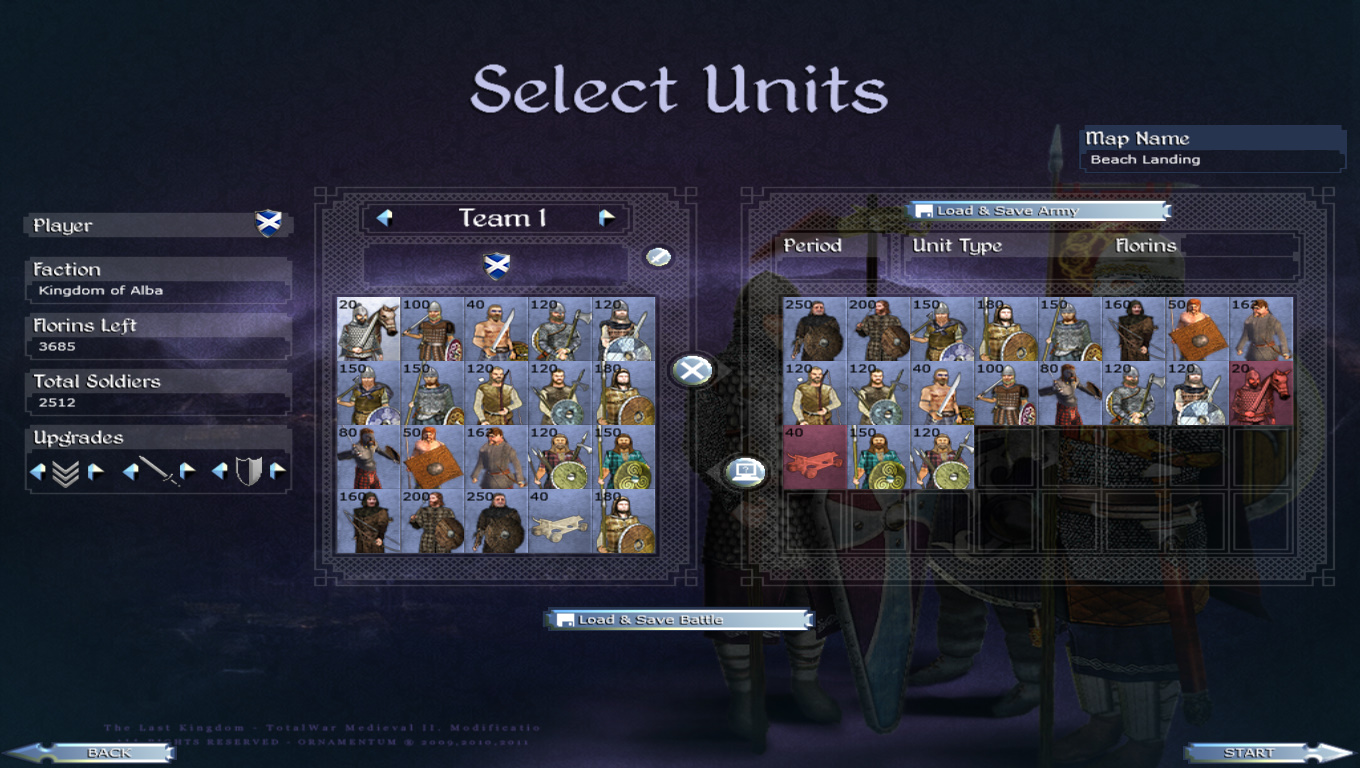 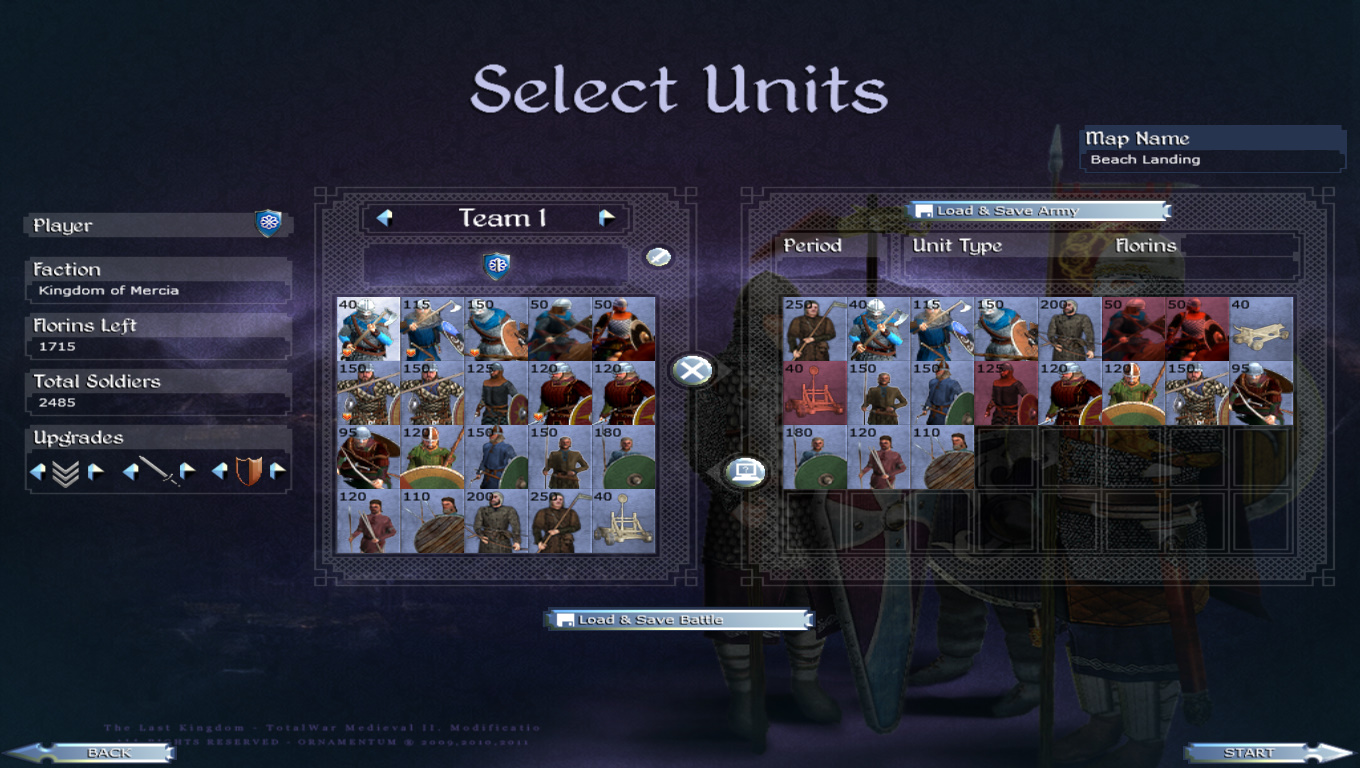 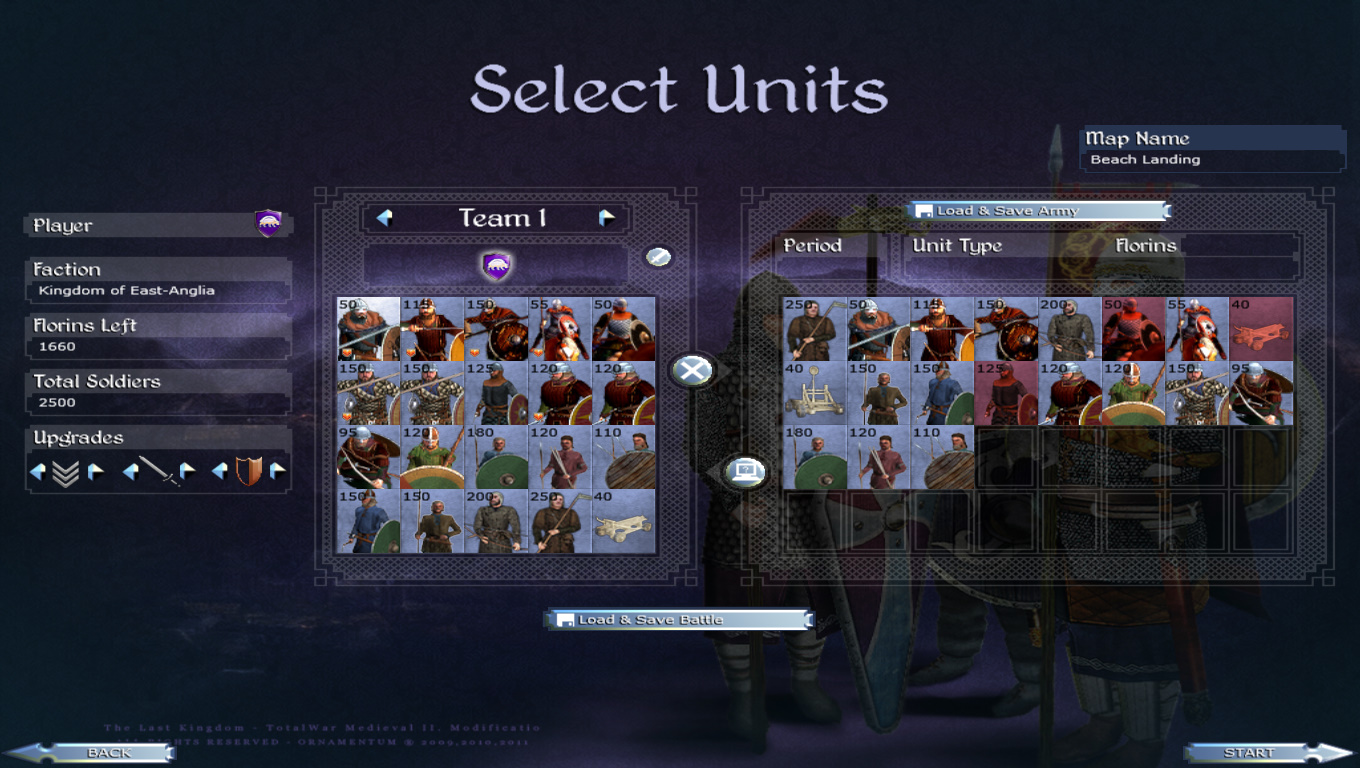 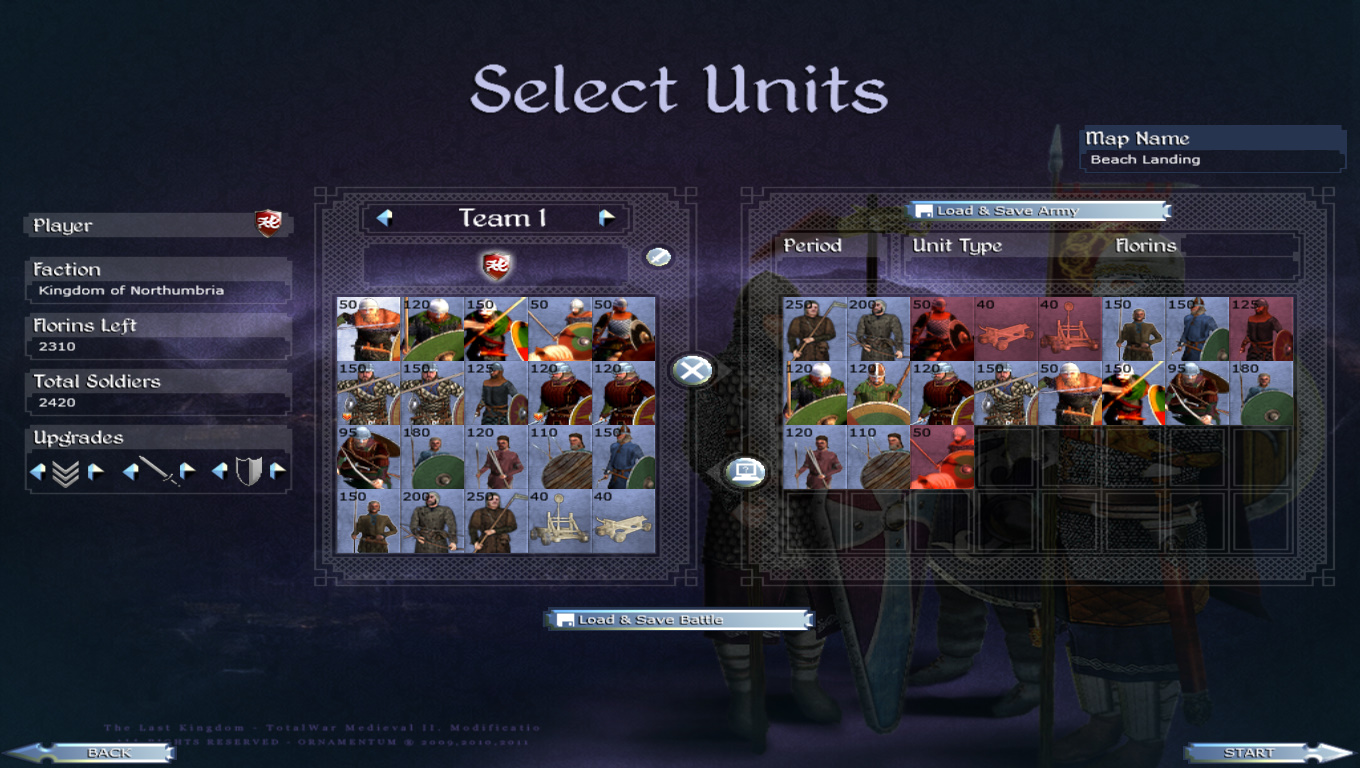 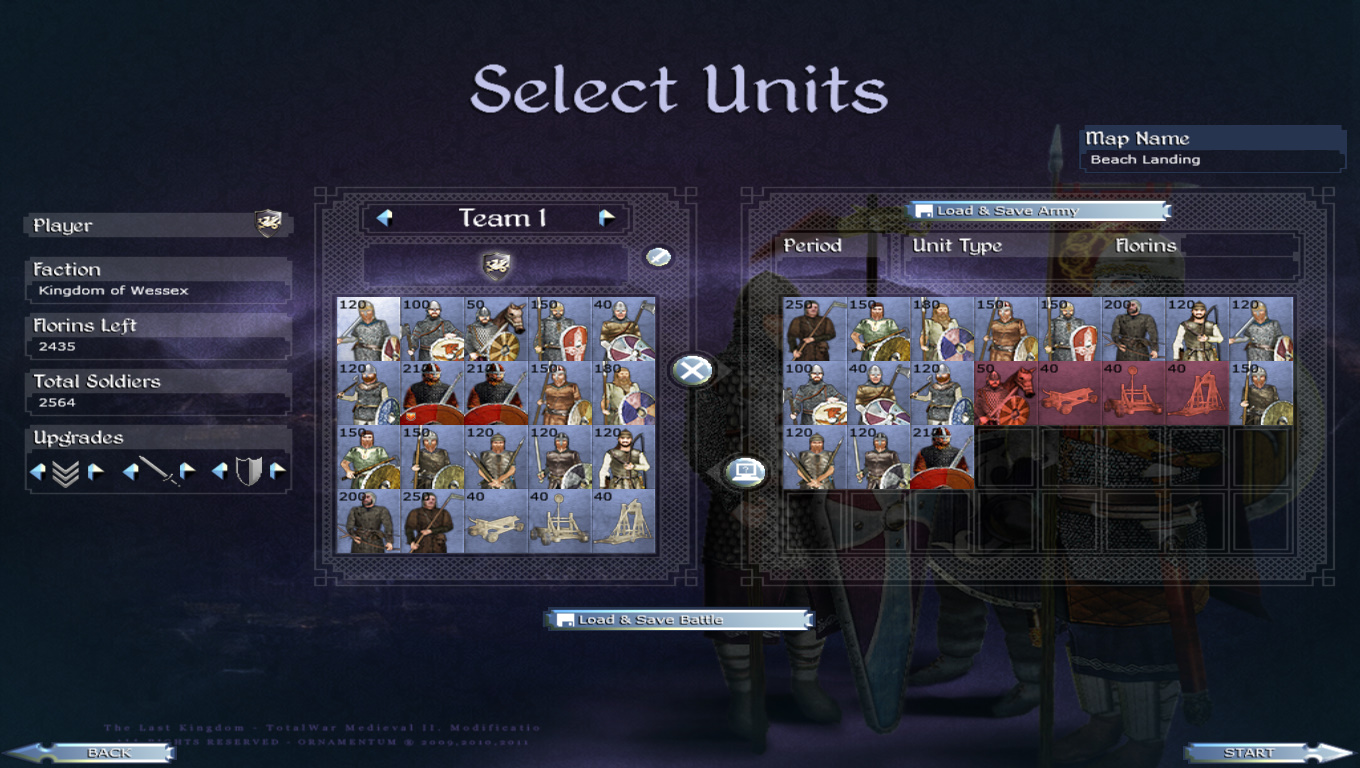 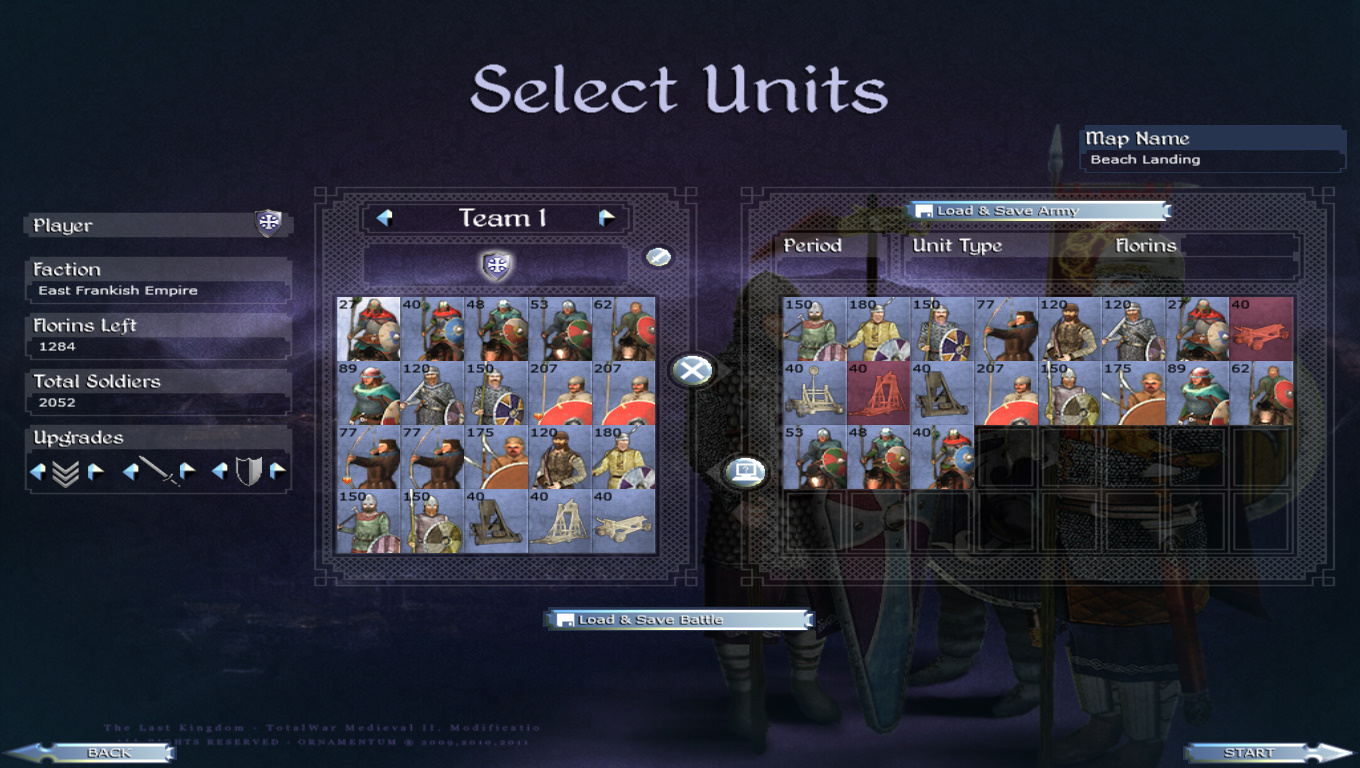 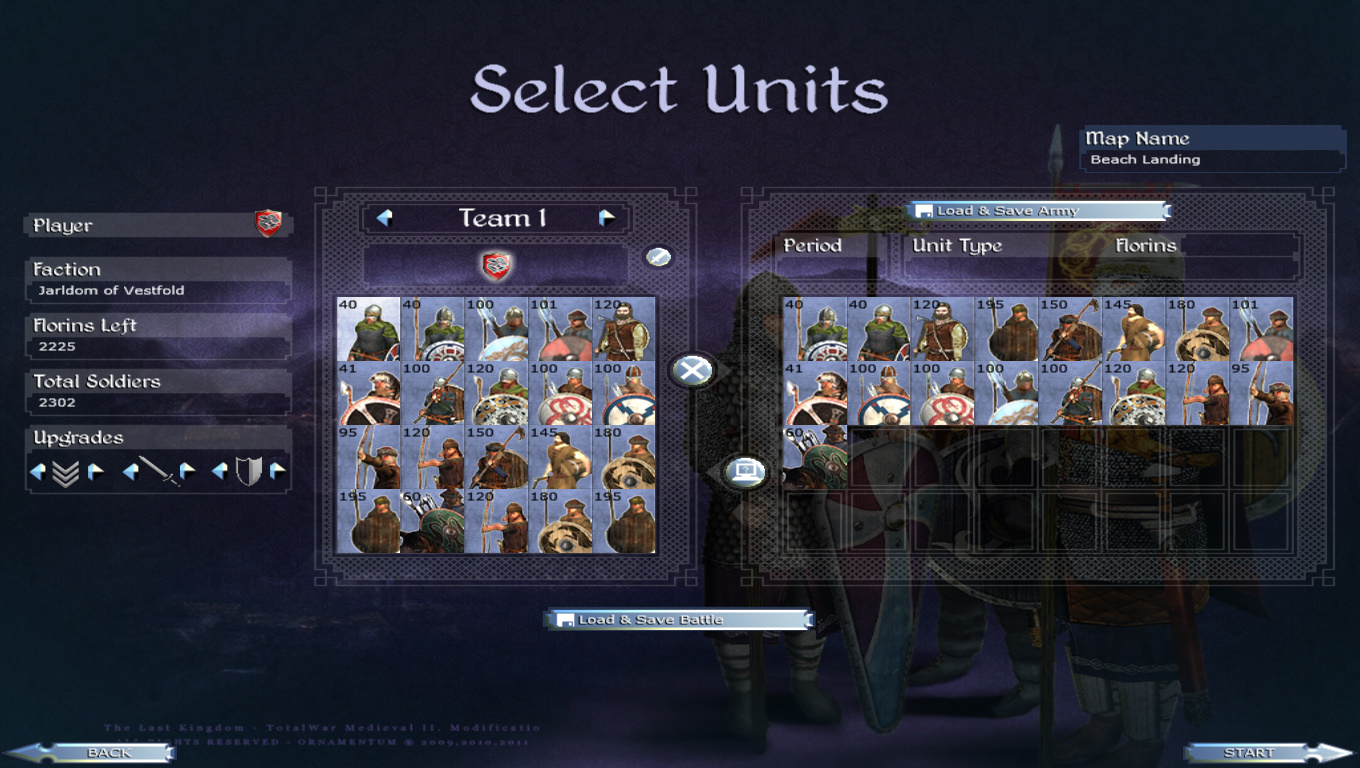 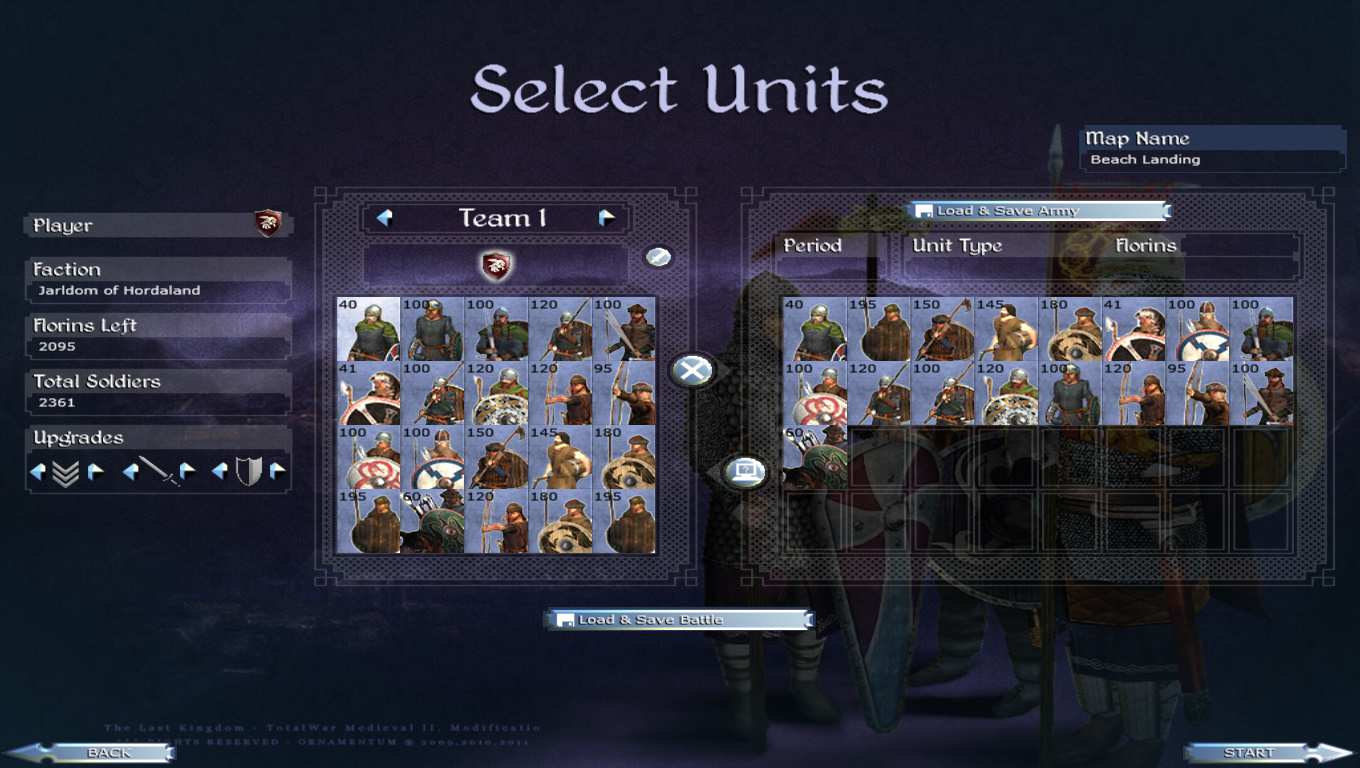 - New portraits for many of the new units.

- New starting alliances and win-conditions for the Irish factions and Hordaland, for Vestfold and Alba and for the Gautland and Denmark factions.

- A few new songs for the Kingdom of Gwynedd on the strat-map - taken from the Arthurian Total war mod for Rome Total war.

- Balance for all the rosters, new and old - and the new units.

- Regional recruitment between the three Irish factions, the Viking factions with Gautland added as well as Denmark's new units and of course between the four saxons and the two Frankish Empire-factions.

- Plus additional fixes, improvements and additions.

- Absinthia - For the creation of new Saxon, Ui Néill and Gwynedd models - plus three of the new Albian models and four/five of the new Munster unit models.

- The War of the West-team - for the creation of the bigger part of the new Munster roster, based on their "Kingdom of the Isles"-roster - and for some basic units in use by the Albians and Saxons.

- Myself (Mr_Nygren) - For all the work on this submod, as i used the assets created by others but did all the work on updating the old TLK 3.06 into this version myself. - Coding, portraits, implementation of new units and factions, gameplay and everything else basically - such as the music-mod.

- WarcraftHero - For the Gautlandi new symbols, and for fixing a gamebreaking issue with diplomacy regarding the Gautland faction after it had been implemented.

- Jurcek1987 - For fixing the Gwynedd General model i think, as it had some issues.

- Paleologos - For providing me with his backup of the Absinthia Romano-Britton roster, after i found an old thread at TWC where he had been sent those units by Absinthia himself.

- Call of Warhammer & it's teamleader - For the Norscan units that i retextured and edited to fit in Denmarks roster!

- Smoesville - For his Ui Néill faction submod containing the symbols, stratmodels, text and cap/gen battlemodels (- I added the new roster, as his submod used the same roster as for Connacht.)

- I myself (Mr_Nygren) did all the implementation of the settlements.

- Rhaymo allows the use of DBM assets in other mods - alas i have permission to use the custom settlements.

I made this submod only by myself- but there are some people who deserves both credit and mentioning:

Danova & team - For the base TLK-MOD!

Absinthia - for the WotN-units such as the Franks, the Northumbrians and the new Vikings - also a thank you to Leif Ericsson for the Vigamenn - Absinthia and Horsa were fine with me using the units, as i am also a developer on WotN currenly - and they told me that Leif would probably be more upset than happy if i didn't include his unit (the Vigamenn) also. I guess i was fine with Absinthia giving thumbs up on that one. TLK and WotN were created by different teams around the same time period - and i know about Horsa and Danova having a sharing agreement which we are playing upon in WotN: Grand Campaign.

Thanks to Heathen Storm also if you have done anything on the units.

But mostly, this was all Absinthias work and he should have credit for the bigger part of the rosters.

Thanks to Darius - for allowing me to use parts of East of Rome: Danube Limes in Wrath of the Norsemen - as this is an "expansion" in the middle of the two WotN-releases - with a clear WotN-connection - i assume this was fine as well - because i got permission for the big one. And this is the same thing but set only in Britain and smaller parts of Europe. Thanks for allowing the use.

Then i wanna thank Wino - for his advice on using Total Commander to help me add his changes on-top of my own submod - thanks man! Would have been very hard without that program.

Thanks to crosscheck86 for his "Swedish Accents"-modification - which i added in with permission from him, and which adds Swedish voices to the Norsemen and Danes! There were no Danish nor Norwegian voices to be found. And it suits the Swedish rebels well.

And finally to Rhaymo, the creator of DBM - for using some of the music of his mod. Not that he ownes the music but it was still in use in his mod.

I wanna thank Derek Fiechter, an artist - for letting me use his song "Celtic Music Instrumental - Avalon" in the mod - on condition of mentioning him.

THE LAST KINGDOM: WotN EXPANSION SUBMOD: Kingdom of Northumbria VS the Kingdom of Wessex:

THE LAST KINGDOM: WotN EXPANSION SUBMOD: Kingdom of Mercia VS the Kingdom of East-Anglia (NEW):

The Last Kingdom: Wrath of the Norsemen Expansion V 3.8!

Updated july the 23, i suggest everyone to download this version when you read this - it adds the custom settlements to the mod, as i figured now that...

Here you can find installation instructions for The Last Kingdom mod.

A little showcase of some of new unit equipments, shields, weapons, banners and so.

This is some features of TLK, including a list of faction, a picture of the campaign map and a preview of a few buildings of the mod.

Updated and fixed version of this mod v 4.0 uploaded today! - I suggest that everyone download this version, as it's a patch added to the huge update...

Latest version of The Last Kingdom mod. It requires Kingdoms expansion v1.05. You can find instructions for installation under "Features" here at Moddb.

Hi does anyone gets the same problem when playing as Normans when they became Christians I get 2 sets of Christian shrine on every settlement and if anyone knows how fix it?

Hi is this mod dead 💀 and buried?

Is there a Discord for this mod?

Hi Mr Nygren I am playing as Normans but don't get any missions is that normal?

It's normal I think.

I know is only a dream, but it would be marvelous expand the map to the west to include also Greenland and Vinland. So you could colonise them as Iceland and face American indians in battle also.

I'm not a mapper so I can't do it. Not sure what happened to the submod based on the Vikings TV-show.

This mod is epic! Dark age Europe and the Viking invasions are the most intresting parts of history (I think so anyway) so I'm glad their is a mod set in this time period!