The Iron Eclipse will be a multiplayer hl2 mod in which the players will be split up into 2 teams. It will involve 2 opposing species, both of human likeness, who are at war.
The players will be able to chose which of the species they like the characteristics of most. Physical characteristics will be the main difference between the two as we would like to keep the game as fair as possible.For the purpose of this explaination, the species will be known as "smotherdron" and "kaka" (this will be updated later) ,
Smotherdron and kaka are from different planets and have both invented a meens of intergalactic travel, comomnly known as space-ships. Naturaly, as these two beings have evolved on seperate homeworlds, their technology
has considerable differences. These could be that a ship created by the kaka people has alot of aggresive shapes and points, a large number of which could quite easily have your eye out. The Smotherdon's design may be smooth and peaceful looking.
The ships will most likely have; side, top and bottom mounted turrets which will be accesable by its team
We believe that this style of gameplay will be very enjoyable, however we also know how you guys enjoy taunting each other face to face so there will be a way of boarding your opponent's ship, we may use teleportaion for this.Team Nightmare has developed a gravity system where, either ship can turn in any direction and both teams will stay firmly upright in their own ship, we hope you enjoy.This discription will be continually reviewed and updated, and as usual we are completely open to your suggestions and oppinions as the players enjoyment of our mod's are our only concern.

Both teams in The Iron Eclipse will have their own style of inter-galactic battle, so therefore their own ship design. Whilst one team has smooth agile looking ships, the other has bulky violent looking ships. Neither outweighs the other for speed/weaponary as we like to keep the gameplay as equal between the two teams as possible. 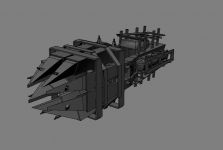 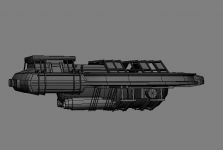 Ship layout is different depending on the ship, players having to make their way to diferent parts of the ship to use certain weaponary, maybe only to have the enemy ship move round to the other side and the player having to run around to meet it.
we hope to make the most destructive weapons have very short range, so that the players get to taunt their enemy player from just meters away. Ship parts scraping together and breaking off is an exciting possibility which we shall try to encorperate.

Multiplayer
Tags
Embed Buttons
Link to The Iron Eclipse by selecting a button and using the embed code provided more...