This mod is built for ZDoom, although as of right now its probably possible to play it on vanilla Doom 2.

This is my first public mod. I am in no rush to complete this. I am working alone on the mod, because the scope of the mod allows it.

I may release a beta of the mod for testing purposes. If that happens, constructive criticism will be welcome. At this point, I know exactly what I want to do with the mod. I'm simply learning the mechanics behind the implementation of my ideas.

The features of the mod will include:

1) 7-9 Maps of original design, belonging to one of three "themes" that fit the plot.

2) Several new monsters, items, and maybe a new weapon. The graphics for these will, in most (or all cases), be re-textured versions of existing monsters/items. My talents allow little else.

3) If I can figure out how to implement them, intermission screens between each level explaining the plot.

4) A well-balanced and progressive experience relating to texture usage, as well as item and monster placement.

I will NOT be attempting to re-invent the Doom wheel with this mod. This is simply something I have started working on in my spare time, because I never finish the mods I begin. I figure now is as good of a time as any to start.

Well, for those that are interested, here's some background information on me:

I am 22 years old. I have been playing games for 16 years, and have been modding and designing levels for them for around 9 years. I have never released my work to the public, because I am my own worst critic. I figure this is a good place to start, with a classic like Doom 2.

I have made (mostly small) modifications or worked on maps for several other games, such as Dawn of War, Doom 3, Duke Nukem 3D, Torchlight (still in progress), Fallout 3, and Crysis.

I am currently one semester away from earning my Bachelor's Degree in Game and Simulation Programming. However, I am not much of a programmer. My focus is mainly on level design.

Now, on to the actual mod-related news. The highlights of my screenshots are as follows:

1) The new Infected Trooper. While not entirely different from your average Zombie Trooper visually, it moves slower, takes more damage, and dishes more out. There will be several "infected" versions of monsters in the mod.
2) A random shot of the first map. If nothing else, I'd like to point out the re-textured HUD, the Health Booster on the ledge, and the slime. Expect a lot of it in the first two levels.
3) The Red Armor, one of my custom items. It doesn't provide much protection (absorbs 33% of damage), but you can pick up several until your armor is at 200.
4) Health Booster. Can take your health up to 200. It provides 5 points of health, whereas the blue Health Bonuses provide 1 point of health each. 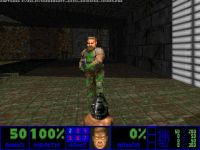 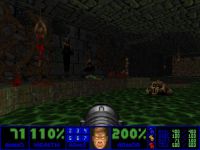 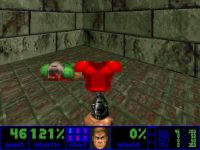 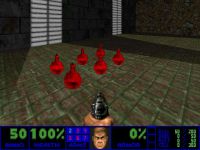 In addition, I have also added a second custom monster, the Spectre Imp. A screenshot would have been pointless, since its almost invisible just like the regular Spectre. In addition to being hard to see, it moves faster than your average Imp, but it also lacks any ranged attack and takes little punishment before going down.

I re-textured the Super Shotgun (to a degree) and implemented it as an additional weapon. It is intended to be a slug gun, but I have encountered two problems. First, it is hard to tell which shotgun is which when switching between them. Second, I would want to create a new ammo type for it. I can do that, but I have no idea how to re-design the HUD in such a way that it would display said ammo type.

I created a fire barrel that burns green instead of normal yellow-ish fire color. I'm hoping to have several props in the finished version. A seemingly small task, but working with sprites is a new method for me.

I have begun working on the second map. I will hopefully have screenshots up soon. Please bear in mind that this mod is the first I'm releasing to the public, I am working alone, and I am, above all else, just trying to provide some old school Doom fun.

I will continue working diligently. In the mean time, I hope everyone enjoys what I have posted. I'll do my best to keep everyone updated.

A demo of my mod. Everything therein should be viewed as a work in progress. Hope everyone enjoys it.

Hey man if this good mod is playable in Skulltag, either in full version or veta or alpha, you need not change the hud to make it show thut you need slugs.

P.S. What sprite editing program do you use? PSP 7 don't work anymore on my comp.

Just want to let those that are watching know that I recently moved into a new place. This is why updates have been sparse. I'm also finishing up my last semester of college. Work on the mod is continuing, rest assured.

It's a shame doom mods aren't more popular here on Moddb because this looks promising.

Thank you. Everything is my own content except for the new weapon sprite.

You should make an infected imp that vomits weird green goo that stings you for a few seconds!!!!!!

I am actually working on the Infected Imp currently, although I don't know whether or not it is even going to have a ranged attack. Even if it did, what do you mean by "sting?" Drain health? Slow movement speed? Paralyze?

I can try, but Doom doesn't support that and I don't think I could code it in. I don't have the know-how for that.

Single Player
Tags
Embed Buttons
Link to The Infection by selecting a button and using the embed code provided more...