In 1942, the Nazis have discovered a strange structure said to possess the ability to control time and space itself to its whim, but was thought to not able to determine its true power.

In 2003, the US government has suddenly found strange anomaly in time and space, resulting in the discovery of the strange structure itself and its "properties", even more surprising when they've actually managed to activate the device, which is known to be almost thousands of years old.

They've tried to send in a squad of trained personnel through the gate, only to have them disintegrate within moments of approach due to their equipment obstructing the gate's mechanisms.
Things start to change for the worse as they send in a single bare armed covert operative that then ceases all contact after successfully entering the gate.

They've decided to finally send in one last soldier.
One that determines the fate of time and if the Nazis shall have reign over it.

Remod is a mod for "The Gate" that brings :

Remod already includes the original The Gate files, so you don't need to need to install the older version, just install this one on your HL installation and you're good to go!

Installation is simple, simply extract the TheGate folder that is inside the .7z into your Half-Life installation folder (Where hl.exe is located, NOT inside any of the other folder such as "valve" or "valve_hd")"

There should now be "valve" and "TheGate" inside you Half-Life installation folder along with any other
mod/steam-related folders you may have inside.

Restart Steam, "The Gate | Remod" should be inside the Games list.

If that doesn't work somehow, create a shortcut of hl.exe, open it's Properties, add " -game TheGate" to the end of the target bar.

It's really rare to find mods for Half-Life 1 that dabbles with WW2 stuff, especially one that goes full Indiana Jones when it comes to its approach, so when The Gate came out, it was quite interesting at first.

The mod itself was fun while its fun, the level design wasn't too bad, the premise and the story can be a bit plot-holey but acceptable, and the new coding along with the new features aren't too bad either. 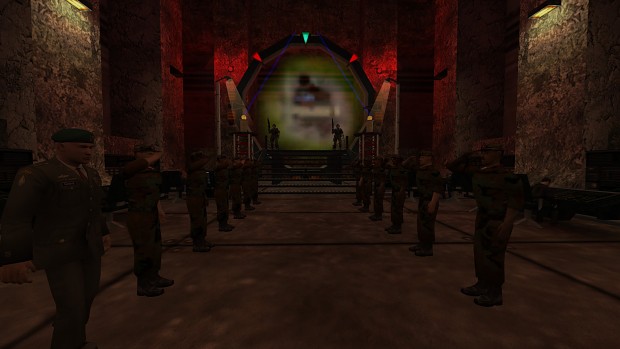 You got yourself some recoil effects for the guns, the sniper now instahits (i think there was even a border thing around the scope this time, though it looks kinda bad since its cut off), the houndeyes are now dogs, some custom scientist entity, there's some new MP3 player that plays stuff that's not from the media folder, there's a limit remover that doesn't crash the game whenever the maps have more than 512 brush models, and a binocular (which didn't make the final cut for some reason). 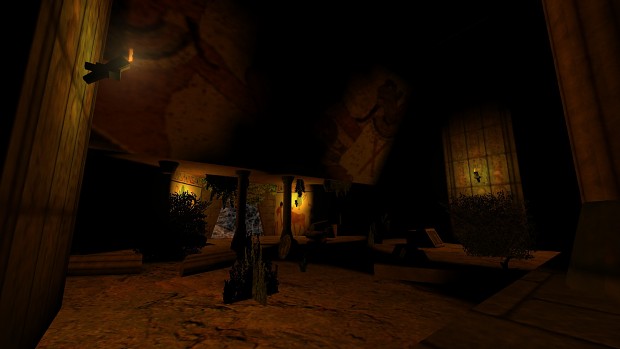 You first start in the second gate in Egypt, near where the Nazis first "find" the first gate, not too long after you'll be sneaking around a tank base, getting some trucks fired up in a small village area before going straight to France, a U-Boat base, and the Bismarck of all places (yes, you even get to actually sink it).

The setpieces were pretty fun as well when they're not pulling shenanigans at you, i personally really liked the mine cart chase in gate15. 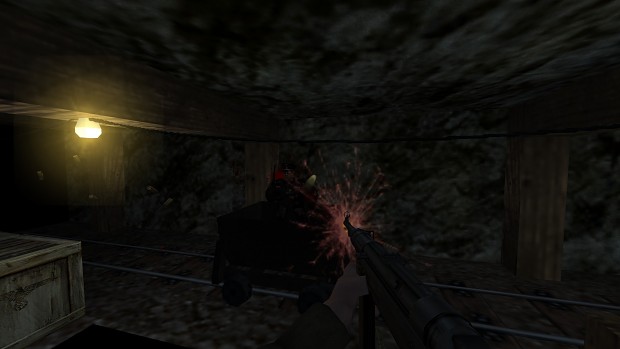 Of course, things really start to fall apart fast before long.
- The creator of the mod seems to be a bit off when it comes to grammar in the subtitles.
- The story itself is filled to the brim with plotholes the size of the Bismarck.
- Odd model choices such as the lady that originally briefs you.
- The coding didn't bother getting altering the gun mag limits (STG still has 50 rounds/Luger with 17).
- The new enemies don't drop their weapons (only dropping a magazine) when killed.
- The sniper is a Springfield (we're in Nazi occupied zone).
- The sniper animations is broken (the first release has the sniper drawing whenever it shoots).
- The sneaking part being frustrating and random due to the HGrunt AI.
- Using a STG44/MP44 in the mod (despite it not existing in '42).
- The increased difficulty and near HGrunt spam (though you can't really blame CJB, Nazi places and all)
- That low-light assault on the desert base.
- The grenade-spamming HGrunts.
- The vague gameplay design that screws a lot of first time players.
- That out-of-nowhere hour long wait in the cell part.
- THAT ACCURSED "LADDER" BEFORE ENTERING THE BISMARCK.
- And most noticeable of all, NPC's that talk but did not move their lips (which is pretty bad considering the story focus of the mod).

This mod had problems, too much problems.
I haven't yet played the sequel, but i do hope that these problems don't persist. 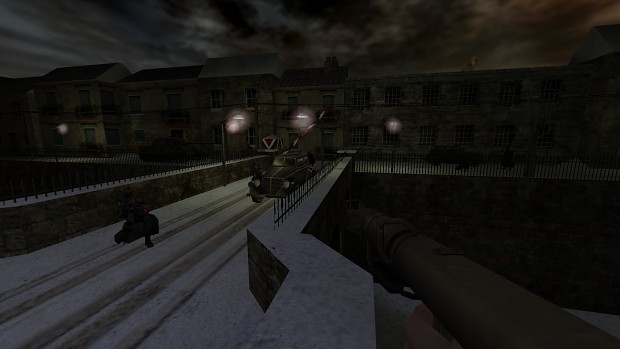 So i altered the maps, for the better or worse (depending on your taste/preference).
Made the vague slightly more obvious, reduced the cell waiting time, removed part of the stealth act (though you still need to hide for that truck part), modify the models, add proper lipsyncing in the mod, and God knows if i forgot any.

It was going mostly fine, though there was one thing that constantly blocked me.
No matter what i did, i just couldn't find a way to get the NPCs mouths to open in scripted_sentences.
And that's when i realized.

Now, a lot of the features don't really depend that much on the coding, so they were really easy to replace, sans a few.

Environment models and custom NPCs either use cycler or monster_generic, already included in the original HL coding.
The sniper acts like the usual crossbow, though i did made the bolts near invisible (instead of completely invisible, useful for tracking where it goes).
Music files are moved and renamed in the media system folder, don't know why they even boasted about that custom MP3 player when HL already have a fully serviceable MP3 player.
The dogs will be missed, though while they do add variety to the enemy roster, i do personally think that they are kinda useless since they were so easy to kill (well, you do have automatic weapons and all).Recoil effects will be missed, though it did slow down the 9mmAR firerate. 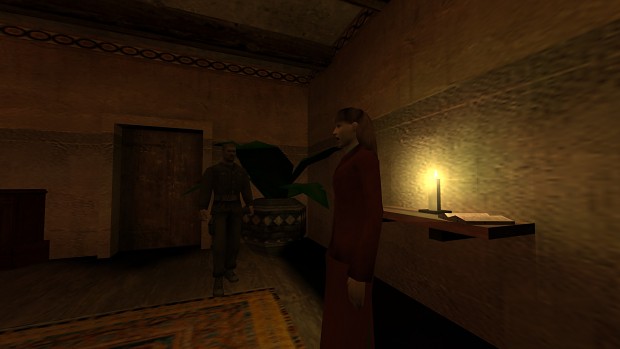 But hey, i got it done, and hopefully the new features make up for the lost ones.

1.0b release for The Gate | Remod. This already has all the necessary files to play The Gate, so no other installations required. Installation instructions...

A small patch that updates the Luger & Kar98k animations... kind of

The Gate port. Just copy TheGate folder to folder where is 'valve' located.

I managed to get the HD remodded version to work ok with xas3d. no mouth movements but hey cool.

I can't believe it. I've played this before now it's loading a fatal error "cant find Barney wad" I sorted that. Now it's saying I can't find Egypt1.wad" gmdemo.wad why?
Dont worry guys it's all me. i've got so many custom textures with half life trying to improve it it's screwed some cfg's.
I installed half life stand alone with updated engine it it works perfect. Wow. Also the song in the cabin when he wakes up.
******* absolutely awesome. I know what the song means. The truth shall set you free. Gate 2 wow.
NO NO NO! I've tested the Remod with Xas3d, HLFX, Steam and Half life stand alone. Ok. The issue with this mod is the sound on the change levels. With HLFX works until you go up the lift where the bird (girl) is hear announcement on Tannoy then sound stops. I fix broken mods mostly Half life 2 but i will persevere
I only want to play this again because i want to play Gate 2. 1 after the other. Peace.

The problem with this one is that, its way too dark, and the enemies (clothed in black) are hard to spot.
Alot of enemy visibility and readability issues

Is it possible to change the behavior of bullet for the sniper rifle ? I mean is acting like a crossbow and the bullet is too slow. Maybe instead using the crossbow as a base , is it possible to use the 357 Magnum ?

While the original coding allowed for hitscan crossbows and the addition of dogs, it caused problems with NPC lipsyncs.

Considering how those two aren't really as noticeable as the latter (The Gate has a lot of cutscenes showing talking characters, and it is most jarring when you see them just standing around while a sound file plays around them), I decided to for a lesser evil kind of thing and removed the custom code. Replacing anything that uses the custom code in the mod with original HL stuff from music to props.

If The Gate's custom code could be modified/replicated to have its original features while leaving the lipsync fixed, I may update this mod later with the dogs and such returned.

How about using the .DLL's from this: Moddb.com

Where is the first weapon you are suppose to find? I have been up and down every corridor multiple times and still can not find it.

Might be a bit late here, but if I recall correctly, the first melee weapon can be found in a dead end after you climb down a ladder. You need to move the top off of a sarcophagus, the weapon is hidden underneath it.

Actually I gave this mod another shot and was wandering aimlessly around and found it in the area with the radio, behind the burning barrel. I did not even see it, I just stumbled upon it. I had also seen the one in the sarcophagus and even moved the broken lid a bit, but it can not be picked up. Even after loading a recent save and not picking up the one above ground next the barrel first, it is still not able to be picked up from the sarcophagus.

i don't know if your aware of this but the briefing segment in the beginning of the game the audio for it doesn't even play i'm pretty sure it has something to do with the bobsmodel cause i replaced it and the audio played.

I'm not quite sure how to fix those kinds of bugs, it definitely doesn't have anything to do with the model as it worked the bunch of times I playtested it.

I had the same thing happen to me. I just stood there without being able to control anything. The cut scene kept going, but with no audio. Eventually I just reloaded the last save and then it worked fine for me.