The Peoples of Eriador

Another article? What is this, Mod of the Year? Yes, it is. Go vote for us.

Rivendell was never a place of great military strength. It was a refuge, protected by the power of Vilya, the Ring of Air, where elves came and lived and continued to do so during the long years of their waning. A place of learning, of song, dedicated to the preservation of history and elven culture. Elf-lords of great might and wisdom lived in Rivendell, but they were not numerous enough to form an army and march out to war.

As such, Age of the Ring has interpreted Rivendell as an umbrella-term for a very diverse faction made up of several of the peoples that lived in Eriador, specifically its northern regions. These subfactions are what this article is about.

Exhibit A: The Men of Bree 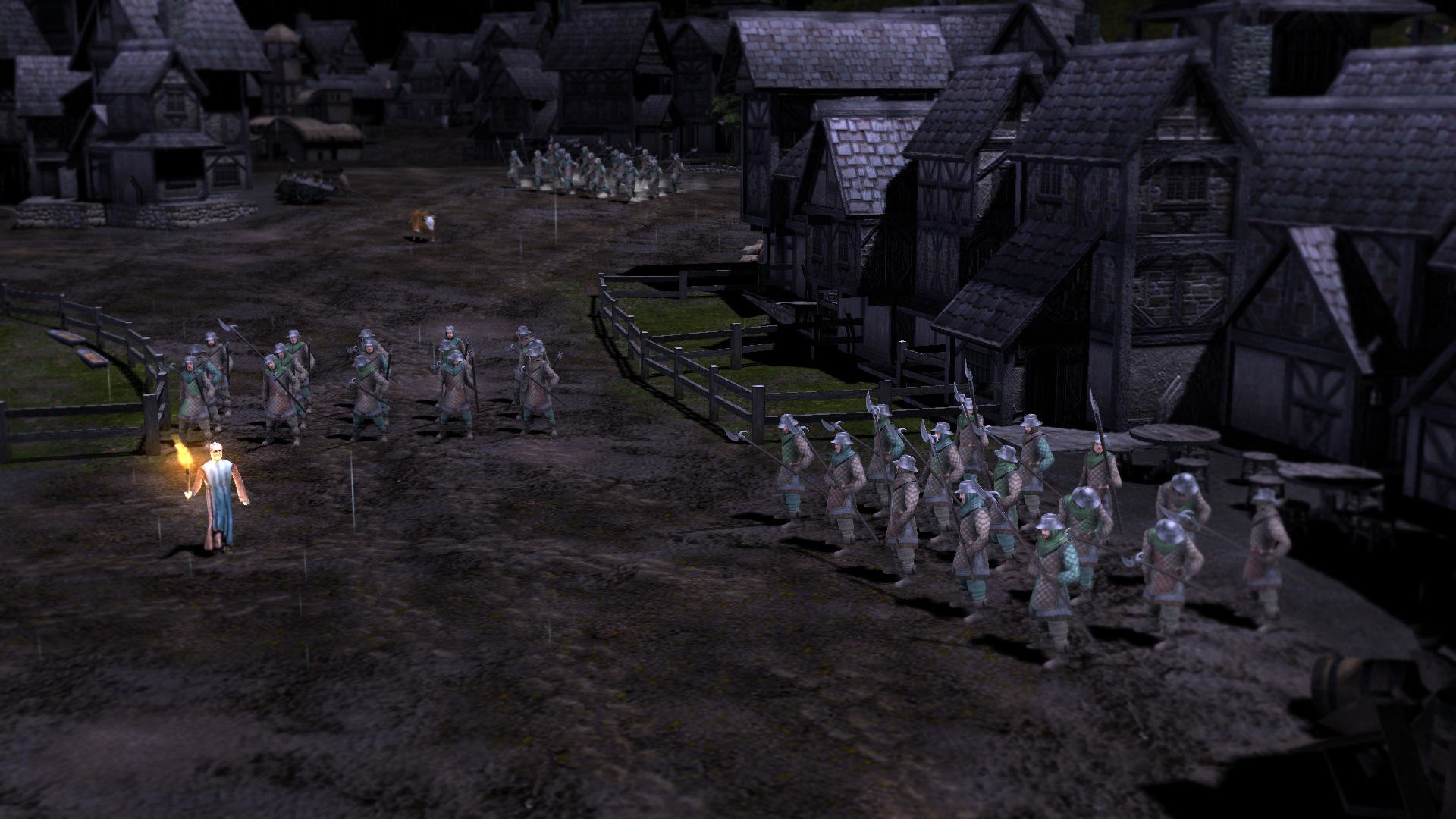 Though peaceful and mostly undisturbed thanks to the efforts of the Dúnedain rangers, the Bree-land still maintained a small militia of volunteers. The Bree-land Townsguard patrolled the little country roads and fields that connected the towns of Combe, Archet and the larger Bree, settling disputes and prosecuting crimes that were mostly petty in nature.

In Age of the Ring, the Bree-land Townsguard are an early-game infantry unit, recruited from the Eriador Encampment. Once upgraded with heavy armor, they begin resemble what King Elessar's future townsguard might look like... 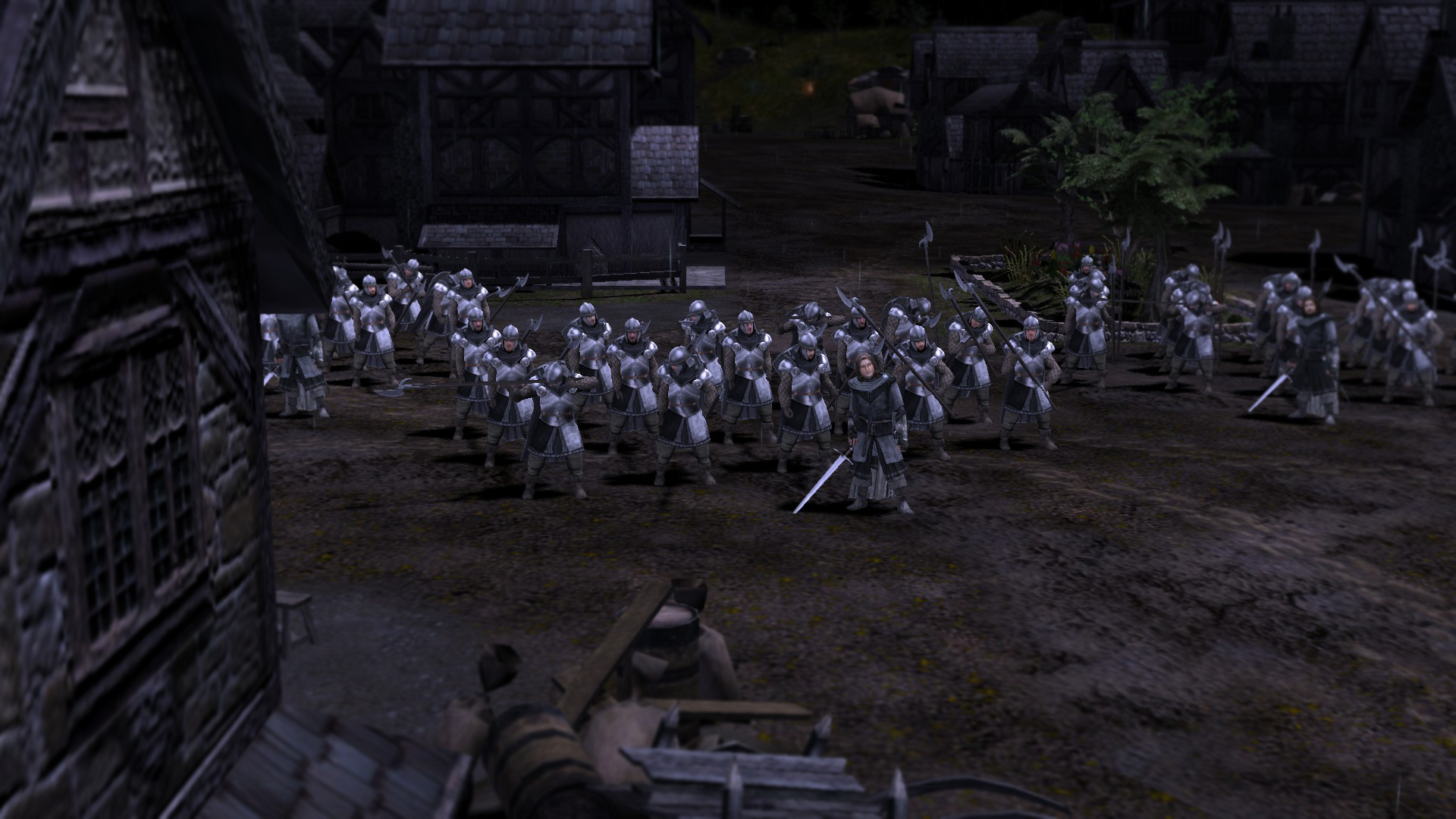 Exhibit B: The Hobbits of the Shire 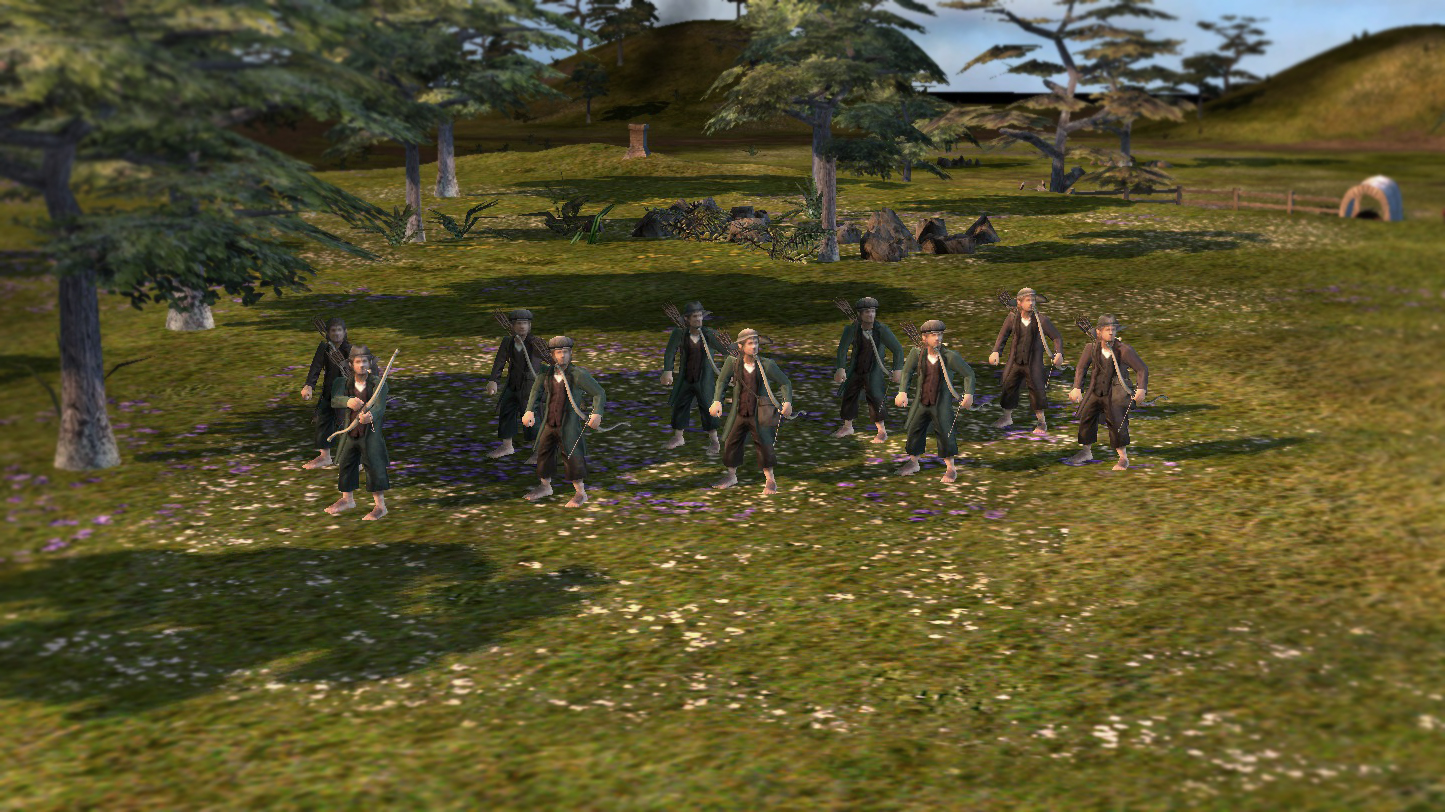 It is a common tendency in Men to underestimate Hobbits - mostly due to their small size, rosey cheeks, and soft-spoken tongue. Few realize, however, that their peaceful exterior is underpinned by an interior most hardy and unwavering. Hobbits possess great reserves of courage, and a natural resistance to the corrupting influence of Sauron and his minions. It is no coincidence that Gandalf felt Bilbo Baggins might be instrumental in reclaiming the Lonely Mountain, and neither can Frodo's resistance to the Ring's evil be chalked up to chance.

In Age of the Ring, Hobbits are well represented. Took Archers, inspired by the Hobbits' natural skill at marksmanship and the Took family's inclination for un-hobbit-like, adventurous activities. Bounders, the Shire's modest policing force that was greatly expanded during the War of the Ring and kept very busy safeguarding their borders. The Shirrifs of the Shire are also represented as banner carriers for the Hobbit units. Additionally, Farmer Maggot and Fatty Bolger can also be recruited from the Eriador Encampment. 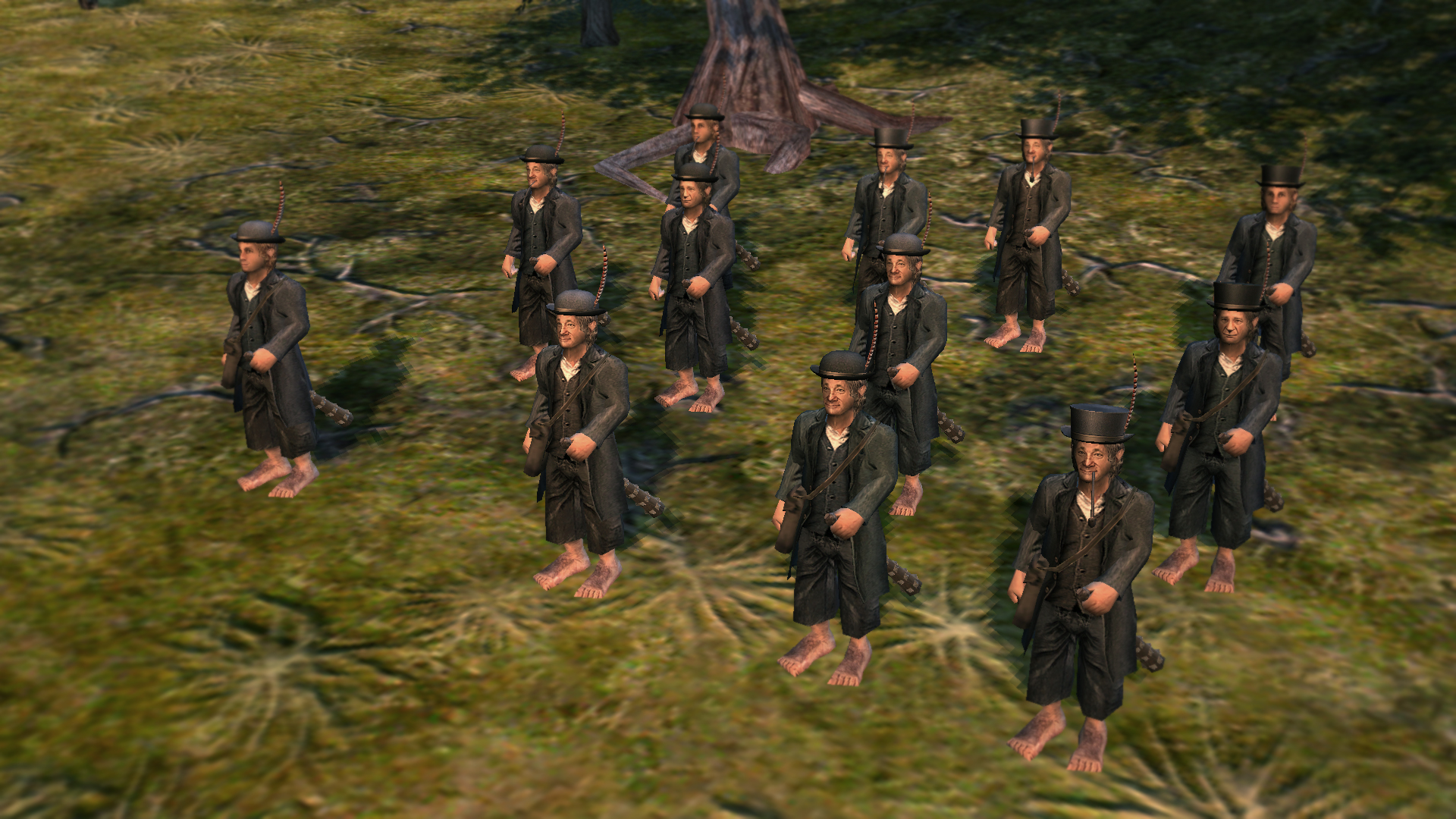 Took Archers are deadly archers with relatively low armor, capable of quickly dealing a lot of damage from a limited range. Bounders are a basic infantry unit with additional damage versus heroes and a rock throw toggle. Farmer Maggot is protected by his large dogs and can summon his farm to temporarily boost resource gain. Fatty Bolger can sound the Horn of Buckland, temporarily decreasing recruitment times for all Hobbit units. 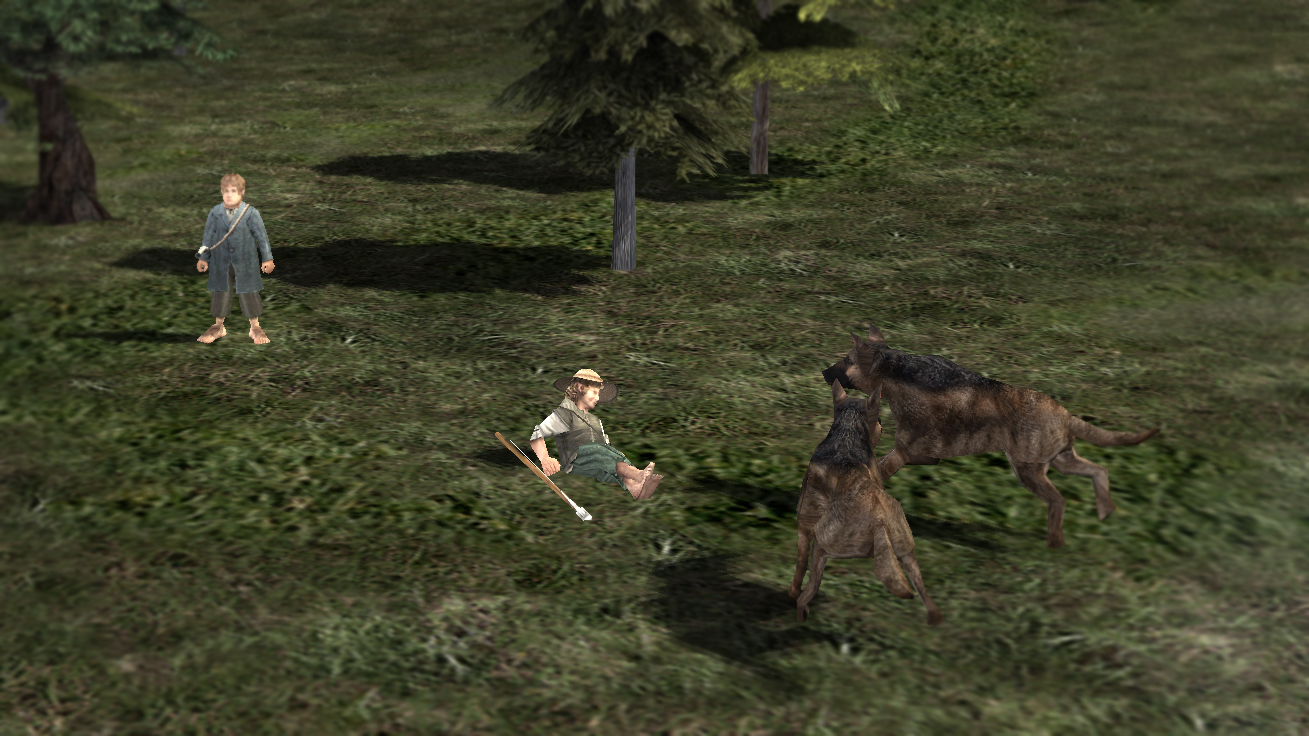 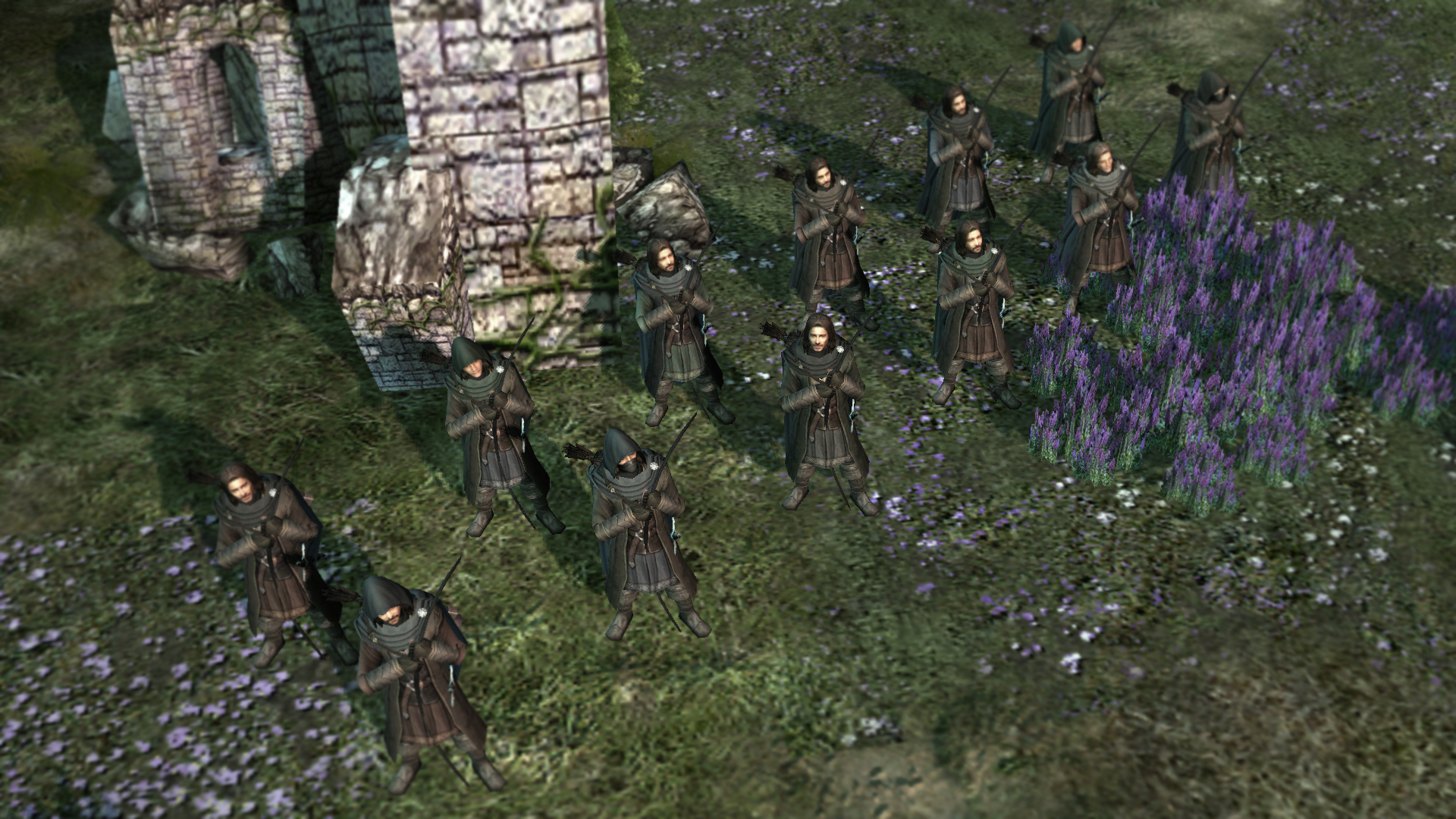 "Peace and freedom, do you say? The North would have known them little but for us. Fear would have destroyed them. But when dark things come from the houseless hills, or creep from sunless woods, they fly from us. What roads would any dare to tread, what safety would there be in quiet lands, or in the homes of simple men at night, if the Dúnedain were asleep, or were all gone into the grave?" ~ Aragorn II, Chieftain of the Dúnedain

The Dúnedain play a central part in the Rivendell faction, being both specialists and the semi-elites that bridge the gap between Hobbits and Bree-landers to the powerful but expensive Elf units. They are recruited from the Dúnedain Gathering.

Dúnedain Rangers are a highly versatile unit. They are initially recruited as a ranged unit, but for a small price can be instantly and permanently specialized into swordsmen or spearmen. Use them to surprise the enemy, either by attacking from cover or by suddenly specializing them into a counter-attack.

Dúnedain Outriders are a relatively slow but heavy-hitting cavalry unit, capable of hiding in the trees and cloaking themselves on the field, allowing for surprise cavalry attacks. They are Rivendell's only mounted unit prior to the Rivendell Knights. 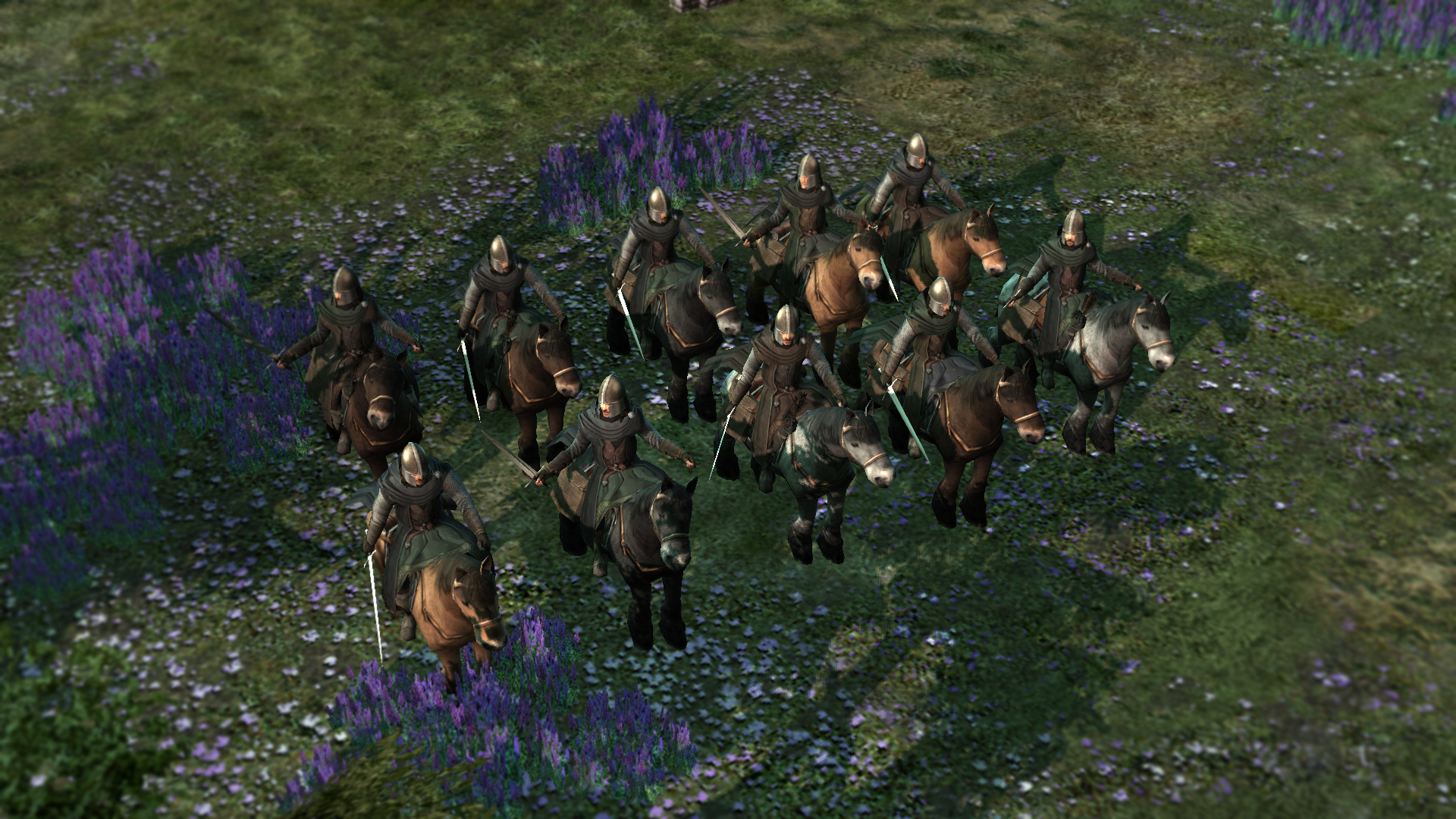 The Grey Company are a hero-like unit that can be recruited from the Dúnedain Gathering after unlocking them from the Library's 'The Lay of Leithian' upgrade. These grim-faced warriors are based on the group of rangers that was gathered to travel south to Aragorn's aid during the War of the Ring. They can toggle between bow and spear, and possess several special powers: Silent Defenders, which strengthens Dúnedain heroes, Skilled Hunters, which can be used to target an enemy hero or unit to see through their eyes and make them more vulnerable to Dúnedain attacks, and Grim Resolve, which further empowers the Grey Company battalion when one of its members falls in battle. 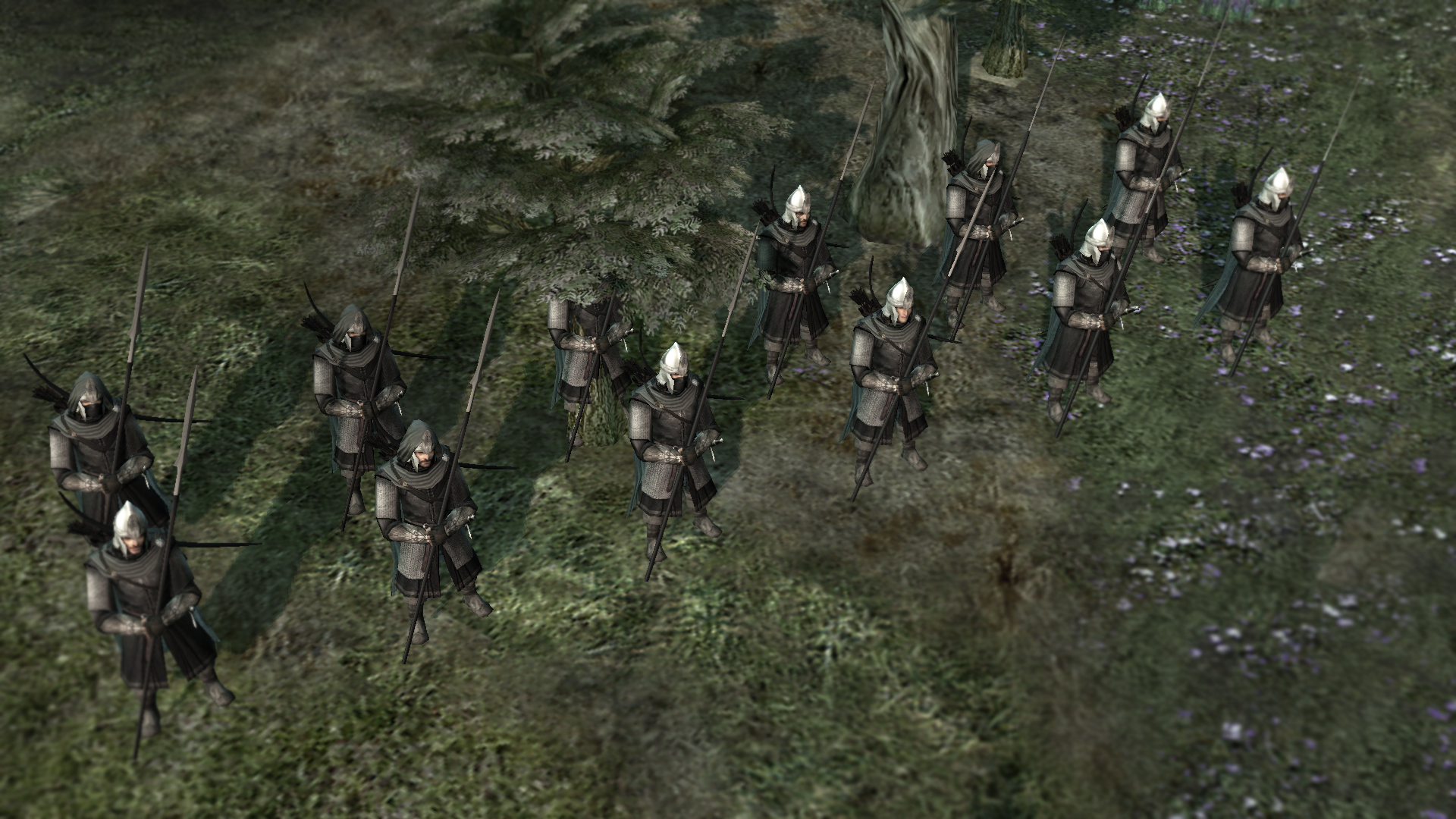 Additionally, the Dúnedain Gathering can recruit the Sons of Elrond, provided the required Spellbook power is purchased... 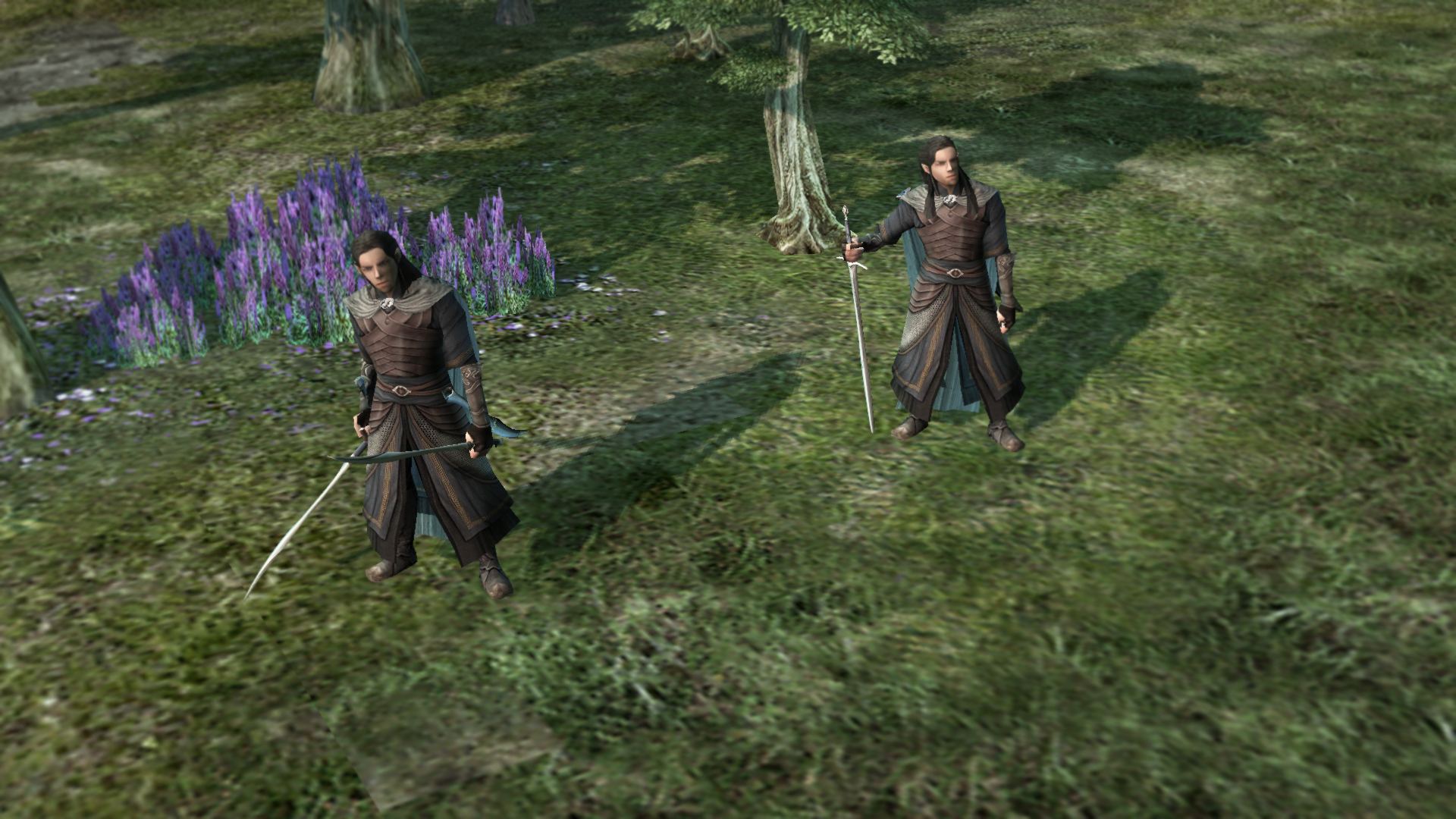 Exhibit D: The Elves of Rivendell 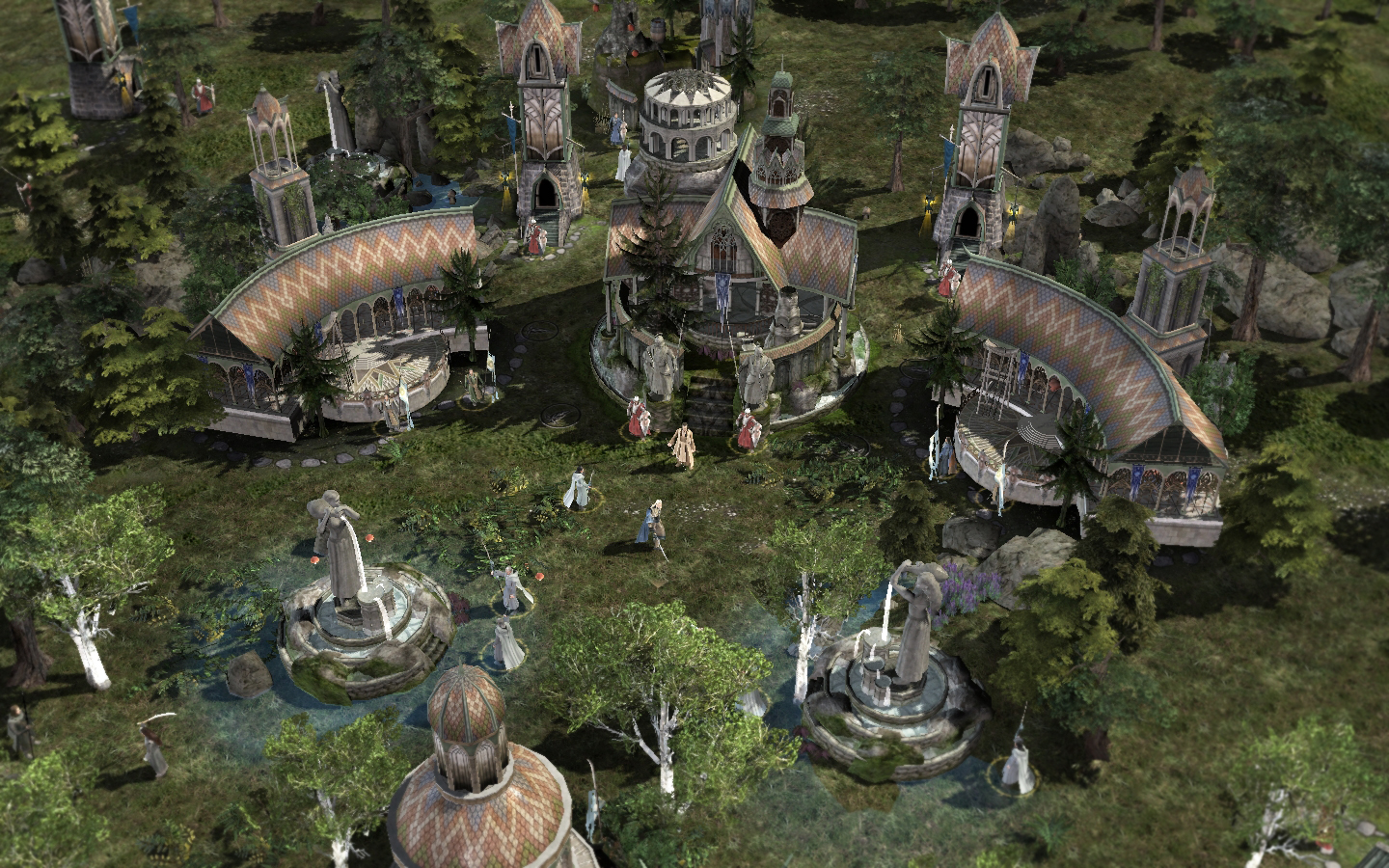 Though not numerous enough to be considered an army, the Elves of Rivendell did have many great warriors amongst them. These warriors make up the backbone of the Rivendell faction, and are among the most powerful units in Age of the Ring. They are expensive and difficult to recruit, but come with a full roster of roles: Glaivesmen, Swordsmen, Archers, mounted Knights, and Rivendell's hero unit: Veterans of the Last Alliance - indisputably the most powerful unit in the mod. 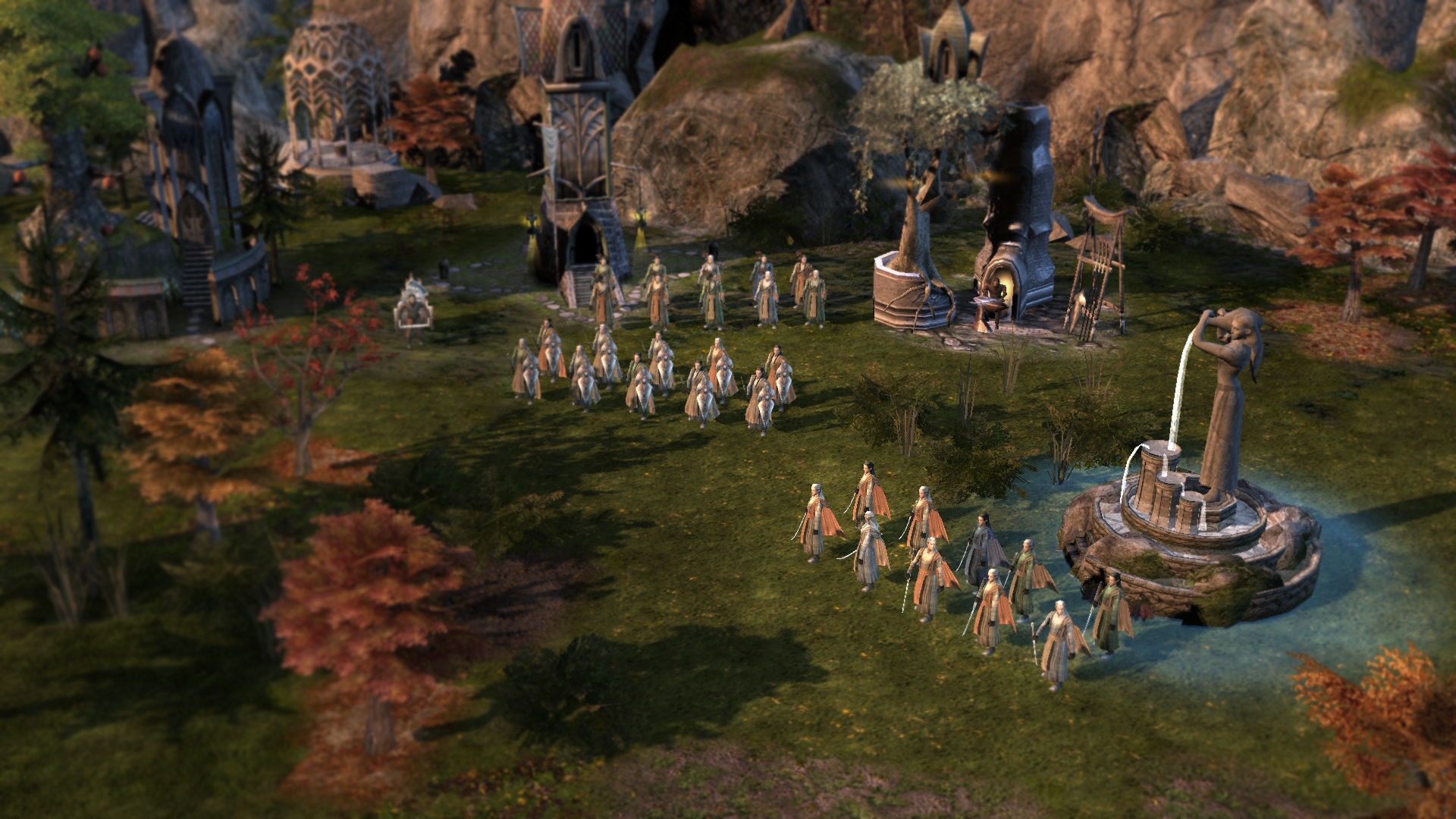 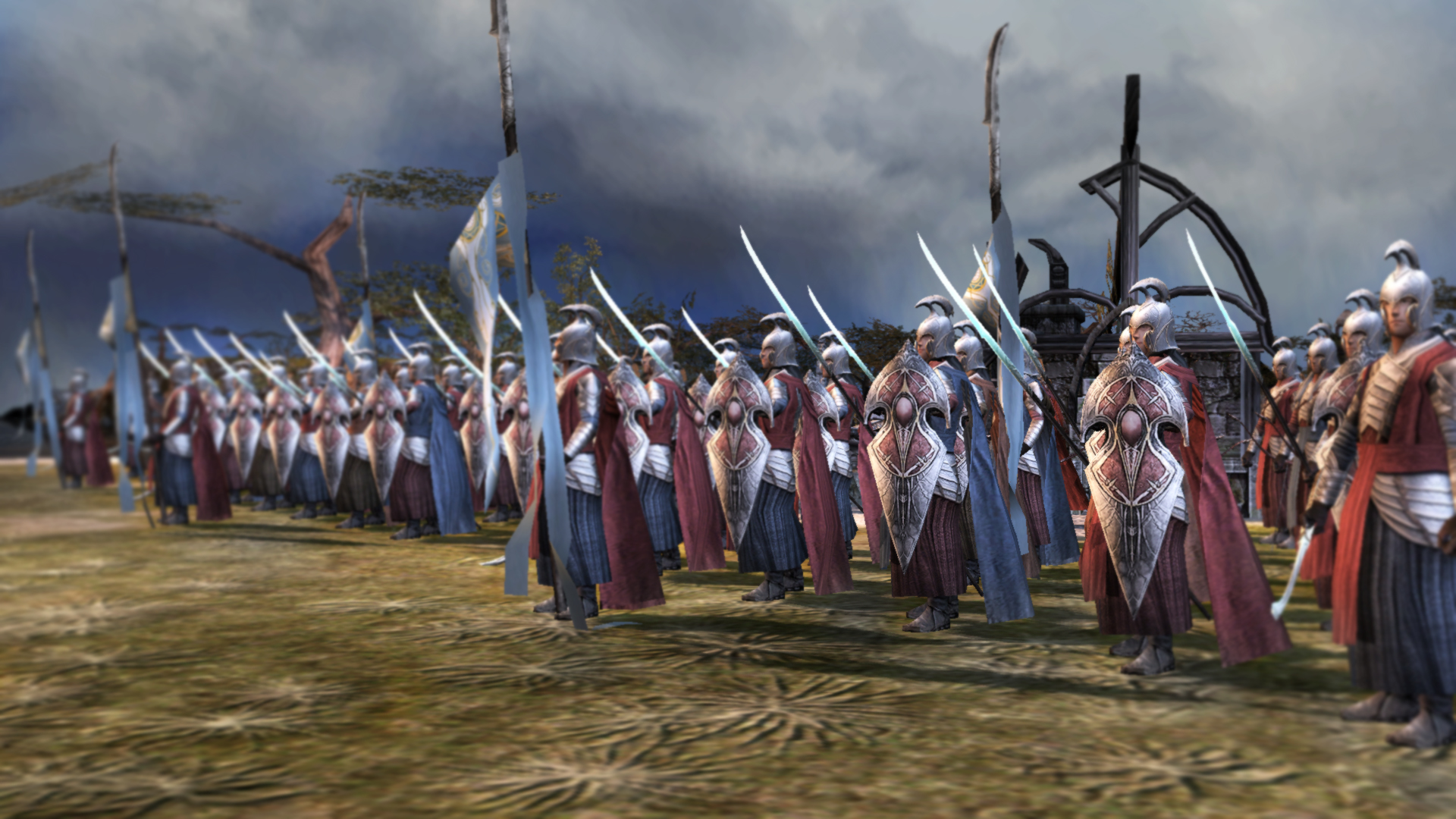 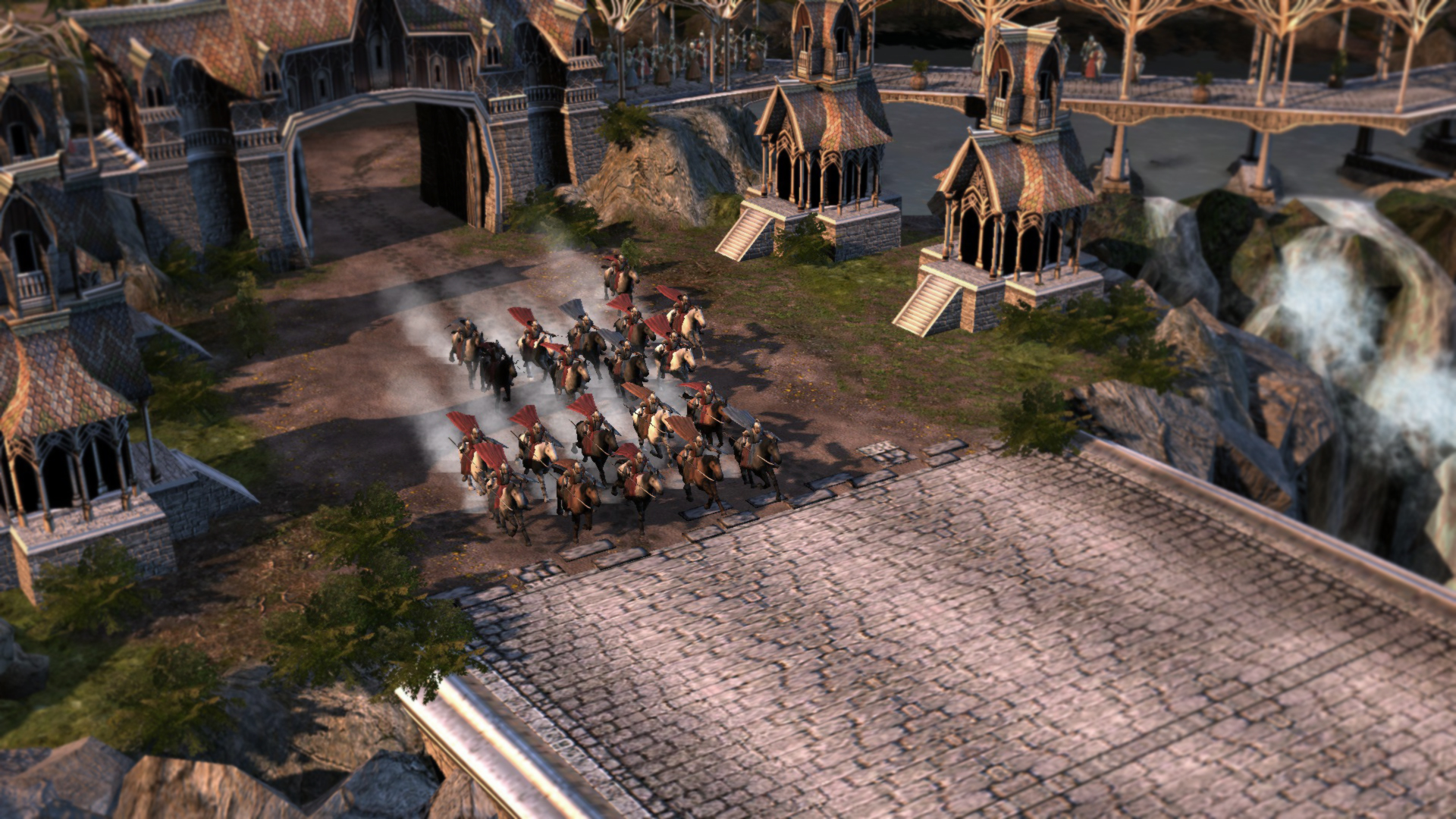 The Veterans of the Last Alliance come with a full set of powers, based on their experience gained during the various wars they have been a part of: The Siege of Eregion, increasing their resistance to knockback and fear, the War of the Last Alliance, which grants armor bonuses to nearby Mannish units and damage to nearby elf units, and the Fall of Angmar, which increases their own melee damage, adding a siege damage component and increasing their ranged attack speed. 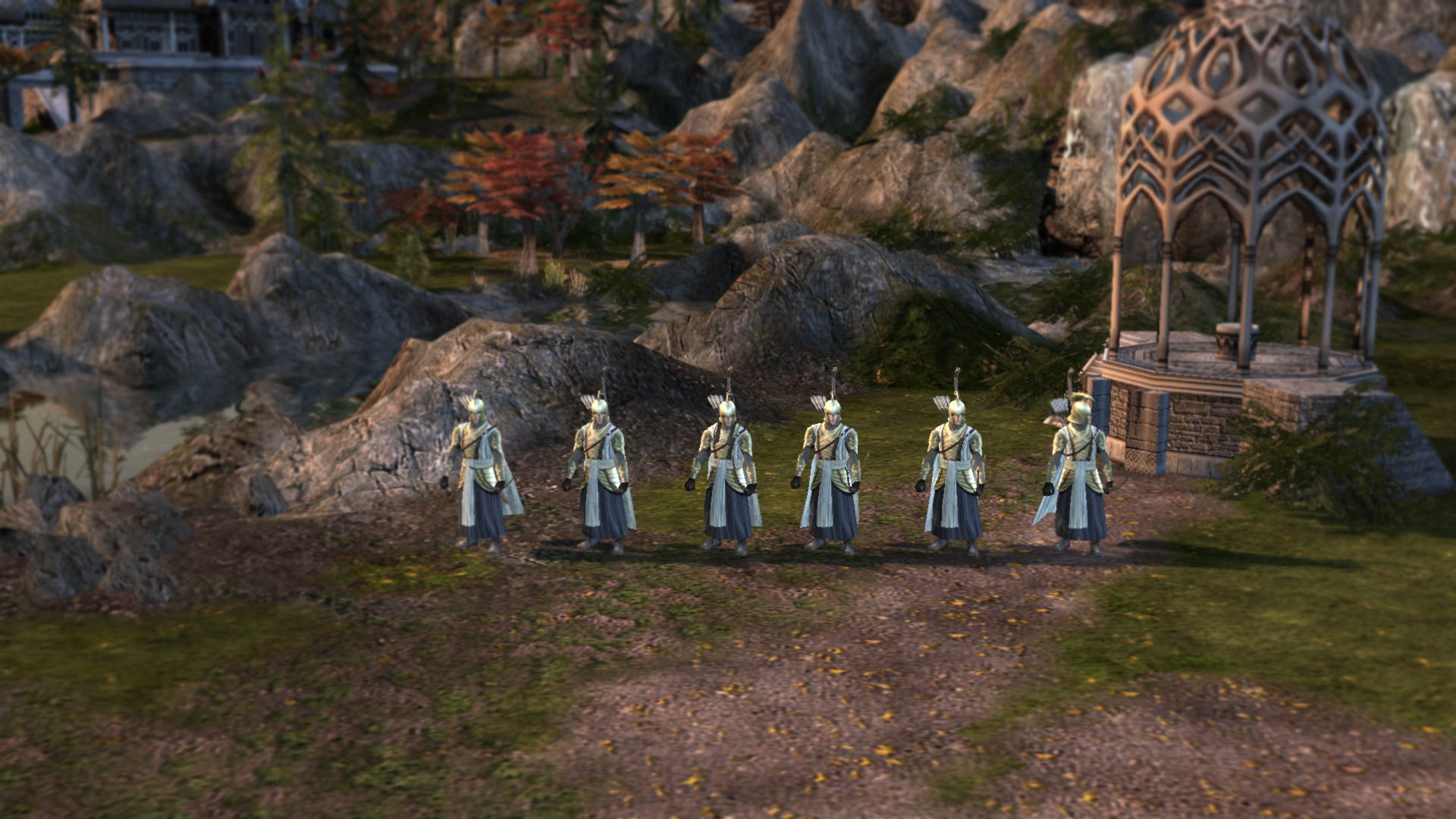 That's it for this article. Expect more to come, either during or after the Mod of the Year awards - on both Rivendell and Rohan, the factions that will be in our next release.

Definitely the most unique take on an Elven faction I've seen.

Never underestimate the wrath of a Took!
...or a Baggins, or a Proudfoot, or a Brandybuck, or any hobbit for that matter lol

wow this just amazing can t wait for the next release

wait, "Factions that will be in our next release"... are they both being added in the next update? :O

I love this concept I hope it will be a christmas present for Us. :)

The release will definitely not happen before Christmas.

Is there a chance that the new version will be released in January?

So far the best article I 've read, very informative and a pleasure to read.

Amazing marketing during the MOTY! You already have my vote! :o)

A pretty solid Imladris concept, but including Bree is definetly rather unique.
And I absolutly love the design of the Bounders.

Well that feels like Imladris...I really can't wait till I get my chance to use them, this is amazing guys, Truly amazing.

nice, but what about the elves cp cost? havent seen it on the forums faction plan

It'll be high. We don't finalize those things until we start beta testing the version.

An awesome take on Rivendell! I love the sub-hero infantry units' special abilities. It looks like you're starting to lean further into asymmetrical faction design, which is something BfME2 has always needed to really shine. That's why the Dwarf release was so impressive to me, and it's awesome to see that you're continuing that trend. Best of luck with Mod of the Year! You have my vote.

I play a lot of local games on a wired router connection. But on 3/5 games we get OOS (out of sync) after a while. I love the new age of the ring mod but it's so hard to play this way. Anyone has a fix for this?﻿

I know, but it still happens a lot. I've tried a lot like a clean windows install, clean lotr bfm2 install etc. but no results so far. Some games work but most of them fail :(

Any tips I can try?

Please report what happens on our Forums at Revora.

Quick question. All ring heroes are amazing. The purpose of Sauron and Smaug is quite clear but what is the purpose of Frodo?

To make your army nearly invincible (huge leadership with a large radius).

Could someone PM me on how to download the original game?