DTA version 1.19 was just released and it is a BIG one, bringing massive gameplay changes including faction reworks, many new units, and overhauls to some existing ones. Along with all this exciting new stuff is also a bunch of content, assets, and more.

It has been a great year for Dawn of the Tiberium Age! A LOT has been going on both within the community, and behind the scenes. DTA's official Discord server has opened to the public, and we have seen a surge in online games.
The development team have lately been teasing some of what we've been up to for the past year-and-a-half, and are now ready to release 1.19 in all its glory. This patch features big reworks, as well as new content and technical improvements. Let's first take a look at the new unit rosters:

One of the big catalysts for our changes to the Allies was our desire to improve upon the Chrono Tank mechanically, making it much more user-friendly and letting it continually teleport. Doing away with the deploy logic also means its build limit is now properly enforced. To boot, it has a cool new weapon that uses weaponized chrono tech to essentially take apart its target.

We know some players liked utilizing multiple Chrono Tanks as fire-supporters, and we wanted to expand upon the somewhat limited Allied roster. The Tank Destroyer is unique in being sort of a hybrid unit, it's more sturdy than most fire supporters, but has a price to match. 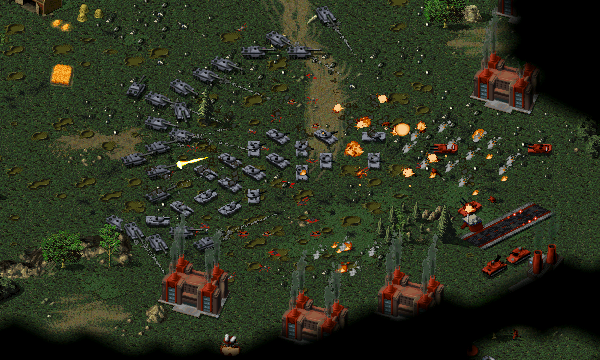 The new Allied epic unit. A rolling fortress holding heavy MG positions and rocket troopers inside its massive armour. Its damage isn't very powerful, but it has the highest health in the game so it will take a lot of power simply to outlast it. It can also deploy, opening up the back compartment into a fully functional barracks. 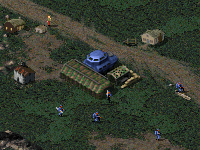 We thought it was a bit uninteresting that 3/4 factions had the same superweapon. So with that, the Allies now use the chronosphere to spawn a chrono vortex, inspired by the phenomenon in Red Alert 1, to deal gradual damage in a huge area.

The Longbow is now also considerably stronger. All in all, the Allies have more tactical options and a more diverse unit roster in 1.19, and can excell at both sneak attacks, but also at forming a powerful army.

While GDI's army is very solid and versatile in a fight, the short range and inaccuracy of their MLRS meant they struggled to handle fortified positions that included counter-artillery.
The Disc Launcher is their new dedicated artillery. It magnetically propels explosive discs that hit the first target they reach. Being more advanced than standard artillery, they require the tech center and are a little pricier. 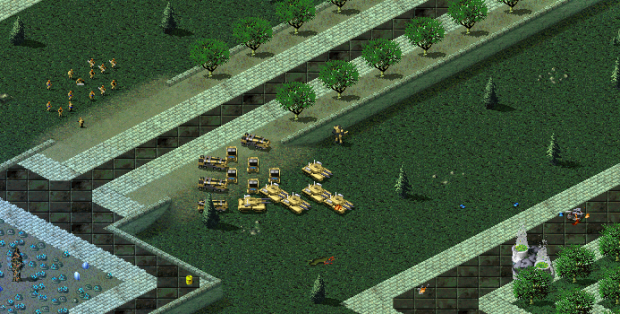 We have also given some love to two of GDI's most iconic units: the Grenadier and Orca. GDI much like the Allies should now have more viable tactical options.

The Termite has been removed as a buildable unit, as the subterranean logic was needed to make the new chrono tank work. The unit itself was seldom useful and didn't really have a place within the game due to being almost impossible to balance.

The Microwave Tank was too situational, and synergized poorly with the rest of Nod's arsenal. Instead, it is now a laser based fire-support unit. Its strength lies in its versatile damage type and ability to drive away and shoot at an enemy simultaneously. Its gradual damage may not seem powerful at first, but a few can quickly melt any target they focus on. 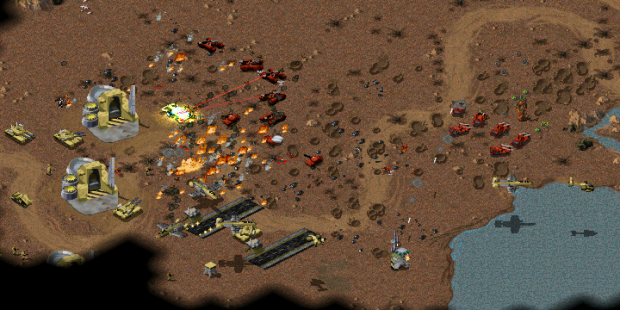 We have received some feedback that fans found it too lore-breaking to have an infantry carrying a laser in the TD era. The Cyborg now has a new weapon unique to him, pneumatically propelling unstable tiberium shards that explode into a cloud of tiberium gas.
We also gave him more hitpoints so he's stronger in direct combat.

The SSM will now be the standard Nod artillery unit for two reasons: the epic SSM was too mundane for an epic unit and its gameplay wasn't good for balance, and we wanted Nod to be more unique and not share a unit with another faction.

This unit has always struggled to find its place, and rather than just giving it absurdly high stats to compensate for its shortcomings, we decided to give it a cool new animation that also allows us to give it just a little bit of a higher range, as well as make a damage buff be more in line with its visuals.

Nod's new epic unit, built with secret knowledge from the Tacitus. It fires a giant ball of plasma so powerful it sends out deadly arcs of energy around it as it flies, and explodes for area-of-effect damage. Its strength dissipates the longer it goes though, so the user has a choice between a safer range and maximum rip-and-tear.

Nod's early game recon armies were found to be vastly overperforming, and so we have given bike/buggy some stats decreases.

With a tech center that now offers more of an increase in power instead of only situational ambush units, and a balanced early game with a stronger late game, Nod's power progression should now be much more steady and offer more variation in playstyles.

While we haven't given the Soviet any new tech as we think their roster is already quite big and varied, we have taken some balancing steps to also give them more viable choices and help them survive expanding onto the map better.
We did give Volkov a unique new weapon; a Gyrojet rifle shooting rocket-propelled bullets. His damage is the same overall but he fires a little faster, so kiting with him now takes more effort.

Artillery combat is receiving a bit of an overhaul in 1.19. The Soviet V2 has been re-balanced and artillery recieved a buff to their hit points, so V2's no longer obliterate entire groups of enemy artillery with one shot. In turn, artillery now doesn't kill groups of infantry quite as quickly, so it shouldn't invalidate their use the same way. GDI's new Disc Launcher gives them the option of using counter-artillery.

We are removing the feature of defenses expanding a player's build radius as it gave a huge bias towards long-ranged defenses. Crawling both for expansion, allowing coverage of an area far from one's base, and worst of all crawling towards an enemy's artillery faster than they could destroy the defenses contributed to artillery being underutilized, and certain factions over-performing. Many players also felt that it was a cheap and boring tactic.
Plus some of us still remember the Night of the Obelisks...

1.19 also contains a bunch of smaller yet significant balance improvements to existing units, and you can of course find the exact details on these in the changelog.
Furthermore we would like to ensure the community that we ARE working on improving naval balance and are already actively testing new solutions, but felt that was better left to its own release.

With 1.19 we are also releasing both new maps, missions and mapping assets. The multiplayer maps are:

As well as the co-op mission Nuclear Winter, an action-packed mission with lots of explosions and mixed factions.

And the single-player mission A Bridge Too Few, that will hopefully teach novice players a few new tricks.

Mappers will find some new stuff in the editor, including assets to make bridges look *much* more decorative, some decorative details like shooting range targets and traffic cones, as well as a few interior assets made compatible with the desert theater.

Finally, we would just like to thank all of our players for your continued support and interest in DTA! While we are excited for the release of the TD and RA1 remasters, we feel DTA with its tons of unique units, hundreds of maps, exclusive missions, as well as improved balance, still holds its own and offers something entirely unique. The TS engine still holds options for us that even the remasters couldn't provide, including our Co-Op missions. We hope you fans feel the same way, and DTA will live on as long as people continue to play it!

If you don't have Dawn of the Tiberium Age installed already you can get it from the download page now! And if you do already have it installed, just run the client and let the auto-updater do its thing. See you soon!

What was the "Night of the Obelisks"?

An absolutely insane free-for-all where Rampastring got hold of enough resources to set up several MCV's and literally crawl from his base to everyone else with nothing but obelisks and overwhelm them. The map was just pink and you couldn't go anywhere, it was madness.

Good update! Will have to get back on and play with friends.

oh no, a reason to update from winter patch!

so no more Nukes for Allies and no MLRS for GDI?
kinda shame

Oh GDI still have their MLRS, the only outright removed unit was the Termite. GDI can now form a powerful 3-layer army of tanks in front, MLRS fire-support and Disc Launchers in back.

I just have three questions/sugestions:

1) Does it make any sense to be able to build a stationary sensory array, as well as a mobile version?

3) Given how buff Volkov and the Nod Cyborg are, wouldn't it maybe make sense to up the build limit of the GDI Commando and Tanya from 1 to 3? Or does this mess with the balance?

Otherwise, perfect. Don't deviate too much from this version. xD

1) The built-as-a-structure sensor array can be undeployed too, so aside from the production method, cost and it being pre-deployed, there is no difference between the buildable sensor arrays. The pre-deployed sensor array was mostly added to make infantry-only gameplay style more viable and stealth attacks less all-or-nothing, especially in team games.

2) It works as an area-denial weapon, can be used to wipe out some artillery or cause constant damage to a structure, which you can then finish off with something else. Balancing is a never-ending process though, so if we feel that it's weak, we can buff it in the future.

3) Volkov and Cyborg are epic units, GDI and Allies have their own counterparts to them (X-O and A-10s, Enforcer and Chrono tank). Commando and Tanya are separate. Upping their build limit would mess with the balance, too; even one of them is excellent at slaughtering enemy infantry, and if you could build multiple of them, APC / Chinook + C4 dmolition cheese would become a lot more prevalent.